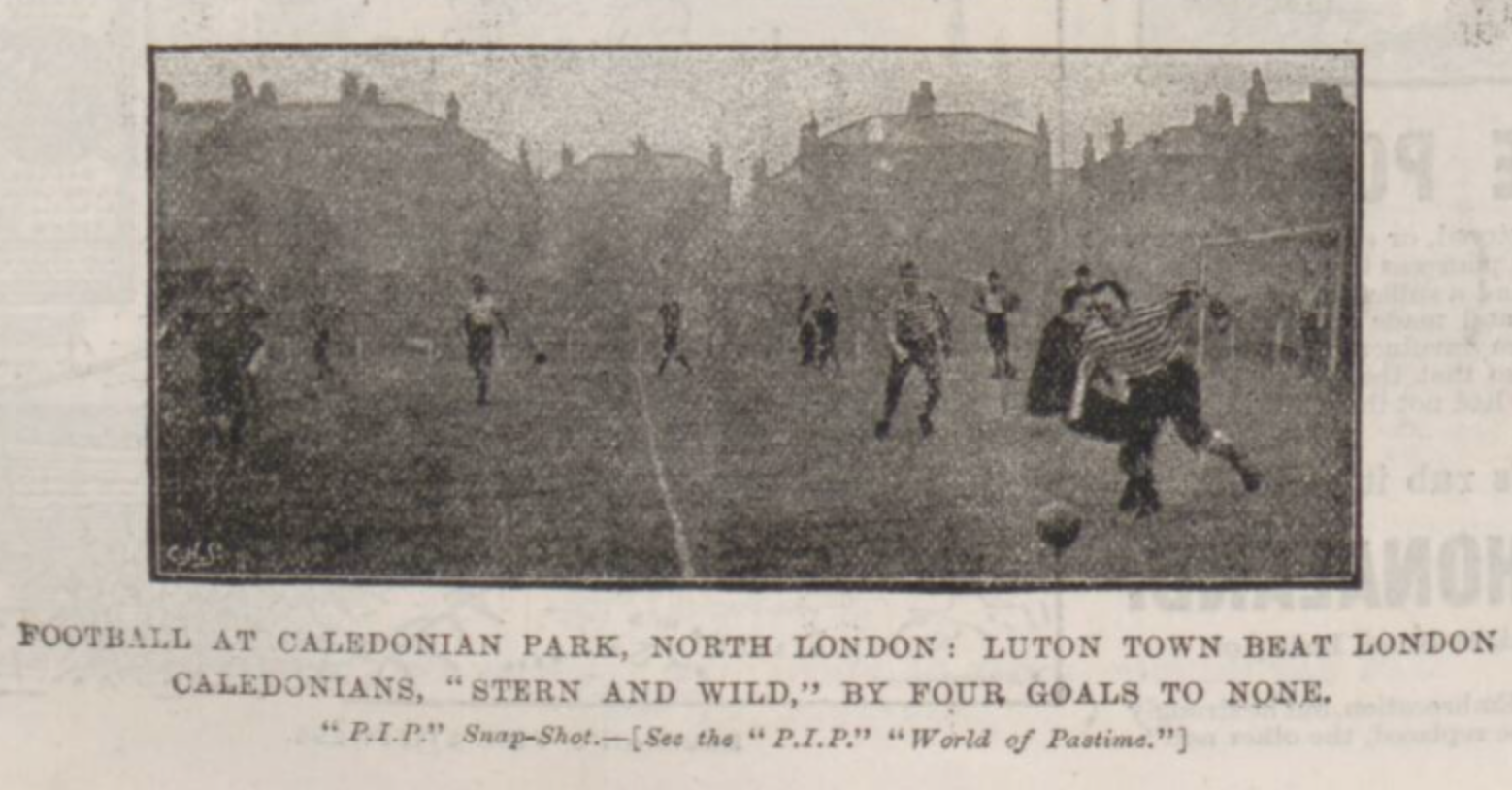 For years newspapers were hostile to the game of football seeing it as a threat to the national game of cricket.  They seized upon football reports detailing broken bones and the occasional death to demonise the game.  “If it bleeds it leads” was the motto then as now.  It took many years for newspapers to realise that football was a popular sport and there to stay.  Good football coverage meant extra sales and revenue.  So instead of attacking football as a brutal sport they decided to support football and many adopted editorial columns which contained views on games, the rules, fans, the wider football world, humour and so on.  They were written by the Sports Editor under pseudonyms such as “Shooter,” “Kicker,” “Free Critic,” “Rover” and “Onlooker.”  This is my column.

The articles are in a random order and in bite sized chunks.

We associate ground closures with the usual suspects but I can exclusively reveal that Luton Town’s ground was closed due to crowd trouble.  This event has never been documented before in any books.

On the 14th January 1899, the Straw Plaiters met Leicester Fosse at the Dunstable Road ground.  The referee was Arthur Kingscott, photo attached.  The game started with controversy when King scored for the visitors when all believed he was offside.  The Luton Reporter stated that –

“even the grand-stand occupants were roused from their wonted calmness and in outspoken terms denounced the decision, one gentleman being heard to observe that it was the worst he had ever witnessed on the ground.”

One gentleman did support the ref by saying the ball came off a Luton player on its way to King thereby making it a legal goal.  His view was in the minority and there was much booing and hooting.

“Excited cries were heard from all parts of the pitch and the game was carried on for some time amid a loud outburst of hooting and yelling which must have disconcerted referee and players alike.

“the crowd was thoroughly roused and many objargative utterances were made concerning the whistle-holder.  So demonstrative indeed, were the members of the crowd at the Farm end that Mr Kingscott suspended operations for a minute or two while he went among the spectators and remonstrated.  This had little or no effect, and a running fire of execration had to be borne by the referee.”

The game ended in a 6 1 victory for Leicester which didn’t help the mood of the fans.

“At the close the referee was subjected to a hostile reception.  Some hundreds of excited beings congregated at the dressing room end of the ground and as Mr Kingscott made his way towards the room he was loudly hooted, the mob surging threateningly around him.  The police, the local executive and some other common-sense folks surrounded the referee and protected him from the violence which would no doubt would otherwise have been used towards him.  Mr Kingscott was apparently unconcerned, and he took the execration smilingly.  All the same it was an anxious time for those who realised what the closing of the ground would have meant for the club.”

The Luton Reporter concluded that as the referee escaped “scatheless” there would be no bad report by him.

However, the referee did report the club and we had form in this respect.  The first Southern League match in 1894 saw the referee, Nat Whittaker, mobbed at the end of the game for incompetence.  We were not punished on that occasion which is surprising because Mr Whittaker was the Secretary of the Southern League.  In respect of Mr Kingscott we were not so fortunate and the F.A. ordered that the ground be closed for two weeks from the 18th February 1899.  As the club were away for two games in that fortnight, only Kettering at home had to be cancelled.

That is not the last we hear of the referee, Arthur Kingscott.  While refereeing the 1901 F.A. Cup Final the goalkeeper was charged by a forward and the ball went behind. The linesman, well up with play, flagged for a corner.  However Mr Kingscott, to everyone’s astonishment, awarded a goal saying the ball had crossed the line when the keeper caught it.  As he was a long way down field he was asked to consult his linesman, but refused.