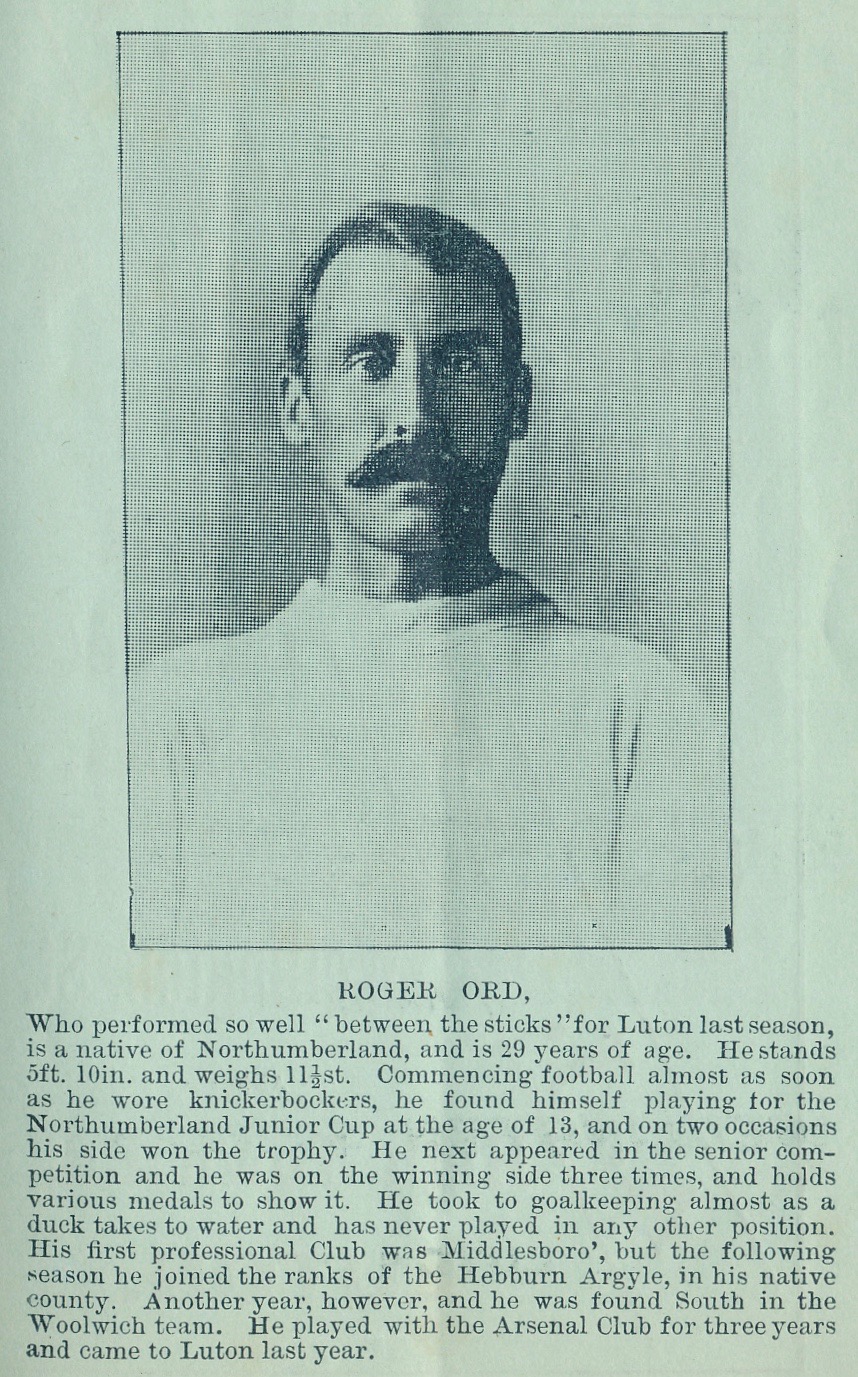 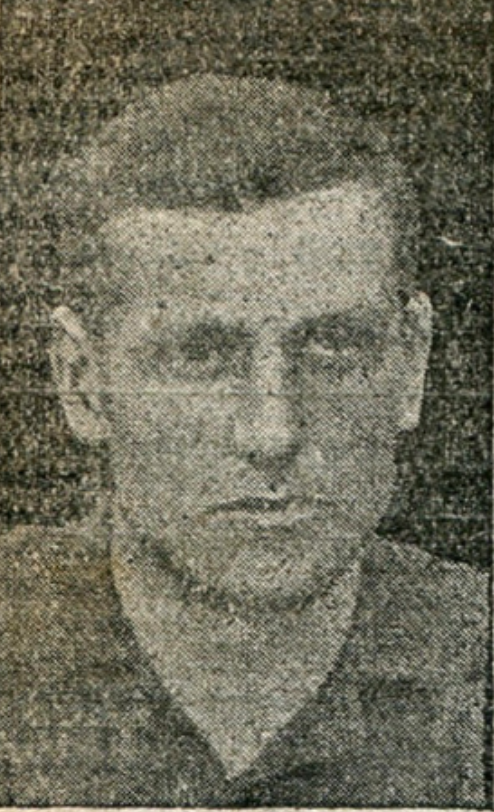 Signed from Rotherham Town in 1894 and played 11 times for the Straw Plaiters scoring 5 goals.  He left for Blackpool after one season. 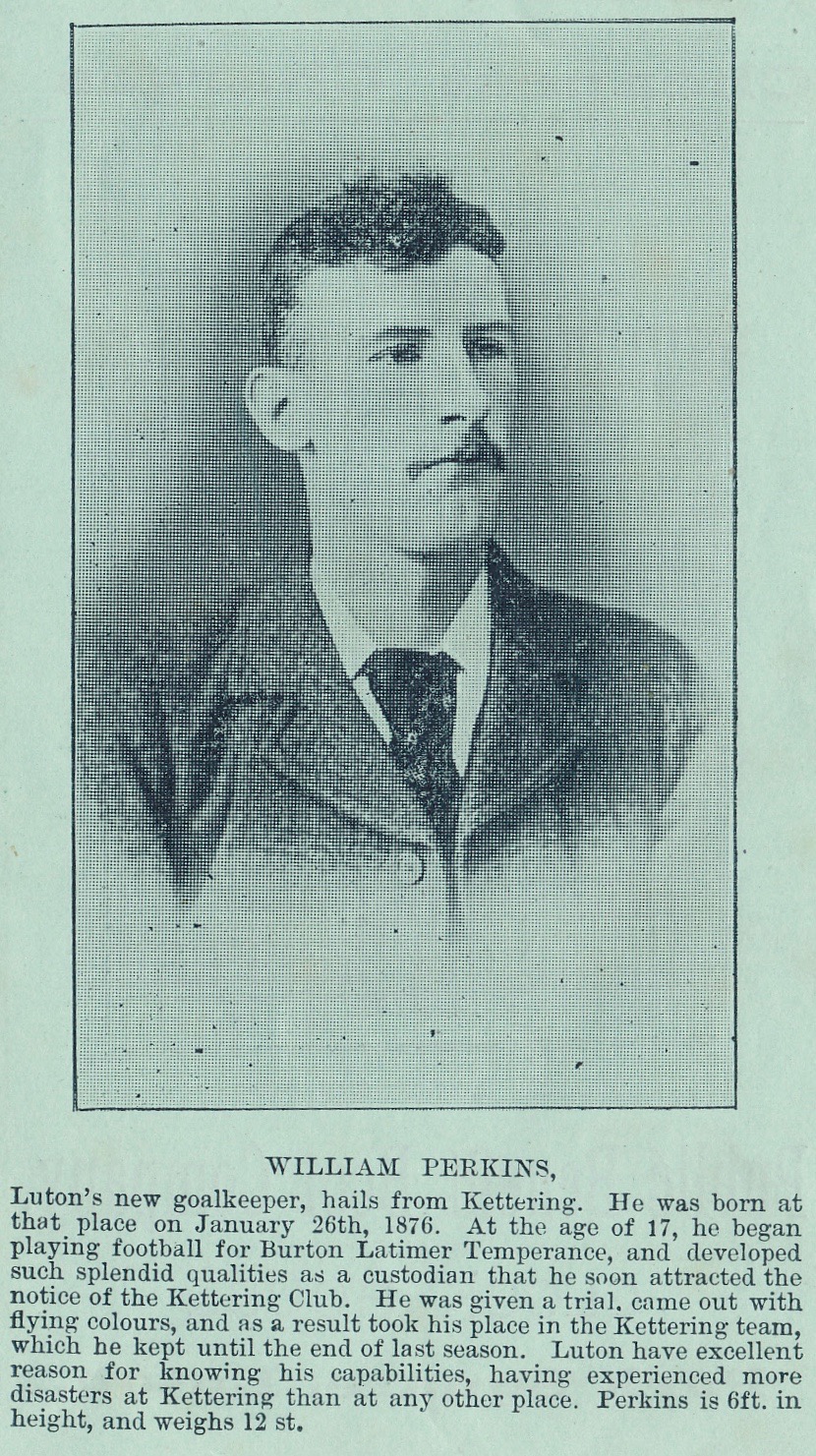 Frank Pitkin was born in Luton in 1861 and initially lived at 62 Albert Road.  In 1871 his mother and father are described as Straw Hat Manufacturers and the family had moved to 88 Chapel Street.  His father died in 1879 and by 1881 the family were at 23 Guildford Street.  Frank was a solicitor’s clerk and his mother was a still a Straw Hat Manufacturer.  Two servants lived with them.  Frank worked from 1883 to 1888 with the solicitor George Bailey of 5 Union Street, Luton.   He was clearly a gifted administrator as he served on the committees of Excelsior, Wanderers and Luton Town until 1893 when illness prevented any further participation.  His legal knowl 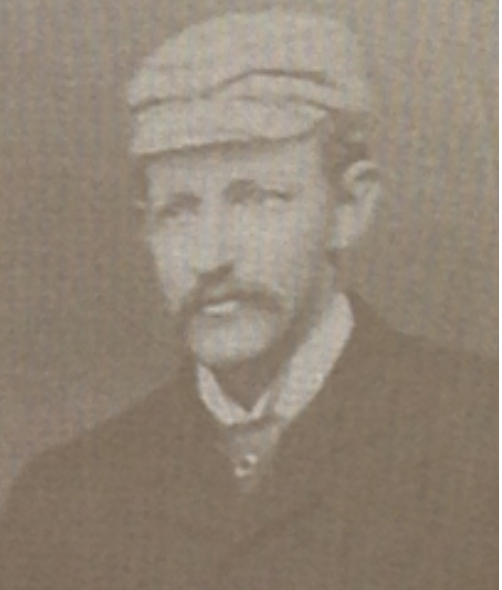 edge would also have been invaluable to the clubs he served.  He also acted as umpire/lineman and referee on numerous occasions.

The 1891 census shows him married to Bessie (nee Davis) with three children and a servant living at 3 Manchester Street.  His occupation is Solicitors Clerk and Deputy Superintendent Registrar.  Two more children followed but Frank, who passed away in late 1895, did not see his fifth child, who was born after his death and named after him.

“Sad death of Mr Frank Pitkin.- We regret to record the death of Mr Frank Pitkin, which took place under sad and very sudden circumstances at his residence in Crescent-road on Sunday morning.  It appears that Mr Pitkin, who was very friendly with Mr Amos, frequently took a drive on Sunday mornings, and last Sunday was walking from his front door to the carriage when he stumbled, as the result of some seizure.  His wife was watching at the window and at once came out and met her husband returning into the house.  He had a broken blood vessel and blood was already flowing from his mouth.  Dr. Pauli, who had attended him previously, was sent for but death took place before his arrival, the unfortunate man having been unable to utter a word after his seizure.  Mrs Tearle, the wife of the head constable, was fortunately near at hand, and she rendered every assistance to the distracted wife.  Mr Pitkin was 34 years of age and leaves a wife and four children.  The deceased was widely known and everywhere respected in the town.  As a lad he entered the employ of Mr Charles Austin, Clerk to the Luton Magistrates and Registrar of the Luton County Court and afterwards was clerk to Mr George Bailey, solicitors until 1888, when, as that gentleman was gradually relinquishing business, he entered the employ of Mr W. Austin, by his honesty and reliability, he was a very valuable servant.  For some years he attended regularly the meetings of the Guardians and frequently acted as deputy clerk, until increasing business at his office prevented his attendance.  He was well liked by the Guardians and officials of the Union [the Workhouse] and esteemed by all.  Outside his business duties, he had always been connected with various movements in the town in which he took an interest. He was, from boyhood an enthusiastic athlete, was a member of the old Luton Harriers and was an old footballer.  Upon the amalgamation of the Excelsior and Wanderers into the Town Football Club about ten years ago, he was elected secretary, but ill-health prevented him from carrying out the duties for the year.  Mr. I. Smith, the present secretary , finished the season up for him and being selected in his stead.  Since that time, up to a couple of seasons back, Mr Pitkin served loyally on the Committee of the Club, and up to the time of his death, although the state of his health forbade attendance at matches, he took a deep interest in the progress and welfare of the  Club, and was always ready to give his advice upon legal or other matters when it was sought.  He was also a member of the Luton Athletics Club committee and up till about two years ago was a devoted Volunteer, being a sergeant and always acting as orderly clerk when in camp.  He was in addition an energetic worker in connection with the Conservative Club.  The funeral took place this (Thursday) afternoon.” 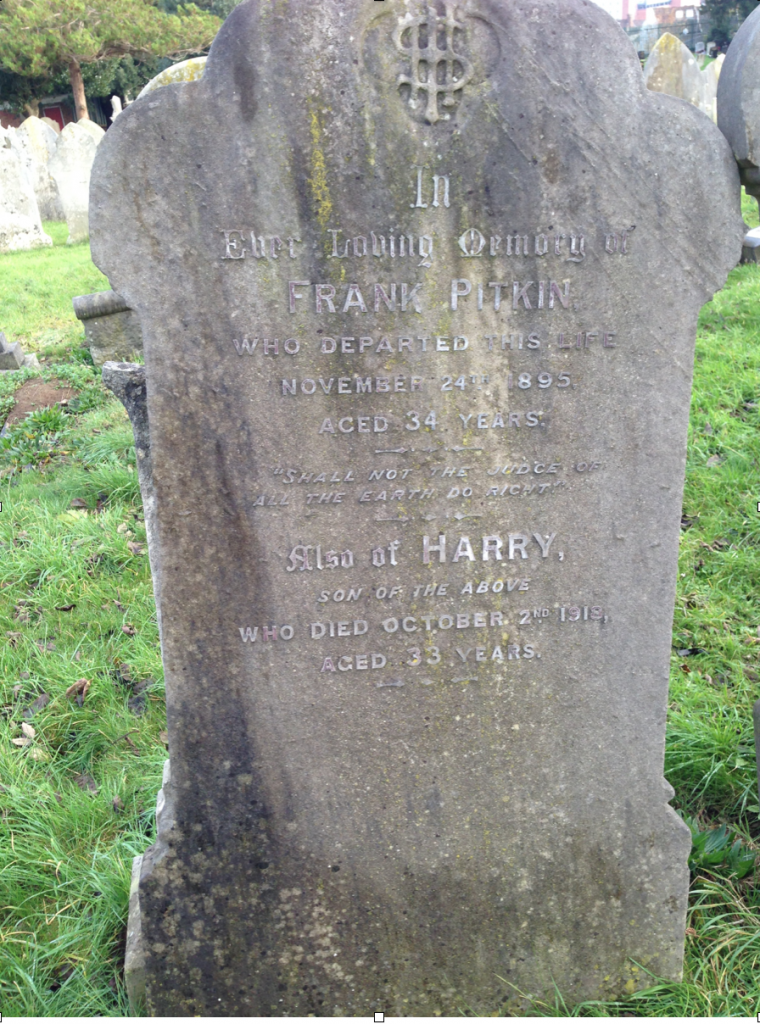 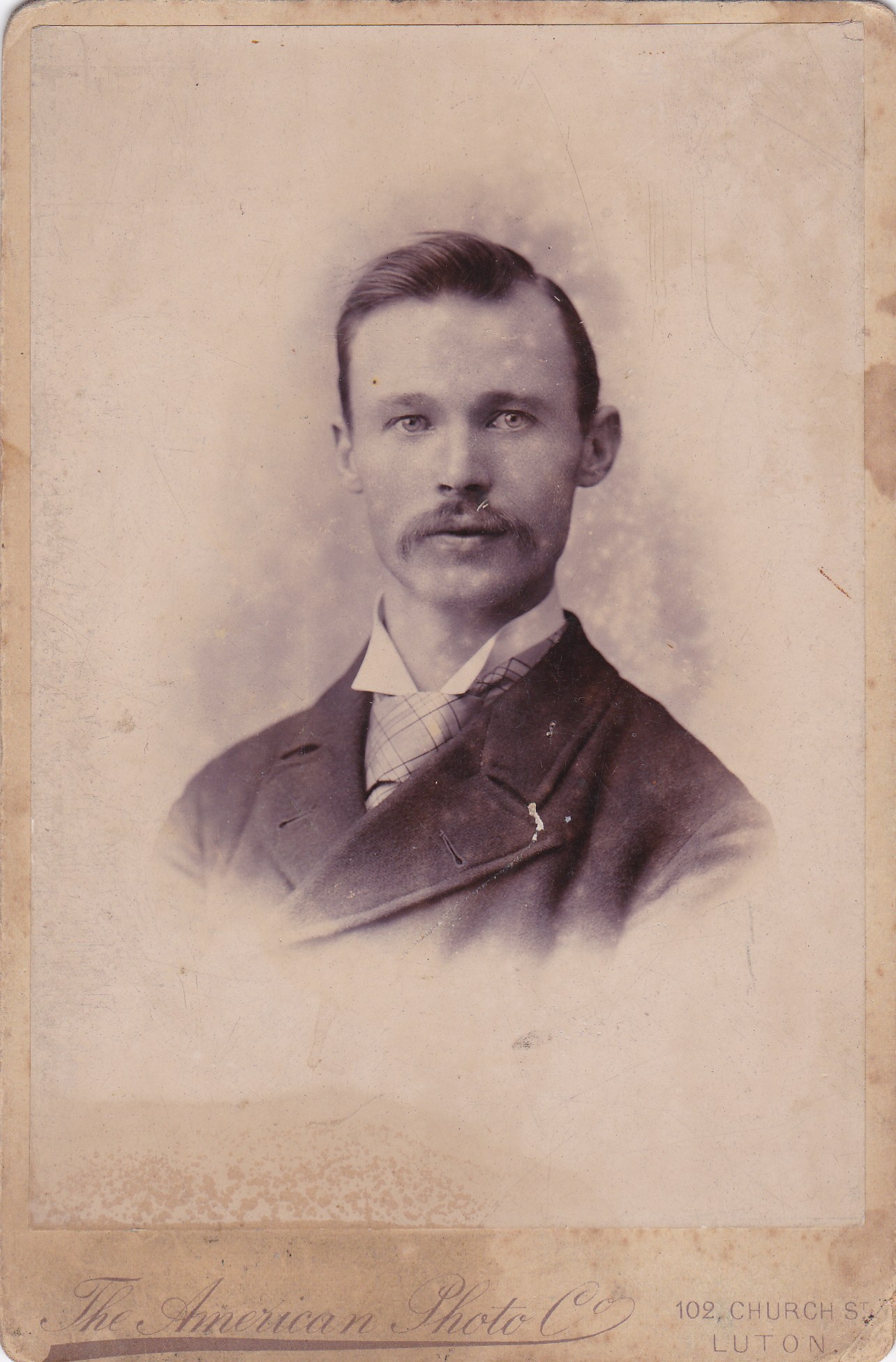 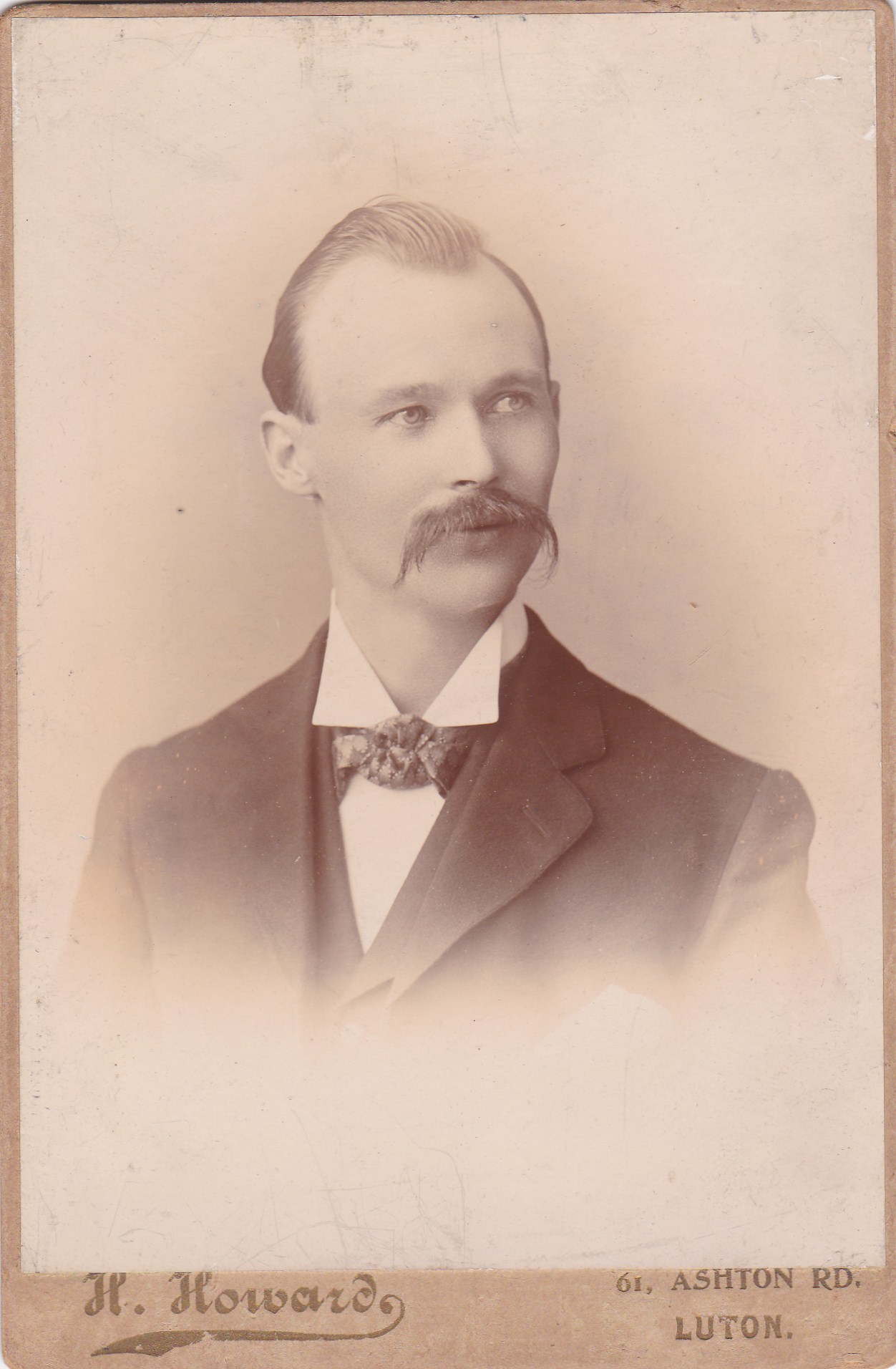 Born in 1868 in Slip End, Israel was known as William for most of his life.  His father, Richard was a shoe maker and they remained in Slip End at the time of the 1881 census.  William was caught scrumping in 1880 and brought before the beak.  As the clip below from the Luton Times of the 12th November 1880 shows, scrumping acorns was a popular hobby. 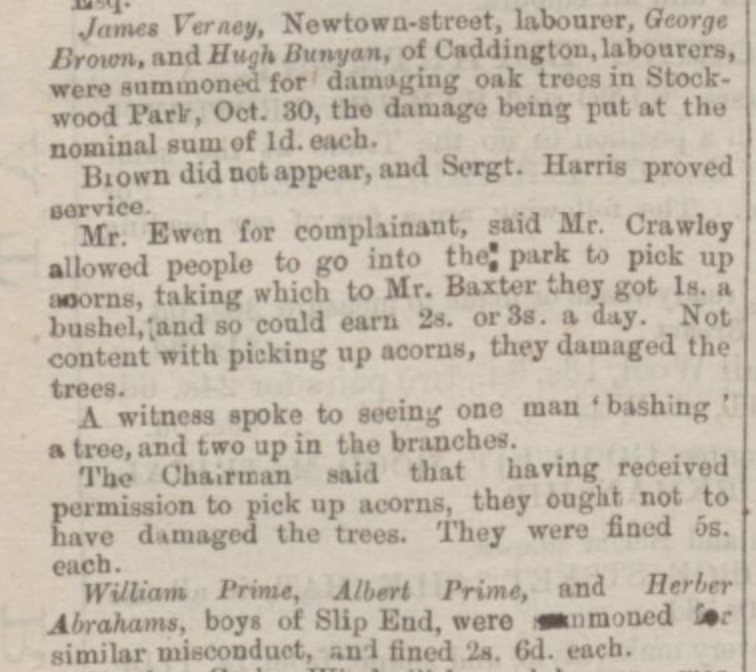 By 1891 the family were living at 4 Milton Road, Luton.  William was an assistant Insurance agent. He married Lydia Webb in the spring of 1895.

Perhaps running away from scrumping trips trained him for later life as William became a superb athlete.  The first mention of his exploits were reported, left, in the Athletic News of 13th December 1887.  The next major achievement I have found is William winning the Bedfordshire Championship half mile race in 1893.  The following Summer he established himself as one of the Premier athletes in Bedfordshire winning both the mile and half mile race.  He also won many other events.

The clip left is from the Leighton Buzzard Observer of the 24th July 1894 reporting on the athletics at the Liberal Party picnic.  We do not know if William took part in the comic race as well.  He also won the gold medal for the Mile race at the Athletic and Cycle Club meeting in August 1894 held at Dallow Lane

The two clips above are from the Bedfordshire Mercury of the 11th August 1894 reporting on the Bedfordshire Championships held at Bedford Grammar School.  The clip on the left shows that William retained his half mile Bedfordshire title.  He was very close to winning the Championship in the mile, right, but lost to his rival, Ward.  His prizes were medals shown below which were worn as watch fobs. 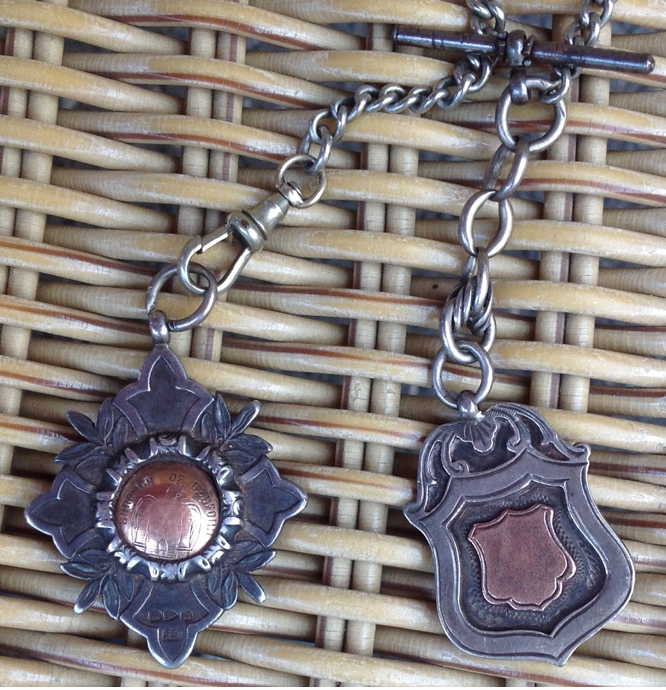 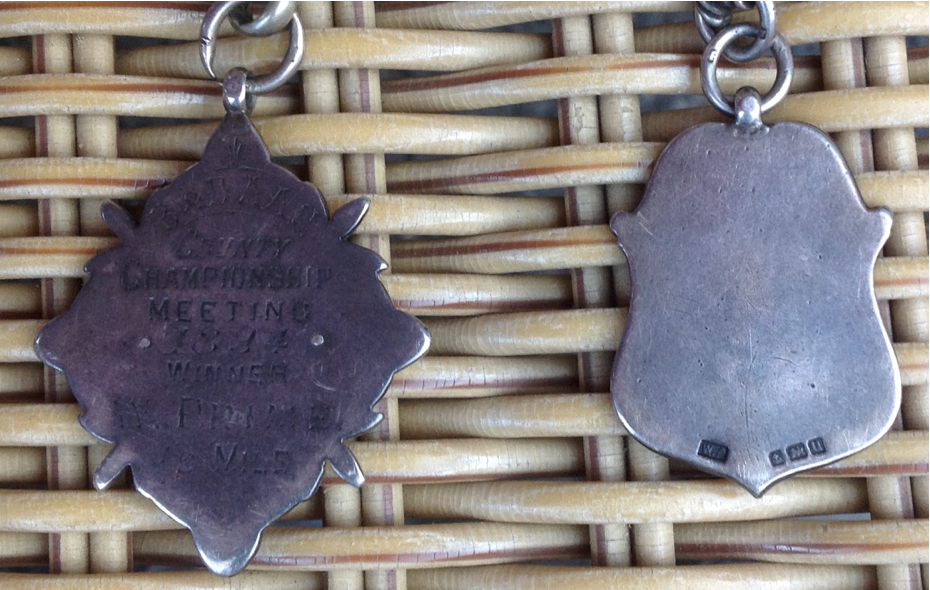 Some races had medals as prizes but many had household items instead such as the Musical box William won for winning the 880 yards at the Liberal Party Picnic event.  He also won a pair of vases shown below which are still in the family. 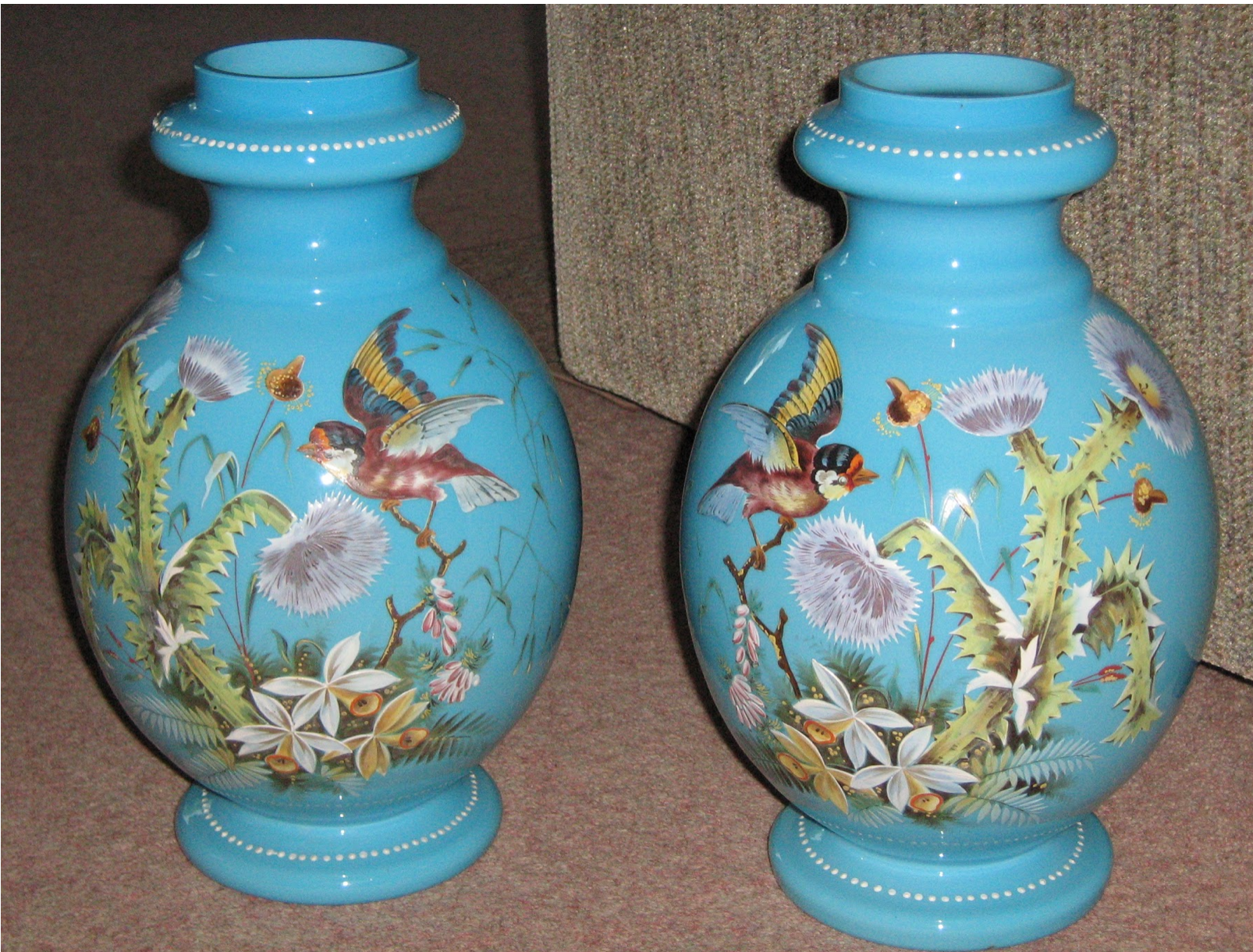 His success was noticed by the Straw Plaiters who were just about to play in the inaugural season of the Southern League.  He was taken on as “Trainer” and he is photographed with the 1894/95 team, below. 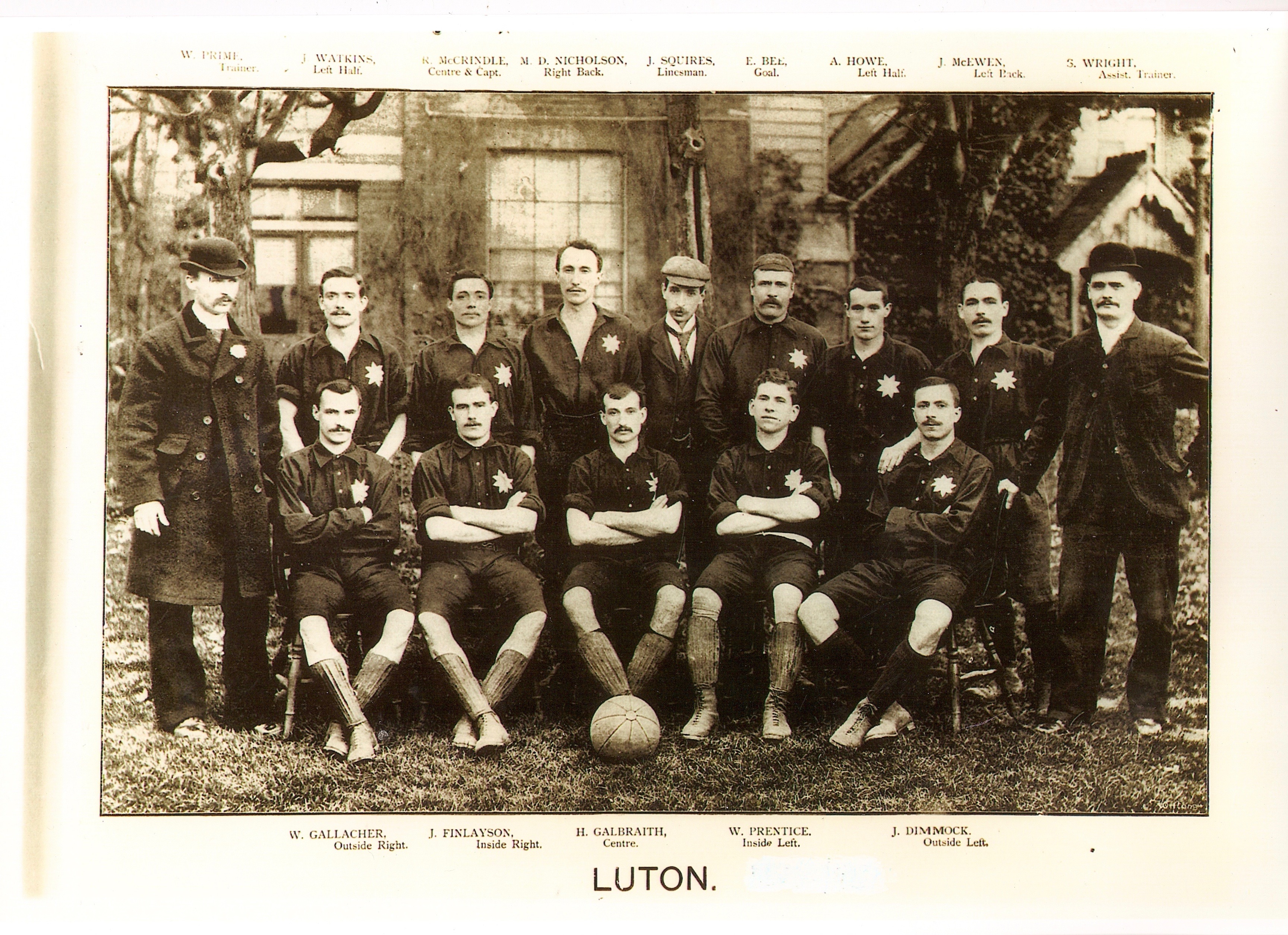 There is just one mention of William in the club minute book which is for the 17th September 1894 which says he should accompany the team to London.  The Luton News of 28th February 1933 also mentions that he accompanied the team to Swindon in 1895.  It seems clear that he played a big role in team affairs.  He was thanked for his services at the Luton Town Annual General meeting reported below in the Luton Times of the 31st May 1895.

William stayed with the Straw Plaiters for at least four seasons as he is in the 1898 team photo.  He had stopped racing and had become an official with the Athletics Club acting as judge and any other task that was required at meetings.

By 1899 William had become an Assistant Superintendent for the Prudential Assurance Company.  By this time, he and Lydia had three children, Winifred born in 1896, Grace Victoria born in 1897 and John in 1899.  The family moved to Fenny Stratford around 1902 where Clara and William were born.  William stayed in touch with Slip End and came back in 1903 for a Good Friday service at the Primitive Chapel who were raising funds for restoration.  The family returned to Luton to live at 32 Ash Road where their final child Edna was born in 1908.  The 1911 census shows the whole family at 32 Ash Road, in the shadow of the Ivy Road enclosure – the name of the Straw Plaiters ground as Kenilworth Road was incomplete at this time.

Jenny Carter and Christine Mackay supplied photos of the Vases and Medals.

Colin Gudgin, the custodian of the Prime Family Album, for the two photos of William and other information.