I enjoyed the TV series very much so I thought I would set out a few random thoughts.  There were inaccuracies but I was very pleased to see that it got a lot right and got people talking about the early years of football.

The series climax is the 1883 F.A. Cup Final won by Blackburn Olympic who defeated the Old Etonians 2 1 after extra time.  The game was much different to that of today – the 1882/83 season introduced the two handed throw in.  It was a time when goal keepers could handle the ball anywhere in their own half, players could barge any player at any time, there were no goal nets and no penalty kicks.

The portrayal of the Glossop working class lads seemed a bit off to me.  I’ve never seen so many caps in one place before and it seemed sterotypical especially when you add in the “trubble at t’mill” sub plot. The flat or baggy type cap appears to have become popular at the end of the century rather than the early 1880’s.  It was also a bit odd to see the footballers playing in braces.  I haven’t seen any period photos of players in braces – it is not a comfortable experience and strains the buttons.  Snake belts and stable belts (below is the Royal Anglian Regiment) were used a lot to hold up shorts. 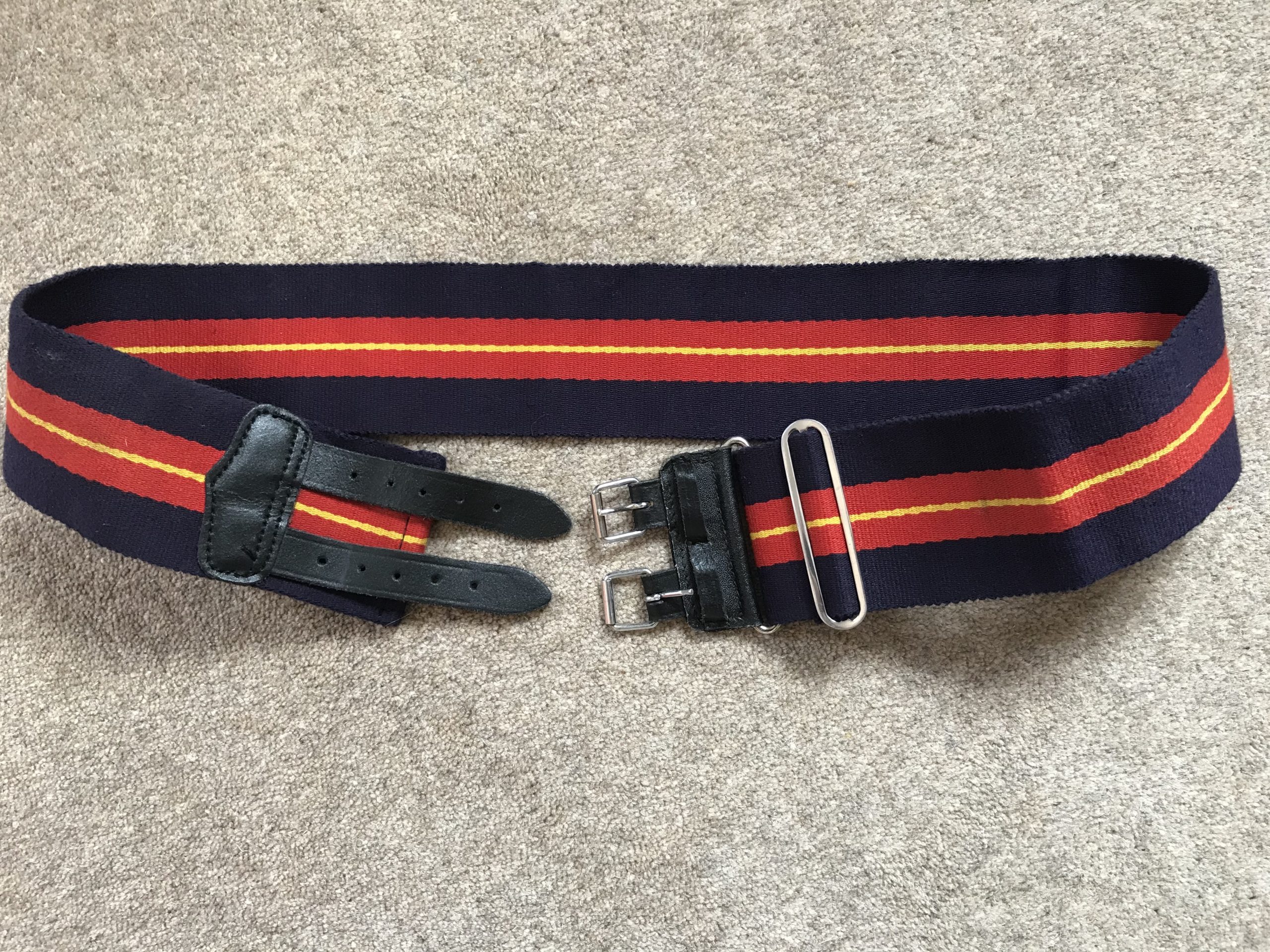 The series got me thinking about football boots for the working class.  Leather soles and wet grass do not agree with each other so studs or bars were needed on boots to keep ones footing. However, off the shelf boots were pricey especially for working class lads.  An obvious alternative would be for lads to get their local cobbler to attach studs or bars to an old pair of working boots.  However, I have no evidence that this was done.

Turning to the game that was the climax of the series, it was, of course, Blackburn Olympic that won the F.A. Cup in 1883 by beating the Old Etonians.  Fergus Suter, a (full) back, did not play for Olympic but for their rivals, Rovers (who would win the cup in 1884, 85 and 86.) 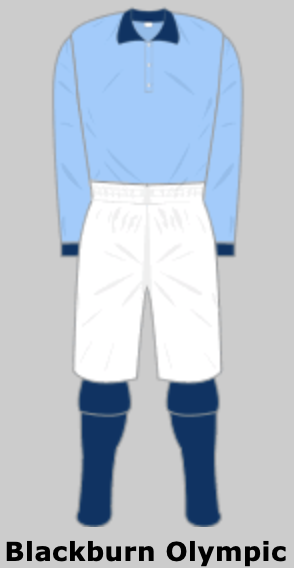 The “Blackburn” team in the series wore the red shirt on the left.  This had been the Olympic shirt but by 1883 they wore light blue (left).  The Old Etonians also wore light blue shirts so it had been assumed that Olympic changed shirts to dark blue for the 1883 final.

The newspaper sketch below shows Olympic in a darker shirt than their usual light blue. 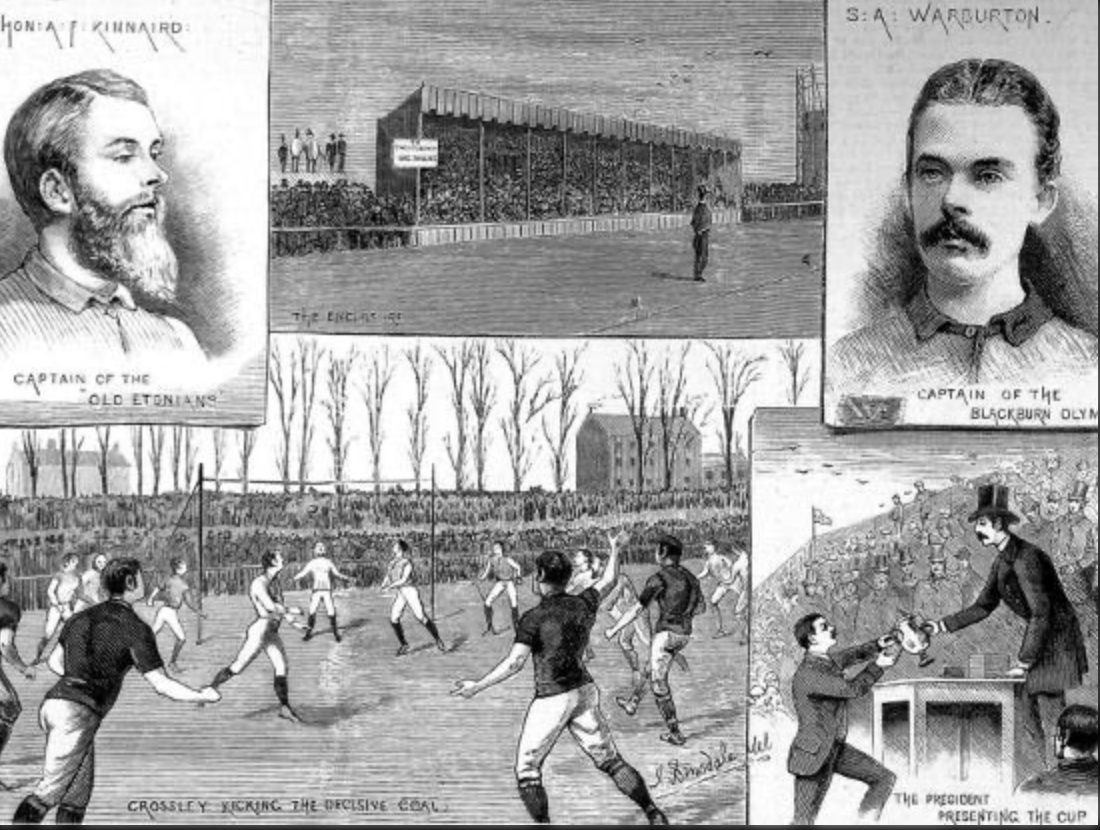 The rule about an alternative shirt in the case of a colour clash was still some years away.  This is where caps could come into play – teams could be distinguished by their different coloured caps (heading the ball was rare at this time).  The series showed a complete absence (I’m pretty sure) of a player in a cap in any of the games.  White was the most popular shirt colour so clashes were often settled by teams sometimes wearing (red) sashes.

Turning back to the above sketch – it caused some people to think that Olympic changed to dark blue in the final to avoid clashing with the Old Etonians.  However, if you look closely at the shirt collars in the sketch of the goal and the shirt of the Olympic captain in the top right, you will see it is portrayed differently.  I suspected that the artist simply showed Olympic in a darker shirt for the benefit of the reader of the newspaper.  I did some research and found that Olympic did indeed play in their usual light blue shirts.

Olympic did not return home the same evening as portrayed in the series.  They had an evening dinner with the Old Etonians after the final and spent the night in London before returning to their home town.

I did like the tactics shown in the series.  I have come across many mentions of the “heavier team” in my research.  The rush tactics used by the Old Etonians in the series looked right to me.  A pack of heavy men in a V formation bearing down on the opponents half backs and backs.  I have read of the forwards “breaking through” – a sign that the heavy men, dribbled through, round or over their opponents to bear down on the goalkeeper.  The amount of muscle, pushing and shoving involved in the breakthrough would depend on interpretation of the laws of the game by the referee.   Holding, hacking and tripping were considered infringements of the laws of the game but it was a rough sport.  In the series, the horrendous tackle on Jimmy Love highlighted what a savage game football was considered to be by many.   Ironically, the tough tackling Arthur Kinnaird, who became President of the F.A. in 1890 would make changes to the laws to make it less brutal.

If we look at the evolution of team formations below*, we see the number of forwards gradually reducing in numbers.  I feel fairly confident that the high numbers of forwards meant that a common sight on a pitch was a rolling melee – an association version of a rugby ruck…or is it a maul. 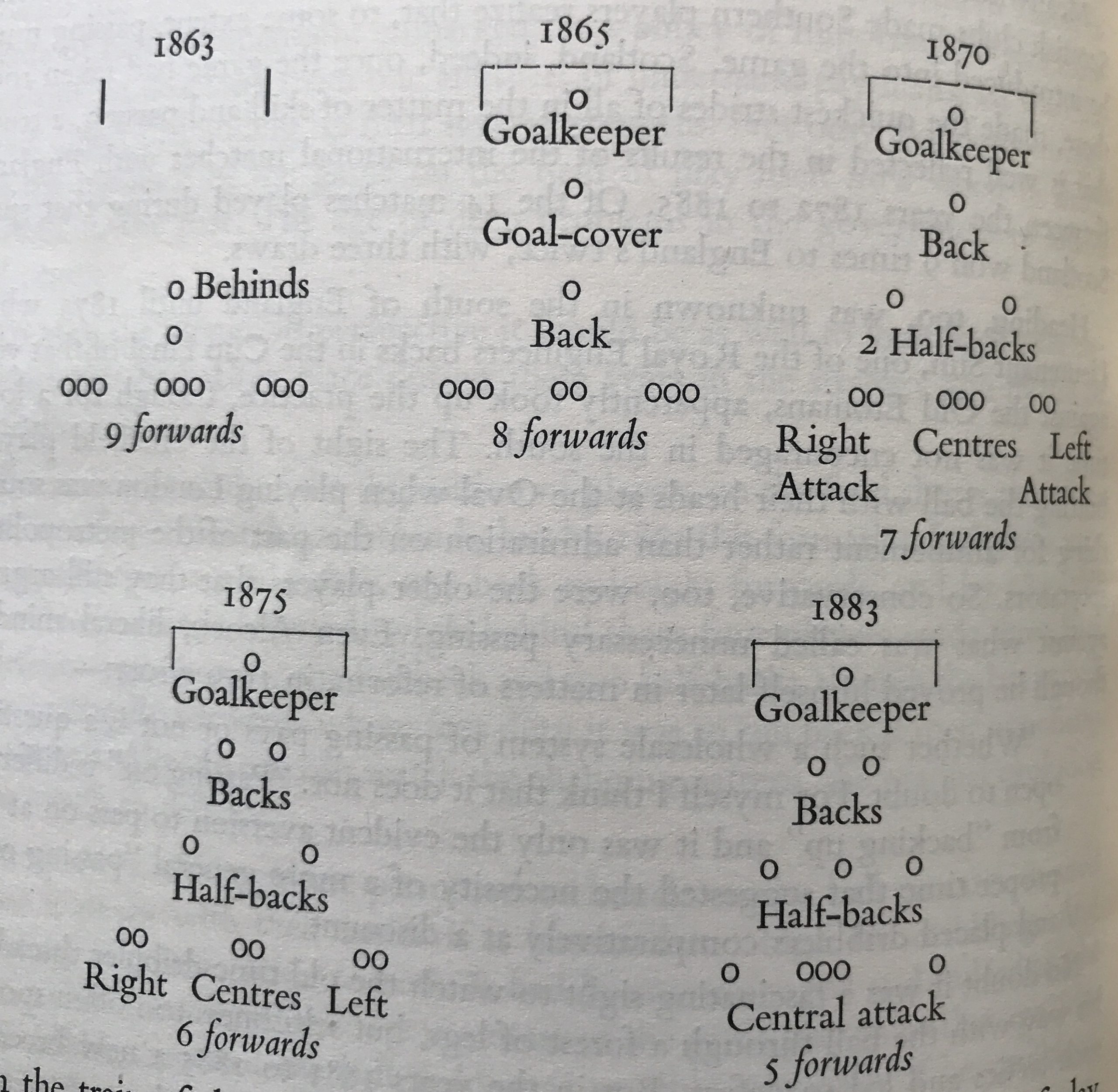 The series hints at Scottish players being light and wiry and therefore adopting different tactics – a generalisation which appears to hold some credence.  In the series, Fergus Suter encourages his players to get out wide and pass through the opposition.  The passing tactic was known as the combination game using the 2,3,5 formation – see the widely adopted formation below.  A key part of the combination game was the inside and outside wingers working in tandem by passing to each other down the grassy flanks and crossing.  But needs must, and long throws, corners and long kicks into the goal mouth were also a necessary part of the game. 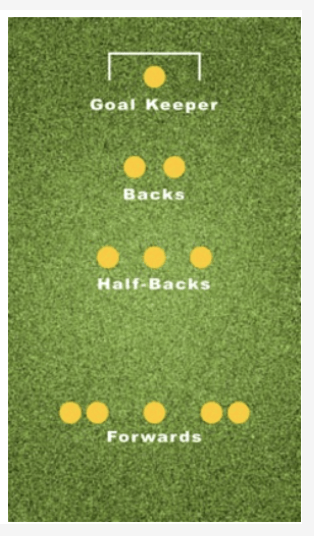 The Scotland national team appears to have adopted this revolutionary 2,3,5 formation as early as 1879.  It took some years for the innovation to creep down the country and embed into southern clubs.  Luton Town, formed in 1885, always played the 2,3,5 formation with mixed fortune. There are numerous newspaper mentions of the need for Luton players to improve their combination game, pass, keep their position and not to stray into other areas.

It was not until the arrival of J.W. Julian in 1892 that the combination game was consistently employed.  A tough tackling half back, Julian was player coach and led by example and got the best out of his players.  He helped launch the Straw Plaiters into the top three clubs in the south by April 1894.  In the Summer of 1894, the Luton club Secretary, Isaac Smith was asked by a newspaper who was the best team they had played.  “Ike”, who had been at the club since 1885, said Third Lanark who beat the Straw Plaiters 5 2 in April 1894.  Fergus Suter and his fellow countrymen deserve credit for the tremendous impact they had on the game of Association Football.

If you want to read more on football tactics then click here for another article on this site.

Thanks to Dave at Historical Football Kits website for the image of the kits.