Born in Govan, Lanarkshire on the 21st March1873 to Janet and Thomas Prentice.  Thomas was an Iron Ship Caulker. 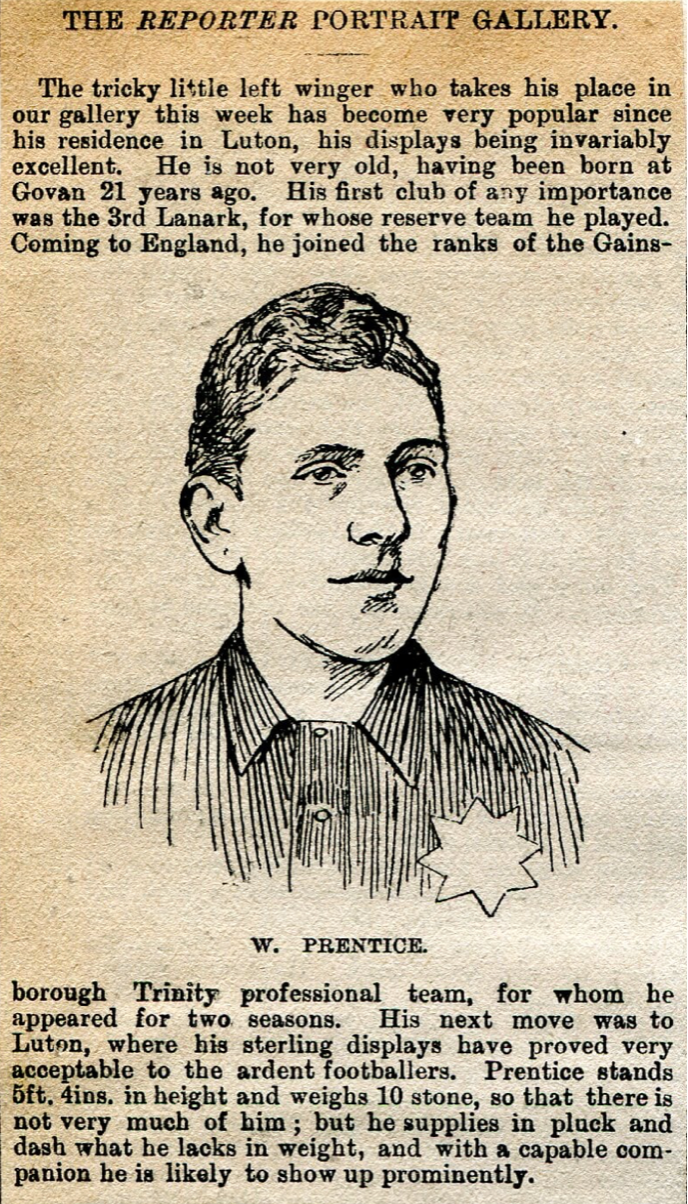 Billy wrote to the club in May 1894 offering his services.  He had just finished a second season with Gainsborough Trinity.  The committee recommended asking Galbraith about Billy and subject to all being well, offering him 25/- per week.

The minute book of 22nd October 1894 reveals that the committee noticed some friction between Fred and one of the newly arrived Scots, Billy Prentice.  The captain, McCrindle was asked to speak to Fred on the quiet.

Committee minutes of 26th November 1894 “that Prentice be asked to appear before the emergency committee some gentlemen on the committee thinking he was not taking sufficient care of himself.”

Emergency committee meeting of 29th November 1894 – “the Chairman spoke to Prentice with regard to taking care of himself also as to the advisability of not taking too much to drink.

To both these charges Prentice gave flat denial stating that during the whole fortnight he had been on the injured list he had not been out of doors 12 hours.  He further stated he was feeling far from far from well and asked to be allowed a weeks holiday for a change of air, at the same time bringing a letter from a doctor.  It was therefore resolved to let Prentice know final position in the morning as to his going away.  After Prentice had gone, secretary read a postscript at the foot of the letter from the Doctor stating he would like to see someone after the meeting.  It was then arranged that McShane and Secretary should wait upon Doctor McArthur.  After visiting the Doctor it was resolved that Prentice should be thoroughly examined by the doctor on Saturday morning the permission for the holiday to be given according to the doctors report. 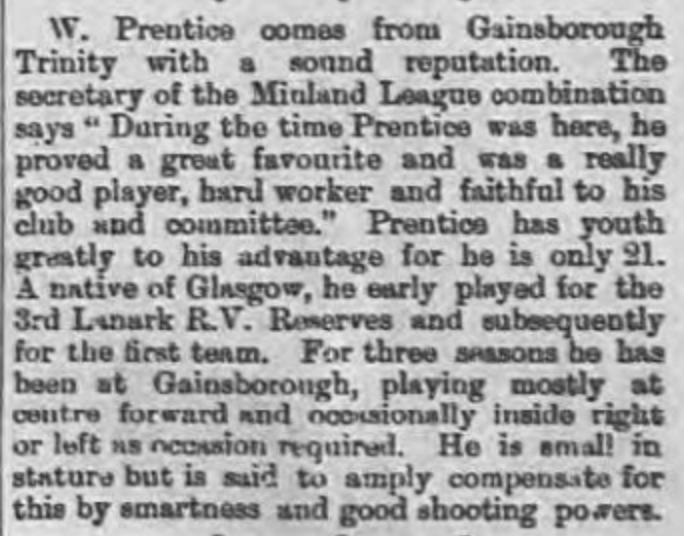 Emergency committee meeting of 29th January 1895 – “Mr Barford then stated it had been reported that there was a bad feeling existing in the team and if that was so the commitee had called them together to find out if possible what this bad feeling was about.  The purport of this was that Jack thought he did not get the ball when he might from Prentice, as to anything else existing no one knew of it.

Mr Squires replying said he was glad to hear it was so for no team would do any good with two factions in it.

Mr Barford then asked the players to do what it was possible to make a good game of it against Preston and promising them in the went of winning the match to ask the committee to make them a present of 10/- each.”

After the players had retired Prentice came before the committee, asked Mr Smith for a copy of his agreement at the same time questioning whether it was legal on our part to suspend him.  Mr Squires pointed out to prentice that he could easily settle that matter by writing to the Association but at the same time he must bear in mind that the Association reserved to themselves the power of prolonging the suspension.

In the end Prentice promised to write to Mr Bourke stating he did not intend the words used for him and providing Mr Bourke accepts the explanation then the matter can come before the general Committee again.”

The Luton News of the 3rd May 1895 described Billy – “For trickiness and smart head-work, Prentice would not find many equals, but he mars this by questionable behavious on the field.”  The newspaper did not know that the committee had already decided on 8th April 1895 that enough was enough and Billy would not be retained for the following season.

1901 he was married to Sarah and back in Govan and followed in his father’s footsteps working as an Iron Ship Caulker.  They had a son, Thomas who was six months old.