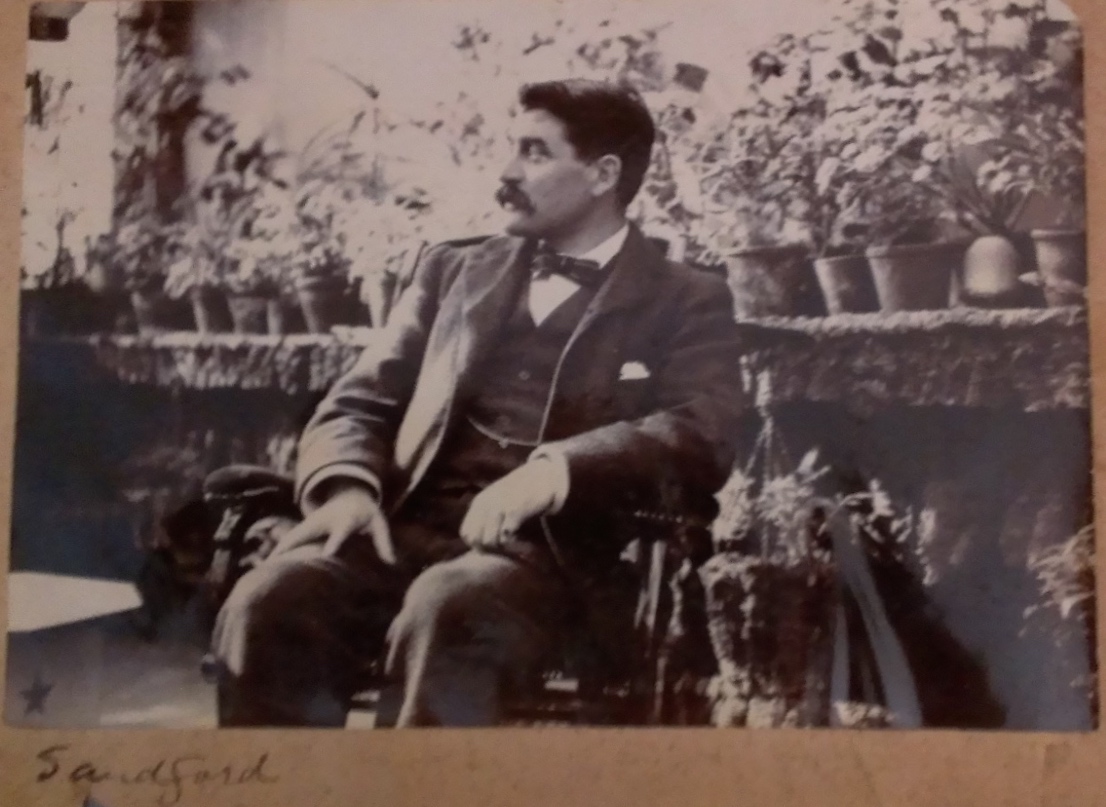 Sandford Ffolliott Pierpoint Moore was born in Lyme Regis, Dorset in 1860 to William Walling Moore and Emily Francis and he was baptised on 2 February 1860.  His father was an organist.

In 1881 the census finds him at St. Saviours Middle Class School, Ardingley, Sussex working as a school master.

Sandford became the Music Master at St. George’s School, Harpenden.  The first mention of him in the school magazine is on 14th December 1887 when it is recorded that he played football for Hertfordshire against Huntingdonshire at St. Albans.  In early 1888 he made a successful debut in the school theatricals.  He also played cricket for the school (football and cricket teams were made up of Masters and Pupils).  He took a First Class Certificate in Practical Anatomy at Edinburgh and was elected President of the St. George’s Swimming Club.  In the St. George’s School magazine there are profiles of all the footballers.  Sandford is described as;

“A first rate dribbler; always on the ball and using his weight well; should pass more to the wings.”

He continued in 1889 to be involved in school entertainment (conductor and performer), cricket and football.  His football profile for 1889 shows that he appears to have learnt to pass to the wings and reads;

The St. George’s kit at this time was;

Sandford also played football for St. Albans as well as the school and Hertfordshire.

In April 1890 Luton Town F.C. realised that there was a lot of talent on their doorstep in the form of the St. George’s School masters and ask him to play for them.  He made his debut in the replay of the Kettering Charity Cup Final against Grantham Rovers.  Unfortunately an injury to a key Luton player when the scores were level turned the tide and resulted in a victory for the men from Lincolnshire.  Sandford, an all round centre forward, impressed the committee of Luton Town and he played most of the games in the remainder of 1890.

He missed one game on 11th November 1890 when he turned out for his school in a team made up of masters and pupils.  The St George’s kit at this time was;

“S. George’s v Luton Town.  A great deal of interest seemed to be taken in this match to judge from the crowd of spectators who lined the ropes to witness the encounter.  Luton had a fairly representative team, and though defeated in the end by three goals to nil gave us a very good game, and proved the most stubborn opponents we had so far met this season, indeed at one part of the match it seemed quite probable that they would succeed in spoiling our hitherto unbeaten record.  On starting a rush was made into the visitors’ territory, and More made an unsuccessful attempt to shoot a goal.  Luton retaliated with some good combined play on the right wing between the two Whitbys, who both showed to great advantage.  All our efforts to score were frustrated by the safe play of the Luton backs and the persistency with which they packed their goal when pressed until after half-time, when Mr Moore backed up by Vaughan broke through their defence and scored.  Luton tried hard to equalise and missed a fine chance of scoring.  A hot attack was not made on the Luton goal, and at length a shot from More [not Sandford] took effect whilst our third goal was obtained from a scrimmage shortly afterwards, Mr Moore sending it through.

Sandford scored twice against a reasonably strong Luton Town team.   Only ten players are listed but there is no mention in the report that Luton played one man short so we must assume a name was missed off the team sheet.

On the 4th December 1890 Luton Town were due to travel to Wolverton in the first round of the Kettering Charity Cup.  The minute book records that the team was selected for Wolverton but none of the Harpenden men were available except Mr Moore who had to be home by 8 o’clock.  The committee therefore agreed that;

“Mr Long should hire Mr Cannon’s horse and trap, drive down gently early in the day and bring Mr Moore back at night”.

This is the only time such an arrangement was made by Luton Town so Sandford was a very important and well regarded footballer.  The effort was worth it as Sandford was man of the match and made the Luton goal with a magnificent run and pass for Frank Whitby to score.

Sandford played his last game for Luton in January 1891 as professionalism came to town.  (His photo left, is taken with the St. Albans team of 1891/92).  He would now concentrate his football abilities on the school and St. Albans.  He had scored the only goal in his first game for St. Albans in a win over Hemel Hempstead in October 1887.  He continued to play for them and won the Hertfordshire Senior Cup Final in 1892/93.  He scored twice in a 4 1 victory over the West Herts Association.

The club remain friends with him and he came regularly to Luton in 1892 and 1893 to referee games.  He continued to be involved in all the school activities already mentioned.  In 1894 he left the school and joined the “Old Georgian Club” as a “Past Master” in order to stay in touch.  The “Old Georgian” club ran a newsletter and met up regularly.

When Sandford left the area in 1894, a presentation was made to him at the St. Albans F.C. Annual General Meeting.  The following clips are the report in the local newspaper. 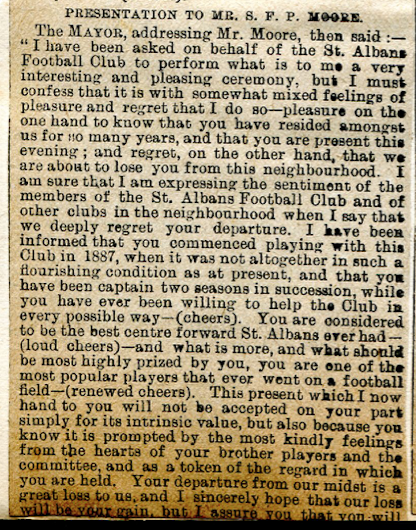 On the 24th January 1895 he married Angelina Mary Eveline Cornwall Brooks in St. James, Paddington, London.  Two children, Edmund Sandford and Joyce Mary Theodora follow.  The 1901 census finds him living back in the area living at the Gate House of St. George’s School and his occupation is described as “Professor of Music.”  The school shut in 1904 due to money worries.   The present school opened in 1907 and kept the name, St. George’s.

It is not clear if they continued the old boys newsletter after the school closed so we lose track of him apart from a few public records.  In 1911 Sandford was a teacher in Lambeth.  He died on the 27th February 1948 at 42 Disraeli Road, Ealing, Middlesex and left everything, £207 9s 2d, to his daughter.

David Tavener/St Albans City and St Albans Library for the photo of Sandford in his kit and the AGM clip.