He was a schoolmaster and lived in Bedford all his working life.

He played for Bedford against Luton in the quarter final of the Luton Charity Cup.  A wonderful Bedford side (photo below, Herbert with the ball) won 6 1 at Dallow Lane.  Herbert featured prominently and it was not long before he was approached by the Straw Plaiters. 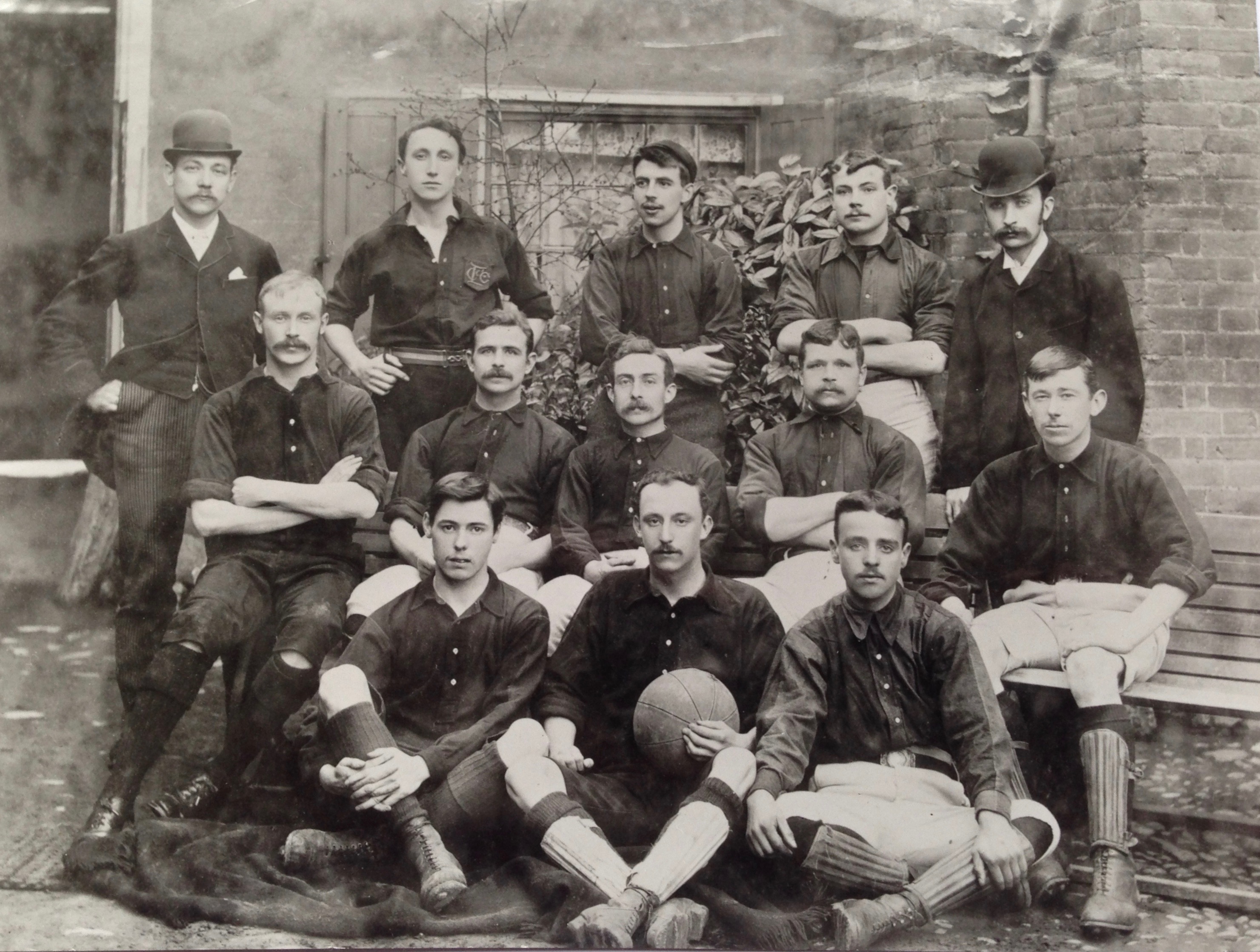 “The Luton centre forward is a good all round athlete, being known in football, rowing and cricket circles around Bedfordshire. In cricket he is especially famous having earned himself a name as a fast bowler and as a sure and confident bat.  Last season he played for Bedfordshire against Norfolk, Northamptonshire, Surrey second XI, Bucks and Oxfordshire.

His career as a footballer has been wholly with Beds sides, and commenced  in the winter of 1885-86 when he made his debut at inside right for Bedford, but being moved to centre forward after only a few games.  The Bedford eleven of that year was a good one, and reached the final of the Wellingborough and District Cup by means of Oclee’s considerable contribution.  They were beaten in the final by Rushden 1-0.  However, the Bedford team died a natural death and for five years football in Bedford could scarcely said to exist at all.  Last season Oclee was made captain of the Bedford team, which competed successfully as far as the semi finals of the Kettering and Luton Cups, being defeated by Kettering and Grantham Rovers respectively.  The Bedford team then suffered the fate of its predecessors and Oclee accepted the Luton committees offer to join Luton Town, as centre forward, during the 1891-92 season.  During the first three or four matches it was thought by a good many that the committee had made a mistake in their selection, and that the new centre man was not quite as good as he ought to be.  Subsequently, however, in the better class matches  and notably against Clifton, West Brom and Middlesbrough, he ingratiated character, and it is safe to say that he himself in popular favour by the excellence of his performances.  His play is of a remarkably unselfish character, and, it is safe to say that he never tries to score himself if he thinks he can place any of his fellow forwards in a position to shoot with more chance of success.  Mr Oclee has played for Bedfordshire on three occasions – against Huntingdonshire, Hertfordshire and Northamptonshire.”

In January 1892 he was described by the Luton Reporter –

“Another new man this season is the centre-forward, H.W. Oclee.  He is a very unselfish player, and keeps his wings well employed.  He possesses a fair amount of pace, shoots at goal well, and has a happy knack of being in the right place at the right time.”

Herbert did not score as many goals as he should as he often played at centre forward.  He was really a wing man which is where he played for Bedford.  As a wing man he was unselfish, understood the value of combination play and was use to setting up goals not scoring them.

He played in the 1891/92 season regularly but at the start of the following season his brother became ill and Herbert decided he could not play.  Herbert then became ill but came back to play on the wing in a number of games.  The great forward, Hugh Galbraith was signed in the Autumn of 1892 and Herbert’s service were dispensed with in early December 1892.  The club paid Herbert’s wages up to Christmas.

He married Emily Sarah Carr on the 2nd November 1893 in Kentish Town.  They had a son, Harold Vernon Oclee born in 1894 and who died on the Somme in July 1916.  The clip below is from the Bedfordshire Times of the 4th November 1916.

Herbert’s retirement from teaching in 1923 was covered by the Bedfordshire Times of 28th September 1923, below.

Herbert and Emily’s Golden Wedding anniversary was covered in the 5th November 1943 edition of the Bedfordshire times, below.

Herbert passed away in Bromham, Bedford on the 18th July 1946 and the Bedfordshire times covered it the following day. 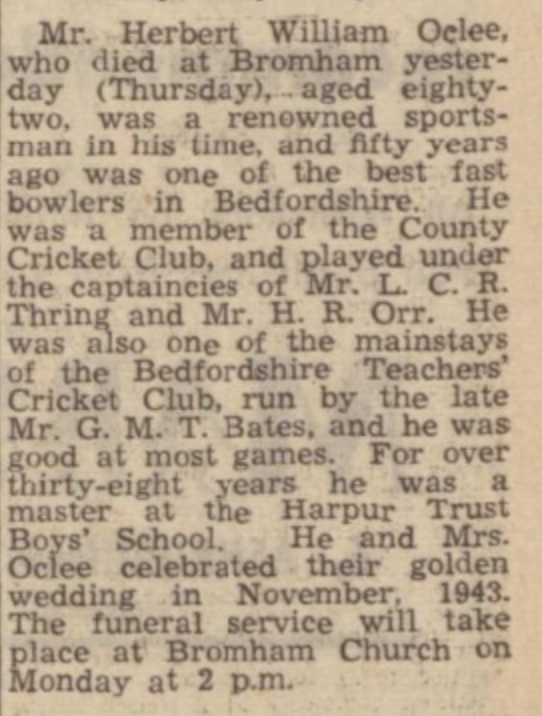