Known as John, he was born on the 23rd February 1864 in Mauchline, Ayrshire. 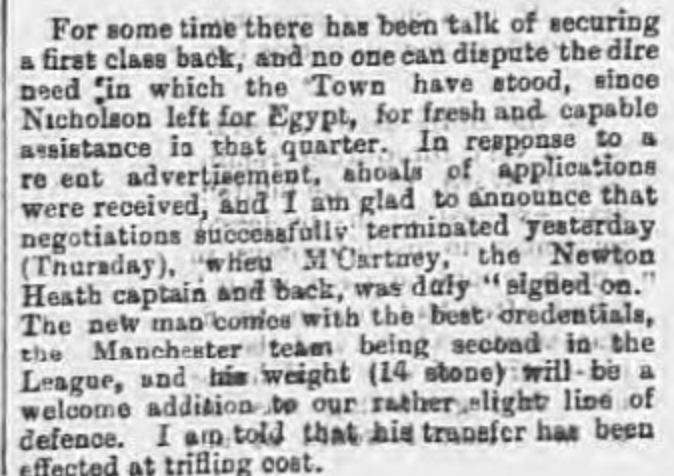 John was signed in March 1895 without fanfare (clip left from the Luton Times of 15th March 1895), he was selected to play back against Sheffield United at home on Easter Monday.  He did well enough to offered a contract for the forthcoming season – in April he was offered £1 close season and £2 per week.

There was, however, unfinished business with John’s former club, Newton Heath who wrote to Luton Town F.C. in May 1895.  The committee resolved “a grant of 20/- be allowed to McCartney as part share for his services to Newton Heath.”  This sounds like compensation to Newton Heath because McCartney left them before his contract was up. 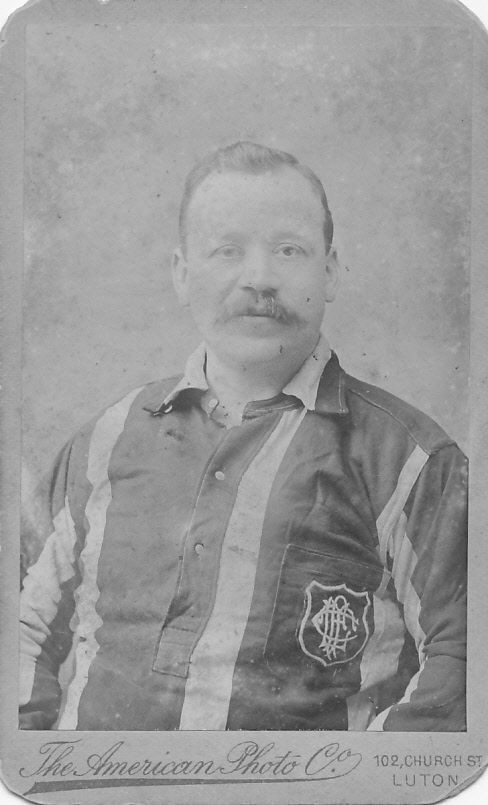 There is a glazed look to John’s photo in the striped jersey, left.  It appears he was a heavy drinker.  The Luton Town Committee met on the 2nd September 1895 and the minute book reveals –

“The conduct of McCartney then came before the meeting rumours abounding that he was the worse for drink on Saturday night.  It was stated by Mr Barford that last year we resolved to take no notice whatsoever of rumour or anything that came second handed and he thought this season we ought to act the same and bring nothing before the committee unless actually seen officially.  Mr Squires mentioned that he had seen it himself.  It was therefore resolved that Messrs McCartney and Finlayson should attend before the Emergency committee on Tuesday September 8th.”

“McCartney came before the committee when the Secretary addressed a few words to him with regard to his conduct and condition on Saturday night August 31st.  In answer to the charge he acknowledged that he was in fault and guaranteed to keep from the drink and that the club should suffer in no way on his account.  He further suggested that a notice should be posted in the dressing room that the trainer would be expected to report to the committee any player found the worse for drink.” 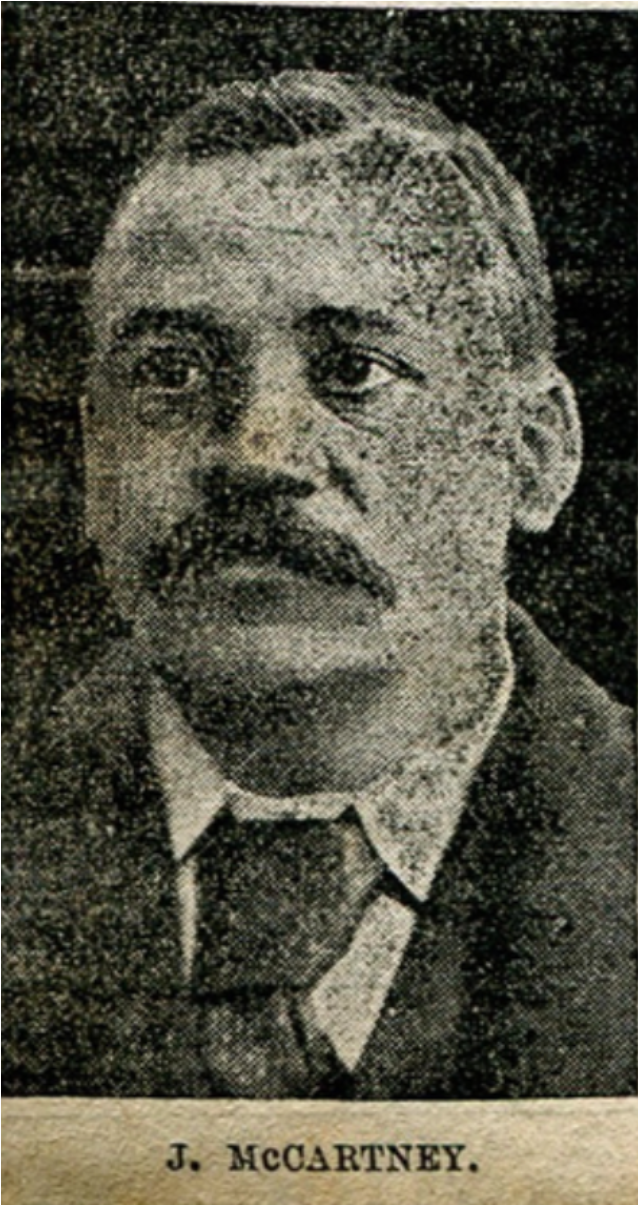 “McCartney then came before the committee.  The Chairman severely reprimanding him for his conduct in the past few weeks.

There were three things he wanted from him to give special attention to viz. 1st, to be sure and not get too much drink.  2nd, to guard his tongue and refrain from talking about the players more especially in public places.  3rd, to put a cheque upon using bad language.

McCartney promised to attend to these things and would abstain from drinking entirely.”

“Mr Bennett proposed and Mr Arnold seconded that McCartney be suspended a week (dating from Wed 11th) for general misconduct.  The matter was fully discussed and at length was carried unanimously.” 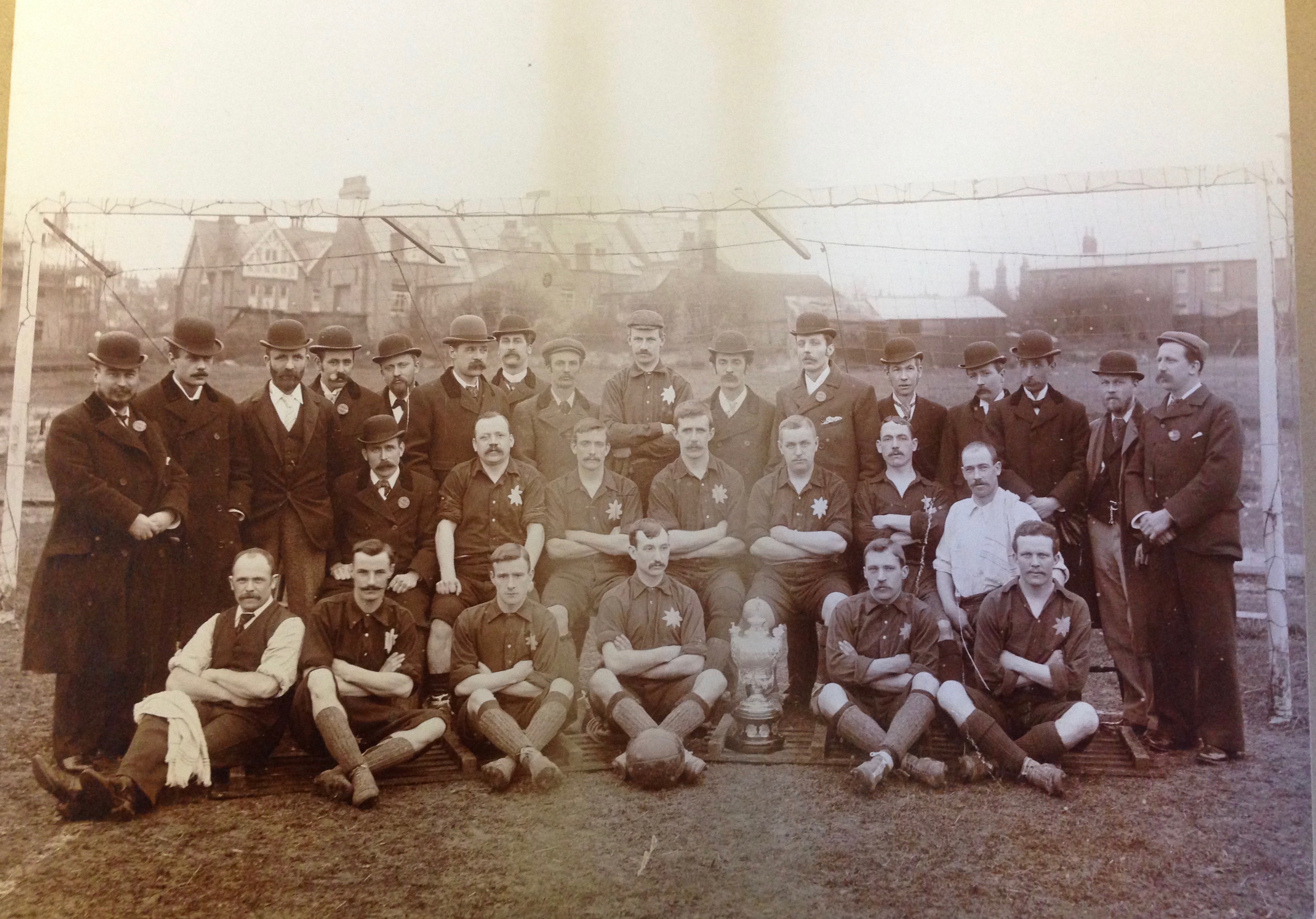 A back and uncompromising enforcer on the pitch, John made 73 appearances for the Straw Plaiters scoring 4 goals.  He helped the club win the Luton Charity Cup in 1896 – above is the team and committee with the cup on the Dallow Lane ground.

John went on to manage Portsmough and Hearts.  He had built an excellent Hearts side that was seriously challenging Celtic’s dominance when war came in 1914.

In 1927 the prestigeous Athletic News gave John the front page. 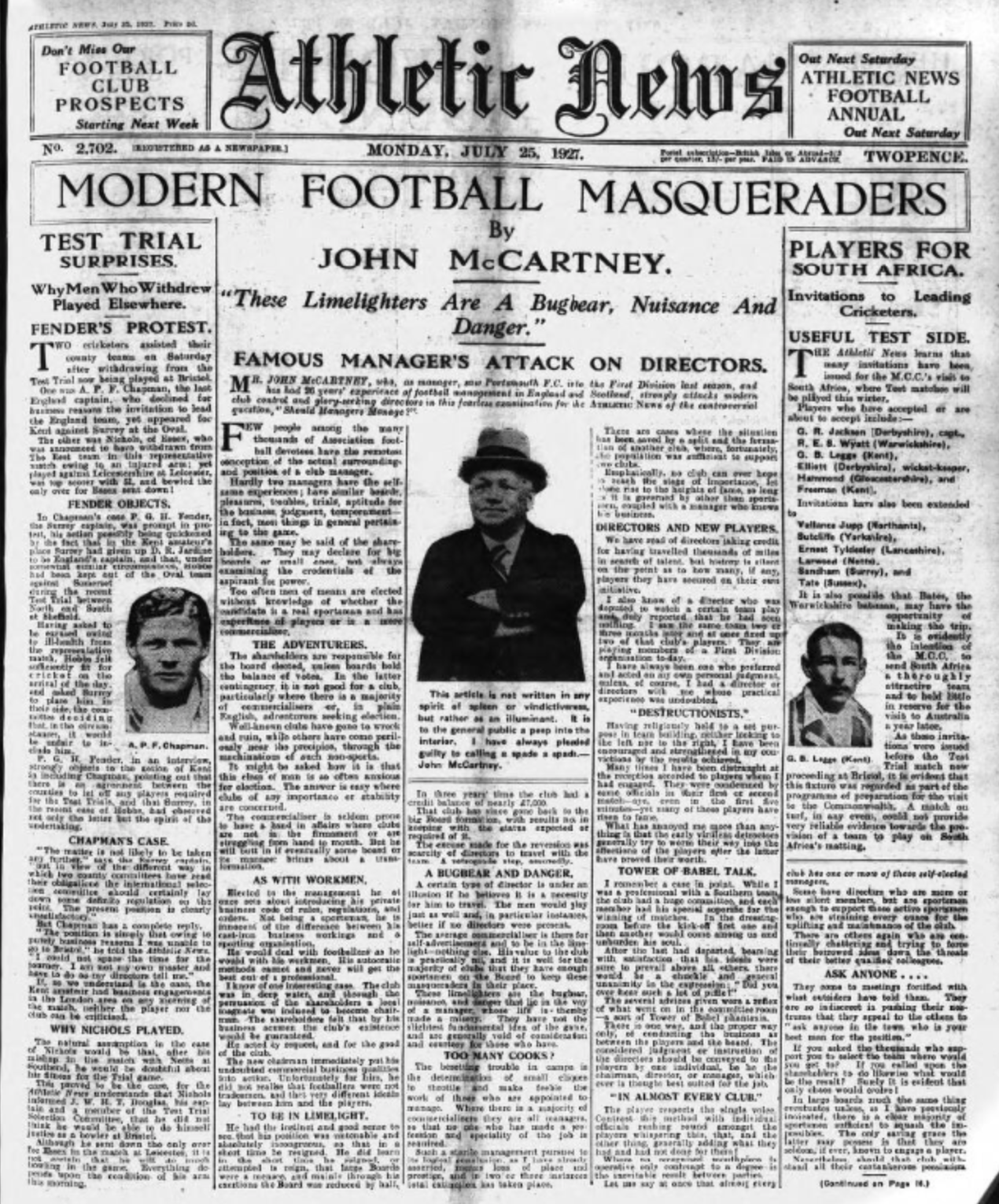 John became Luton town manager on the 14th September 1927 and stayed until December 1929.  The club won 57 of 151 matches played with 38 draws and 56 losses.  In April 1928 John had a leg amputated as reported by the Hampshire telegraph of the 13th April. 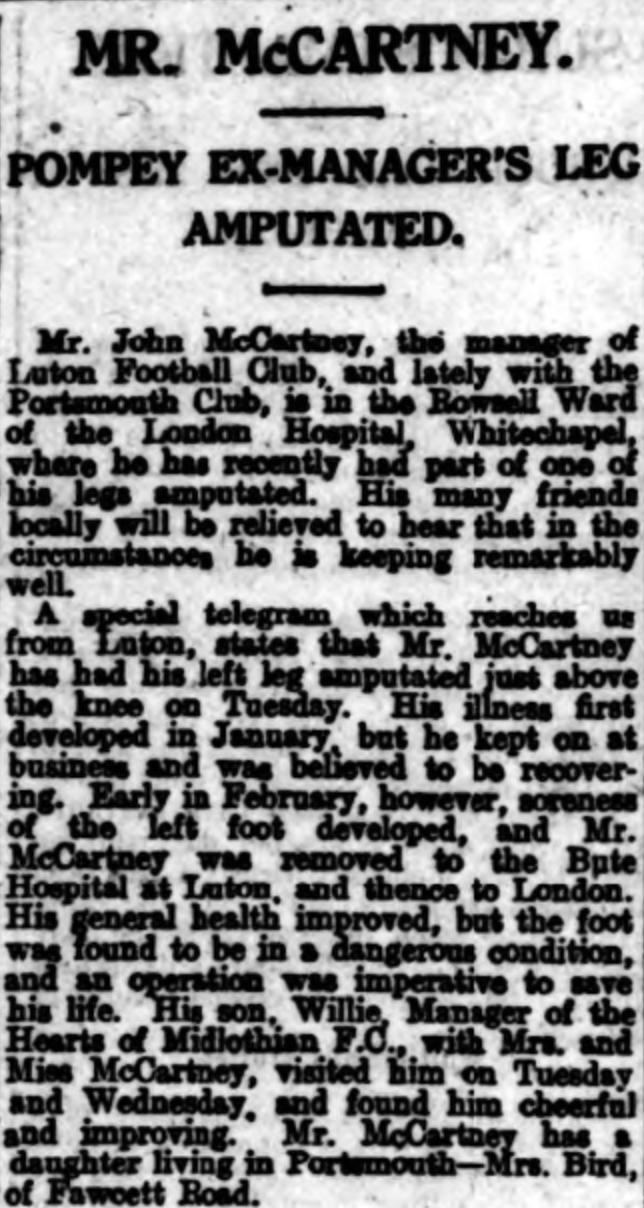 John passed away in January 1933 as reported by the Luton news below. 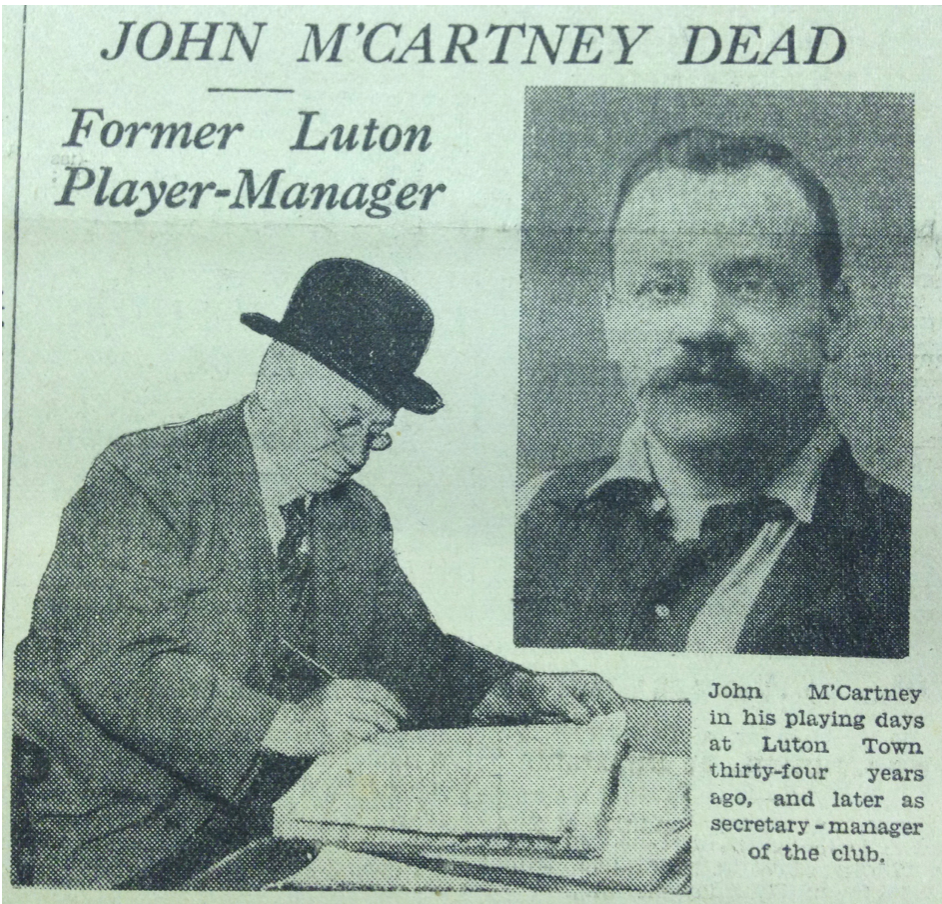 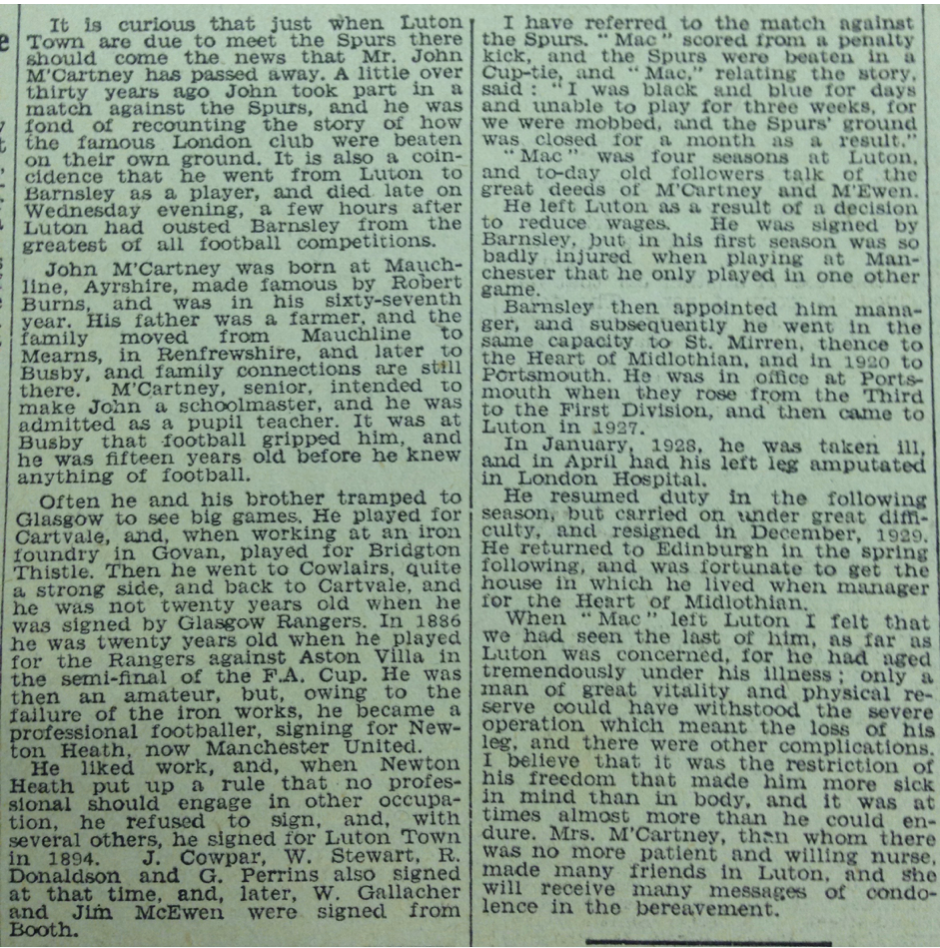 His death made the sports section of just about every newspaper in the country such as the one below from the Nottingham Evening Post of 20th January. 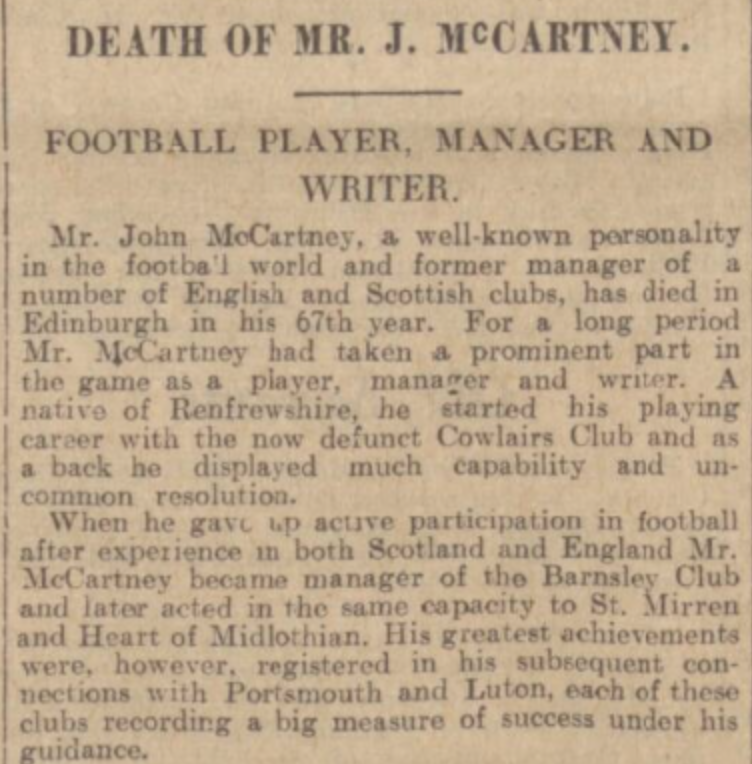 John was certainly a character and two years later the Luton News reported some anecdotes, below. 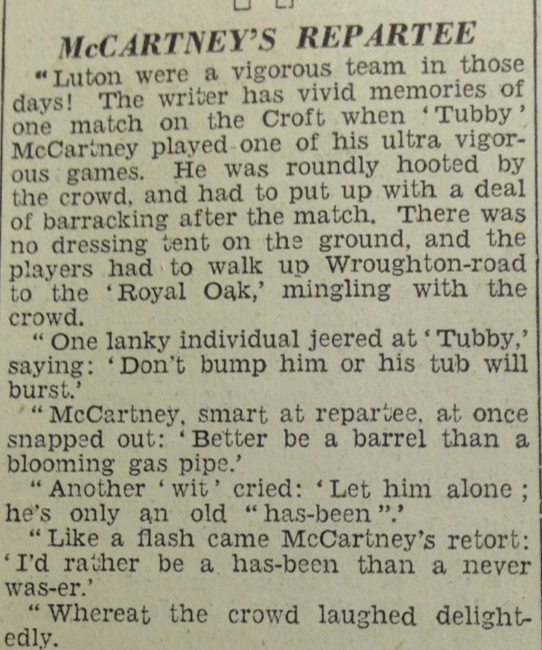 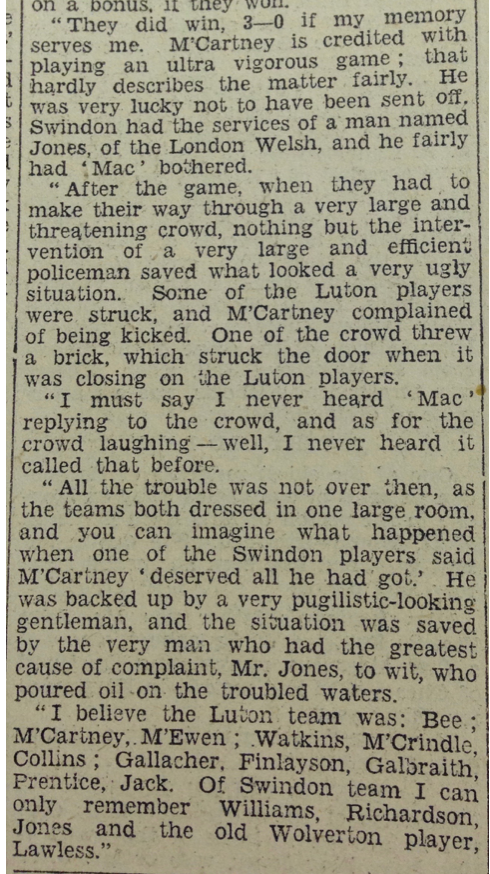