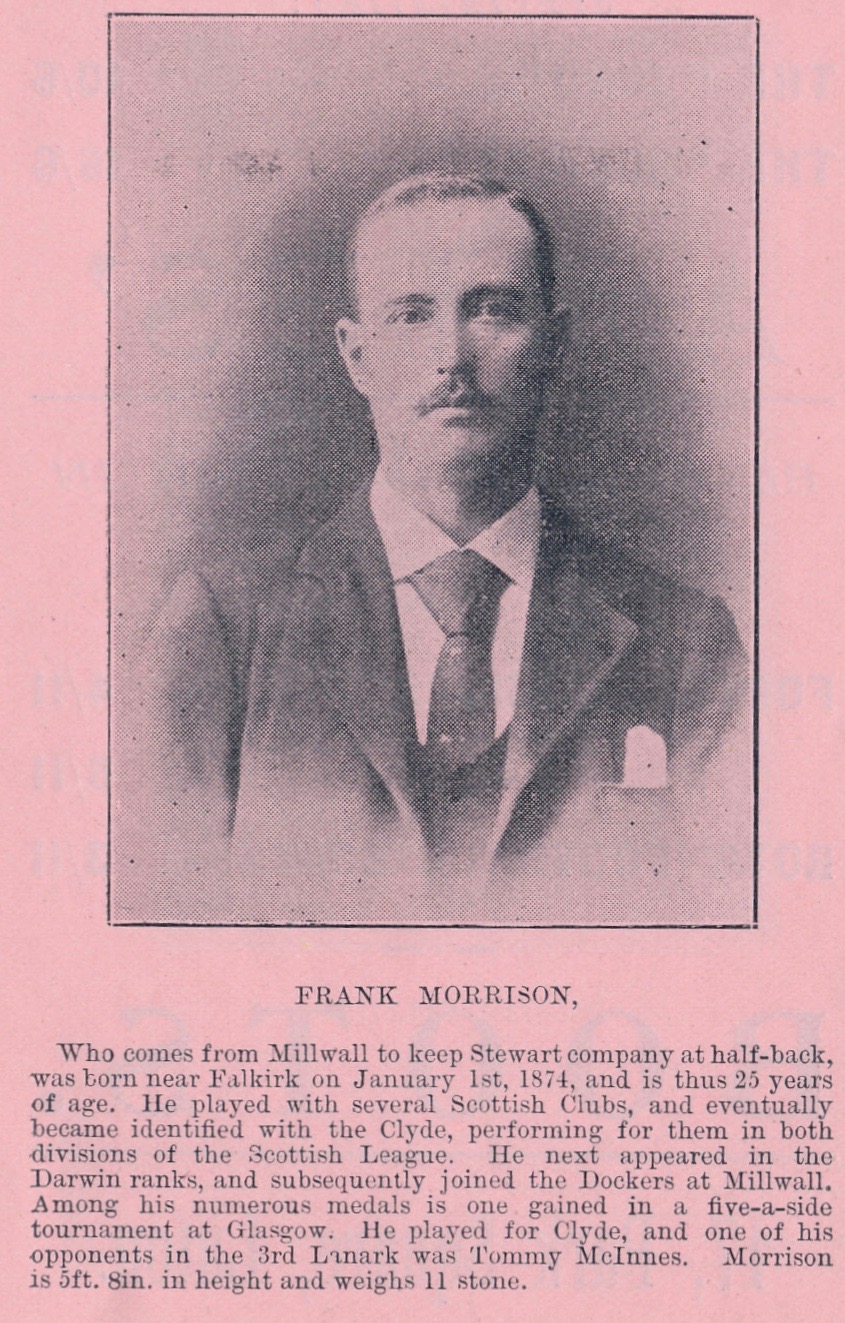 Thanks to Dougal Cross for the following information on Frank.

“Francis is described as being born in Falkirk, but I have not yet discovered exactly where. In the 1871 Census Francis is shown as living near Loch 16 on the Forth and Clyde Canal. Other records describe the birthplace as Greenbank. I found records to show he was born on 1 January 1870 so when he played for Luton he may have adjusted his age by four years to appear younger.

His parents were James Morrison and Susan Fotheringham. He had three brothers and a sister. When his father died his mother remarried and Francis was living with them in Main Street, Bonnybridge. He seemed to have followed his father into heavy work at an iron foundry.

He was living in Clydebank in 1891 and met his wife Agnes Drummond who was a general worker at lodgings in Stanley Terrace. Francis was 20 and an iron dresser. He probably started his football career in this area.

Agnes was working in Thorndale, Skelmorlie when she and Francis were married two years later in Renton, Dumbarton. They had four sons and two daughters, but none of them followed a football career.

Francis seemed to have started his professional football career at Clyde, but I have no records of this. In 1896 he played for Darwen in Lancashire. During the 1896-1897 he made 27 appearances and scored three goals.

Francis then moved to Millwall for the 1898-99 season. In 1899 he moved to Luton Town and made 13 appearances,.  The Luton records show 17 appearance so four may have been in friendlies or FA Cup ties. He then he moved on to Barnsley. In the 1899-1900 season he made 15 League appearances. Includes home to Woolwich Arsenal. Div Two.

His description from Barnsley says .- A native of Falkirk in Scotland, his first club was Clyde, but his first taste of league action was for Darwen in Division Two in the 1896/97 season when he made 27 appearances scoring 3 goals. He had a brief spell with Millwall Athletic in the Southern League, before joining Luton Town, where after only 13 games he joined the Reds (Barnsley) in January 1900. The small but stocky wing-half was a regular in the first eighteen months of his stay at Oakwell, either at left-half or left-back, but lost his place in the 1901/02 season (aged 30) to new signing Christopher Welch from Hebburn Argyle and was released at the end of the campaign.

When he retired in 1902 he was 32 years old. The 1911 Census shows that he and the family had moved from Barnsley to nearby Hemsworth and he was working in the coal mines as a hewer, a hard physical job. He died in Hemsworth in 1940, aged 70

Funny footnote. When his daughter Annie was born in 1902 the family’s Scots accent must have got the better of the Registrar and Francis, as Father, is described as a professional fruit boiler!”

I investigated why Frank only played 17 times for the Straw Plaiters.  Frank was asked to leave the club in January 1900 as reported by the Luton Times.  The club revealed a huge loss after a game when the gate money was £24 and the wages £40.  The total expenses for the week was £70.  So Frank and 5 other players were asked to terminate their contracts and move on, which they kindly did.