The first song at a Luton match

When did singing at football matches begin?  That was the question posed recently on Radio Two.  I emailed the show with Luton Town’s entry “Up I came with my little lot” which was sung at Luton matches from 1894.  My email was ignored by the BBC – don’t they know I pay their wages!

The public came back with the usual suspects;

Norwich City’s “On the Ball City.”

Edward Elgar’s “He banged the leather for goal” written some time after his first Wolves game in 1898.

The radio presenter decided to move the goalposts by selecting the oldest song that is still sung today – “On the ball City.”  Norwich City were not formed until 1902.  It may have been sung earlier than 1902 but that claim does not appear to stand up to close scrutiny. 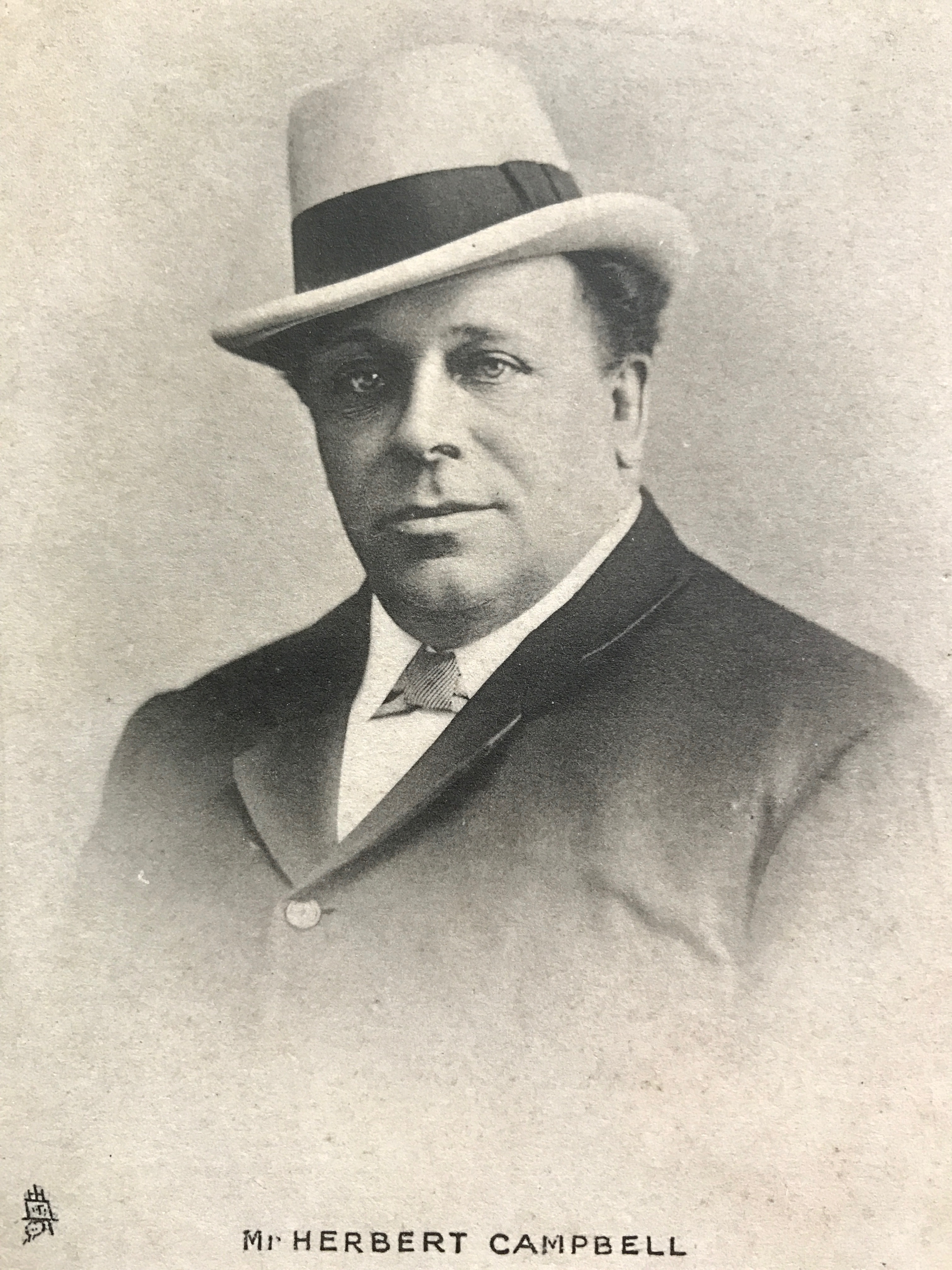 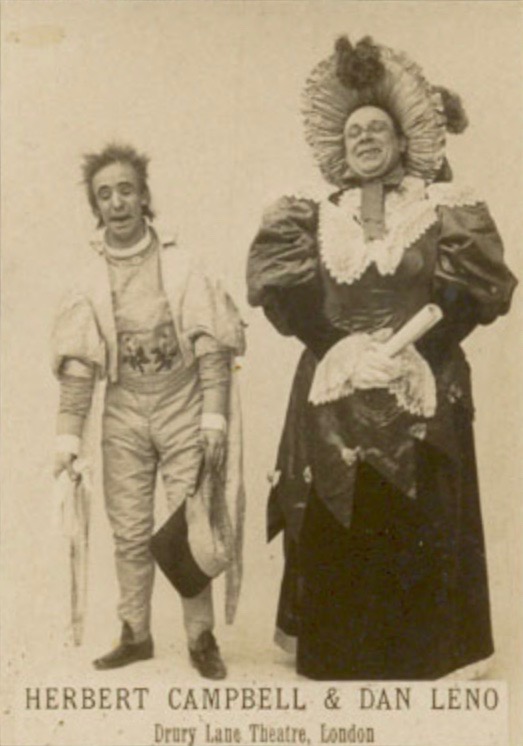 My entry “Up I came with my little lot” was written and performed by Herbert Campbell in Music Halls around the country from 1893 onwards.  Herbert Campbell had visited Luton as early as 1869 as the advert below left shows – From the Luton Times of the 21st August 1869.   Herbert Campbell was a cockney whose career really launched when he broke into pantomime in 1872, first in Liverpool then London.  He made it to Drury Lane and his humour and sense of character made him a leading figure in the Music Hall scene.  He often appeared with the great Dan Leno with Campbell often playing the lady or small boy.  At the top of his profession in the Summer of 1904 he slipped while getting into his carriage.  This brought on a stroke which ended his life.  He was considered the head of the Music Hall and his passing ended an era. 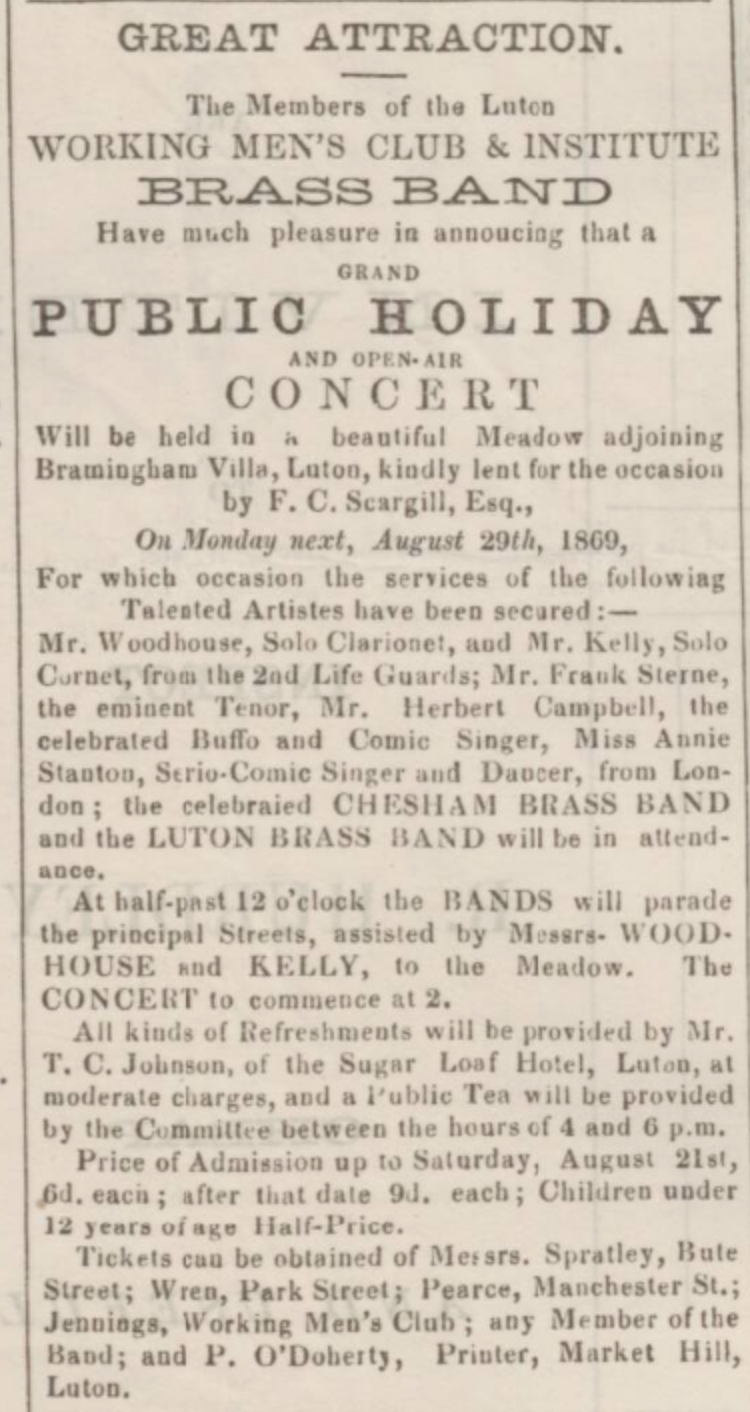 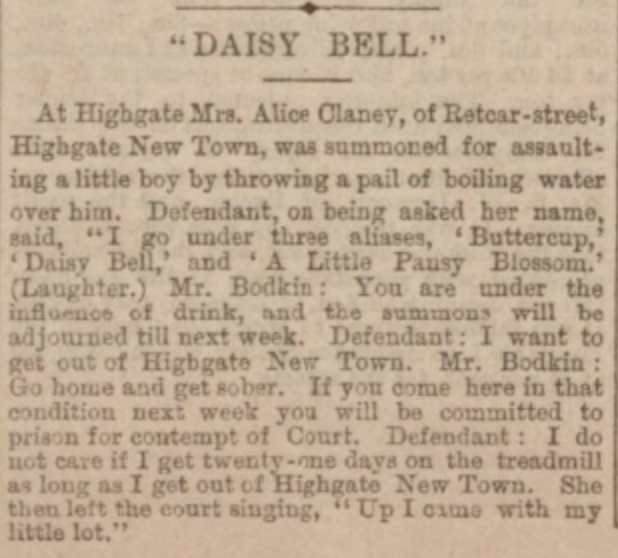 Campbell would have performed the song around the country, sheet music was sold and postmen would have whistled the tune.  The song became very popular across the country, even in court as Daisy Bell demonstrated in the clip above (from the Plymouth and Exeter Gazette 24th September 1894). 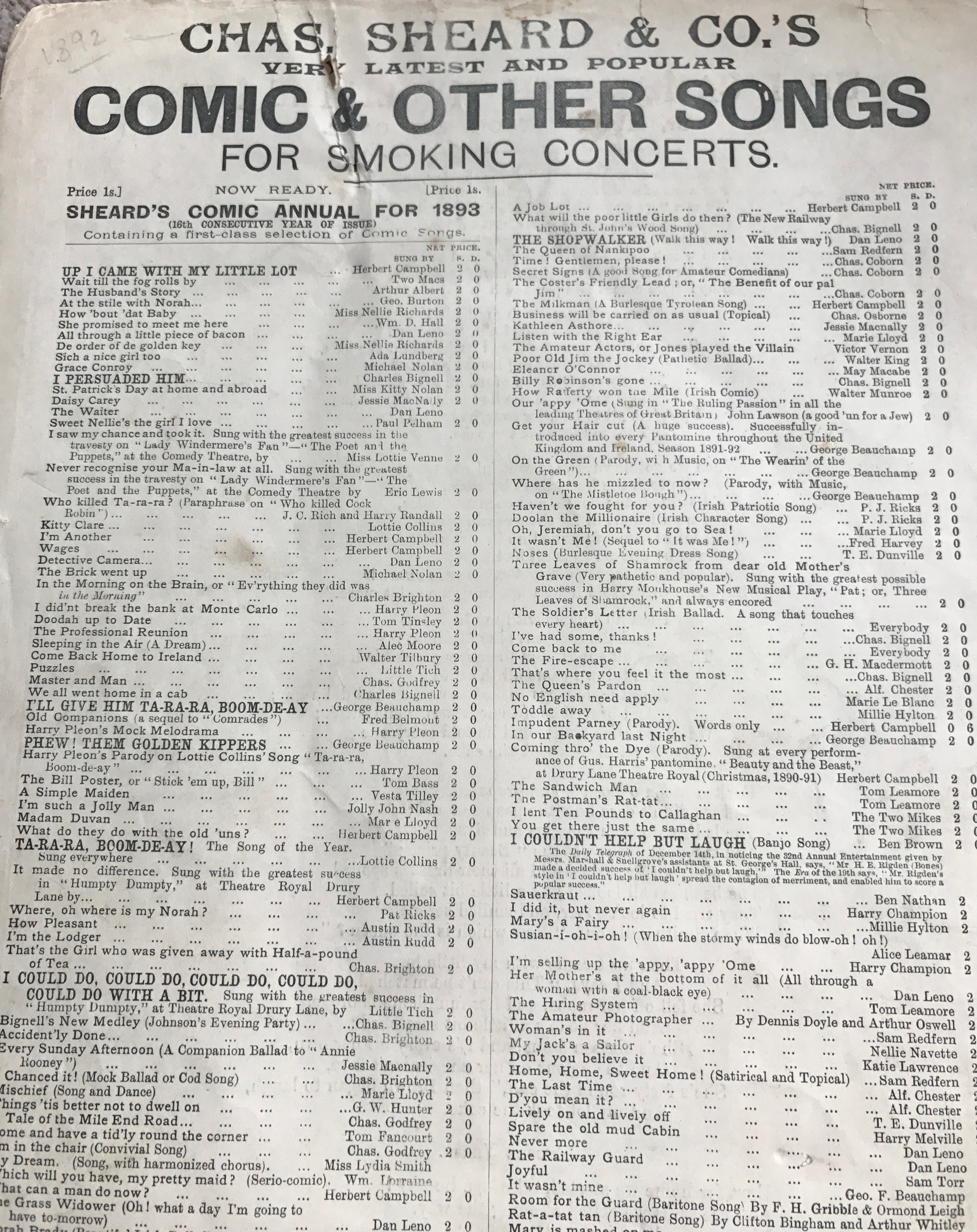 Families often had to entertain themselves so members would sing, play instruments, read poetry, tell jokes and stories.  This would stand them in good stead for later life when they attended other gatherings.  In adult life many men would have attended a Smoking Concert which was a fun gathering, with or without alcohol, where most performed their turn.  A list of comic songs for Smoking Concerts is shown above.   The Straw Plaiters held a Smoking Concert in April 1888 as described by the Luton Reporter;

The club built a pavilion on the Dallow Lane ground in 1890 – paid for by the brewer J.W. Green at a cost of £50.  Green did not miss the opportunity to install a bar in the pavilion selling his ale.  Not everyone needs a drink to sing but it certainly helps many.  The atmosphere at games appears to have gone up a few notches after 1890.  In January 1894 the following clip appeared in the Luton Reporter;

“Writing with regard to the match in the Morning Leader a correspondent, who signs himself “Ghost,” gives utterance to the following grotesquely inaccurate apology for Millwall :—I found myself at Luton on Saturday, a humble unit in a crowd of the noisiest spectators it has ever been my lot to mingle with.  The rain did its best to keep off, but the awful vibrations caused by the deafening shouts of the straw-plaiters left it no alternative, and it had to come down.  Their “little lot,” when trotted out, is a very blood-curdling affair.  Had the Luton players obeyed the injunctions of their supporters, the Millwall men could not have been brought home except in pieces.”

“Little lot” is a reference to Herbert Campbell’s “Up I came with my little lot.”  Not only was the song generally popular but it directly referred to the Luton team as many were small – J.C. Lomax, George Deacon and Walter Miller in particular were short men.  In the 1894/95 season, the informal nickname of the team was “the midgets.”  We do not know if the words were adapted to suit the Luton team.  The “blood curdling” description indicates some different words were inserted for the benefit of the occasion.  Certainly the “hooray” is perfect for a football crowd.

Press the play button below to hear the song sung by Campbell in 1903 – his cockney accent is wonderful.  Follow the words of the song below.  Note – Tile is slang for a hat (as in roof tiles). Moke means donkey.  Boko means nose.

Click on the link below to hear the song – there may be a short delay before it begins.

If the link does not work see Youtube https://www.youtube.com/watch?v=D-XESnzOSXI

Some pals of mine were going for the day,

For a bit of a blow out Chingford way,

Twas a “go as you please” along the route, 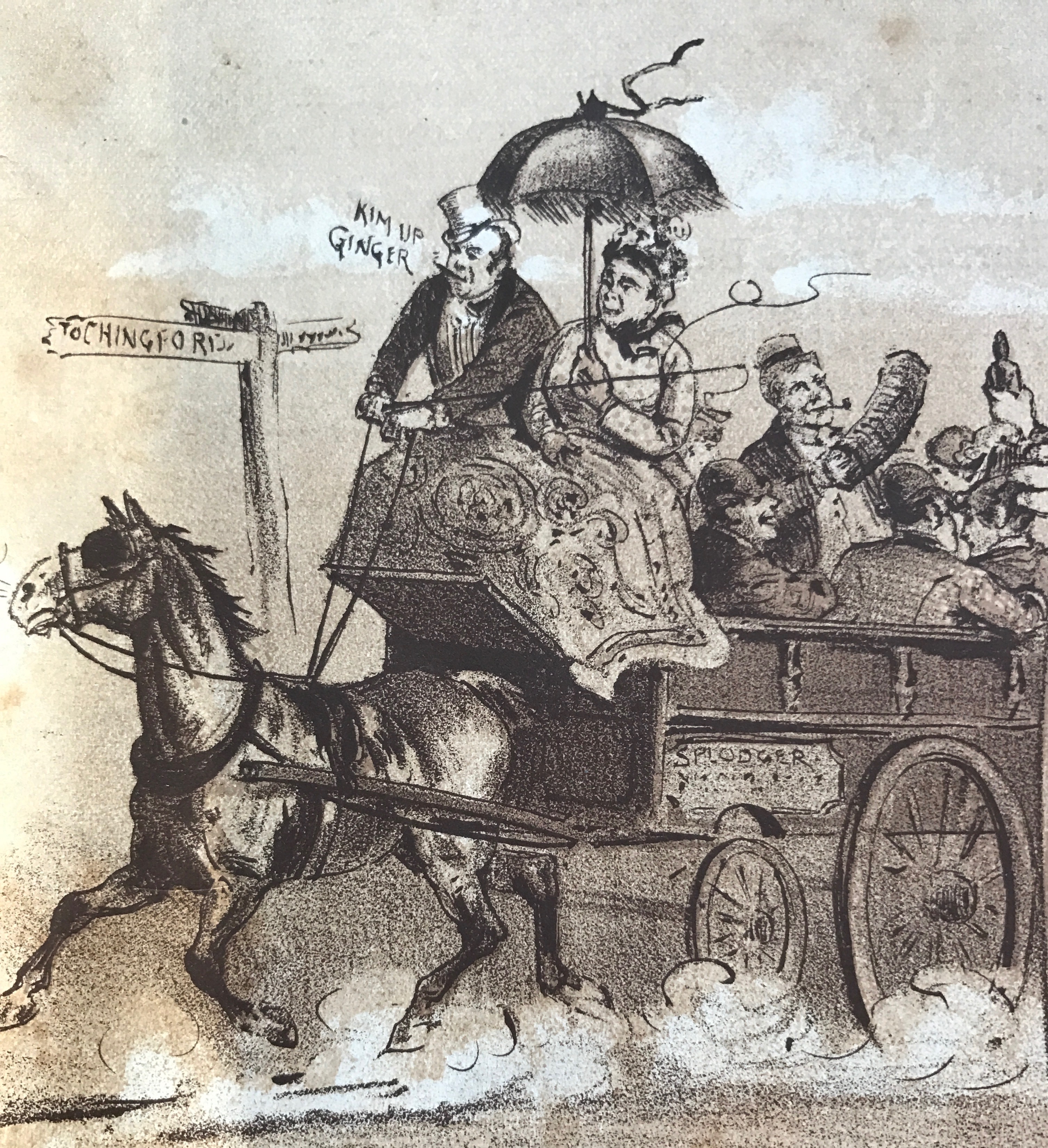 And a first-class prize for the best turn out,

They came in carts and wagonettes as well,

And which look’d best it was very hard to tell;

Says Brown “Give the prize now, for we cannot wait –

Stop! here comes Ginger, and he’s not too late.”

Then up I came with my little lot, And the lads yelled out, “Hooray!”

Some chairs for me pals,and cushions for the gals,

And the hearthrug looked all gay.

There were fourteen of us, and we all had whips,

And the missus she had hold of the brake;

I put ‘em all to bed, for everybody said

That my lot took the cake.

When we got down ’twas beautiful and warm

We quite took the hotel there by storm;

Then we all went in for the swearing prize.

Each lot as came all pulled up in a row,

And one by one we then all had a go

And oh! the language, how the beauties swore!

Then up I came with my little lot,

And the air went blue for miles;

The trees all shook, and the copper took his hook,

And down came all the tiles;

Then the donkeys cocked their tails and did a guy,

And brayed as if their hearts would break;

We asked Dick Dunn, and he told every one

That my lot took the cake.

For tea at six o’clock we all prepared,

And we didn’t care how the people stared;

The ladies stood in the gigs and flies,

And the next event was the “Beauty prize;”

But what with the dust and all their dresses spoiled,

The beauties all looked just a little soiled.

They tried to look sober, and smiled serene,

When Smith calls out, “Now which is the queen?”

Then up I came with my little lot,

She fell off her moke, and her funnibone is broke, 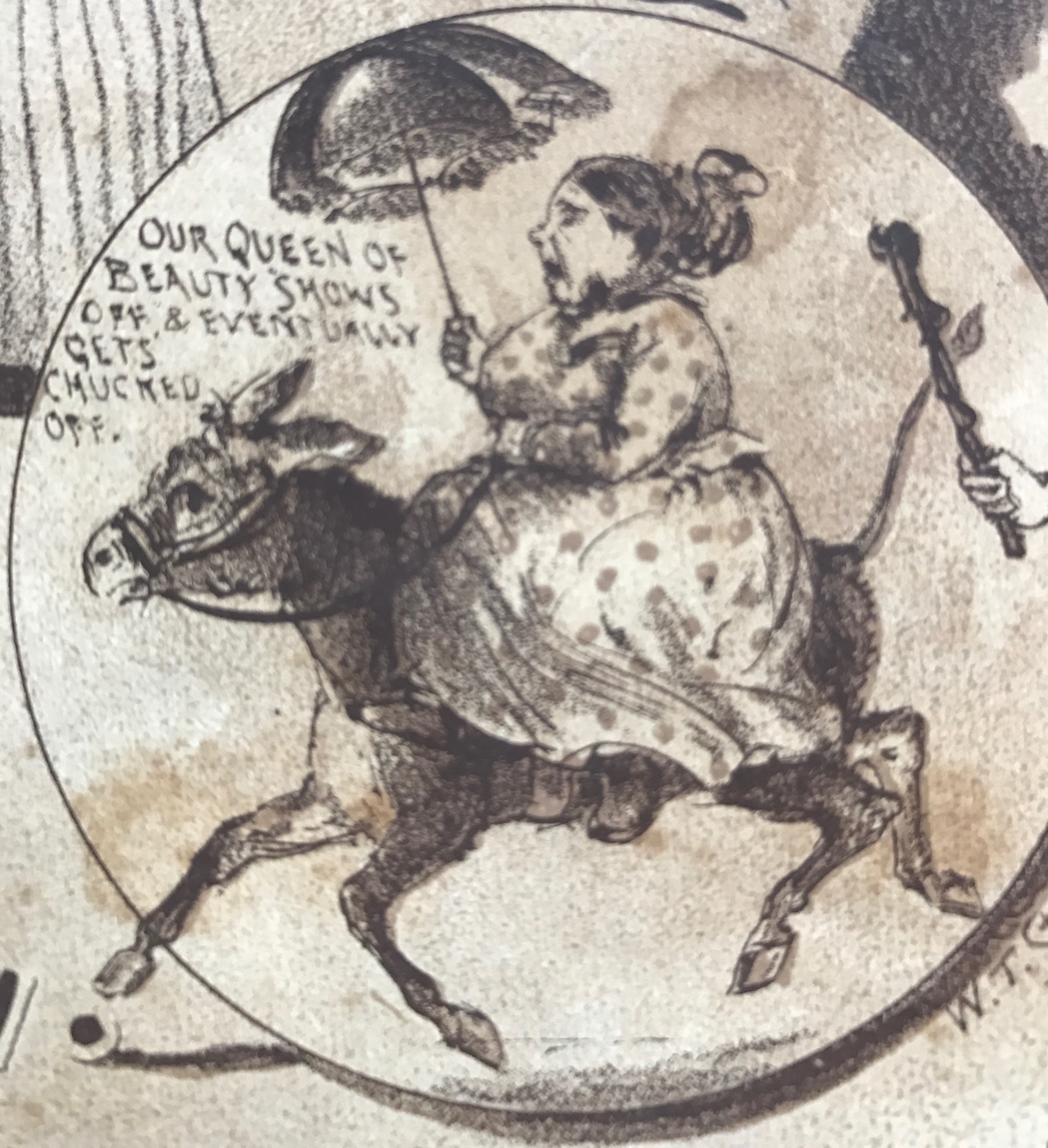 And her boko’s a little bit scratched;

She’s sixteen stone, and it’s every bit her own,

And the colour on her cheeks isn’t fake,

She’s forty round the calf,” then Brown began to laugh,

And my lot took the cake.

Encore verse – not on the recording

Next for home we started, all of us, hooray!

And the pubs we called at along the way.

we burnt red fire just to let them see

We’d all come home from a good day’s spree.

To believe our tales they all of ‘em refused;

Some said “Get out, why none of you are boozed.”

Says Brown, “I’ll show you if we’re not,

Then up I came with my merry lot,

And Brown says, “Where have they gone?”

They were all of a heap, and every one asleep,

With their bonnets and things all torn.

The P’lice got stretchers, and away they went,

And I’m jiggered if they would wake;

Say I, “Who says that we’re not half boozed?”

For my lot took the cake.

If I begin singing the song at the next home match, I hope some of you will join in…….