I have completed the vast majority of my research into the period 1885-94 so I thought I would publish my findings on Luton Town F.C. shirt colours.  I have set out below all the facts about shirts from the club minute books and the newspapers of the time.

I have kept this simple as I am not an expert on fabrics, dyes, fading, the effect of washing powders and chemical reactions (dyes are produced from mixing chemical together).  Discussing these issues in detail would be complex and open up many cans of worms.

11th April 1885 – from the Luton Town club minute book and the Luton Reporter – “colours to be Navy Blue and Pink”.   There is no known photo of this shirt.  We only have a 1926 Luton News article which confirms that the shirt was pink and dark blue halves.

12th August 1885 –  The club advertise for tenders for the navy blue and pink shirts and caps.

19th September 1885 – notice in the Luton Reporter newspaper that members should purchase a shirt in the club colours from Messrs Beecrofts (who won the tender) if they wish to play.  Beecrofts were a general clothing store in Bute Street and would have had catalogues available so that shirts could be ordered from the suppliers if they were not in stock.  In due course, the club would purchase the shirts and issue them to the players.  However, the principal that each player was issued, and kept and washed, his own shirt remained throughout this period.  [see note 1]

“obtain a guernsey [coarse knitted woollen top with crew neck] at 6/6 from Spratley’s.”

Spratley’s was the Sports outfitters in Barber’s Lane in the town centre.  This “guernsey” was purchased and the bill paid in early November.

December 1886 – the club minute book mentions the purchase of a “jersey” from Spratley’s for the same price of 6/6.

August 1889 – Annual General Meeting resolves to change the club colours, colour to be left to the committee.

“All who are accustomed to witness the matches will be glad to know that the Club has resolved to adopt new colours”.

It appears the pink and blue shirts were not that popular.

September 3rd 1889 – club minute book shows that the committee looked at sample shirts and ordered that a “Dark Cardinal, self colour.”  Self colour means a shirt of one colour.

“18 flannel shirts of the chosen colour be purchased.” [see note 2]

Team referred to as the “Reds” in all local newspaper reports from September 1889.  This, of course, means that, at this time the shirts were more red than a darker claret colour.  If they were of the latter colour then an alternative nickname to the “Reds” would have been chosen.

“The Luton men were attired in the familiar cardinal jerseys, while their opponents wore black and amber as their distinguishing colours.”

“all shirts called in.”

“15 Jerseys (club colours) should be obtained for the second eleven.”

“The Wolverton men went off with a rush and pressed for some time, but when the wearers of the cardinal shirts had settled down and become somewhat accustomed to the ground the game became very evenly contested.”

“The purchase of a number of white jerseys be left over until next meeting”.

There is no record that these were purchased.

“Luton Town v Edmonton.  “It was difficult at first to distinguish the players, the colours being almost precisely similar, but the Lutonians solved the difficulty by wearing white bands.”

Edmonton wore scarlet (see the 26th March 1892 entry below) shirts of a very similar colour to Luton.  Scarlet is close to cardinal.  It is also interesting to note that Luton wore “white bands” which I take to mean sashes.  A cheap and simple means of distinguishing the two teams.  I have never come across this before in all my wider research.  Another first for Luton Town!

“The visitors, following the example set by Edmonton a few weeks since, donned scarlet jerseys, and the onlookers witnessed the unfamiliar spectacle of several of the locals wearing white, though other members of the eleven adhered to the familiar cardinal.”

“That the colours of the club be Red, and dark blue or black knicks.”

“One other point I must mention and that is the change of colours adopted by the first eleven.  The shirts now used are more of a claret than a red but I suppose the team may be dubbed the “Reds” all the same.  The change is a distinct improvement, for last season’s colours were not wonderfully taking to the eye.”

The old Bury Park F.C. claret shirts appear to have been issued.

“Hon Sec obtain 6 red shirts and 12 white for players use.

“new shirts will be ordered for the first team, the old ones can go to the reserves.”  [See note 2.]

“The homesters wore white, the colours of the [1st Scots] Guards being the familiar red and blue.”

“This match was played on the Town Ground on Saturday afternoon, in excellent weather, before a moderate crowd.  The start was delayed through the operation of photographing the home team, who played in their ordinary colours despite the fact that the Uxbridge men were arrayed in bright scarlet.”

Again this indicates that at least some of the Luton shirts were close enough to a scarlet colour to be confusing to some extent.

The policy of ordering shirts piecemeal appears to have produced a series of slightly different colour shirts within Luton teams.  I do not wish to enter into the complex area of the effects of the sun on fabrics and the “different batches are always a slightly different colour” arguments.  However, even today it is recommended that when knitting a jumper, the balls of wool should be purchased from the same batch to ensure the colour matches exactly.

“By the way, I must say that the nether garments worn by the Luton players, are not particularly taking to the eye.  They look for all the world as though the committee had been on the look-out for bargains and had succeeded in picking up a cheap job lot. I should like to see a little more uniformity in both colour and length.”

Cost was clearly a bigger priority than uniformity.

The purchase of the claret Bury Park shirts in August 1892 was followed by the club purchasing “6 red shirts” in November 1892.  Then in October 1893 the first team got new shirts and the old ones went to the reserves.  Therefore if a reserve player broke through into the first team then there would be a difference in the colours of the shirts.  These subtle variations appear in the photograph below, taken in April 1894. 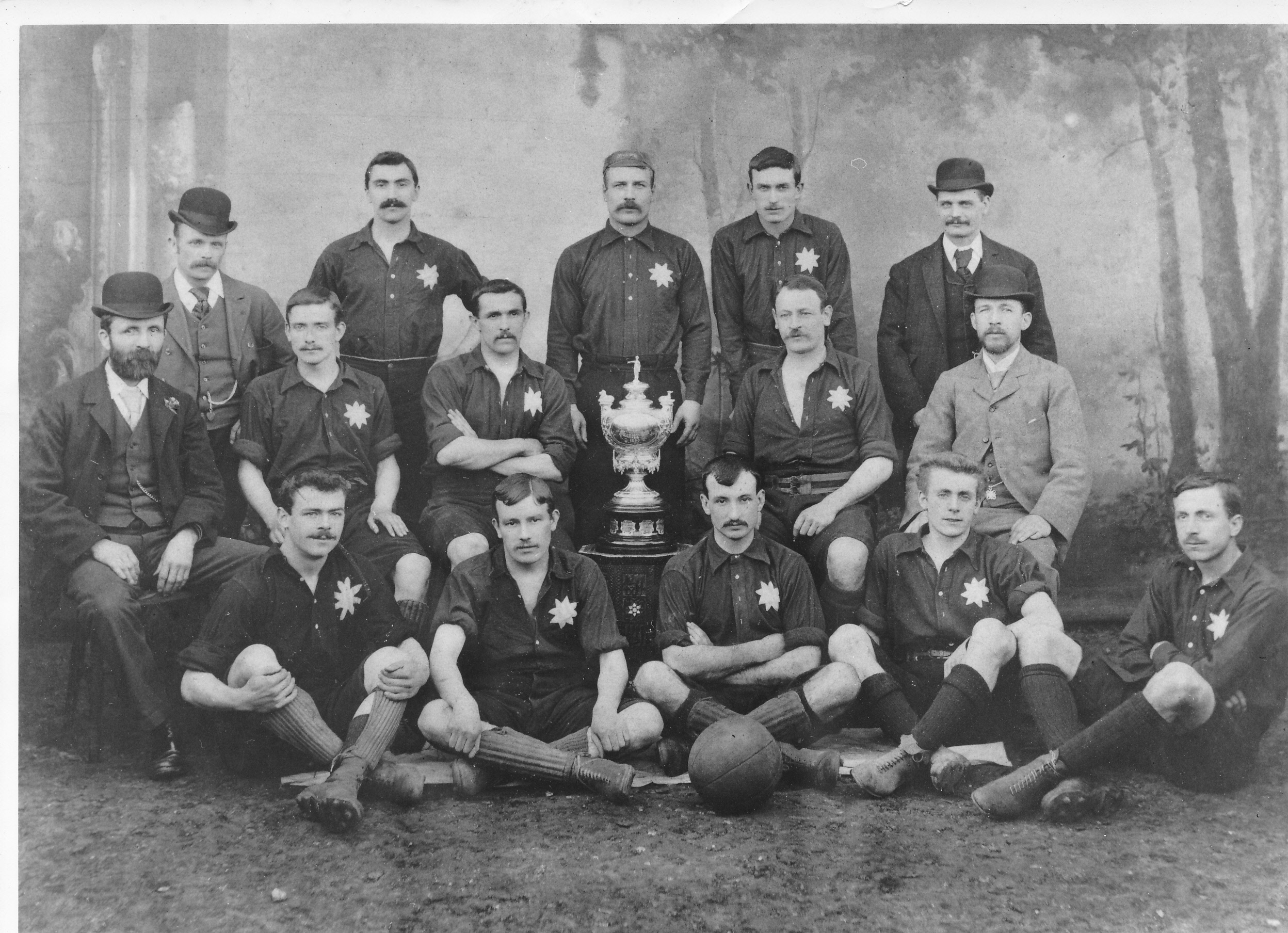 The shirt of William Brown, seated on ground far left, looks much darker than the others. Another good comparison is the difference between the shirts of the two players sitting next to each other, to the left of the trophy as you look at the photo.

My conclusions are that the colours of Luton Town were therefore as follows;

The whole team wore claret for a period after the Summer of 1892 after which the team wore a mixture of shirts of subtle variations – Summer 1892 until Summer 1896.

If new information comes to light then I will publish it here.  If you have any thoughts or comments then please email via the contact button.

Note 1 – If the club washed the team shirts then there would be a record of such dealings and definitely a record of the payments made.  There are no such records.  If we look at William Brown in the photo above in April 1894 we see his over sized star badge on his shirt.  That is the same shirt he is wearing in the April 1893 team photo (see the library – “looking back – newspaper reports).  The players kept their allocated shirt until relieved of them by the committee.

“Another large item was the purchase of club colours, which cost the Club £5 8s 0d.”

This means the shirts were six shillings each.