It was not until a Football League meeting in June 1909 that the Law was introduced that goalkeeper’s should wear distinctive colours to help the referee.  That is what the history books show.  However, a little research revealed a different story.  This is a short article, which I hope to add to as further evidence comes to light.

In early games there were two umpires on the pitch making decisions.  One umpire from each team had to identify which players were in goal so that the relevant rules on handling and carrying the ball could be applied.  When a referee (independent in important games) was introduced he also needed to be alert.  I have not found any direct incidents of mistaken identity during a game but I believe there must have been some confusion. 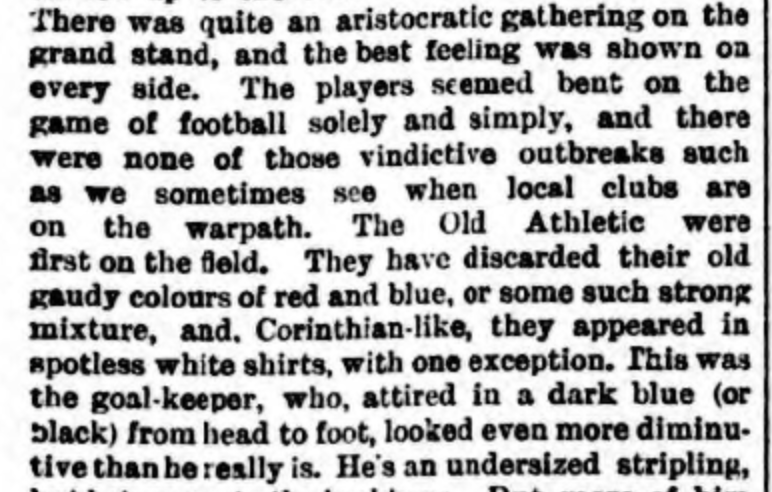 The above clip is from the Athletic News of the 18th October 1887 reporting on the West Bromwich Albion v Wednesbury Old Athletic game in the 1st round of the FA Cup.

Another clip, left, I have found is from the Buckingham Advertiser of the 18th March 1893,.

While two clips do not make a watertight case, it does appear that common sense was applied by some clubs and officials.

Barging the goalkeeper at any time was outlawed in 1894.  This meant that the goalkeeper could only be barged if he had the ball in his possession.  This made a quick identification of the goalkeeper even more necessary.

“The Luton players, it may be interesting to state, appeared in their new costume on Monday, vis,..white knickers and black and white striped shirts.  The goalkeeper’s shirt, however, was red and black.  The dress is a great improvement on that previously worn, and added much to the smart appearance of the team.”

There are no photos of the Luton goalkeeper in this red and black shirt that I can find.  I cannot find any reference to the distinctive shirt being used in a game.