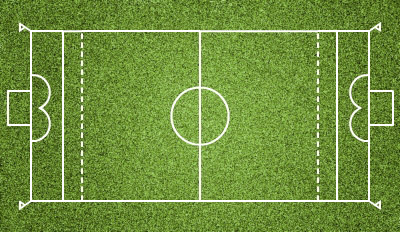 The pitch markings of 1891, left, were a mystery to me for a long time.  On reading the Laws of Game I learned that the six yard arcs were measured from each post.  The 12 yard line marked the area in which a penalty could be awarded.  The penalty kick could be taken on the 12 yard line at a point of the kickers choosing.  All opposing players, including the goalkeeper had to be 6 yards away.  The dotted 18 yard line was therefore introduced to keep the the outfield players six yards back.  However, as the kicker usually took the penalty kick from right in front of goal, the 18 yard line was often only marked for the width of the goal.

Time to correct the history books?

A search on the web and in the record books shows that the first penalty kick was in 1891 – for Airdrieonians at Broomfield Park and in England by Wolves against Accrington in September 1891.

Why then, did I find the following extract in the Luton Reporter about a game played on the 22nd November 1890 at the Dallow Lane ground between Luton Town and Old St. Mark’s?

“Presently, however, the home goal was attacked and in clearing Read [the Luton goalkeeper] ran several yards with the ball in his hands.  This being an infraction of the rules a penalty kick was accorded to the visitors in front of the home uprights, but after a stiff struggle the ball was got away.”

Was this a trial of the penalty kick?  Was it the first penalty in the world?  I decided to contact the Football Association for clarification.  After all, they are the governing body and should have the full history.  I must admit I have lost faith in the F.A. following the minus 30 points inflicted on the club.  I therefore had low expectations and my instincts were correct as the F.A. were unable to help. 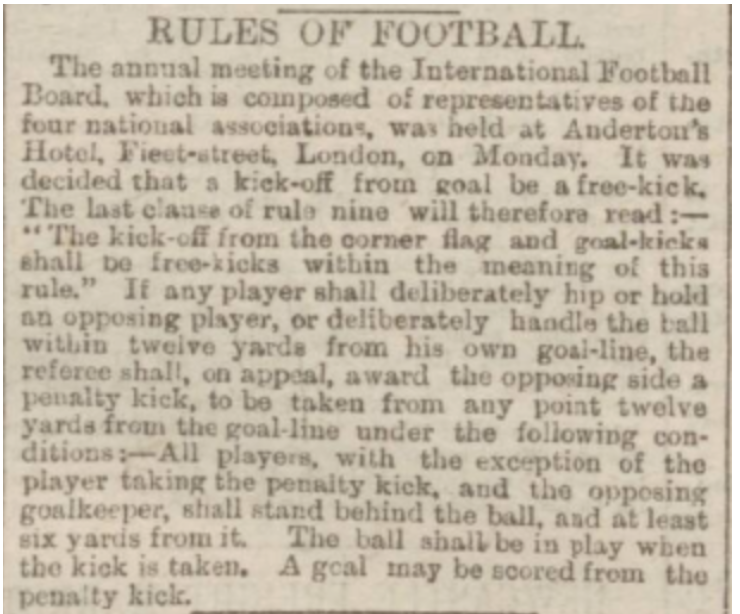 Undaunted I continued my research.  The clip (left), from the Sunderland Gazette of 4th June 1890 explains the reference to a penalty kick a year before the record books.  Many other newspapers covered this story.

Another quick look at the newspapers at the start of the 1890/91 season shows that the penalty kick was introduced in friendly and Midland League games.  The first penalty kick took place at Turf Moor on the evening of the 1st September 1890.  Darwen’s penalty was saved by the Burnley goalkeeper Kaye.  According to the Sheffield Daily Telegraph of Monday 8th September 1890, the first penalty kick in the world was scored by McGinnes of Burslem Port Vale.  It proved the winner in a 2 1 victory over Staveley in a Midland League match.

I hope the record books are amended in order to recognise the men mentioned above.     I also hope that the history books are amended to reflect that many football pitches were marked out as above for the start of the 1890/91 season.

The Laws of the game.

Law 13 together with clarification was published in the newspapers (below) in September 1891 when the Football League adopted the penalty kick. 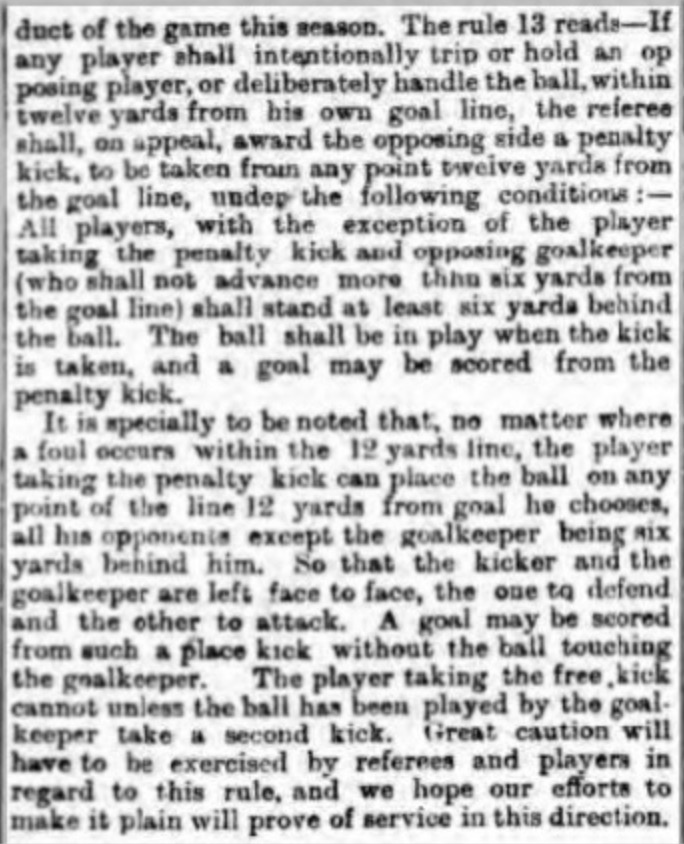 The instruction to clubs on the 18 yard line was also published, below. 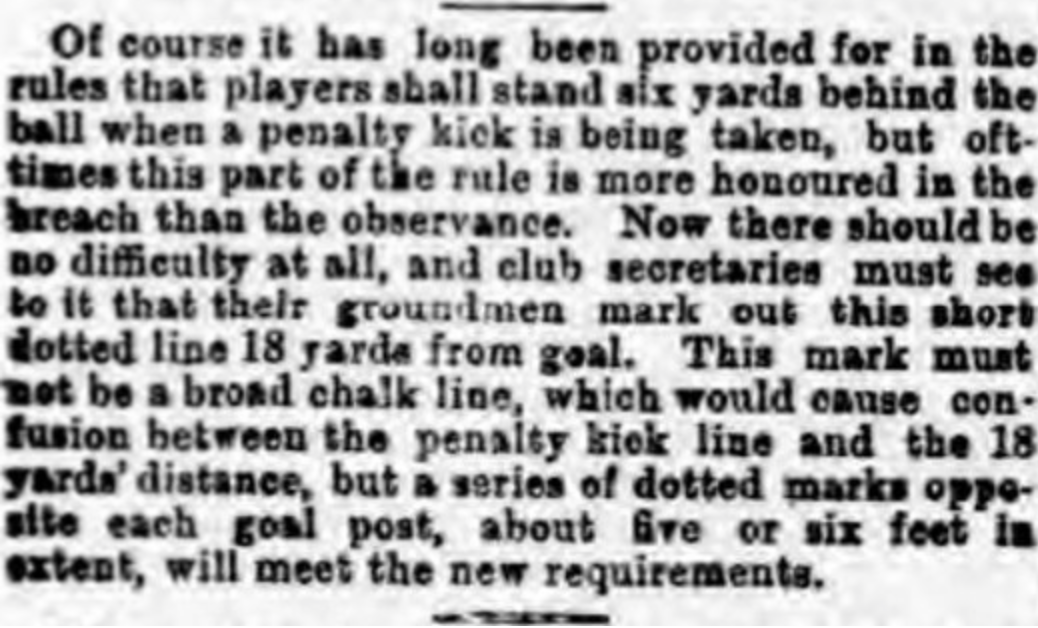 However, the 18 yard dotted line appears to been extended all the way to the touchline on occasions as shown in this photograph of the 1896 F.A. Cup Final at Crystal Palace. 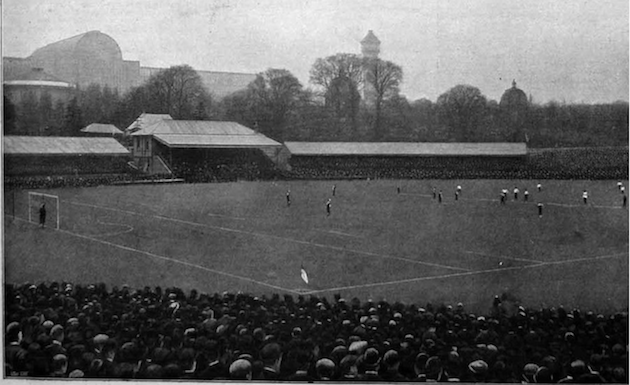 The Law on the penalty kick was amended in the Summer of 1892 as reported below by the Birmingham Daily Post of 14th June 1892.  This added the clause that the kicker could only have one touch unless the ball had been played by an opposing player. 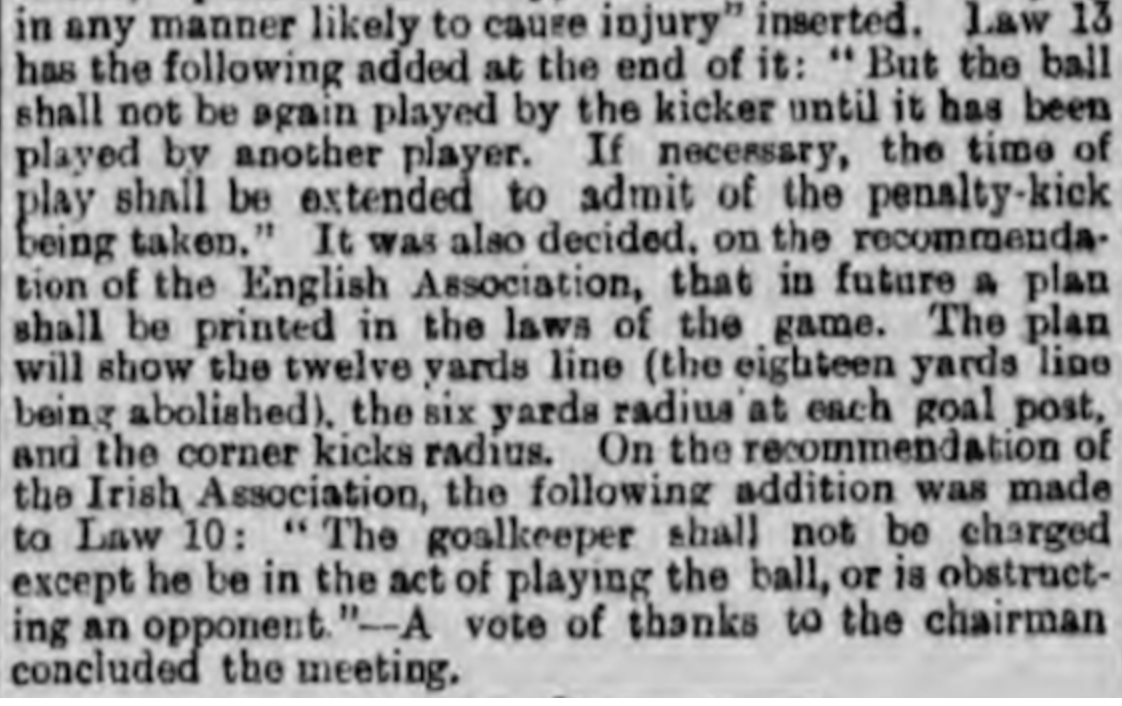 A problem for the referee.

When a penalty kick was taken right in front of goal there was no line for the goalkeeper to stand on.  The bra shaped 6 yard area did not help the referee ensure that the keeper was six yards away from the kick.  I wondered if a line was ever drawn across the two arcs thus making a six yard line (and a stepping stone to the rectangular 6 yard box).  I looked at many photos of the era which were inconclusive but I then came across footage of an 1898 League game between Blackburn Rovers and West Brom.  Look at the still from the footage, below.  There is a line linking the two arcs thus giving the referee some help in the penalty taking process.  There is also a central line marking the centre of the goal which looks like a pitch marking but it may be a scrape by the keeper. 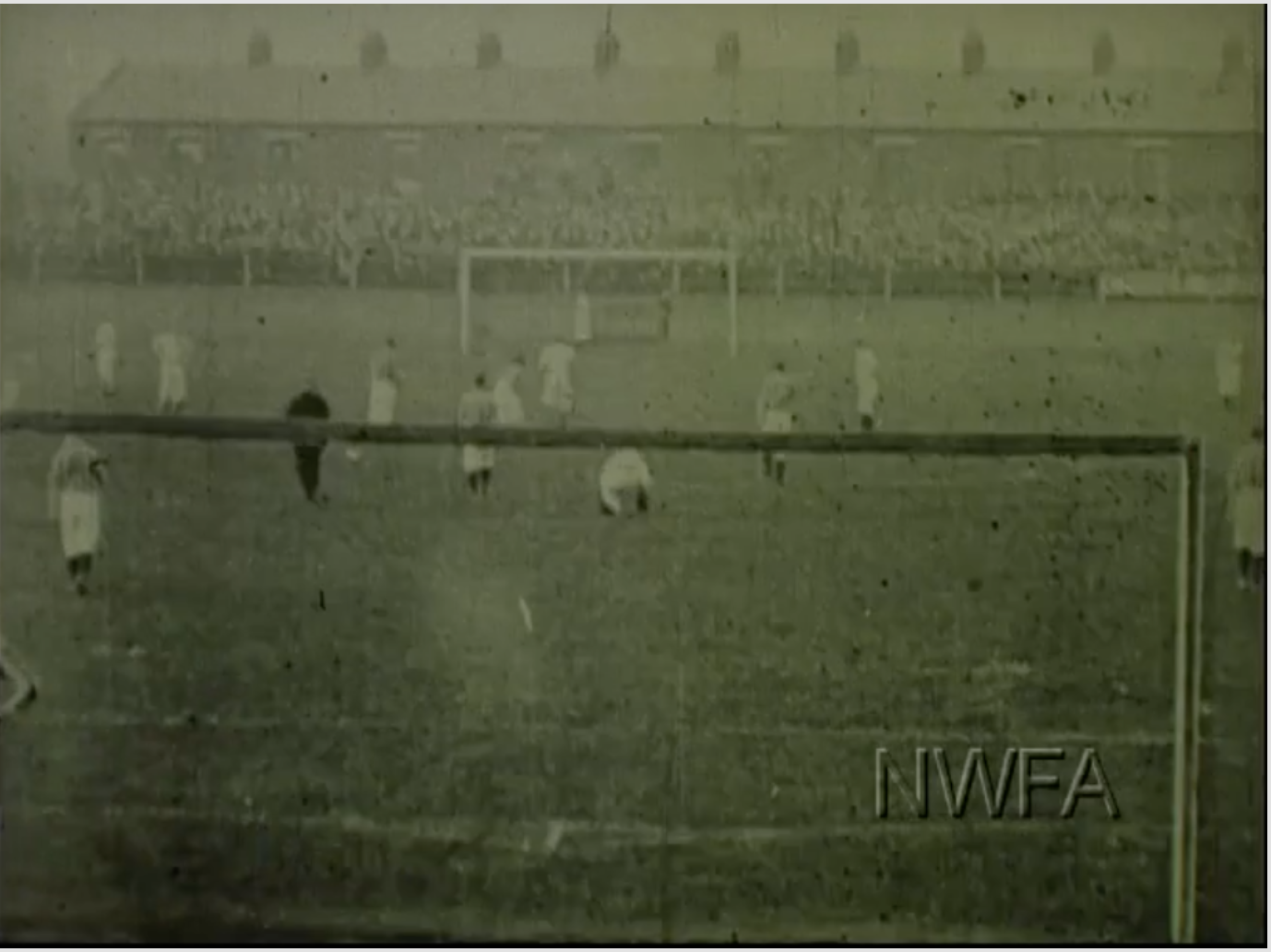 I discovered the following clip from The Wyvern” of the 26th October 1894.  It reports on a game between Leicester Fosse and Newcastle United;

“A penalty kick to the Fosse looked hopeful, but Miller failed to kick straight, though when the lengthy Ward had planted himself on the six yards’ mark there was not a deal of room to spare.  A lot of people have blamed Captain Brown for not giving Skea the kick. I may say Skea was told to take it, but he did not like the job, and Miller was called up.  To the latter’s credit be it said, that this is the first out of twelve penalty kicks which he has failed to score from.

A lot of theoretical footballers seem to imagine that it is the easiest thing possible to score from a penalty, but let some of them take one or two before a big crowd, and perhaps an important match depending on their efforts, and see how they get on.”

A further clip from “The Wyvern” dated 15th March 1895 reports on a game between the Fosse and Loughborough Town and confirms there was a central line for the goalkeeper at penalty kicks;

A later newspaper clip from 1901 states that;

“It is advisable to draw a dotted line showing the distance which the goalkeeper may come out to face a penalty kick.  Most clubs do this, but the laws of the game do not make it compulsory.”

It appears that such a mark was already in widespread use by October 1894.

And the final part of the jigsaw that made the rectangular six yard box is revealed in the photo below taken from the Illustrated Sports and Dramatic News of the 4th November 1899.  This game between the Corinthians and Sheffield Wednesday clearly shows the six yard line extended beyond the bra shaped arc. 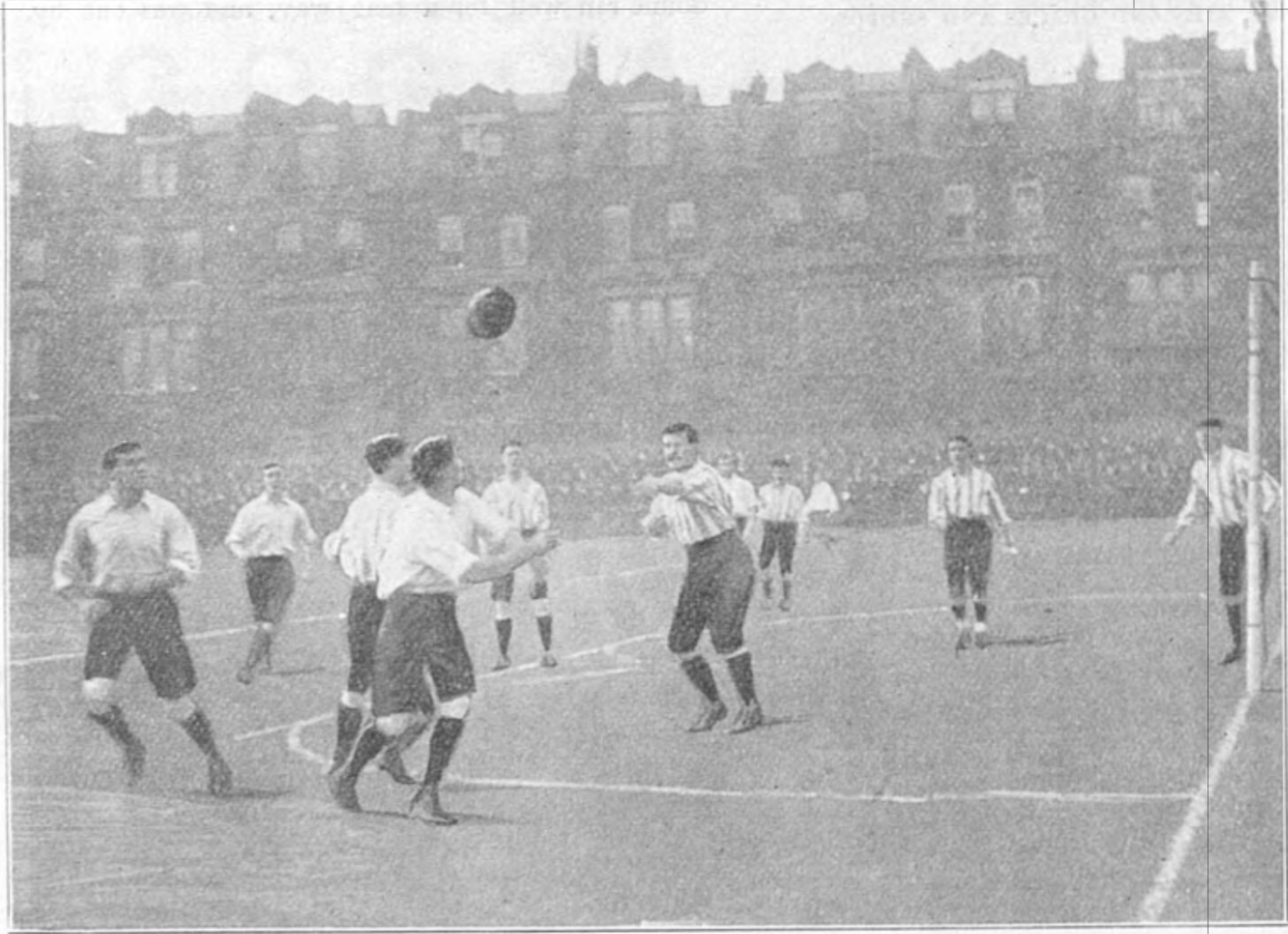 The next step was simple and in 1902 the rectangular six yard box that we see today was introduced.  The penalty spot was also introduced in the Summer of 1902

Thanks to the North West Film Archives.