Charity Cups were introduced with the spread of football across the country.  They raised money for local causes, usually a hospital, and clubs from a certain radius around the host town were invited to compete.  With the FA. Cup dominated by the posh boys and then the Northern clubs, many clubs saw Charity Cups as a good way to play more competitive games, test their mettle and improve the standing of the game.  Bedfordshire lacked it’s own F.A. and County Cup so for Luton Town the Kettering Charity Cup provided an opportunity.

The Northampton Mercury of the 6th October 1888, below, announced the birth of the Kettering and District Football Charity Cup. 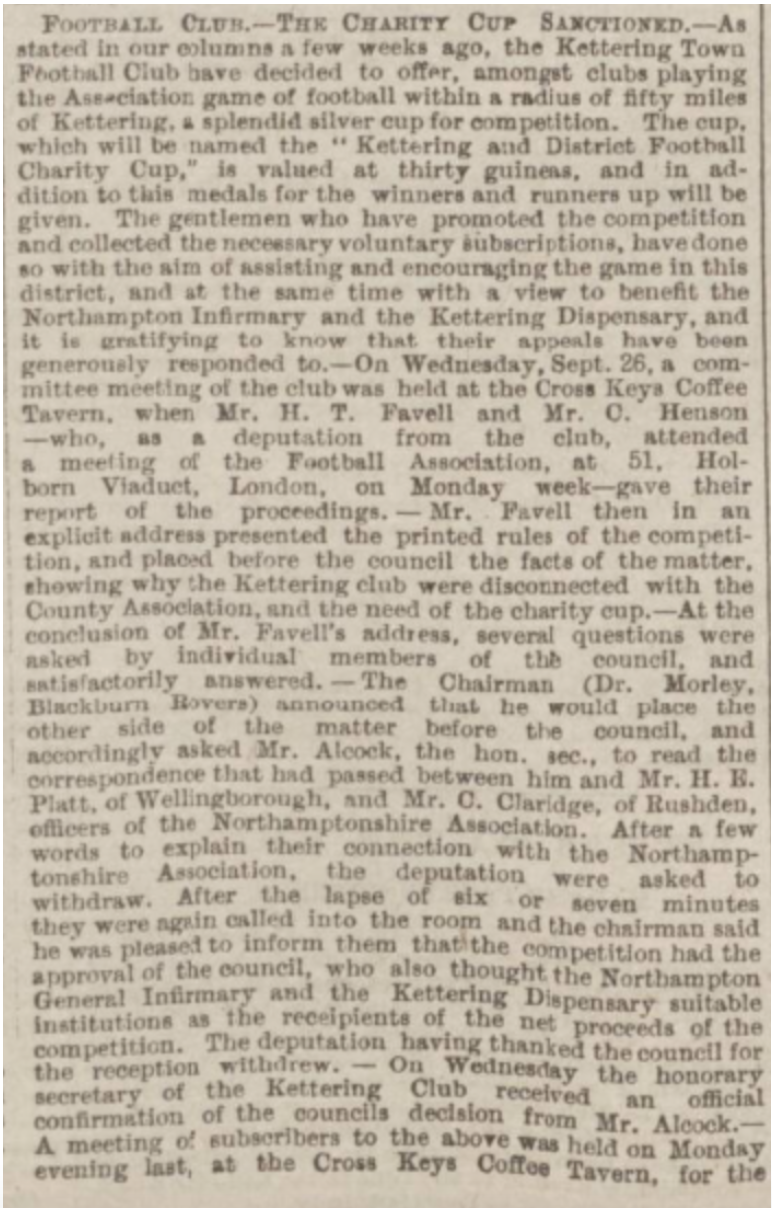 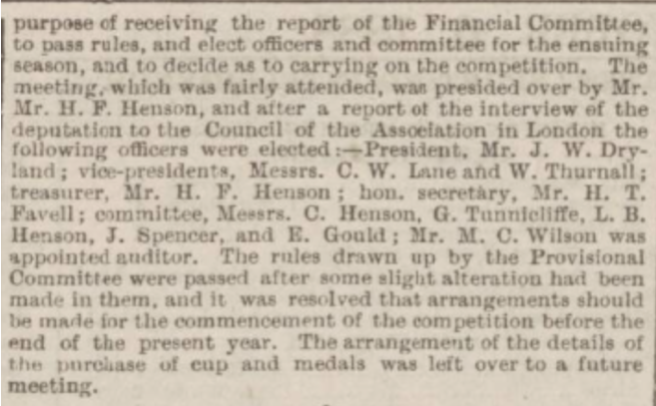 Below is from the Northampton Mercury of 15th December 1888 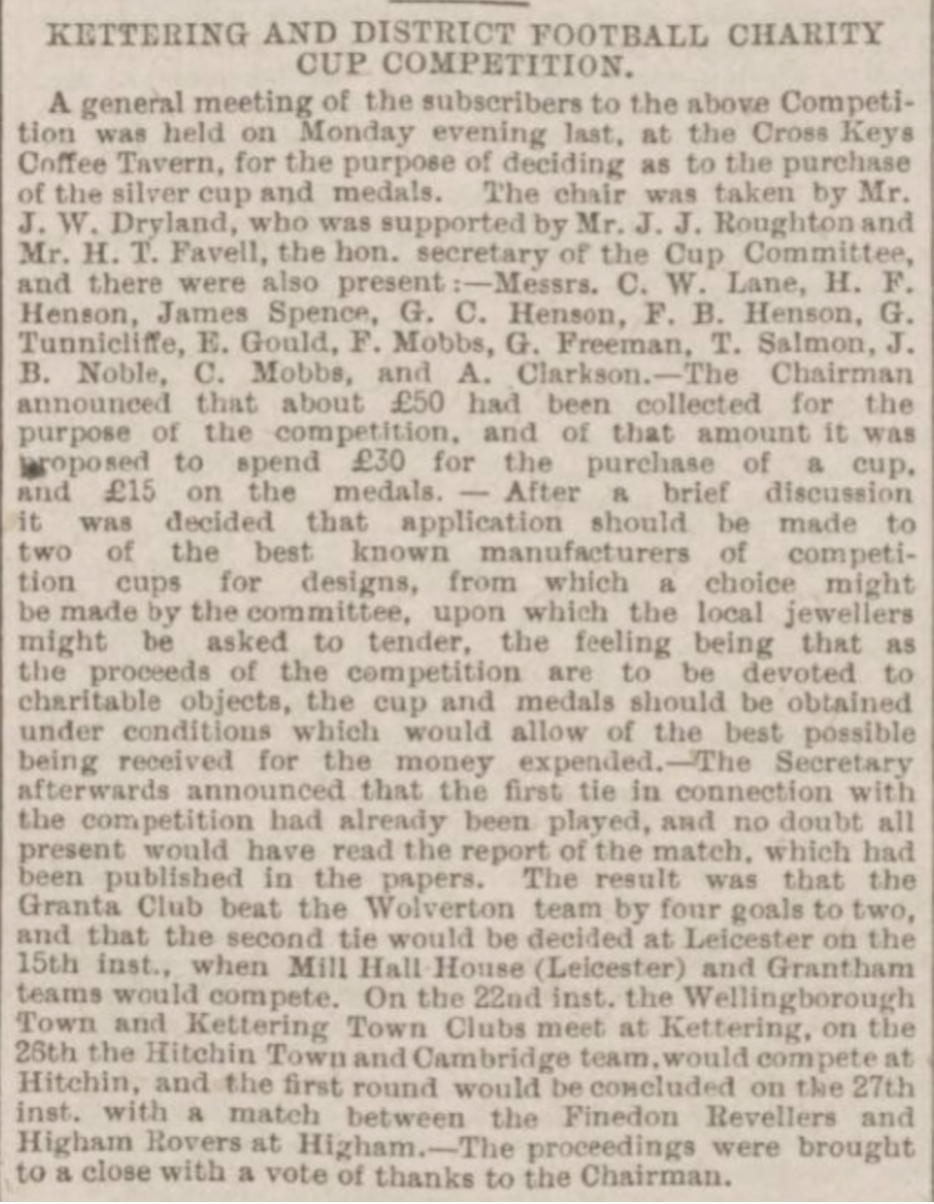 Grantham F.C. won the first tournament 1 0 against Cambridge Granta.  Luton Town entered the competition the following season, the full first round draw being as set out in the Grantham Journal of the 12th October 1889, below. 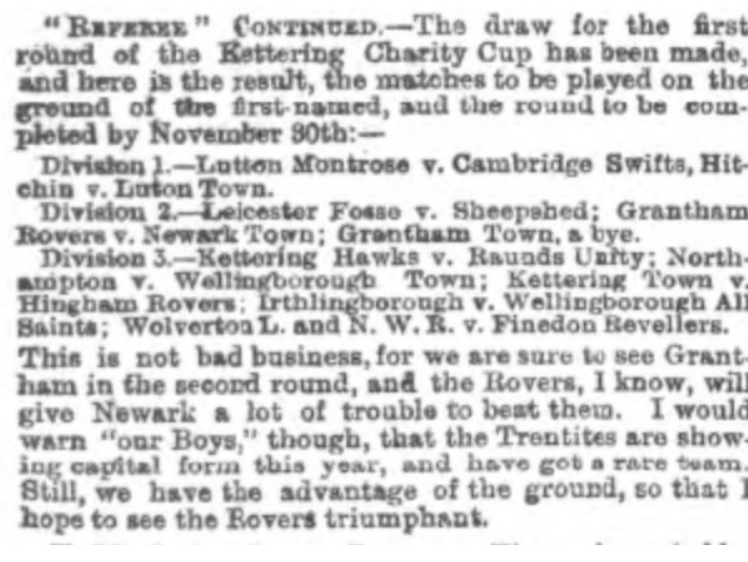 Luton Town made it to the final where they lost to Grantham Rovers after a replay.  The Gingerbread men would also triumph the following two seasons and therefore kept the trophy.  However, it appears that the town could not support a professional team for long.  The trophy had to be sold off as set out in the following clip from the Lincolnshire Echo of the 27th August 1897;

“It has finally been decided that the Grantham Rovers Football Club shall be disbanded for the ensuing season.  Having the incubus of a debt amounting to £140, and lacking supporters, the Committee cannot see their way clear to continue the organisation, and the guarantee of the overdraft at the bank have also come to the conclusion that the wisest course is to “throw up the sponge.”

Three valuable cups in the possession of the club will be sold, and the proceeds go towards paying the debt while in the autumn a smoking concert will be given, the expenses of which Capt. Russell, president of the club, has promised to bear, to provide funds for the further satisfaction of the creditors.”

A new trophy was purchased for the 1892/93 competition.   We have a photo of the first winners, Rushden with the trophy – centre below. 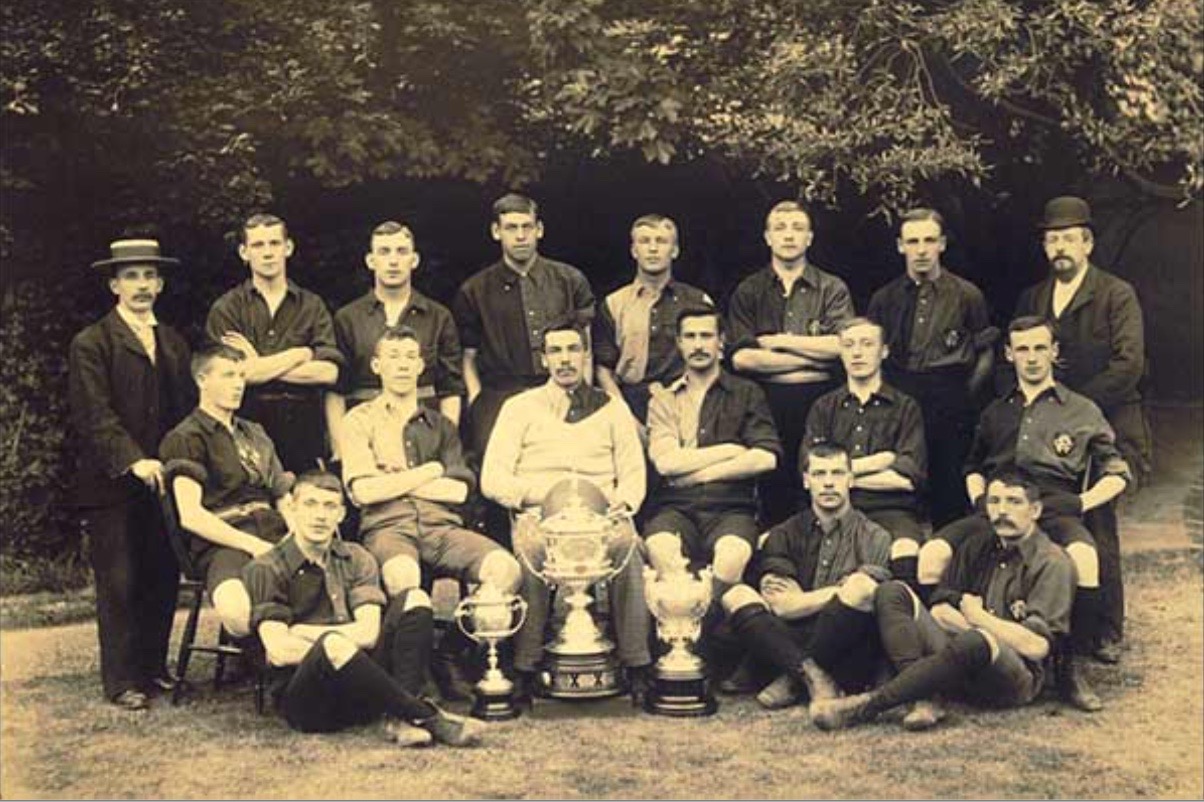 Below are the 1894 winners, Leicester Fosse with the trophy. 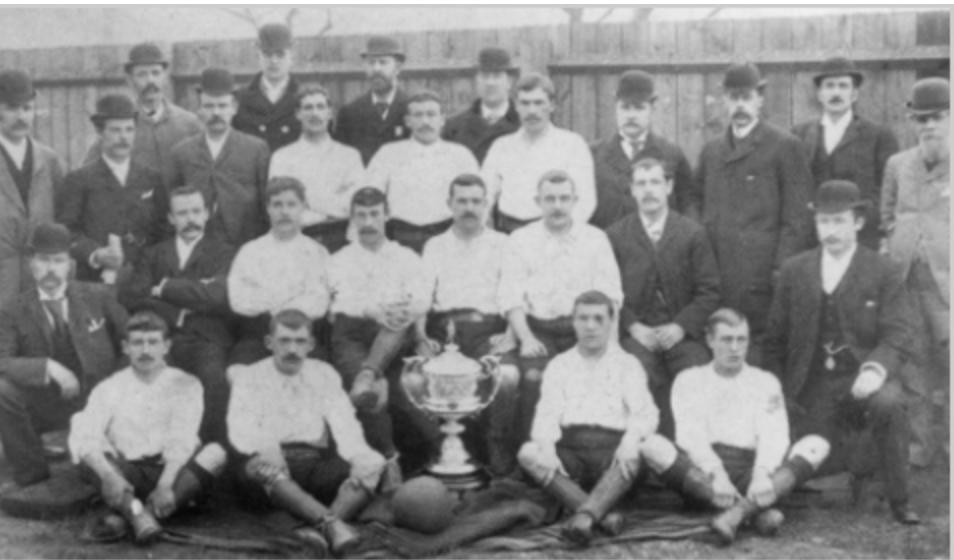 The 1895 winners were Burton Wanderers, below. 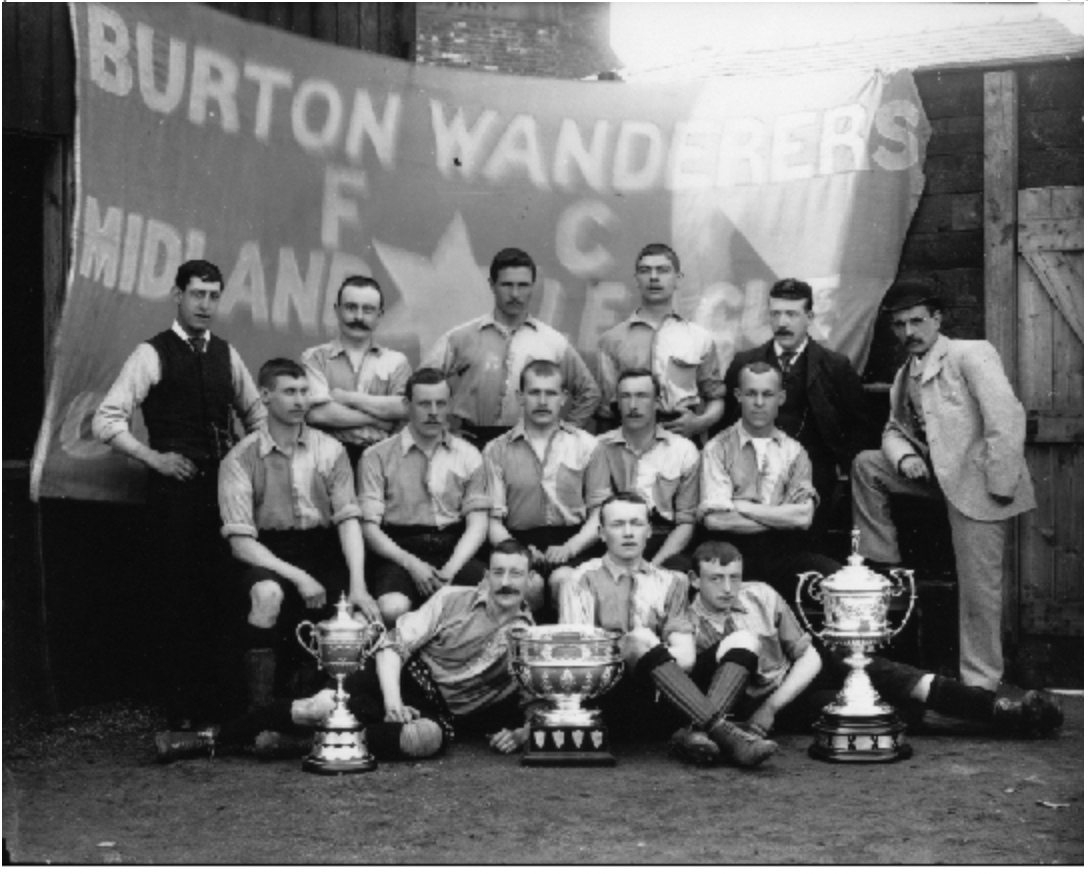 Luton Town won the Kettering Charity Cup in 1897 by beating Rushden 1 0 in the final with a goal from Gallacher.  The medals were gold in the shape of a shield and bore the name of the owner.  The runners-up medals were silver.  The Luton News of the 25th March 1897 reports on the teams arrival back in Luton after the victory. 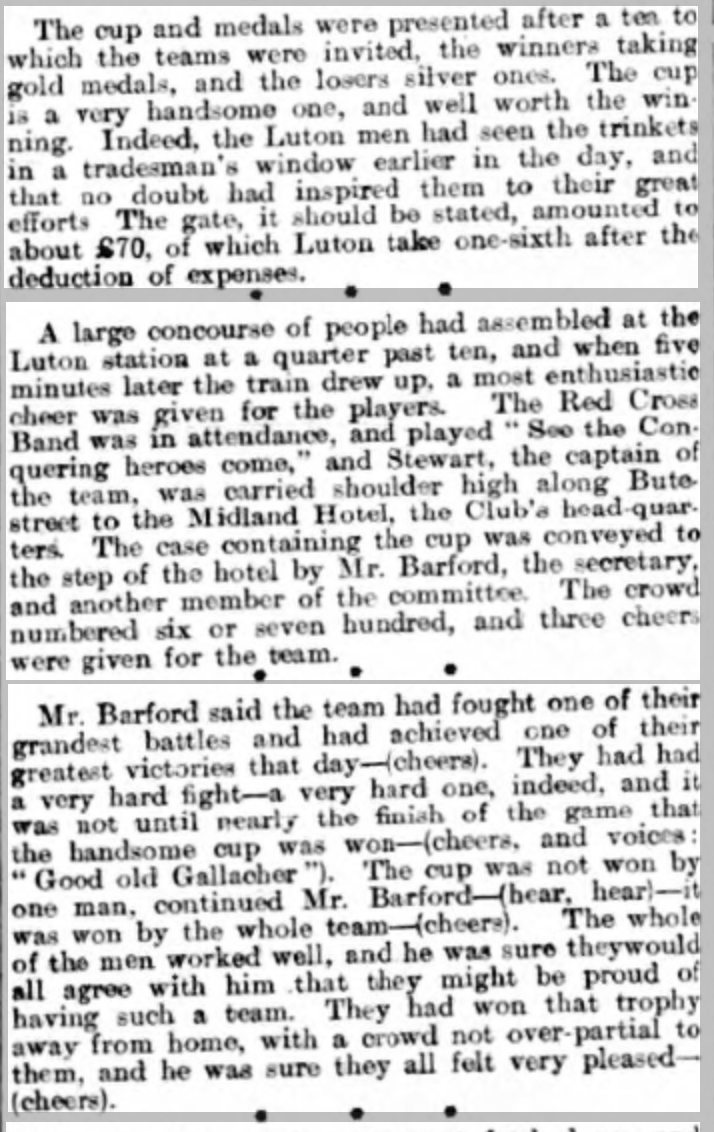 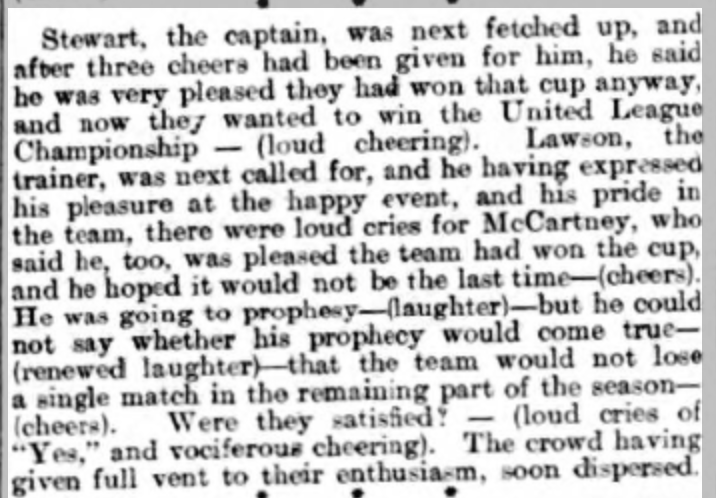 From 1897 only the Kettering Hospital benefitted from the proceeds of the competition.

2.  I have noted the venue of North Park where specifically mentioned in reports.

Having won the second trophy three times it appears that Kettering kept it.  I have not been able to locate its whereabouts.  If anyone knows please get in touch via the contact button.  It is possible that both trophies were recycled and exist today as the prize in another competition – as does the Luton Charity Cup.

Charity Cup competitions served their purpose in the early years of football in the region.  The Luton Times of the 26th March 1897 sums up the contribution of the Kettering Charity Cup nicely;

“It was the first competition of its kind in Northamptonshire, and has given a greater impetus to high grade football in that county than any league or association, for it encouraged local talent in “the days of yore,” when encouragement was needed.”