The first Hall of Fame entry I compiled was of D.A.N. Lomax, the Luton Town player who joined the army and died with the 41st Welch Regiment at Driefontein, South Africa in 1900.  As my research progressed I gathered more details of the part played by the Army and their influence on world football.  This short article sets out my findings.

A fact that stays with most of us football types is that the Royal Engineers lost the very first F.A. Cup Final in 1872.  They won the trophy in 1875 and lost in the final again in 1874 and 1878.  Their leader, Captain, later Major, Mandarin became President of the F.A. in 1874.  The Royal Engineers, photo below, are credited by many to have played the “combination game” well before the Scots.  This system relied on team work rather than individual dribbling ability. 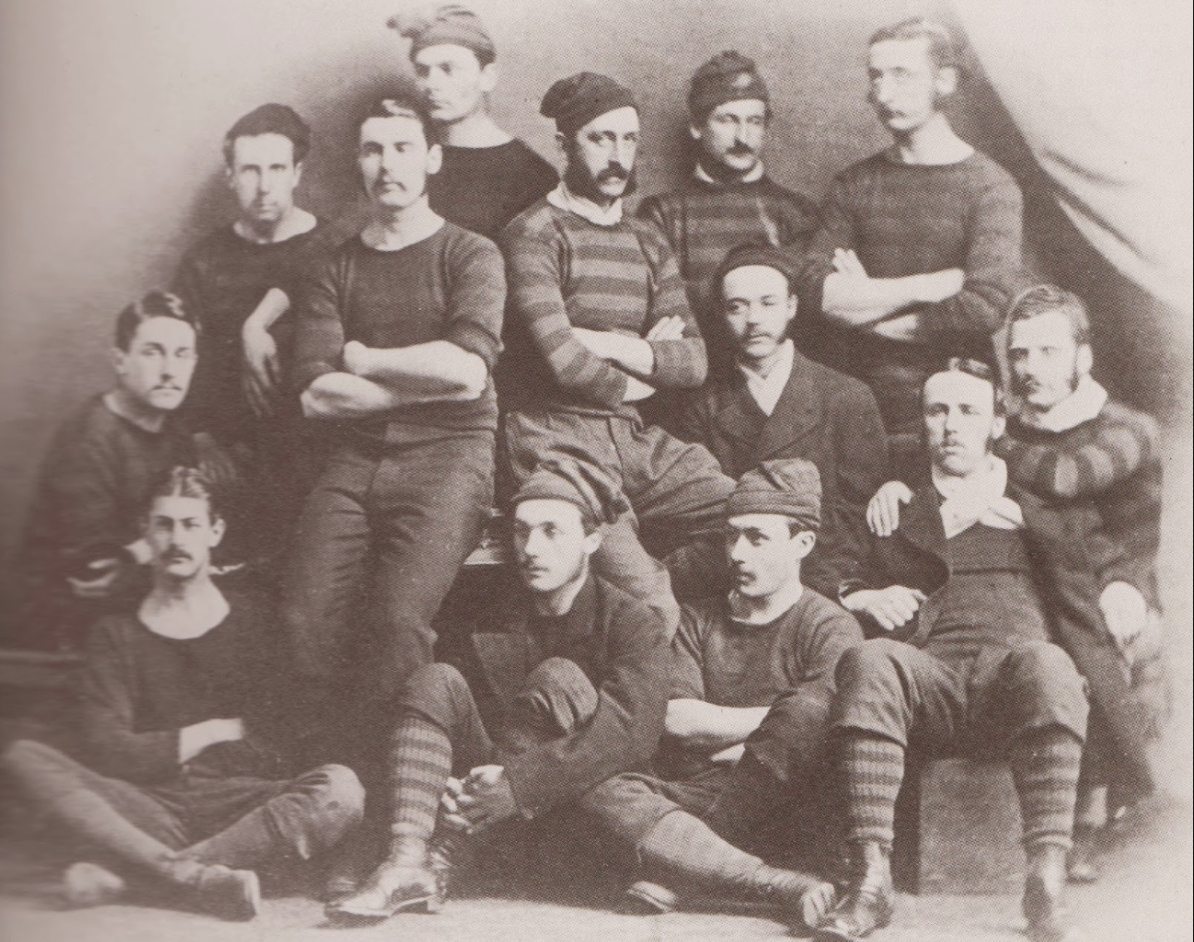 When Luton Town played the 93rd Highland Regiment at home in the 1890/91 F.A. Cup, the Straw Plaiters took a bad beating, 7 0.  The Luton Reporter summed up the soldiers combination game as follows;

“It is an undeniable fact that the visitors were far the better team.  Their combination was all that could be desired, admirable short passing and correct heading being characteristic of the whole of them.  Few mistakes were made, and the men were always in their places, thus avoiding the confused rushing to and fro which is so frequently witnessed.  The members of the team relied upon one another, and the result was as might be expected.”

Why were Luton so outplayed by soldiers?  The Luton players were amateurs, working men who had to find time for practice.  They worked on Saturday mornings then had to rush to the game, often turning up late and delaying kick off.  The three best Luton players did not practice with the rest of the team as one lived and worked in Bedford and two lived in South London.  Time to talk tactics was also limited.  The team was chosen by committee, usually older men who might be out of touch with the rapidly advancing game of football.   Any dispute on team selection was resolved by ballot amongst the committee.

The soldiers on the other hand were quartered together, fit, healthy and given time to practice together.  The soldiers were receptive to instruction and use to sticking to a plan.  They would also have had a leader, someone use to assessing the merits of an individual and being ruthless in team selection.  I assume that as battalion/Regimental pride was at stake the players would have been given certain benefits.  Finally, as the first article below says, the army men had an “esprit de corps” that amateur clubs may have lacked.

The 93rd Highlanders victory at Luton was not an isolated one.  Army teams did well throughout the Victorian period such as the Second Scots Guards who won the Middlesex Senior Cup in 1892, 1893 and 1895 and were runners up in 1898.

The attached article from the “Army and Navy Illustrated“ from December 1896 gives us some further background. 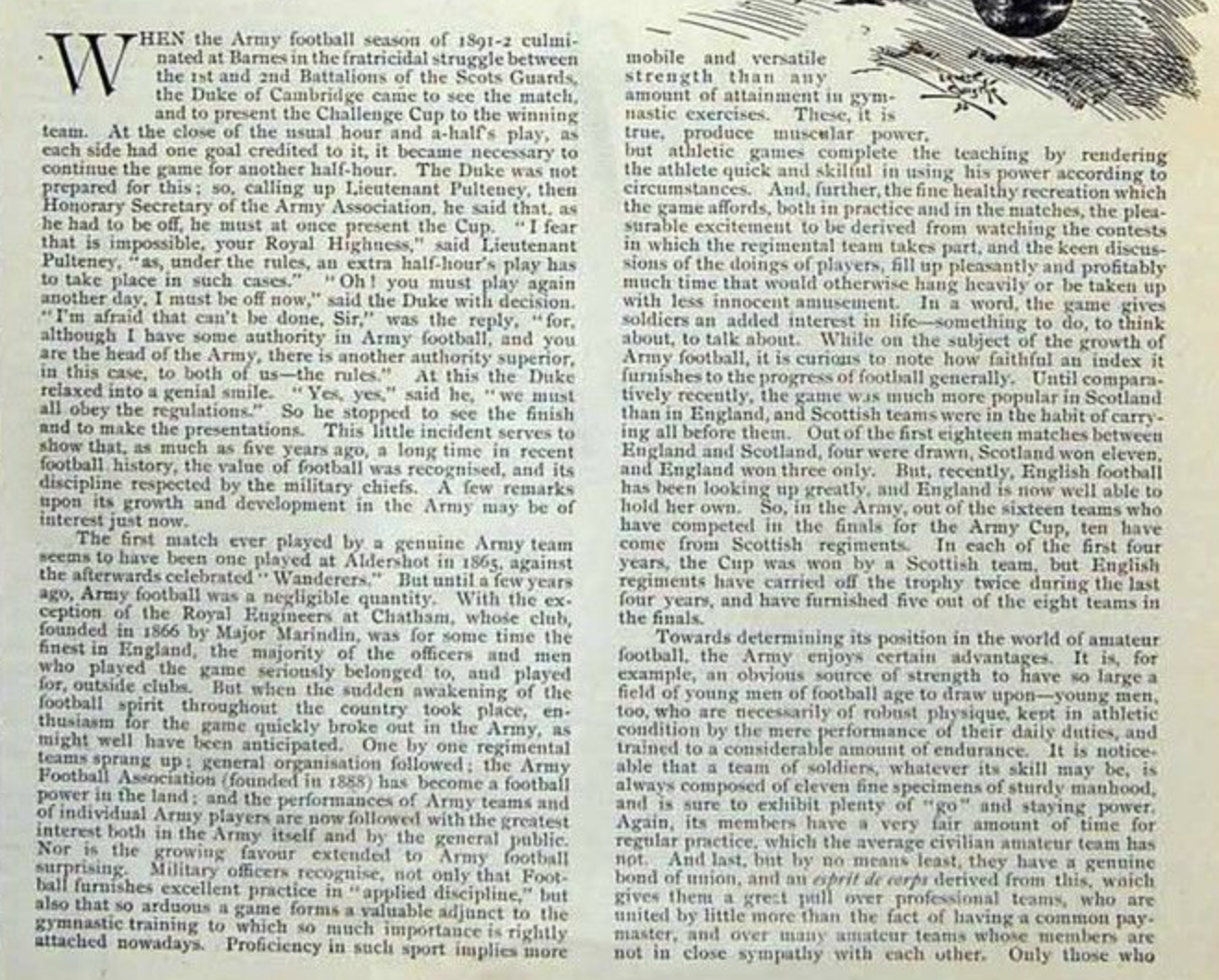 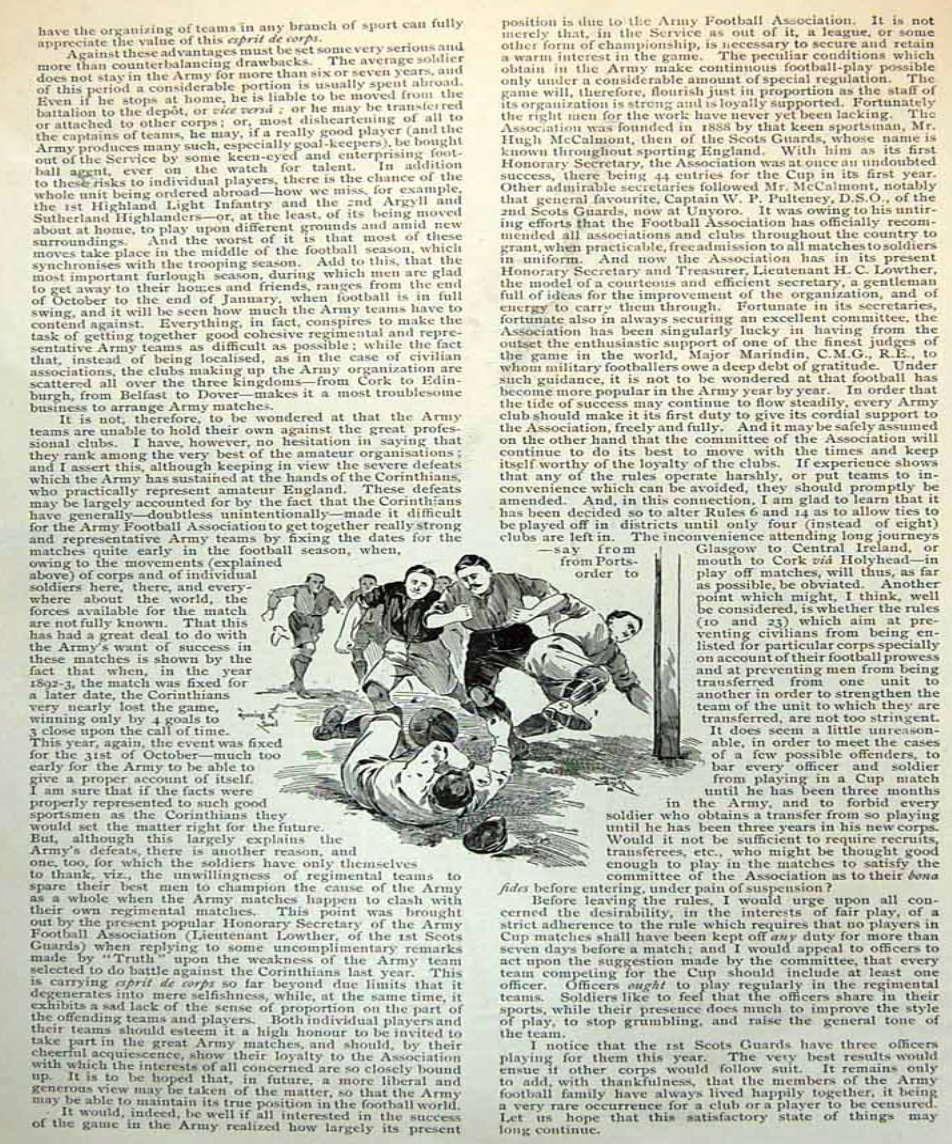 The Army Football Association was formed in 1888 and the first cup competition was won by the 2nd Battalion Argyll and Sutherland Highlanders, photo below, in 1889. 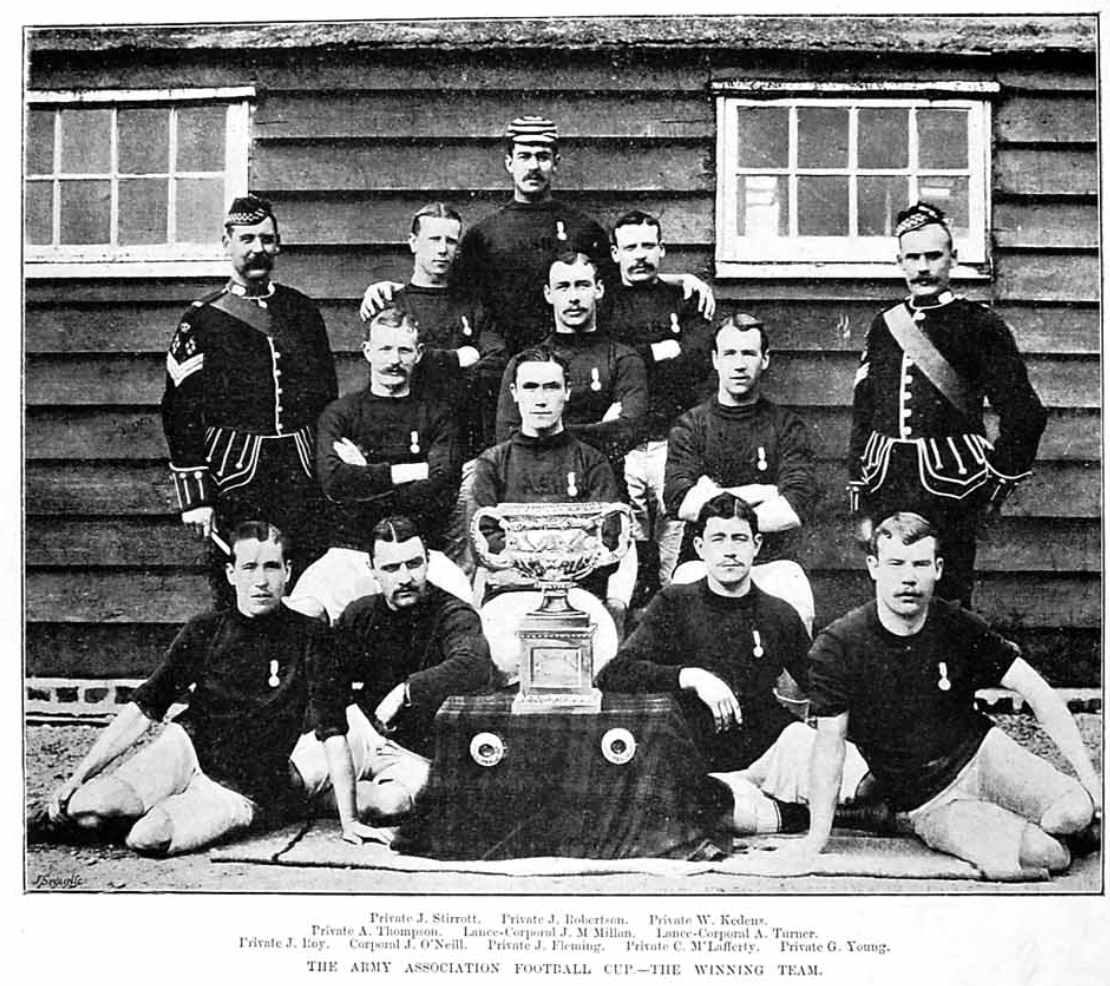 There were of course weaknesses in Army teams.  As soldiers, they had other duties besides football to perform so entering a League was difficult but not impossible.  Posting abroad was of course the biggest obstacle in the progression of Army teams. However, that did have a benefit to world football.  In Interlude One I mentioned that in 1885 this country was fighting in Sudan, Afghanistan and Burma.  I came across the sketch below from the Graphic in April 1886. 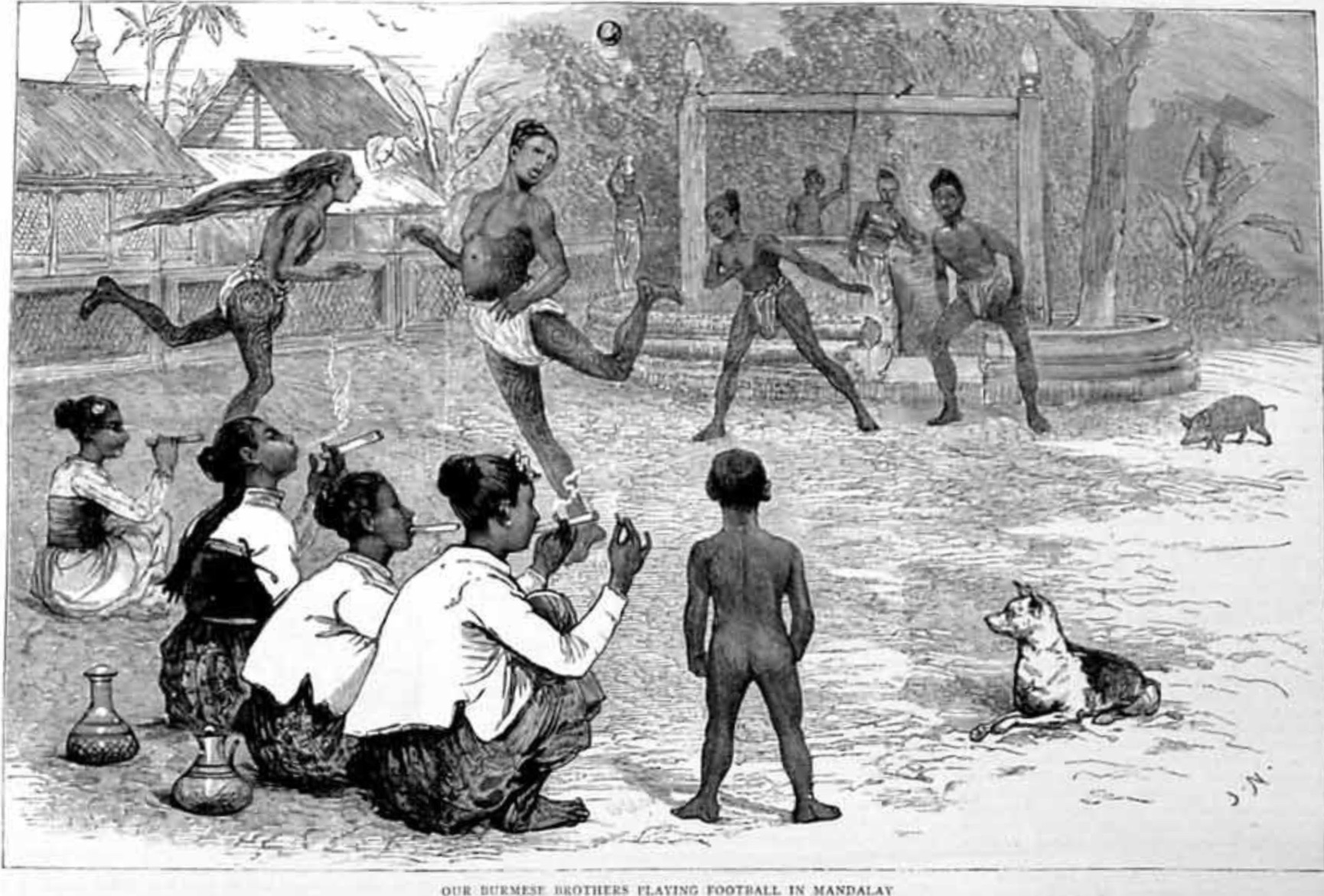 Note the mention of “our Burmese brothers” which will help dispel the myth some hold that Victorian society was a racist one. 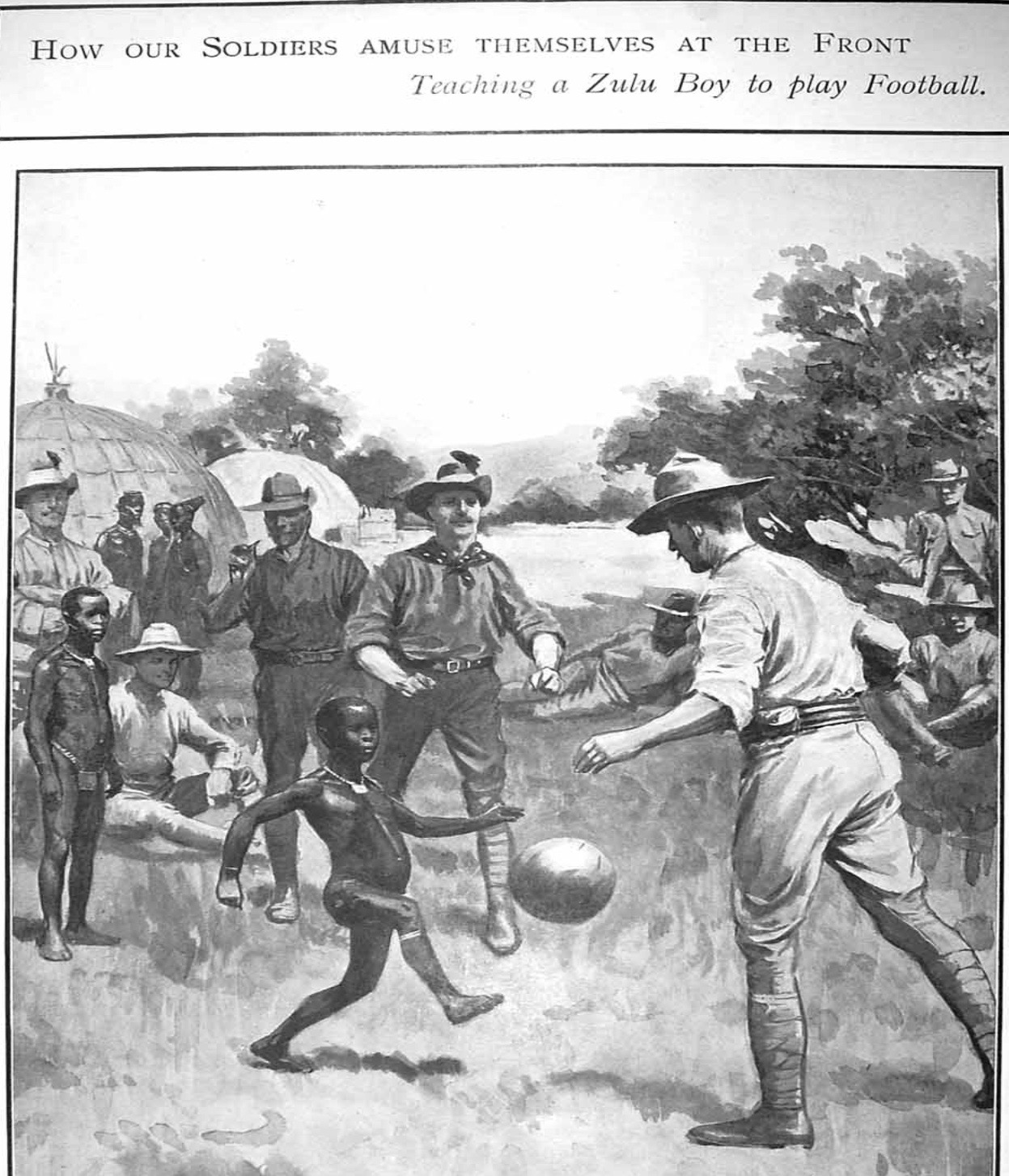 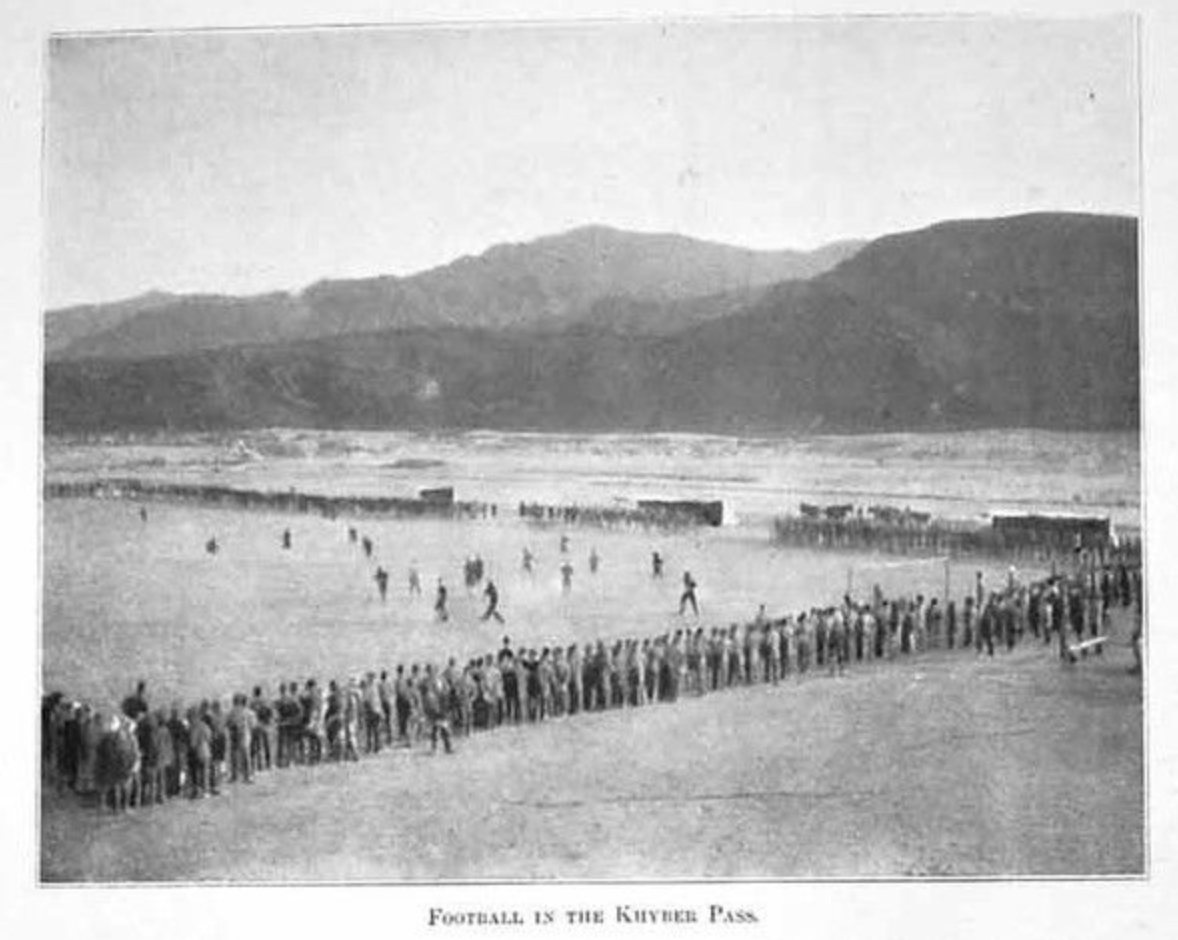 The photo below is said to be from the Boer war though it is probably later judging by the pitch markings. 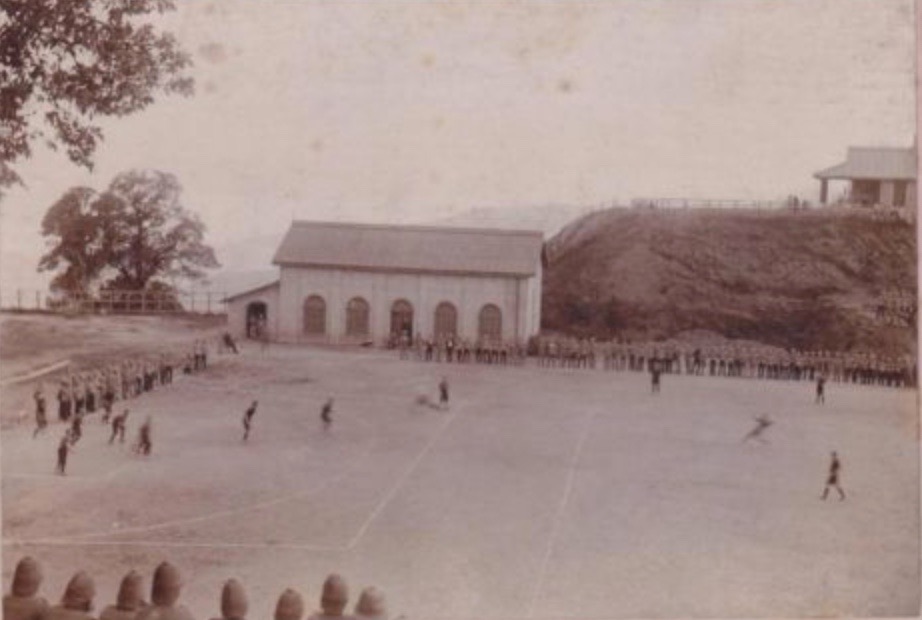 The photo below shows 2nd Royal Berkshire Regiment, the winners of the 1899 Frontier Charity Cup in South Africa (from the 28th January 1899 Illustrated and Dramatic News). 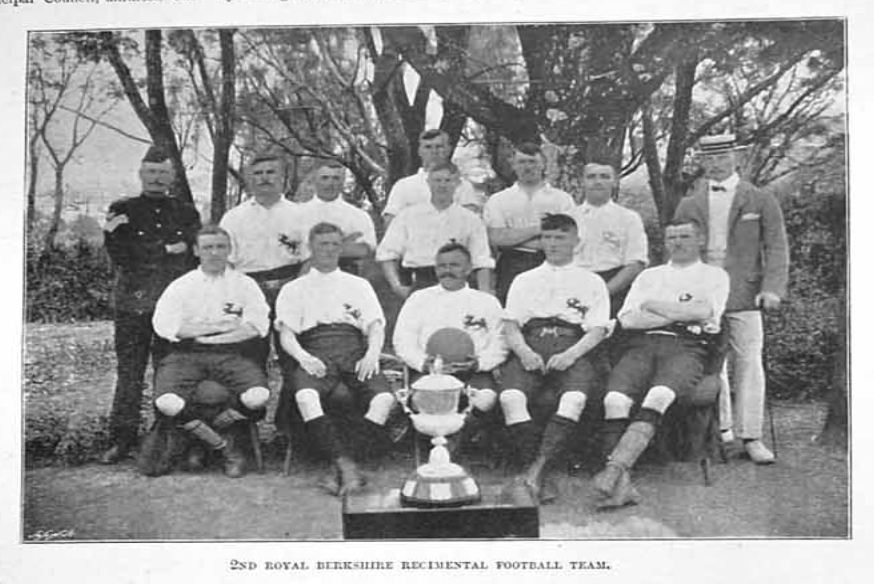 The above illustrations say it all.  Wherever the army went in the world, football went with it.  They lads played each other and taught the locals.  Football was, is and always will be, a unifying force between peoples.

Thanks to the mentioned publications.

I have placed the Army football team photos in a separate section in the Gallery – “other clubs team photos.”