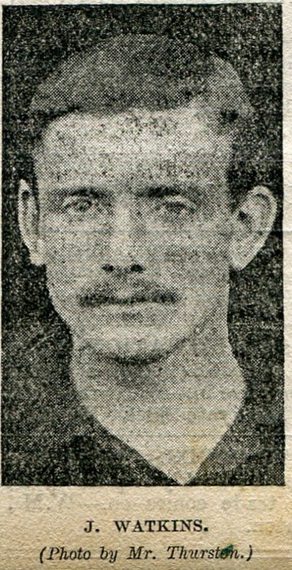 His parents, Robert and Emma, both came from Pepperstock.  Joseph was born in Slip End in 1875.  The family moved to Luton and lived at 125 Castle Street in 1881.

Broke into the reserves in September 1891.  Debut for the first team was on the 22nd October 1892 when Chesher was injured and Connie played at inside right against Nottingham Forest.  Had a good run of games in the first team that season as a forward in on the right or left.  However, he was a half back.  He moved there at the start of the 1893/94 season and he kept his place. The club committee agreed on the 18th September 1893 “that Watkins be signed on at once to be paid on the same terms as the other Town players from the time he commenced play”.  He dropped back to half back and held his place all season alongside Julian and Arthur Taylor.  He played in the final of the Luton Charity Cup in 1894 so holds a winners medal.

He married Francis Morton in early 1899 and by 1901 he was still a  Straw Hat Blocker living with Fanny who is aged 24 at 37 Bailey Street, Luton

No record of any marriage or children.

Moved to 30 Peache Street Luton where he was residing when he passed away in 1927.  The Luton News of 29th November 1927 published the photo below