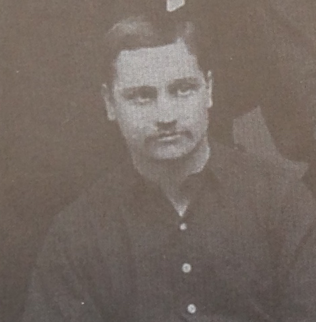 Nicknamed “tap us’ he made his debut in late 1887 and initially rotated between the first team and the reserves.

Became a regular in the first team in the 1891/92 season at half-back alongside Arthur Taylor and Hod Paul, the powerhouse of the side.  James took many knocks as all the half-backs did.

“Wright, too, was plucky in tackling and the careful way in which he fed the forwards was remarked upon.”

At the start of the 1892/93 season James was at the top of his game regularly receiving praise from the local newspapers .  This from October 1892 following a game against West Herts –

“Wright has, during the last two or three weeks, been displaying astonishing improvement.  He was not guilty of any great fault, but he has recently become even more plucky than formerly, and his tackling and heading have been very fine.”

“Has served the full term of apprenticeship in football, having commenced about seven years ago with the Rangers, a club now extinct.  He played for them for about two seasons and then he transferred his affections to the Wanderers, and he remained with them until they, too, went the way of a good many other football clubs and died a natural death.  He joined the Town Club in the second year of its existence and played in the reserves for two years.  Last season he appeared regularly in the Town first eleven, and he has continued to do so up to the present time.  In the Kettering Cup Competition he played at Wolverton last year, and had the misfortune to get severely injured, necessitating his retirement before half-time, and he was subsequently laid up for nearly a fortnight.  The remarkable continuance of wintry weather at that time kept footballers idle for about eight weeks and that enabled Wright to fully recover before again taking the field. Again this season he met with another accident when playing at Luton against West Herts, one of his ribs being rather seriously damaged, but, notwithstanding that, he journeyed to Bristol the following week and took a prominent part in that glorious game at Clifton, when Luton, instead of receiving the “wolloping” which had been predicted for them, succeeded in beating the powerful West of England combination by three goals to nil.  As a half-back, Wright is jot what one would term a brilliant player, but he plays a very persevering game, is thoroughly steady and reliable, and generally manages to render a pretty good account of himself. He does not fluctuate as much as some football players, who perform brilliantly one day and go quite off-colour the next, but is rather to be compared to a certain celebrated tea which is advertised as being “always good alike.”

Whether the knocks were catching up with James we do not know because at the end of 1892 he handed in his resignation.

The committee meeting of the 2nd January 1893 dealt with James departure.

“J. Wright’s resignation be accepted and Hon Sec write to him expressing the regret of the committee at losing him from the team also thanking him for the services he has rendered to the club”.

James was elected to the club committee in the Summer of 1893 and served one year playing his full part acting as referee and linesman on many occasions.