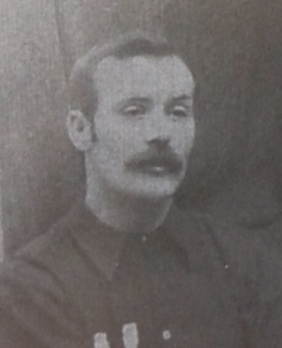 Francis “Frank” Whitby was born in 1867.  His father was also Francis and was a blocker.  The family lived at 38 Cobden Street.  He had an elder brother Edward and younger brother Harry.  Frank and Harry were sent to live with an Uncle and Aunt in Hopton Lancashire, near Burnley where they were both cotton weavers in 1881.

“Gained considerable football experience in the football field, having played for Luton Rovers in 1882 when he made his debut against Christ Church Institute.  He continued with that club until the formation of the Luton club for whom he was chosen to play centre forward.  His first game for the Town was against Grove House, Luton winning 3 – 0.  However, the following week Luton lost 3-0 to Marlow in the first round of the English Cup.

Frank also played for Beds against Hunts and Herts and in 1889 when he was residing in a different part of the globe, played for Padiham against Rossendale, the result being a 3-3 draw.  The following year he took part in the final for the Kettering cup and also in a 6-a-side competition (his side winning the latter at Dallow Lane).

Had a good turn of speed and shooting powers which constantly saw his name on the score sheet.”

The good turn of speed was prevalent in all the Whitby brothers as they won many races in the district as shown below from the Luton Reporter of 25th June 1887.

In 1891 the whole of the Whitby family were engaged in the family hat firm at 83 North Street.  Francis is described in the census as being a Straw Hat manufacturer and six of their ten children assisted.  Frank was a blocker, Harry and Alfred were machinists, Emma and Alice were finishers.  Twelve year old Jesse was an errand boy.  Three other children were still at school.

Frank was asked to play in Luton Town’s first competitive match – away in the F.A. Cup to Great Marlow on the 31st October 1885.  In these early days of football, newspapers reports are sketchy, lacking in lots of the vital details.  However, we are given a good report for the week following the loss at Marlow.  Notts County came to town and drew a crowd of 2,000 to Dallow Lane.  Frank opened his account with a goal – “Another goal was shortly after this got by the home men, partially, however, through a misunderstanding on the other side.  Whitby was following the ball up the middle of the field but several of the Notts men fell back because he was offside.  However, when the ball got in front of the posts the keeper kicked it out, and Whitby stopping it he had then little difficulty in putting it through.  The point was questioned but it was allowed by the umpires.”

I commissioned the painting below featuring Frank against Notts County. 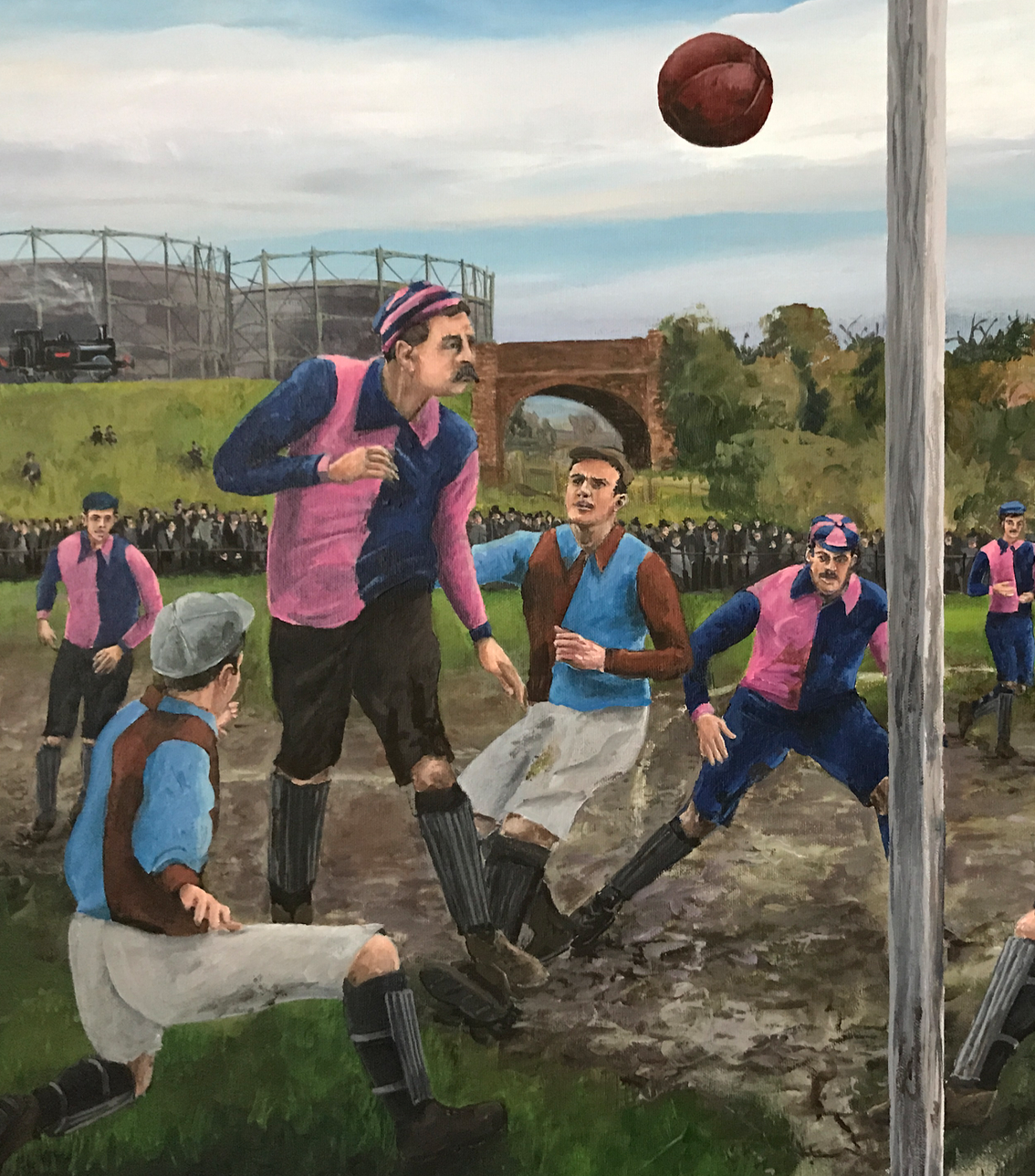 Frank was a goal scorer but the incomplete records only reveal 14 goals up to the end of the 1890/91 season.  However, fuller newspaper reports arrived and reveal he scored 14 goals in the 1891/92 season alone.  Frank was able to score 5 goals in his last season before being dropped to the reserves in December 1892. The club was making tremendous strides as and had risen to the third best team in the South of England. 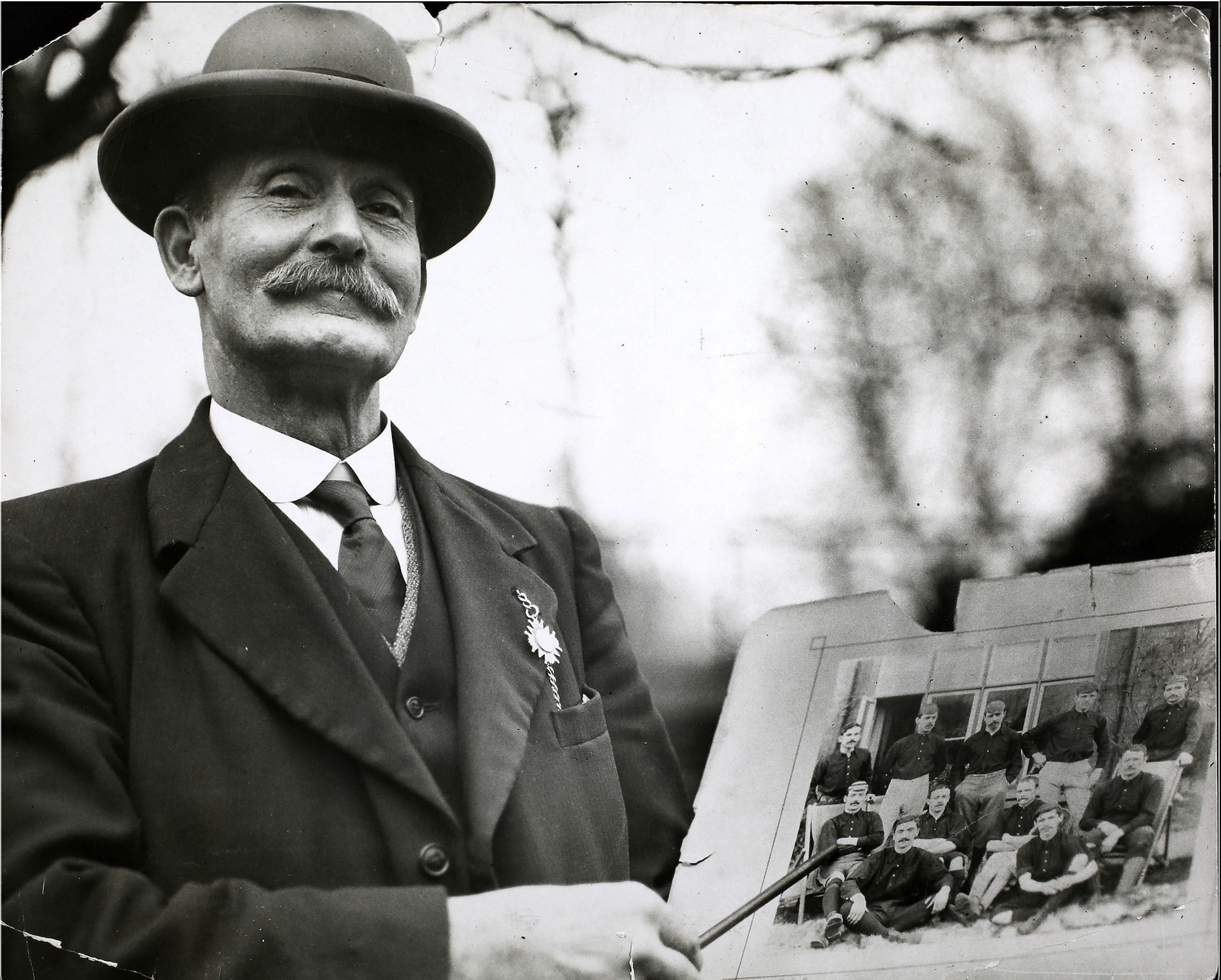 Frank emigrated to Australia but came back for a visit in 1936.  The photo above shows him pointing to himself in the 1889/90 team photo.  As recorded in “The Luton Town story 1885-1985”, Frank visited the offices of the Luton News and talked about being offered to turn professional.  Frank, said he and his brother Harry along with Thomas Read, were offered professional terms of 5 shillings a week.  Frank, in 1936, said he signed at once thus beating his brother and Read to become the first professional footballer in the South of England.  The truth is, however, somewhat different.

The club minute book of the 15th December 1890 confirms that the Whitby brothers and Read were offered 5 shillings a week.  However, the team selection meeting of 12th January 1891 recorded that “Mr Thring be asked to fill the place of F Whitby as forward failing him Mr Dickson.”  Why was Frank not playing while his brother Harry and Read were in the team?  As the weeks, and games passed, Frank continued to be absent from the team.

The minute book entry for the 9th February 1891 reveals all –

“the Hon Sec stated he had received a communication from Mr F Whitby through his brother H. Whitby that he would be willing to play for the Town providing the club paid him 1/- in advance of his brother in order to pay travelling expenses and loss of time.

A lengthy discussion followed on professionalism in general as it affects our club.  When it was clearly shown that if 1 or 2 were paid, the remainder had a perfect right to ask for payment on the same lines.  Most of the committee present were of the opinion that enough money had already been spent on professionalism and if continued it undoubtedly would prove disastrous to the club.

It was therefore proposed, seconded and carried unanimously that the club could not see its way to spending any more money on professionalism as finances stood at present.”

A few weeks later Frank was back playing for the Straw Plaiters without his addition shilling.

I will be kind and say that time had played tricks on Frank’s memory and his 1936 recollections were a genuine mistake.  However, the fact is that his brother Harry Whitby was the first player in the South of England to sign as a professional footballer, Thomas Read was the second and dear old Frank the third.

“Proposed by Mr Hinson, seconded by Mr Austin that 14 days notice be given to Messrs F. Whitby and J. Burley to cease as players for the Town club carried unanimously”.

Frank is described as lacking courage in some reports and he may have been a difficult character at times but his football ability is not in doubt.  He played for the Straw Plaiters for seven and a half seasons, starting off at centre forward but reverting to the wing, often alongside his brother Harry.  Frank scored well over 30 goals but no doubt that total is a lot higher.  Add in the number of assists from the wing and we see that Frank was a vital ingredient in the rise of Luton Town FC.

Frank emigrated to Australia where we lose track of him apart from his 1936 visit.