He lived with his parents and brothers Harry and Frank in North Street, Luton.  Alfred was a Straw Hat machinist in 1891.  He married Alice in 1895 and they first lived at 91 North Street just a few doors up from his parents at 81/83 and brother Harry at 85.

Alfred was an accomplished athlete alongside his brothers.  The first clip below is from 1886 and the other two from 1891. 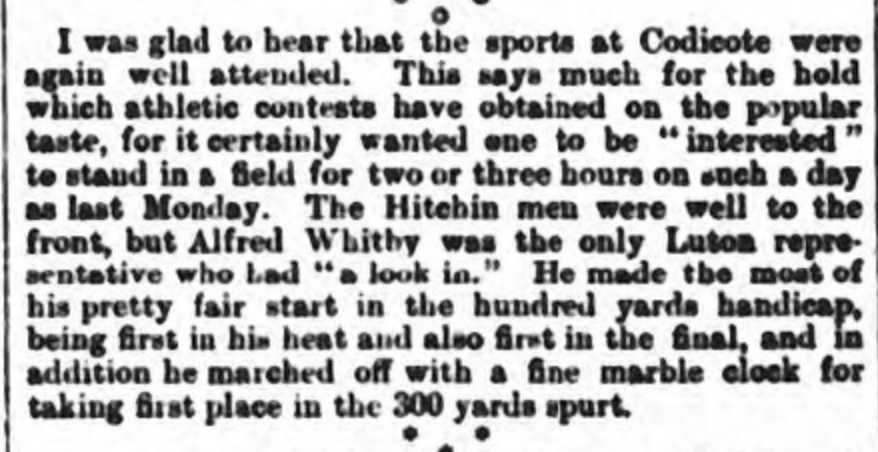 Alfred played his first game at half-back against Luton Montrose on the 25th October 1890.   For a season
and a half he seems to have established himself as the first reserve if there was a vacancy at half-back or forward.

In early 1891, when his brothers Harry and Frank were offered professional terms, i.e. payment, a rumour about Alfred began to circulate in February 1891. The Luton Reporter said – “A rumour has been current to the effect that A. Whitby had declined to play because he is not paid, and we are requested to state that the story is without foundation.”

On 10th August 1891, the club committee decided to extend the payments to all the players.  Frank, Harry and Alfred were offered 2/6 a week.  This was unanimously accepted by all the players.  But by the 24th August the committee revealed – “All forms were brought in signed with the exception of Mr A. Whitby’s he having obtained work out of the town.  This leaving a vacancy in our forwards.  It was left in Hon Sec’s hand to see Mr Oclee with a view to filling his place”.

Alfred did play again for the Straw Plaiters.  He played an “indifferent game” against West Herts in January 1892 missing an open goal in the 2 2 draw.  He did manage to score in his last ever game, a 3 2 victory against Edmonton on the 27th February 1892.

Records are incomplete but Alfred played in at least 13 games scoring three goals.

The only known photo of Alfred from 1898 and is kindly provided by Cheryl Smart. 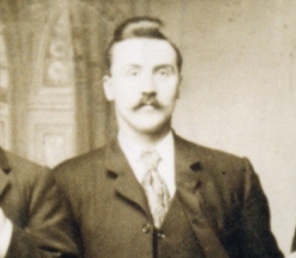 By 1911 Alfred was an engineers fitter and lived at 96 Old Bedford Road with this wife Alice, daughter Frances and they had three boarders staying with them so it look like they ran a B&B.