Born on 6th May 1868 at Hardingstone, Northamptonshire.  In the Michaelmas term 1878, Sidney attended St. George’s School, Brampton, Huntingdonshire (which later moved to Harpenden). Quotes are from the St. George’s School newsletter.

The School Magazine says that in 1883 Sidney played in a Past versus Present football game.  Sidney plays for “Present.”  In 1885, he is described as being a new master, but this may have been on an informal basis.  He was captain of the cricket team and the football team.  His football profile in the School magazine is as follows –

“Brilliant at all points of the game, dodgy dribbler, “shoots” with judgment, to his captaincy is due in great measure the success of the Eleven.”

Sidney was elected to the Games Committee and also played tennis.  He was given a half-day holiday in honour of passing 2 examinations at Dublin, Trinity College.

1886 saw him again on the Games Committee playing football, cricket and was time keeper for the Athletics.  He was included in the Cambridgeshire county team but also turned out for Hertfordshire.  On 14th December 1887  Sidney and S.F.P. Moore both play for Hertfordshire against  Huntingdonshire at St. Albans.

In 1888 the School had changed it’s uniform to

In the team profile Sidney is described as;

“an excellent forward on the left; very fast, and very neat with the ball; shoots hard and well.”

Sidney was given his Cambridge County Football Colours and kept busy with all manner of school duties.  He was on the Games and Tuck shop committees, gave a subscription for the new Chapel at the school.  At this time he definitely was teaching at the school and

joined in the entertainment evenings and played “fives.”  He played for Watford Rovers.

His 1889 football profile describes him as a

“Good and energetic forward on the right; dribbles cleverly and with great judgment; excellent shot.”

Played for Cambridgeshire against Northamptonshire.

1890.  Sidney played forward for Wisbech against Cambridge Rovers in the final of the Cambridgeshire Cup.  He took his B.A. Degree at Trinity College, Dublin and was involved in concerts and theatricals at the school.

Luton Town at last noticed the wealth of talent on their doorstep in Harpenden and invited four Masters to play (Stanley, Moore Bennett and Gill).  On the 11th October 1890, Sidney made his Luton Town debut in a home defeat to Great Marlow.  A fortnight later he scored in a 4 1 win over Tottenham Hotspur.

Professionalism had arrived at Luton so the Harpenden Masters, who were also somewhat unreliable, were dropped from the team in favour of local men.  Sidney made his last appearance for Luton Town on the 28th February 1891 when he scored in a 4 1 home defeat to Bedford.

He went on to play for St. Albans and played for Cambridgeshire v Surrey.  School life continued in the same vein as before playing football, cricket, fives and quoits and joining in the entertainment evenings.

Sidney left St. George’s School in 1894 the school magazine stating that they were –

“losing a very old stager this term and 16 years man and boy.”

He passed his B.A. degree at Dublin and on the 22nd December 1895 he was ordained Deacon at Chelmsford – to be curate at Ware.  He returned to St. George’s School as part of the Reverend C.W. Bennett’s visiting football team.

By 1896 he is known as Reverend S.M. Stanley B.A. and he subscribes to the Schools’ “Old Georgian’ magazine for old boys’.    He played cricket in the “past” team and on the 20th December was ordained Priest at St. Albans.

By 1897 Sidney has moved to Ware, Hertfordshire.  He again returns to his old school with a team to play football from “Young Men’s Friendly Society, Ware.”  At the School’s Queens Jubilee concert he sings solo, in a duet and performs in the theatrics.  He brought his team again to play St. George’s School again in 1898.  He performs in a concert and theatricals again.  Is now described as a priest at St. Mary’s, Ware.

He married Mildred Florence Kirkby in 1903

Sidney died on 5th May 1943 in Colchester Hospital.  He resided at the time with his wife at the Rectory, Stapleford Tawney, Essex. 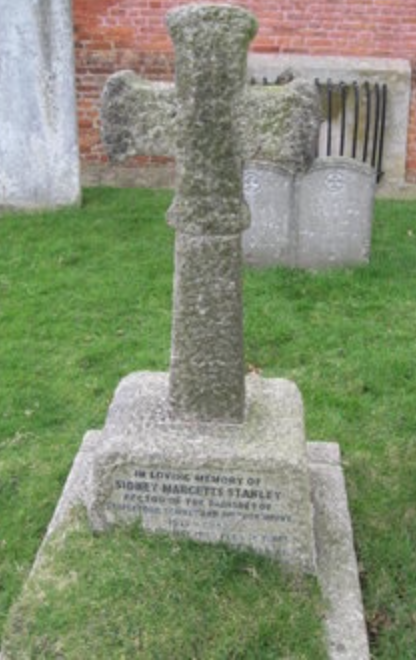 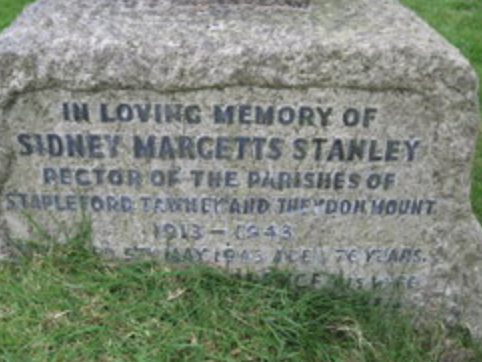