Gilbert Howard Small was born in Clare, Suffolk in 1864.  In 1881 he was a Straw Hat Warehouseman and lived with his widowed mother at 50 Dunstable Road.  He was also a gifted cricketer and played for Luton Town Cricket Club.  His older brother Oliver F. Howard was also a warehouseman.  His mother received a pension and they were well off enough to have a servant. He was known by the nickname “Tom” so some reports show him as “T. Small.”  He even signed a letter to the Luton News in 1906 “Tom Small.”

He played in the first reported Association Football match in Luton, captaining Rovers against Excelsior on the 23rd October 1880.  He played for “Luton” in a representative team as part of a trial for the East Midlands counties F.A. in February 1885.

Gilbert will go down in history when he proposed “That this meeting establish a “Luton Town Football Club” on the 11th April 1885.  Gilbert was elected onto the committee for the first season but not returning until he was elected in 1890.  He played in the very first Luton game, a 3 0 home win against Higham Ferrers.  Gilbert would play many Luton games in the first four seasons as a forward scoring at least 3 goals.  The details are lost due to the lack of reports in those early years.  He was elected onto the committee in 1890 and played a full part including acting as Umpire in first team games.

Gilbert was one of those remarkable multi talented Victorian athletes who excelled at cricket perhaps more than football.  We first come across Gilbert batting for Norton House School in 1879 scoring 64 in an inning defeat of the Old Boys on People’s Park.  Norton House School had boarders as well as day pupils.  The headmaster, J. Thurnham was a fine cricketer who would play for Bedfordshire.

Gilbert played for Luton Town Cricket Club and finished top of the batting averages many times, for instance in 1887 he ranked first with an average of 33.

The 1889 Luton Cricket Club AGM shows the problem researchers can face where Gilbert is first called G.H. and later “T” Small in the same report –

“The annual general meeting of the above club was held at the Town Hall on Wednesday evening, the attendance of members being very meagre.  Mr J. Smith was asked to preside.  The report for the past year was submitted by the Secretary (Mr T. Wheeler) showing that 30 matches were played during the season, of which 15 were won, 11 lost and 4 drawn.  The best batting average belonged to Mr G.H. Small, and the best bowling analysis was that achieved by Mr H. Wilkinson.  The Treasurer (Mr W. Kershaw) presented the balance sheet.  The receipts included £21 for gate money (against £43 in the previous year), and £66 for subscriptions, and with £12 15s 5d brought forward from the preceding year amounted altogether to £149 3s 11d.  The expenditure on being placed against this left a cash balance of £1 5s 11d.  There were, however, liabilities of nearly £30, so that the treasurer estimated there would be a deficit of over £26.  In the liabilities there was the rent of the ground.  That was £30, but Mr Cumberland had agreed to deduct £5 in consequence of the meadow having been interfered with for building purposes.  Some of the members thought this was not enough, and that Mr Cumberland ought to make a greater reduction because he had broken into the meadow in the middle of the season.  Mr Wheeler remarked that there had been a great decrease in match expenses.  There had been seven more matches while there was about £50 less expense.  The report and balance sheet had been approved of, the meeting proceeded to the election of officers for the ensuing year.  The following were appointed: President, the Mayor; Treasurer, Mr R. Dearberg; Joint Secretaries, Messrs E. Gilder and H. Kemp; Committee: Messrs S. Pakes, W. Kershaw, T. Wheeler, Randall, W. Higgins, J. Long, T. Small, and F.W. Ewen; Auditors Messrs Deacon and Timms.  Mr J. Hill was added to the list of vice presidents”.

Gilbert became the Secretary of the Cricket club at a very turbulent time.  This from the 1892 AGM – The Luton Town Cricket Club had their Annual General Meeting chaired by our old friend, John Cotchin.  The secretary, the former Luton Town football player Gilbert Small, reported a huge deficit in the clubs accounts in the sum of £42 15s 6d.  Money spent on “professional aid” which I take to mean professional players had cost the club about £40.  Rent to the Central committee was an additional £20.  It was agreed that a town the size of Luton should be able to support the town’s cricket club.

“MR. G. H. SMALL was on Saturday night presented with a prize as the player who had secured the best batting average for the season in connection with the Holborn Cricket Club.”

So it seems the Luton Cricket Club had folded. 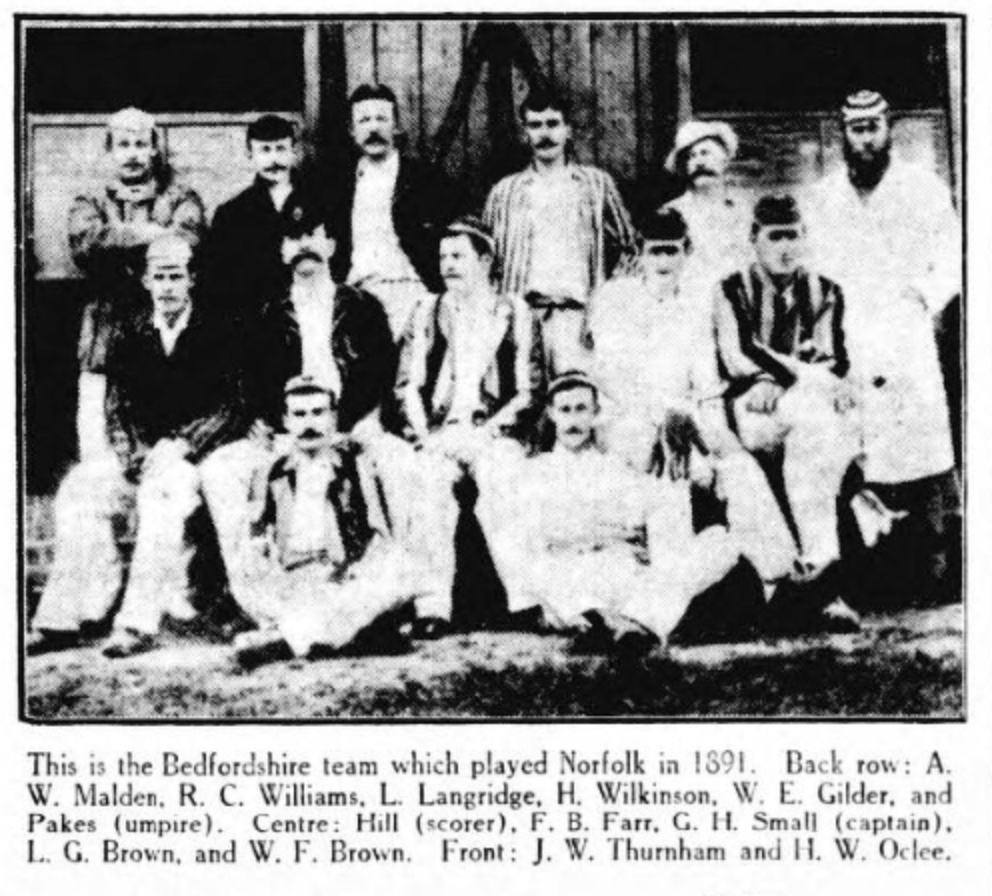 On the domestic front in 1891 Gilbert lived at 12 Victoria Villas, Dunstable Road with his Mother and elder brother Oliver who was a Straw Hat Manufacturer.  Gilbert was a manager of a Straw Hat factory.

Gilbert married Amy Ellen Hurrell on the 25th September 1892.  The Reverend O’Neil conducted the ceremony at the Parish Church.  By 1901 they had 5 children and were living at 31 Brook Street.  He was now a Straw Hat manufacturer.

Sadly Amy died on the 16th April 1906 aged just 40 while she was living at St. Heliers, The Downs.  Things took another bad turn for Gilbert when he was made bankrupt in October 1909 while working as a Commission agent and living at 55 Dale Road.

The Mayor of Luton, speaking at the 1922 Cricket Club AGM mentioned Gilbert’s passing and said – “nearly 30 years ago he was associated in the same business house with the late Mr G.H. Small whom he always found a good comrade and a good sport.”

Gilbert was not forgotten years later when Herbert Oclee, a fellow LTFC and Beds CC player, spoke in September 1937, clip below. 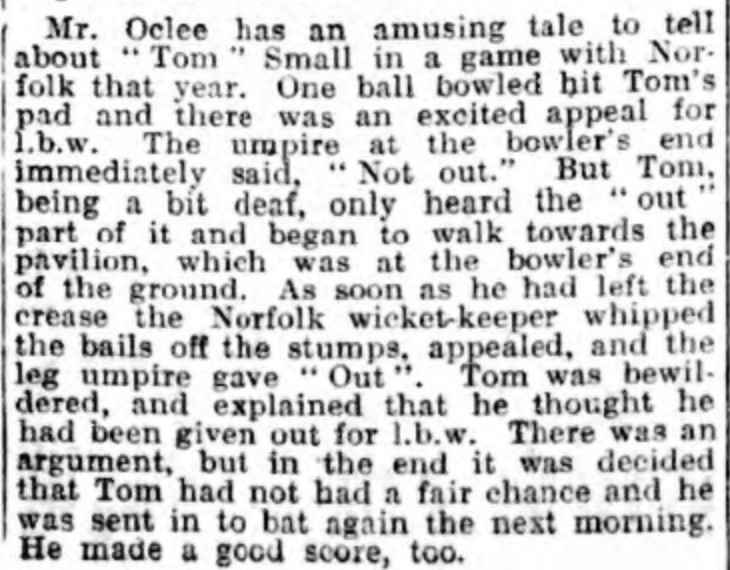