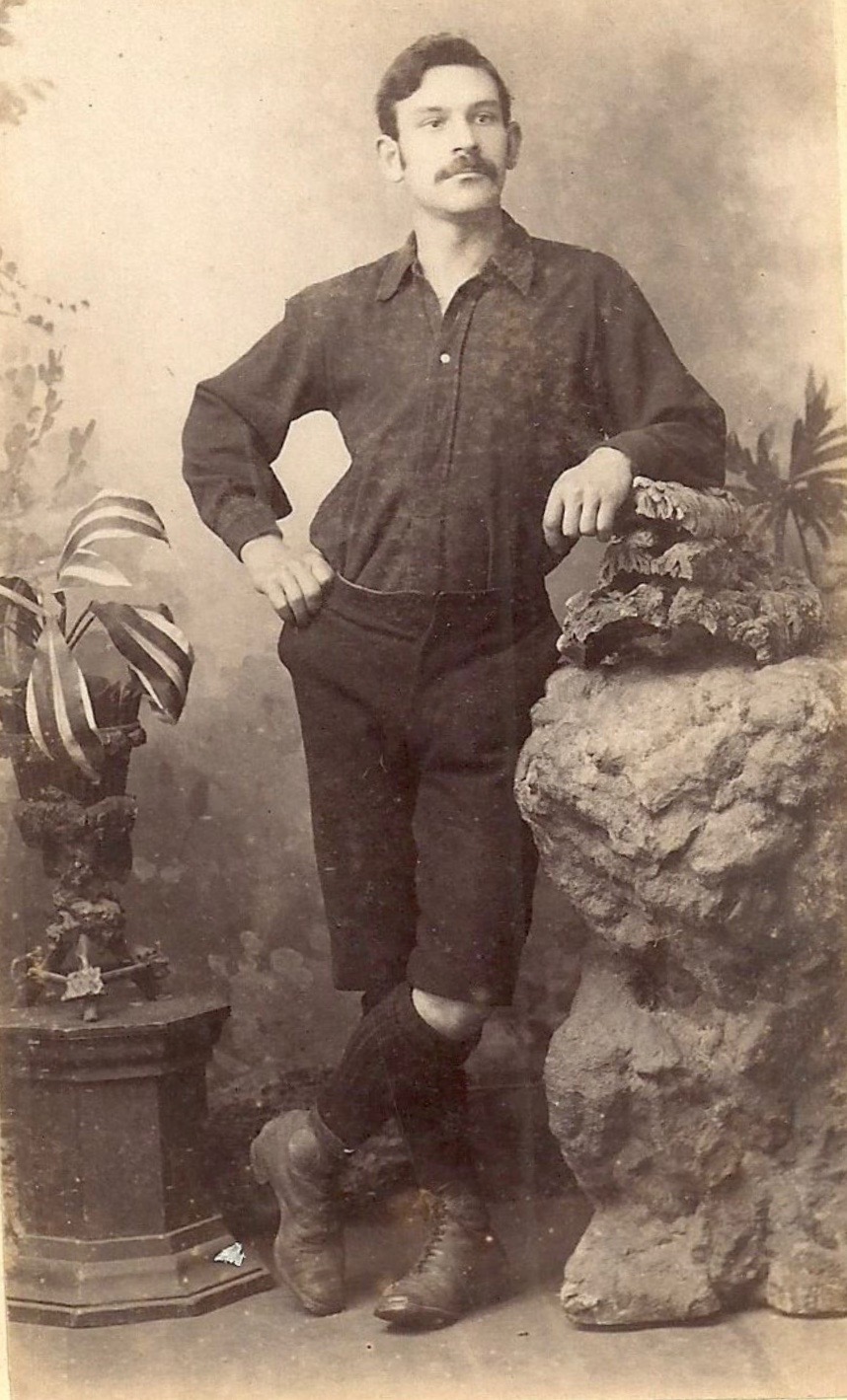 Born on the 19th November 1869 in Dunstable to Frederick and Jane Sanders.  At the time of the 1871 census they lived at 4 Ashridge Villa in Dunstable.  Frederick was a Straw Hat Warehouseman and they were quite wealthy as they could afford a servant.   By 1881 Bert was living with his parents at 53 Rothesay Road.

The following clip from the Luton News from 1892 gives some interesting details about Bert;

“Began playing football as a boy at Mr Newman’s school in Wellington Street; with the Moor as their scene of operations, he and some fellow pupils once banned a schoolmate from playing because of the boys’ large size.  That boy (whose identity cannot, unfortunately, be unearthed) was one of the executive committee when “Bert” joined the Town.

Prior to that he had, with a few others founded the Albany Club, with its home pitch at Mr Scarborough’s meadow in Dallow Lane.

For three years he remained with that club before being selected to play for Luton Town against Hitchin.  His excellent performance on that occasion gave rise to his being selected regularly for the Town, a task which he undertook with the utmost fervour.  Bert was well known for his sure tackling and generally proficient performances, a fact which did much to spread the confidence among the remainder of the team.

Among his other claims to fame were his musical talents, something which brought him often to the public eye.”

This clip gives us some useful information about the Albany club which came from nowhere to become one of the leading clubs in the town by 1885.  The clip also confirms my thoughts that the Albany club was made up of enthusiastic young men who really influenced football in the town.  Men such as Bert Sanders and Walter Miller (see the latters Hall of Fame entry) impressed in the Albany team and were soon given their debuts in Luton Town reserves.  They were among the first of the young players given an opportunity just as J.C. Lomax had promised on the 11th April 1885.  Bert was a reliable back with a good kick but also liked to get forward making “dodging runs” and possessing a fine shot.

“Sanders is an old hand, this being his fifth season in the team.  He is not by any means old as far as age is concerned, for he commenced playing when he was only 16 years of age.  He is not a big man, but is very plucky and kicks well.”

His form dipped in the the last part of the 1891/92 season and he was dropped from the first team.  He fought back and regained his place in the team the following season.  Bert played last game for Luton Town on Easter Monday 1893 when he made a rare error to let Derby County in for their first goal in a 3 2 defeat.  Bert joined Luton Montrose having received the necessary permission to return to amateur status.  It may be that he was uneasy about professional status or his business might have got in the way.

“By the way, Bert is just starting in business, having taken premises in Manchester-street.  He has my heartiest wishes for success, for no-one more deserves it, and the long and practical experience he has had should stand him in good stead.” 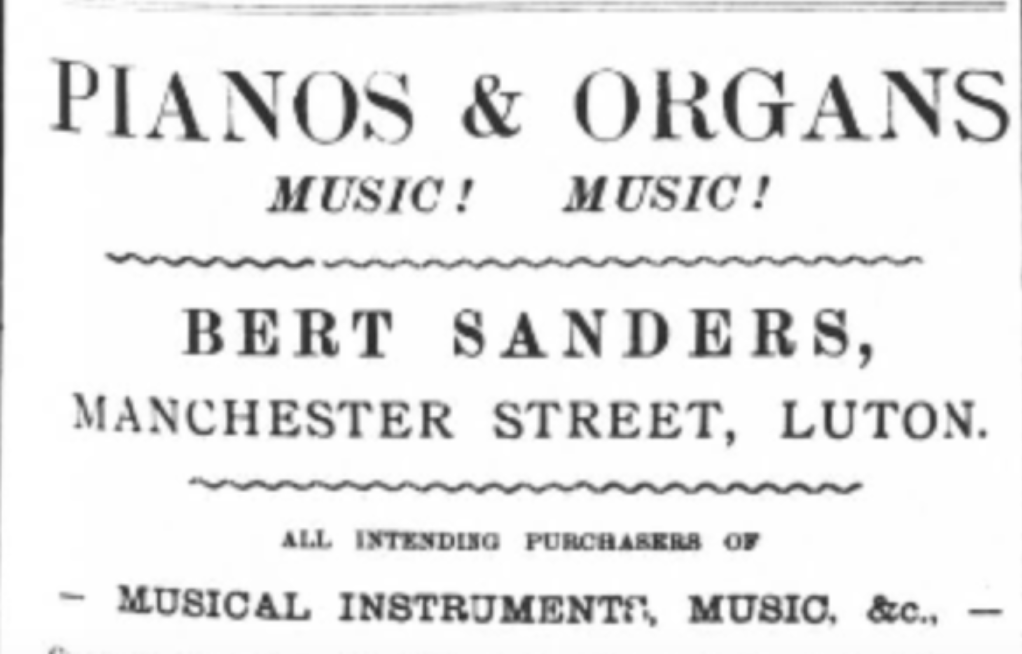 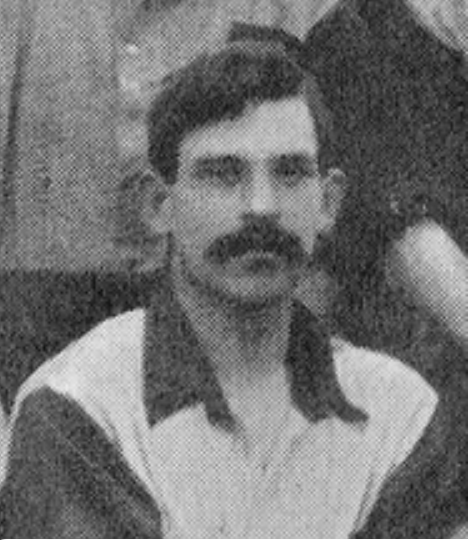 Bert was tempted to join other ex Luton players in the St. Albans team  – the photo above right was taken for the 1895/96 season and he wears their pink and black shirt.

The above clip is from a Hertfordshire Newspaper shortly after his debut for St. Albans.

He married Elizabeth Batchelor in Castleford, Yorkshire on the 9th August 1899.  The 1901 census has Bert and his wife and child Elsie living at her parents in Castleford, Yorkshire.  Bert was working as a piano tuner.  This must have been temporary as Bert was involved in many concerts in Luton and the district at this time.  Entertainers of all kinds were in high demand and Bert was either invited or hired to perform at many events.  The clip below left from the Luton Times of the 9th March 1900 shows that he soon developed a reputation which would help him obtain more bookings.  The Luton Times of the 23rd February 1912, below right reports on an organ recital at the King Street Congregational Church.  Bert was also an accomplished singer. 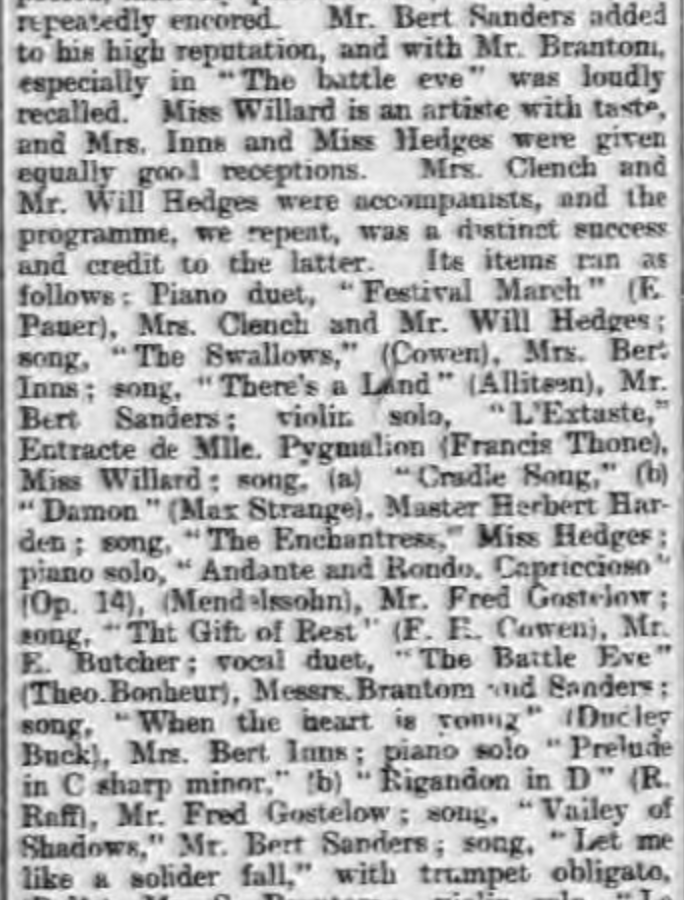 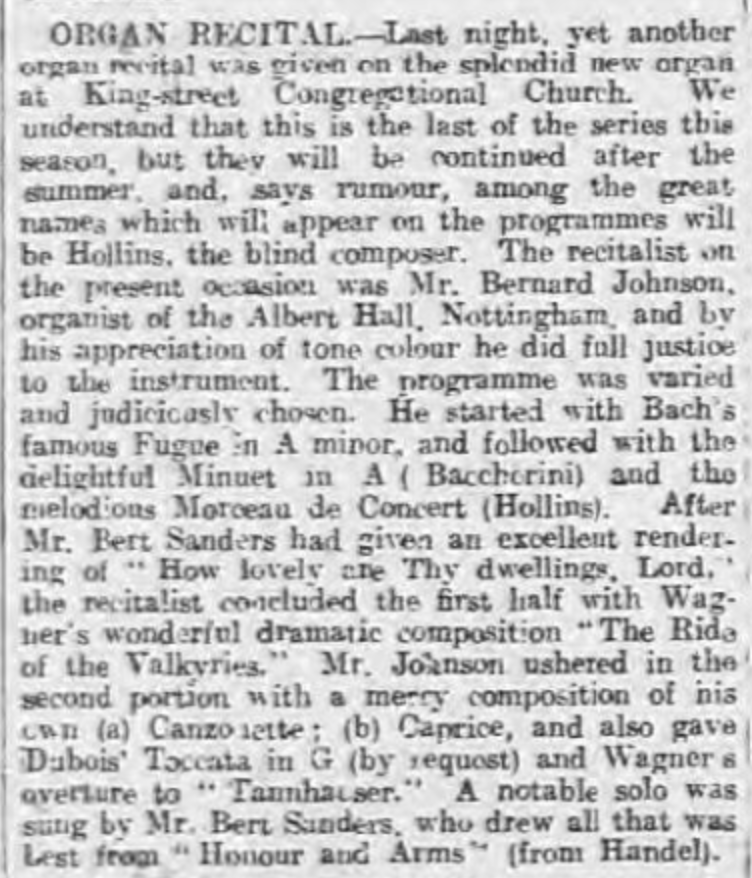 The 1911 Census has Bert living in Rushden with his wife Elizabeth, daughter Elsie and son Reginald.  Bert was a Pianoforte Warehouse Manager and they could afford a servant.