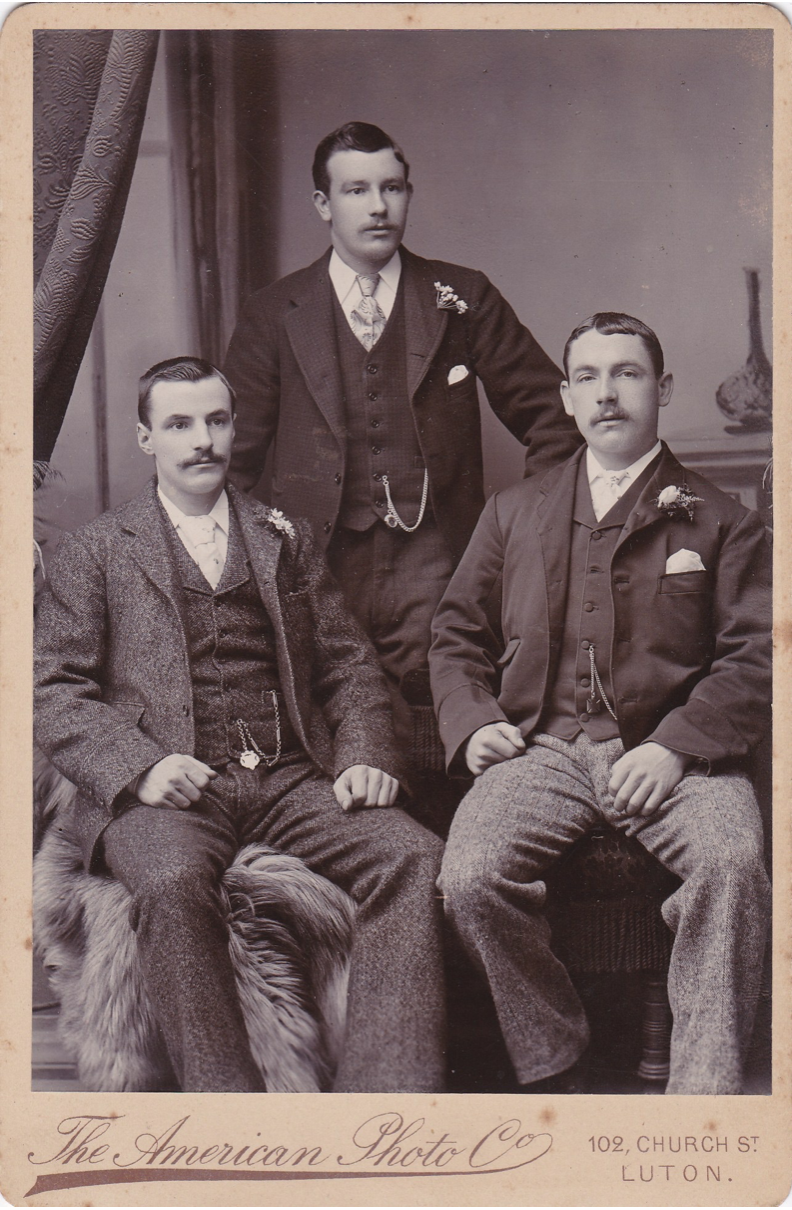 John was born in Glasgow in 1871.  Played for Middlesbrough and Bootle (with Punch McEwen).

Minute book entry for 14th August 1893 which says  – “That we offer 30/- per week and travelling expenses from Nailston to Luton to be made to J. Finlayson”.

The photo, left, shows William Gallacher sitting on the left in his best suit.  The other sitting man is John McEwen the Luton Town back and standing is John Finlayson the forward – also in their best suits.  The button holes indicate a wedding – John Finlayson married Sarah Louisa Daniels on the 13th April 1896 in Luton.  We cannot be certain but if you were composing a photo of this type then the groom would be centre between his two best friends.  The men are very well groomed and in their best suits.  A strong possibility therefore that we can identify the date that this photo was taken, 13th April 1896.

The quality of the photo is superb (apart from a couple of blemishes) and you can zoom in to see their watch fobs – all three are different. 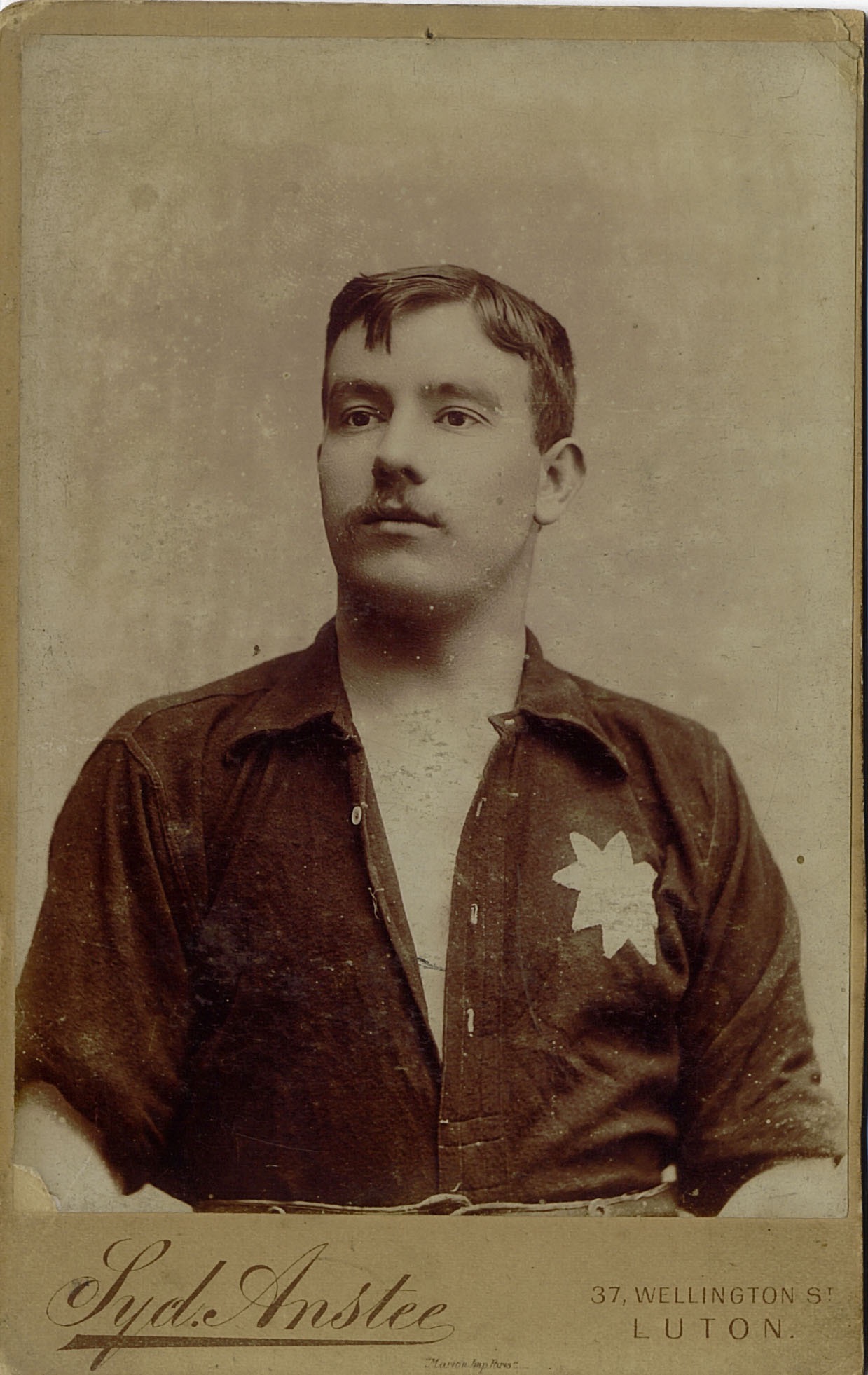 Committee 2nd September 1895 – “The conduct of McCartney then came before the meeting rumours abounding that he was the worse for drink on Saturday night.  It was stated by Mr Barford that last year we resolved to take no notice whatsoever of rumour or anything that came second handed and he thought this season we ought to act the same and bring nothing before the committee unless actually seen officially.  Mr Squires mentioned that he had seen it himself.  It was therefore resolved that Messrs McCartney and Finlayson should attend before the Emergency committee on Tuesday September 8th.”

Committee 3rd September 1895 – After McCartney admitted his fault – “Finlayson then came before the committee when the Secretary spoke to him about his condition on the same date stating that we could possibly do with it and asking if he could suggest a remedy.  The answer came quickly ‘Stop it’  Very good said the Secretary just apply it to your own case.  In the end Finlayson promised to try his best to keep from it.”

Finny moved on to Bristol St. George and then for Cowes on the Isle of Wight where he settled down.  He played for Cowes and had further children Cyril, Margaret, Donald, Maurice, Colin and Louisa.  James was born in early 1919 but died in July later that year.

Finny was a driller in 1919 living at 3 China Terrace, Cross Street, Cowes on the Isle of Wight. 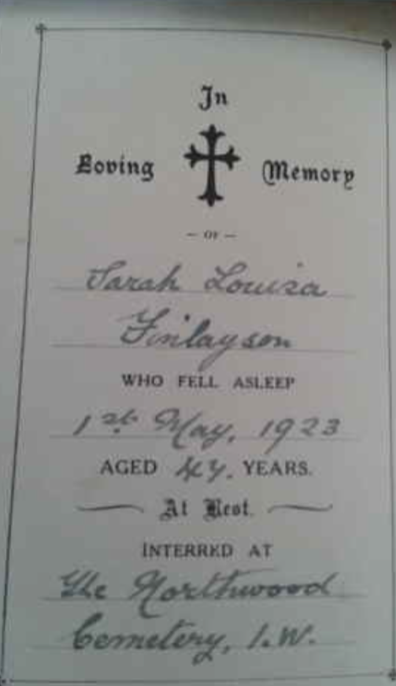 John passed away on the 4th March 1928 aged 57.  He is buried in Northwood Cemetery, Isle of Wight. 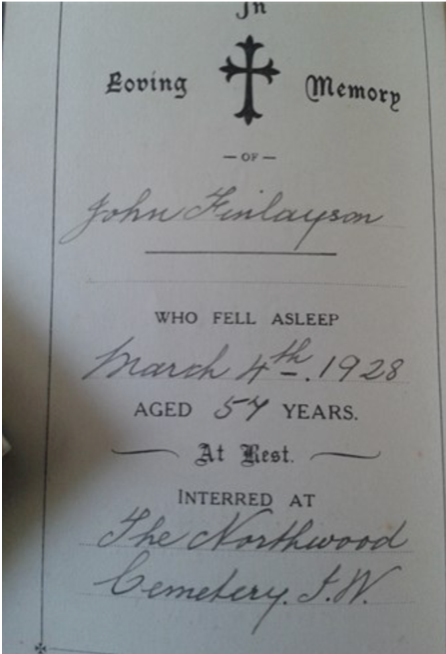 Colin Gudgin, custodian of the Prime family album for the photos.