John Butler Furlong (son of George Furlong, committee member in 1885) was born in Luton on the 2nd June 1868.  He was baptised in Cosheston, Pembrokeshire on 20th October 1872.  In 1877 he was at boarding school in Upton, Slough.

J.B played football for St. John’s College, Luton Albany, Luton Wanderers and Luton Town.  He was secretary of Luton Albany for the 1886/87 season.  He appears to have played for Luton Town reserves for some time and made his debut in the first team in February 1888 when he scored the second goal in a three one win over Bedford.  At the 1888 Annual General Meeting he was elected onto the committee of Luton Town F.C.  We catch him appearing in a few matches but John Butler and his father George Furlong disappear from view in Luton in 1889.

In April 1890 J.B. gained employment at the Midland Locomotive, carriage and wagon department in Derby.  He left in May 1890 with notice, the record book adding “Irregular Conduct.”

Andy Furlong kindly provided me with the following –

“John Butler Furlong held a record for ‘high diving’ and went by the pseudonym ‘Professor Vivian’. It is not clear why he adopted that name.  There were reports in various papers at the time. He was a keen swimmer, so he was definitely a sporty guy. My aunt said he used to jump off bridges into water with a lit cigarette in his mouth and resurface with it still lit. I think he was quite the character.”

Thursday July 30 1891 – Birmingham Daily Post -“…made by a man to beat Burns’s record for diving from the bridge. The man was Professor Vivian, otherwise known as John B. Furlong. He hails from Luton and has…”

A John Butler Furlong appeared at Hanley Quarter sessions of the peace on 21st April 1892 charged with “obtaining goods with false pretences” for which he was bound over.  The person used a number of aliases so whether it really was J.B. Furlong we do not know for sure.  Two of his known aliases were Francis Charles Vivian and George Vincent.

The above clip is from the Evening Express 22nd October 1893. 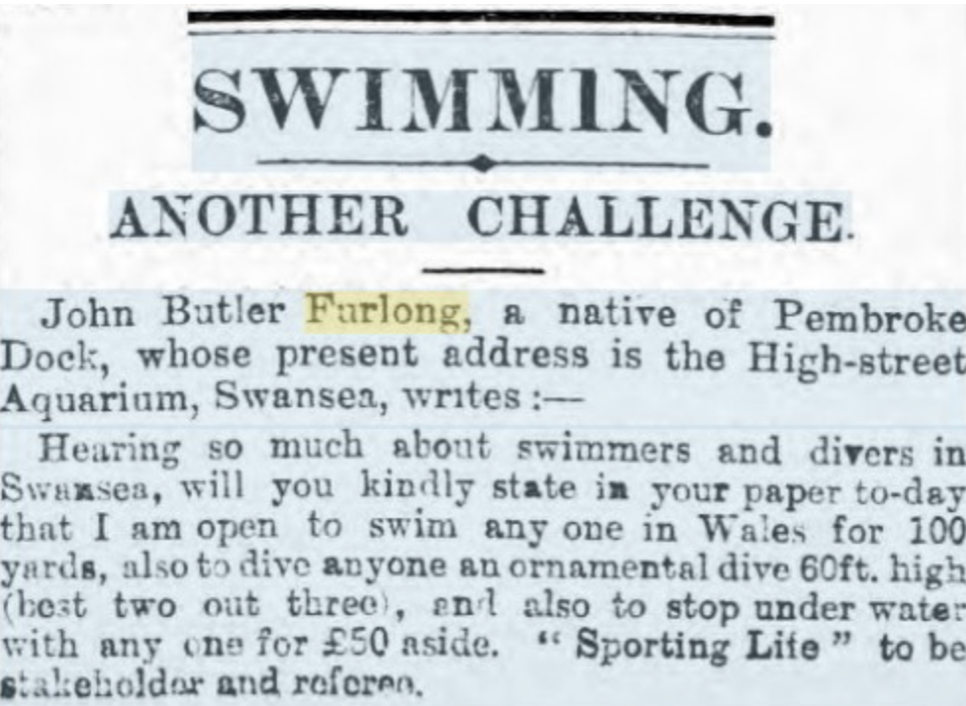 The above clip is from the South Wales Daily Post 1893

J.B. married Kate in 1892 and they moved to Bristol where he became a schoolmaster, following in his father’s footsteps.