“Luton’s new centre forward has already established himself in the favour of local footballers, although he has only taken part in two matches under Luton colours.  Galbraith, who is a splendidly built fellow, first opened his eyes to the light of this world on the 2nd December 1868, in Govan near Glasgow, and is therefore twenty-four years of age.  He began playing football when he had reached the mature age of twelve, and so well did he like the game and so good were his performances, that his subsequent progress was very rapid.  He joined the East End and afterwards Our Boys of Dundee, playing right half-back for the latter.  Later on he took part in several important matches, playing against Kilmarnock, and for Forfarshire against Ayrshire.  Galbraith came to England a few years ago, his first engagement being with Bootle.  He was two seasons and a half at that place, and during that time he played against Dunbartonshire for Liverpool and District, and against Renfrewshire and Birmingham and District.  His position on the field was then on the inside right.  He afterwards yielded to the blandishments of the committee of Middlesbrough Ironopolis and played for them for a season and a half.  The first year he was with them the “Nops” won the Northern League Championship, and Galbraith took part against such clubs as Sunderland Albion, Stockton, Sheffield United, etc.  In November of last year our worthy Scot appeared as centre forward in the Barnsley team, a position which he occupied till the end of the season.  His first match in his new capacity was against the Blackburn Rovers, who were beaten by three to nil, and he afterwards played against most of the League teams.  At the beginning of this season Galbraith played for Burnley against Aston Villa, Sheffield Wednesday, and Sheffield United, and then a bit of unpleasantness with the committee of management caused him to sever his connection with Burnley.  The fact of it was, the committee wanted him to make way for a new importation, and Galbraith rather than go in the Reserves, accepted Luton’s offer and came south.  The Lutonians, however, only just managed to secure him, as within a very short time of his capture he received another and a better offer from the neighbourhood of Liverpool.  It was very unfortunate for Luton that he had to be left out of the cup-tie on Saturday as his presence in the team would undoubtedly have been the means of turning the scale in favour of the Lutonians” [this refers to him being cup-tied against Polytechnic, who won 4-2].

Hugh Galbraith was offered 30/- a week by the club to entice him South. (he was the first player the club offered close season wages of £1 per week in order to retain his services).    He and J.W. Julian were the first professional imports to the Straw Plaiters.  Both coached the players who, in 1892, were mainly Lutonians.  Hugh was closely marked right from the start.  In his first game three Millwall players went to him every time he received the ball.

“When he got within 25 yards of goal the crowd with one voice would shout “Shoot Gally”.  And he could shoot, too, and was not afraid to do so.”  Bennett continued to say that while only of medium build “but with great speed, he could dance by the best of halves and leave them standing.”  He adds that “Galbraith had a peculiar way of running with his elbows stuck out, which made it very awkward for his opponents to charge him off the ball.”

In his first season, 1892/93, he scored 30 goals in 23 games including two against Derby County.  The following season the club played against higher ranking opposition and Hugh continued to receive very close attention and sustained many injuries.  However, it has to be said that he dished out rough play and received it in return.  He still managed to score 28 goals in 37 games in 1893/94 and helped the club win the Luton Charity Cup.

After the last game of the 1892/93 season, the club held a tea and smoking concert for the players, opposition,committee and well chosen guests.  When it was time for entertainment Hugh took his turn and “rendered a jodelling (sic) song in first-rate style, and was compelled to substitute another piece in deference to to the enthusiastic applause of the audience.”  He also acted as referee on occasions in friendlies and appears to have helped J.W. Julian coaching the players and did this unpaid.  On the 8th October 1894 the committee voted him a pay increase to £2 per week.

On entering the Southern League in 1894, Hugh Galbraith ended all doubts about his title as the best centre forward in the South.  He scored 12 goals in 14 League appearances and 4 goals in 5 F.A. Cup appearances.  The following season he scored 16 goals in 15 League appearances and the clubs only goal in the shock F.A. Cup defeat to Tottenham Hotspur.  He won three Luton Charity Cup winners medals in 1894, 1896 and 1897 and one Kettering Charity Cup winners medal in 1897.

Having left the Southern League, the 1896/97 season saw the Straw Plaiters play only in the United League where Hugh scored 6 goals in 10 matches.  They did of course, also play friendlies, and F.A. Cup and the Luton and Kettering Charity Cup ties.  Hugh scored a total of 28 goals in 41 games.  Most of his goals (including three hat-tricks) were scored in the first half of the season when he played at centre forward.  The club had a magnificent forward line at this time and he was moved to the wing for the majority of the second half of the season.  The club won the Luton and Kettering Charity Cups and just missed out on a treble by finishing second in the United League. 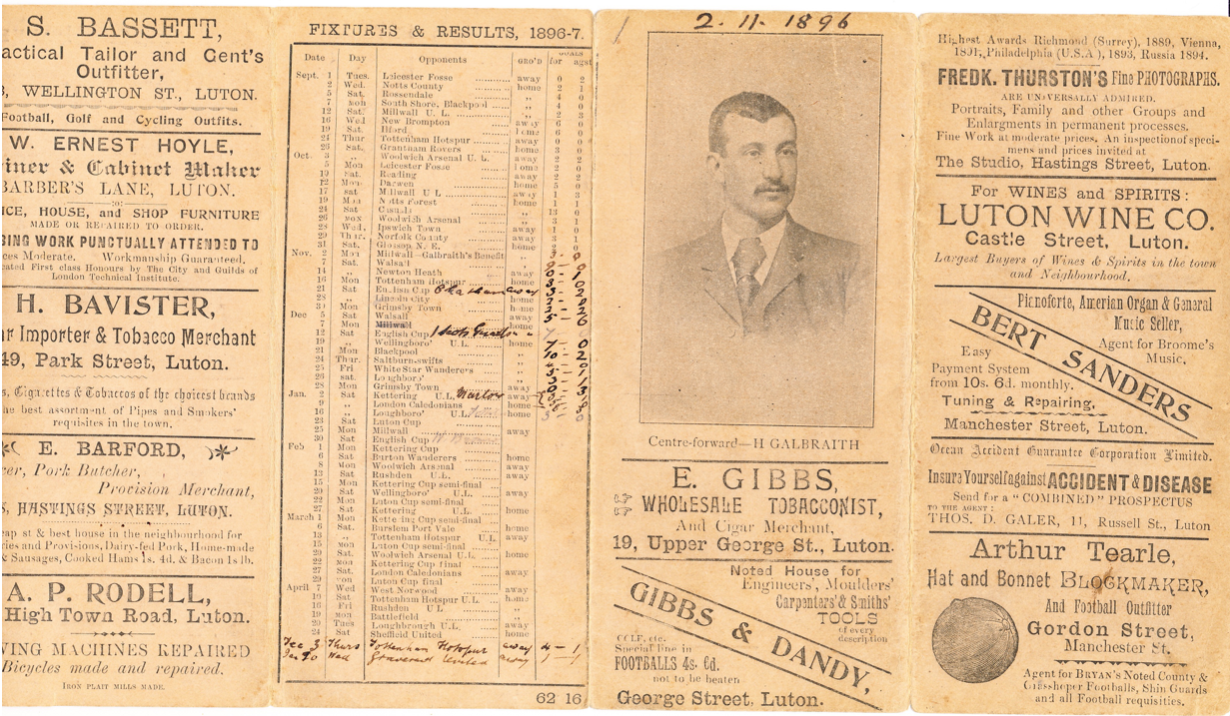 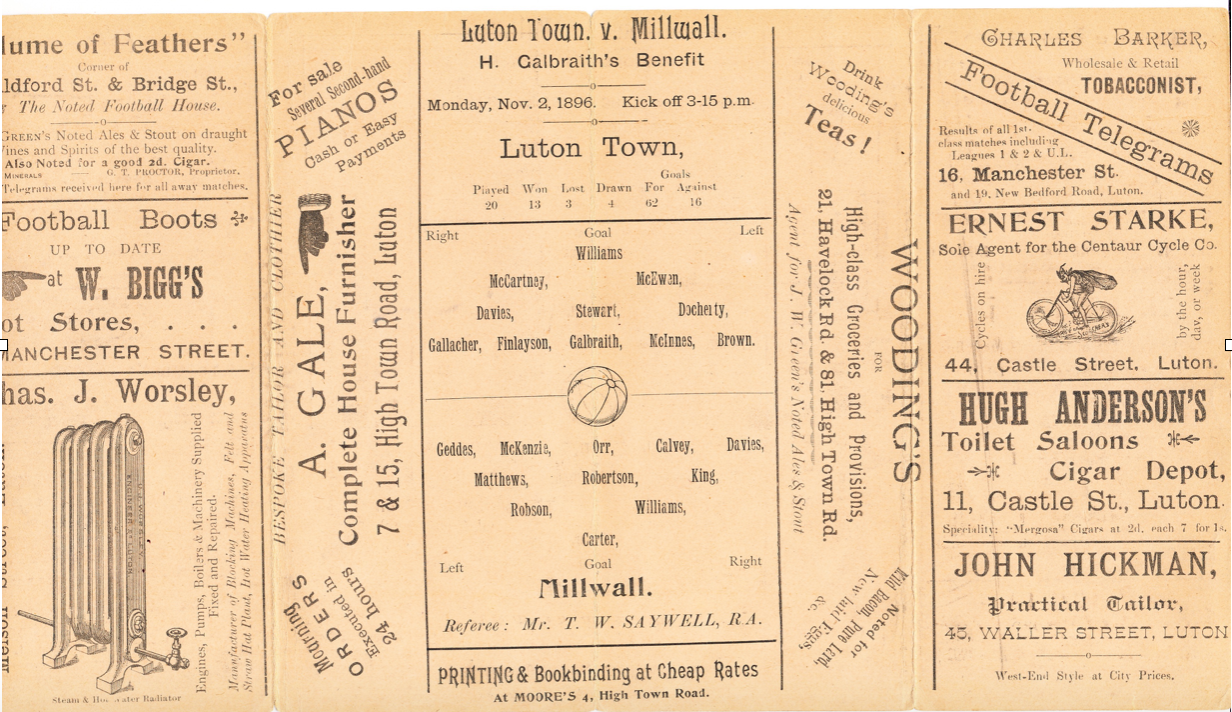 Hugh had his benefit match against Millwall in the 1896/97 season when he scored twice in a three nil win.  Note the advert by Bert Sanders, the ex Luton player on the match card and that the Plume of Feathers was “the Noted Football House.” 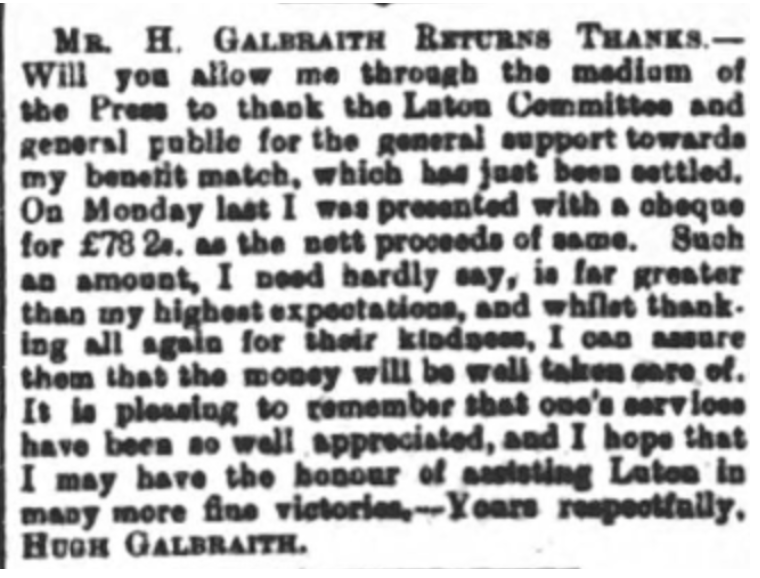 Hugh’s thank you letter to the people of Luton appeared in the Luton Times of the 18th December 1896 (left). 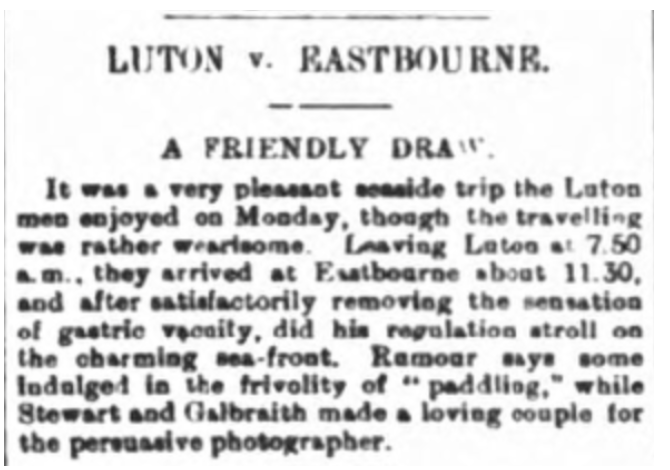 It was not all hard graft, injuries and mud as shown by the clip, left, from the Luton Times of 26th February 1897.

At the end of the season Hugh was hospitalised with rheumatism.  It is interesting to note that the Club minute book in 1893 records that Hugh had asked the club about the “medical clause” in his contract.  We are not told exactly what this was about but the club refused to alter the clause.  He was confined to the Bute Hospital for many months.  At the end of October 1897 he came back from a week at the salt baths at Droitwich.  The Luton Times correspondent called on him and said he looked very ill but Hugh reported that the rheumatism had gone but his legs were as weak as matches.  He could not wait to play “futba” again. 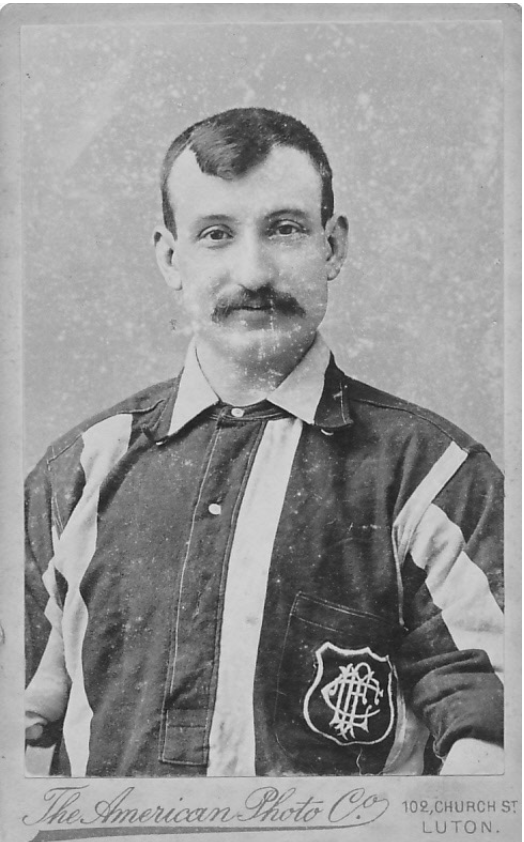 Hugh missed the whole of the 1897/98 season.  He made his comeback in a friendly on the 26th September 1898 at home to Gravesend.  He did not score as he was still rusty after his lengthy “holiday.”  The Luton Times noted that he “had not yet forgotten how to play “futba.”   He played three first team games in the Second Division and two in the United League without scoring.  He got one goal in three F.A. Cup games.  He played in many reserve and friendlies that season but retired at the end of the season.  His last reported game was on the 4th March 1899 in a 4 1 defeat at Burslem Port Vale.

Hugh’s fame extended far and wide and the Dundee Evening Telegraph published an interview, below, on 26th February 1898 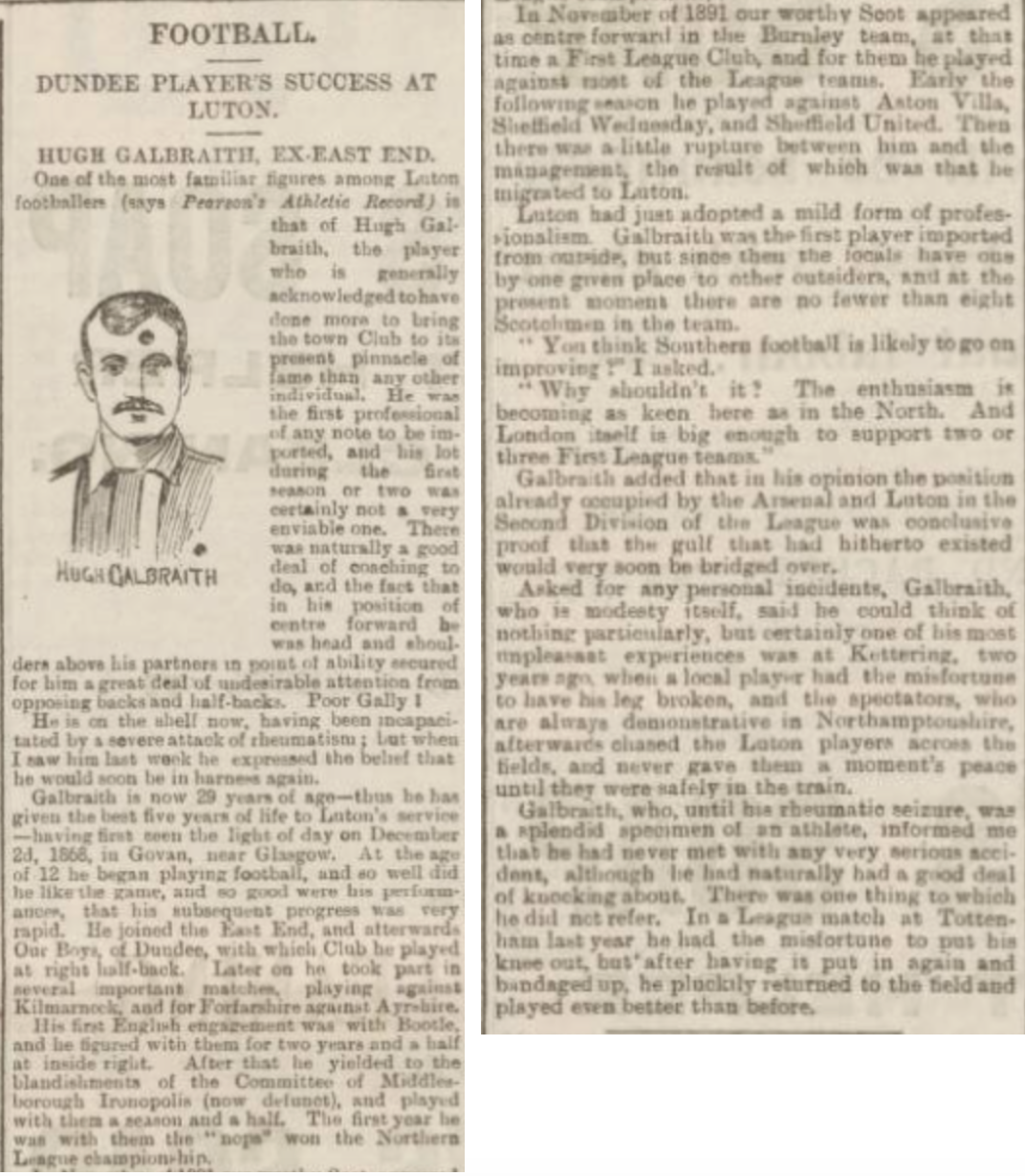 Gally’s goalscoring record was impressive – all the following are first team goals;

1898/99 – 3 goals – 1 in the F.A. Cup and two against Watford in a first team friendly.  Hugh played mainly in the reserves this season.  His health broken, he retired from “futba” at the end of the season.

Games include the Southern League, United League, F.A. Cup, Luton Charity Cup, Kettering Charity Cup and first team friendlies.  The latter category were very important as there were only 18 Southern League games in a season and the players needed other games to keep them sharp.  The friendlies included games against some of the top league clubs in the country such as Nottingham Forest, Newcastle United, Wolves, Preston, Derby County, Everton and Sheffield United (whose goalkeeper Bill “Fatty” Foulkes broke the crossbar making a save). 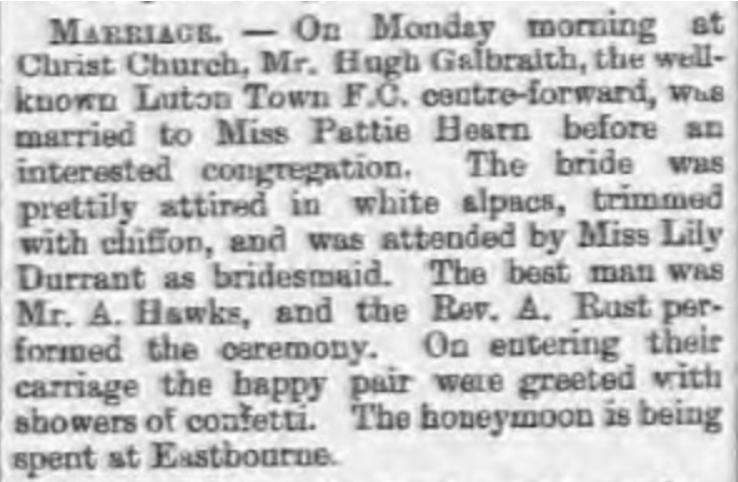 Hugh married a Luton girl as set out (left) by the Luton Times of 8th July 1898.  Note the honeymoon in Eastbourne – one would hope that Gally had his photograph taken with his wife on this occasion.

After giving up football Hugh turned to the manufacture of hats.  The advert, left, is from the Luton Times of the 13th April 1905

The clip, left, from the Luton News of August 1905, shows that Hugh was not forgotten and was used as the benchmark for assessing a forward.

If further proof were required of the great affection in which Gally was held by the Luton public, the appeal, left, appeared in the Luton Times of 20th November 1908

The clip, left, from the Annual General Meeting in July 1909 reveals the amount raised.

Hugh death was reported widely and the clip, left, is from the Yorkshire Post of 3rd March 1930.

Hugh Galbraith is one of the greats of the club yet, like many of this era, has not received the applause he deserves.  His goal scoring record ranks with any in the clubs’ history.  He is the first of many truly great forwards the club has had since 1885.