Herbert Frederick Holdstock was born in St. Albans in 1879 where his father worked in the hat trade.  However, his father was a Lutonian and as the hat trade in Hertfordshire declined, the family moved to the World Hat Headquarters that was Luton.  In the 1891 Census the family is living at 11 Villa Road, Luton.  Bert went to St. Matthews School.

Bert later went to the Higher Grade School in Luton, the same school as Bob Hawkes and they both represented Luton Schools as the clips below show.  Another future Luton stalwart, Fred Hawkes also appeared along with some very familiar Luton names.  The first clip is from the Luton Times of 19th April 1895 when Bert was at St. Matthews.  The second clip is from The Luton News of the 6th March 1896. 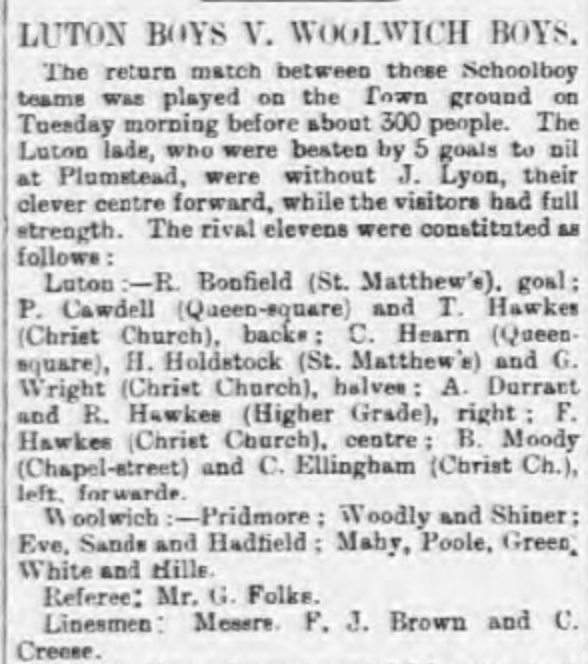 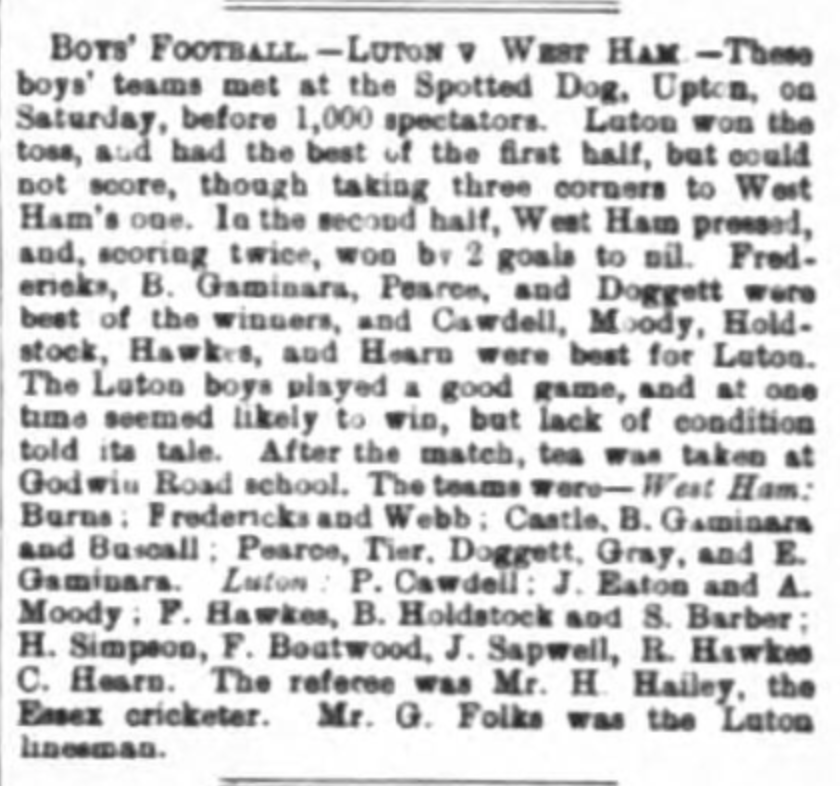 Bert had a successful spell with Luton Star and was then signed on by the Straw Plaiters in September 1896.  The club committee resolved on the 14th September 1896 “to sign Holdstock as a pro at 10/- per week.”

making his first team debut away to Sheffield Wednesday in November 1899.  The entry below is from the Luton News Football Handbook of 1899/00. 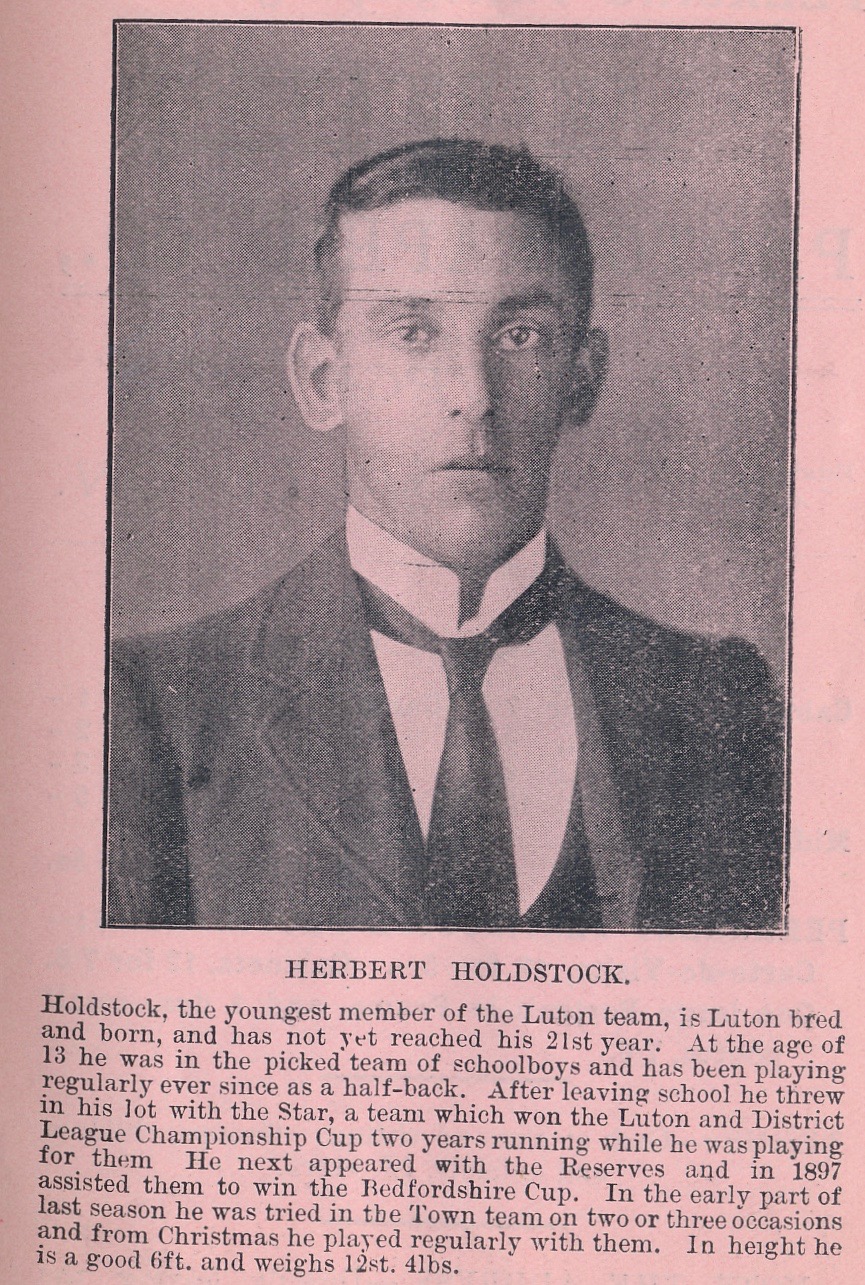 Bert was highly thought of and his progress was followed by many clubs.  The newspapers latched on to Bert and the clip below left was reproduced in many: this is from the Monmouthshire Beacon of 26th October 1900. 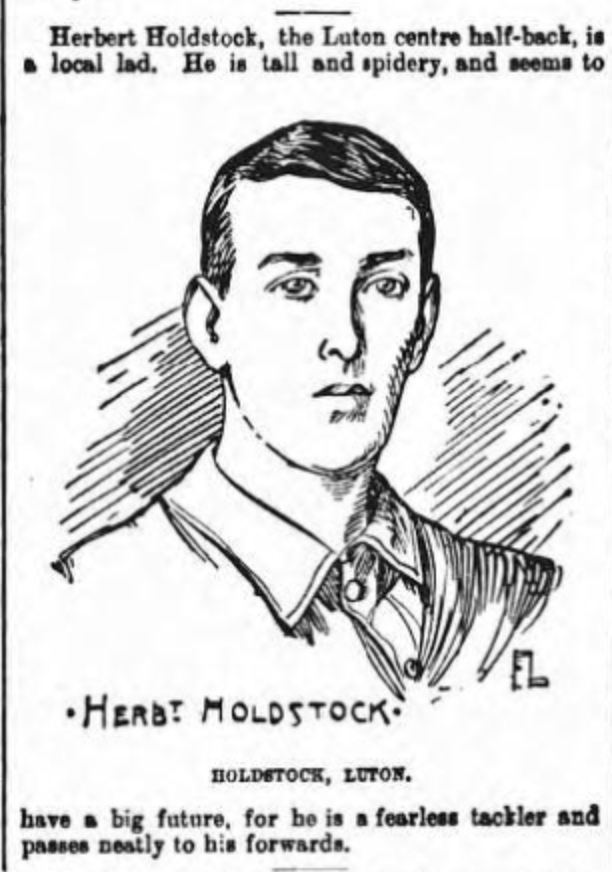 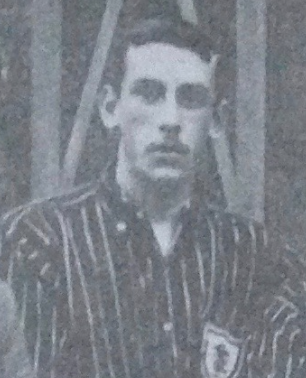 In 1901 he was a Straw Hat Blocker working at home, 92 Old Bedford Road, Luton, for his father’s business.

“Never one of fortune’s favourites, has sustained a loss thus early, Holdstock, who took part in the first practice match, having met with an accident which will prevent him playing again.  This talented young centre-half suffered last season from a weak knee, and on Sunday, as he was going upstairs, he slipped, and wrenched his knee so badly that he has finally decided not to attempt football again.  He seemed likely to be one of the best footballers ever turned out of Luton, and his brilliant play last season attracted the attention of more than one first league club.”

The Luton Times of 10th January 1902 reveals his injury cost him a regular place in the first team;

“A quaint, Townsend-like figure in the half-back line is Holdstock, a young giant of 6ft., who was making a first appearance on behalf of the Luton first team this season.  Time was when the tall and spidery half could hold his own with any of his contemporaries in the Southern League, but he hurt himself last year, and suddenly disappeared from the more important matches.  If there is a more slender man playing football this year, I should like to hear about him.”

Bert’s injury meant he only made 42 first teams appearances for the Straw Plaiters scoring 2 goals.  However, Notts Forest took a punt on him in the Summer of 1904.  The Edinburgh Evening News of the 2nd June 1904 gave a list of the reds new players including “Herbert Holdstock, a Luton born half-back, who stands 6ft and weighs 12st 4lb.”  It appears that the intention at the start of the season was for Bert to slot into the first team.  However, he played most of the season in the reserves.

He was chosen to play in the first team for the game on the 8th April 1905.  The Nottingham Evening Post previewed the game against Newcastle United at St. James’ Park;

“Timmins and Morris will again be absentees, and the selection of Holdstock to take the left half position will come as a surprise, the lengthy Lutonian not having been previously called upon in First League football.”

The reds were beaten 5 1.  Bert is only mentioned twice in the report, both times mentioning his good play.  It was not enough however, as that was his only first team game.  The newspaper described his form in their end of season review as “disappointing.”  Bert returned home.

The Luton News of 25th May 1905 latched onto the fact that Bert was back in Luton and said “Holdstock always was a good man, and unless he has deteriorated during his season with Notts Forest, the directors may go further and fare worse.”  The club minute book shows that the directors thought long and hard about signing Bert on for the 1905/06 season.  In the end they decided against and he never played for the Straw Plaiters again.  Bert also managed to find time to serve on the committee of the Bedfordshire Football Association and was one of their officers at their AGM in June 1905.   He did play football for local teams such as Luton Melrose but he decided to concentrate on cricket. 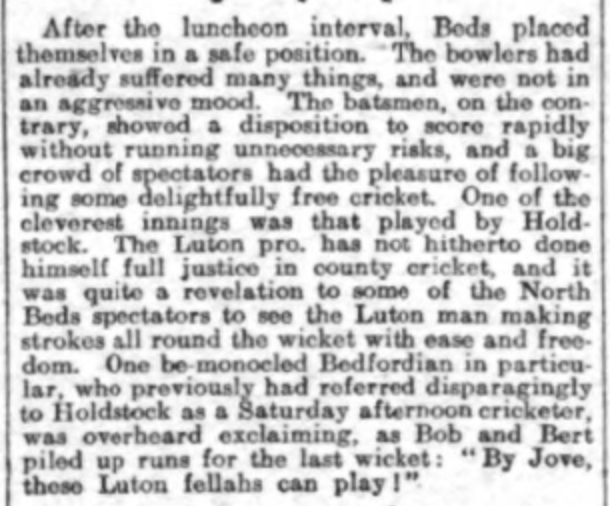 His injuries did not seem to affect his cricket and Bert played for the leading cricket club in the town, Luton Liberal Club and scored 178, including 28 4’s on 31st July 1905 against a Bedford team. His form with the bat had attracted the county team and his first cricket game for Bedfordshire came in August 1901.  He struggled at first to make an impression in the county side but the clip left from the Luton News of the 16th August 1906 shows he turned it round.

The Luton Town Cricket Club was formed for the 1906 season and Bert was appointed club groundsman for the Wardown Park cricket ground.  I have taken a summary of Bert’s career directly from the “History of Luton Cricket Club 1905-1980.”

“Bert’s association with the Town cricket club lasted until 1928 when he left the club.  In 19 seasons he scored 13,456 runs at an average of about 45 and he took nearly 1,100 wickets at an average of just under 12 runs per wicket.  This last figure is all the more remarkable when it is remembered that in his first 2 seasons with the Club he took only 3 wickets.

After the Second World War he returned to Wardown as groundsman for a short time before retiring.” 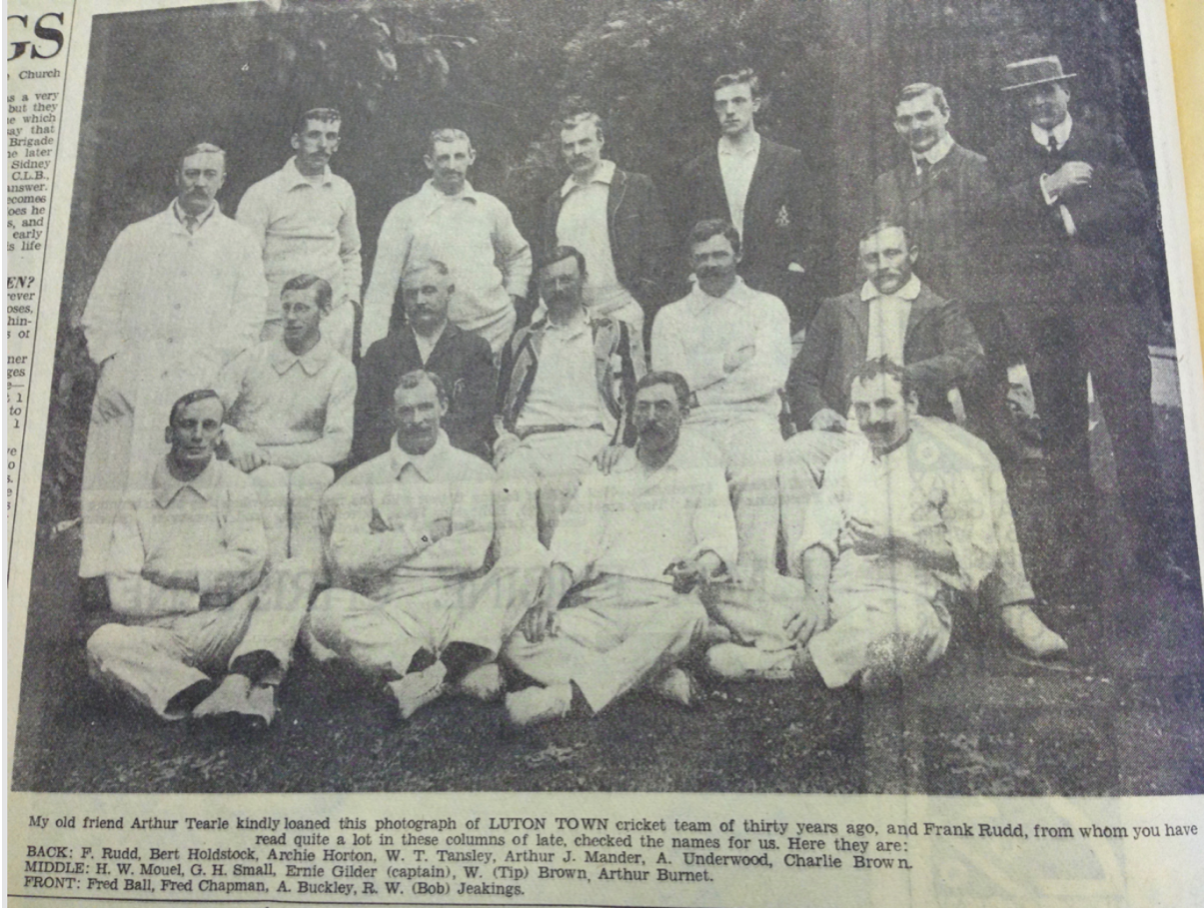 The above photo shows the 1908 Luton Town Cricket club team.

In 1910 the cricket game against Wolverton was set aside as a benefit game for Bert and the sum of £10 was raised, the highest amount raised for such a game.  The 1911 Annual General meeting reveals that a payment of £42 was made to Bert for his duties as the professional at the club.  At this time the census reveals that he lived at 31 Reginald Street with his wife Emily and daughters Doris and Madge.  His mother and father lived with them.  Bert was still a blocker but also a machinist.

He missed much of the 1921 season due to injury but returned as the Luton Town club professional for 1922. 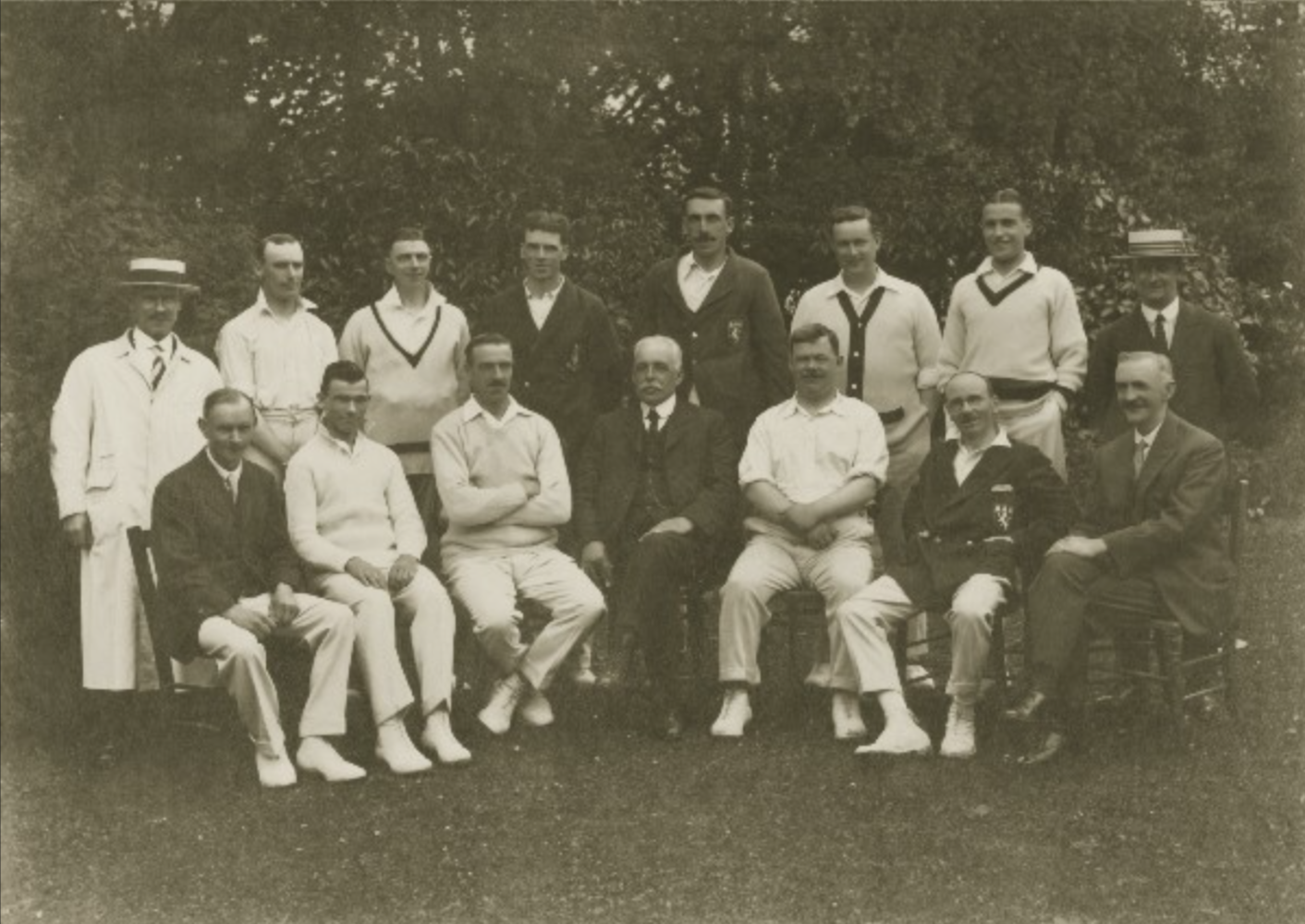 In the Summer of 1928 Bert was appointed as trainer to Luton Town Football Club’s reserve team playing in the London Combination.  It was also in 1928 that Bert resigned as Groundsman in order to take up a new post with the London Brick Company at Wootton where he would supervise the laying out of a large sports ground and also act as professional to the cricket section.  The captain said that Holdstock has served the club well for many years and they all wished him the best of luck in a new and better job.

His record with the Luton Town Cricket Club was as follows; 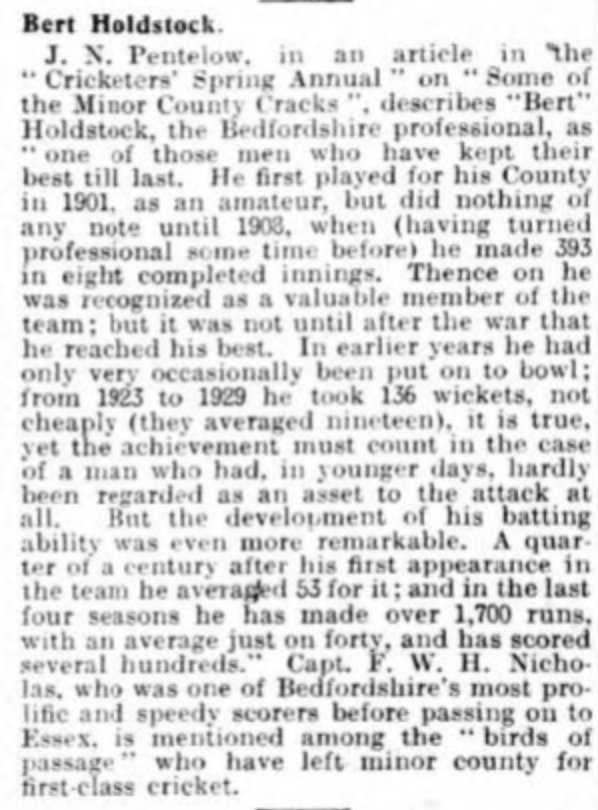 Bert’s career with the county side was also a long one as revealed by the Bedfordshire Times of the 9th May 1930, left.

For Bedfordshire CCC he scored 5,302 championship runs to put him behind JAR Oliver & GLB August in the all time list. He racked up 11 tons and 19 50’s.

His highest score was 150 v Hertfordshire at St. Albans in July 1928. He also scored centuries in 1922 and 1929 in addition to the newspaper article above.

He played against Norfolk County CC 18 times scoring a meagre 382 runs in 28 innings.

And the Bedfordshire Times of the 7th August 1931, below.

Bert continued to play for Stewartby during the 1930’s.  A presentation was made to him in 1946 as reported in the 28th June edition of the Bedfordshire Times, left.

Bert was made a life member of the Bedfordshire County Cricket Club in December 1949 and an honorary umpire at the same time.  He tended the Wardown Park cricket pitch and received the following accolade as reported in the Luton News of 1st June 1950. 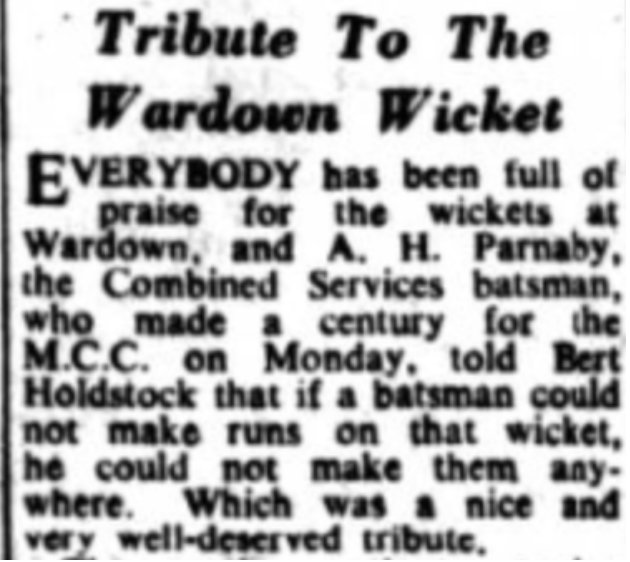 Herbert Holdstock died at the end of 1965 in Bedford. There is not an obituary in ‘Wisden’.

I am indebted to Peter Webley for Bert’s cricket records which are taken from “A History of Luton Town Cricket Club 1905-1980.”