George was born in Berkhamstead in October 1861 and was christened on the 24th November the same year.

In 1871 he was living with his parents, William and Mary in Watford.  They were still in Watford in 1881 when George was a farm labourer.

He married Clara on the 27th October 1879 at St. Matthews Church, High Town.

George was an Excelsior man before April 1885.  The first positive mention in the newspapers of hi playing for Luton Town is February 1886 when he was in the team that beat Higham Ferrers away.  Hecontinued with the reserves in the main,  playing at back or half back.  George answered the call to the first team whenever he was needed and played a big roll in the 1889/90 season.  There appears tp have been some conflict with the club as revealed by the minute book entries –

25th February 1890 – “Hon sec stated that Mr Humphrey had returned his shirt without any explanation as to why.  Therefore it was resolved that Hon Sec should obtain some sort of explanation about the matter and report to the adjourned meeting to be held on Wednesday 26th at 8PM”.

26th February 1890 – “Hon sec said he had seen Mr Humphrey and that after things had been explained to him he said that undoubtedly he was labouring under a misapprehension and as such was the case he certainly apologised to the committee for the course he had taken and promised to send for the shirt back again”.

Conflict resolved, George helped the team reach the final of the Kettering Charity Cup in 1890.  the first game was drawn.  The replay saw much drama including an serious injury to George when he was playing in fine style –

“Humphrey had stopped one of his opponents, but by some means his leg became twisted and he sustained a severely sprained knee.  He at once fell to the ground, and the game was suspended while he was being attended to.  After about five minutes cessation the match was proceeded with and Humphrey pluckily resumed his place amid general applause, though he was almost disabled.”

Ernest Lomax was also injured and the Straw Plaiters slumped to a 3 0 loss.  The injury to George was generally considered to be the turning point in the match.  The newspaper report continues

“The return journey was undertaken in good time, and home was reached shortly before 10.  Humphrey, who had been attended free of charge by Dr. Allison in the dressing-room at Kettering, was placed in the players’ saloon, and on reaching Luton he was ministered to by Dr. F.W. Clark, who had been telegraphed for, and subsequently removed to his home.  He is progressing as well as can be expected, and it is satisfactory to be able to state that in consequence of the team having been insured against accident he will be amply provided for during his period of enforced retirement”.

“Sir, Kindly allow me a space in your column to correct an error that appeared in your last issue in the report of the match, vis., that through the Luton Town Club insuring the team against accidents I am “amply provided for” during my enforced retirement.  Such, unfortunately, is not the case.  The “ample” provision made through the insurance of the team is an allowance of £1 per week from the Insurance Society, and whilst grateful for such a provision having been made, the amount is quite inadequate to supply the necessaries consequent upon an accident similar to that which befell me in the above match, without saying one word about the loss of time, etc.

I am progressing as favourably as can be expected, and hope to leave my bed for the first time since the accident in the course of a few days.  Yours faithfully, George Humphrey, Luton, 30th April 1890.”

George recovered from his injury and played for the Straw Plaiters at the start of the 1890/91 season.  However, he left in November to join St. Albans.  The Hertfordshire newspapers carried the following story. 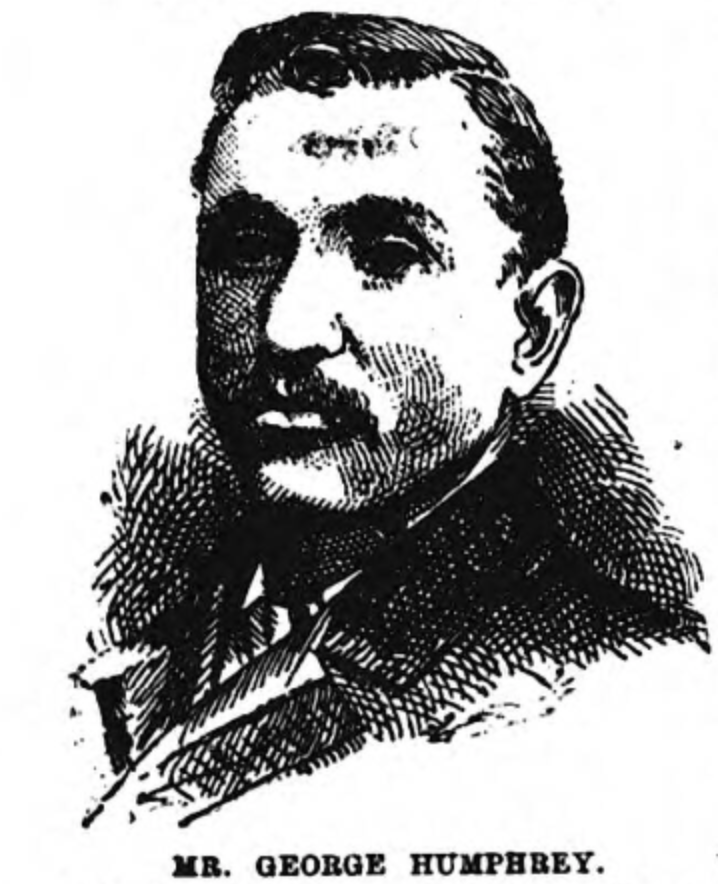 The 17th January 1891 Luton Reporter, “With Bat, Ball and Bicycle” commented that

“the prominent Hertfordshire football player whose portrait the “Herts Advertiser” presented to its readers last week was Mr G. Humphrey, who until quite recently was a member of the Luton Town team, and who has since, owing to a regrettable misunderstanding on the part of the local players, transferred his allegiance to the authorities at the cathedral city.  The cut is accompanied by a highly complimentary sketch of the player’s football career, and from what I know of the subject the article it seems in no way unmerited.  Referring to his first appearance for St. Albans four years since the writer says: “Since that time he has played with slight intermissions for the city, and won himself the reputation in local football as a reliable and even dashing back.  Prior to the occasion referred to Humphrey’s attentions had been confined to the very minor clubs, and until St. Albans “brought him out” it was not known of what sterling material he was made.  His position has always been at full back, and his powerful and sure volleying combined with his sound judgment has often proved of good service to the “Saints.”  Since his debut at St. Albans he has wonderfully developed, and many votaries of the game have been surprised at the excellent form he has shown.”

“Passing on to speak of his performances the writer remarks:- The county matches in which he has played have not been numerous, but he has acquitted himself creditably at Ware against West End, against London Reserves, and against Huntingdon at the latter place.  Luton, where he now resides, has also benefitted by his services in many of their important matches.  He obtained a medal for being one of the winning team in a six-a-side exhibition competition at Luton on August 31st, 1889.  He also assisted the Bedfordshire town in their fixtures in the Kettering cup competition and received a medal for playing through to the final last year, when Luton fell under to Grantham.  It was while playing in this match that he received the only really serious accident he ever had, and this fact no doubt lost Luton the game.  Half-time was nearly reached and no goals had been scored on either side, when Humphrey was hurt, and about five minutes afterwards Grantham scored.  I hear that he will form part of the St. Albans cup-team this year, and there is no fear of a repetition of last year’s occurrence, for he intends to play for one club only this season, and St. Albans always have first claim.”

In 1891 he lived at 73 Duke Street, High Town, with wife Clara, daughter Clara and a nurse.  George is described as an engineer. After this date tracking George down has proved difficult.