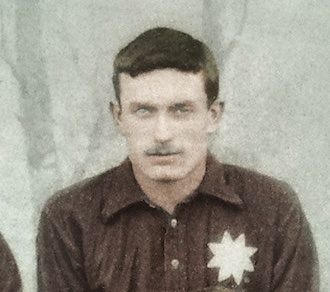 Born in Luton in the Summer of 1872.  William or “Manny” as he was nicknamed is one of those people whose name is misspelt by the press time and again.  He is wrongly called Chesher more often than his correct name, Cheshire.  In one report he is called Chesher and Cheshire in the same sentence!

“Has not a very long record in first class football having only taken his degree with the Town eleven at the latter part of the last season.  He always had a predilection for the game, but it was not until four or five years ago that he blossomed forth into a regular player, when he fought in the ranks of the Terriers.  His form was so good last season that he attracted the attention of the Town Executive, and the consequence was that he played for the premier club on several occasions, his first game for the first eleven was against Old St. Mark’s when he played at full back.

Subsequently he occupied a number of different positions in the field, but this year the Town committee decided to “stabilise” the playing position of all members of the senior side from which time he became regular inside or outside left.  A few weeks ago I had occasion to point out that he was not doing himself justice, but with that exception he has been of immense service to the team.  He has the coolest headed of the whole eleven and goes about his work with a calmness that must be exceedingly aggravating to those whom he so often circumvents.  I don’t think any member of the team will be disposed to quarrel with me in giving credit to Cheshire for being the deadliest shot of the lot, he puts plenty of power behind the ball and keeps it low.”

In 1881, Manny and his family lived at 7 Windmill Street (now Welbeck Road, off High Town Road).

In 1891 Manny was living with his parents at 73 Burr Street.  He was a Straw hat Manufacturer possibly working for his father.

Made his debut on the 1st November 1890 when he played as a back against Old St. Mark’s.

In August 1891, Manny and the other players were offered 2/6 per week as the entire playing staff turned professional.  He was pushed up to play winger with George Deacon the following season. It proved a successful move as Manny was joint top scorer with 14 goals that season.  He was made captain of the reserves in September 1892 and was in and out of the first team.  Hugh Galbraith had arrived for the 1892/93 season and Manny managed only 7 goals.  In August 1893 he was offered 7/6 a week for season 1893/94 and reverted to his position at back.

Manny went on to play for St. Albans.

There is no better tribute to a player when he is recalled with fondness decades later.   Manny was remembered by the football public in 1937 when the Luton News (13/4/1939) reminisced –

“Then comes before me the names of ‘Manny’ Cheshire, ‘The Daisycutter.’  What a cognomen.  Would that Fred Roberts and others could earn it.  To see ‘Manny’ shoot from 30 yards range and not raise the ball above six inches was a common sight, hence his nickname.”