William Brown was born on the 27th June 1874 in Luton to parents William and Martha.  The 1881 census finds him living with his parents and family at 138 High Town Road.  His brother, who was 13 years older, was named Roland.  Confusion can arise in Victorian families because a son (usually the eldest) is often named after the father.  Therefore that son is often known by his middle name for the sake of clarity.  However, without a middle name, a family friend called William “Young Roland.”  The name Roland stuck and he is often referred to as R. Brown and Roland Brown in football reports.  The nickname “Tip” that William acquired is explained further down this biography.

We have a short biography from the Luton News 27th October 1892.

“More familiarly know as Roland Brown, played the first half of last season in the ranks of St. Matthews and afterwards joined the Montrose.  He first came under the notice of the Town Club, by playing as a substitute for “Woodville” [This means that Woodville were short of a player at the start of the game and Brown volunteered from the crowd to play for them].  On that occasion his performance was regarded as a splendid one for a junior, for as a matter of fact the substitute proved to be about the best man among the Woodville forwards.  On the retirement of George Deacon, Brown was given a trial against the City Ramblers on Good Friday, and against the 1st Scots Guards on Easter Monday, and so well did he acquit himself, that his inclusion in the team regularly was regarded as a certainty.  This year accordingly he obtained the coveted “Red” and he has played in all the matches to date.  So far, however, he has been rather badly handicapped through having a different partner almost every time of playing.  There have been many disputes as to Brown’s age, nineteen people out of twenty being under the impression that he has attained his majority but I have the best authority – that of Brown himself – for saying he is only eighteen years of age.” 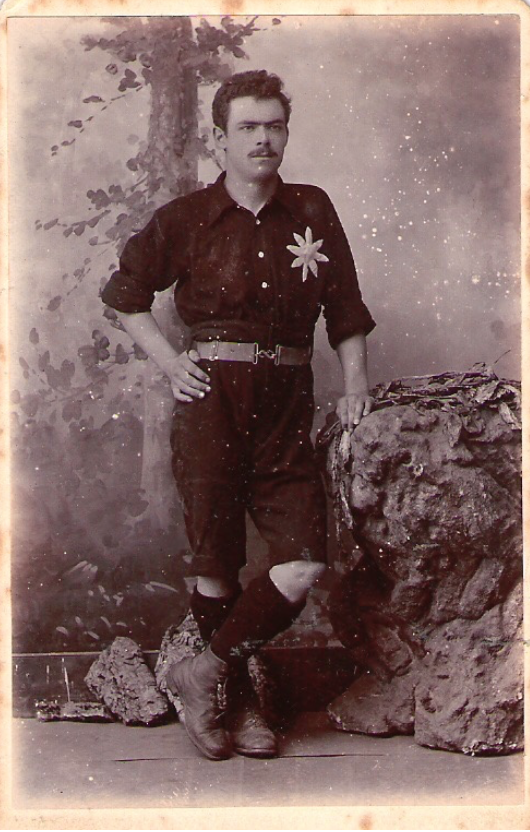 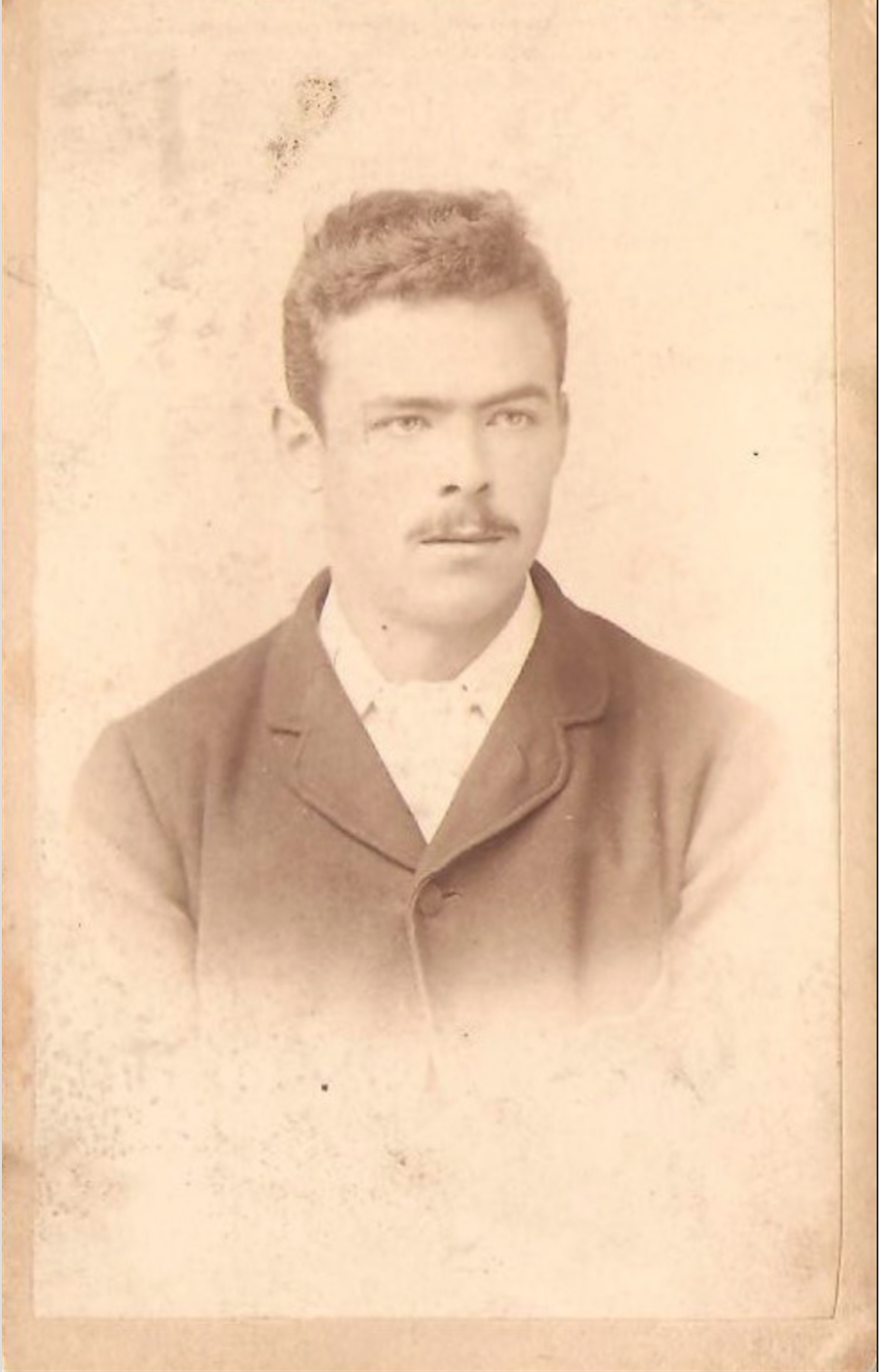 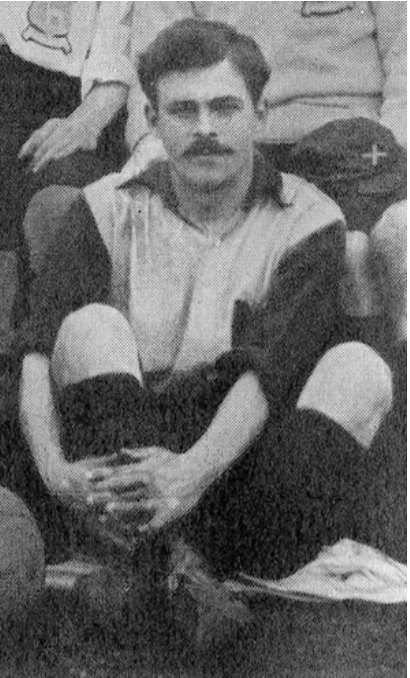 William played regularly in the Luton Town first team following his debut at Easter 1892.  A speedy winger, he provided many crosses for his fellow forwards and helped them win the Luton Charity Cup in 1894.  On entry to the Southern League in the Autumn of 1894 season he was placed into the reserves.  He joined St. Albans the following season and he is pictured (left) in their 1895/96 pink and black shirt.  He made his St. Albans debut on 15th October 1895 and scored in a 2 0 win over Harrow Athletic.  He continued to play for the Saints and played in every match in their 1898/99 season scoring 6 goals from the right wing.  He was considered by some to be the best crosser of the ball in the Southern League.  In 1899 William came back to play for Luton Town and played regularly in the first team and scored 10 goals in 59 appearances.  Tip also played 7 games in the United League in 1900/01 scoring 4 goals.  He then signed for Watford where he was the first choice right winger for most of his three seasons there.  He moved back to Luton for a third spell where he first featured in friendlies and reserve games.  He may have played in a few first team games (the newspapers are unclear as to which Brown played).    Tip then concentrated on cricket and was the opening batsman for Luton Town Cricket Club for over 30 years.

Below is the Luton News Football handbook entry for William’s second spell at the club. 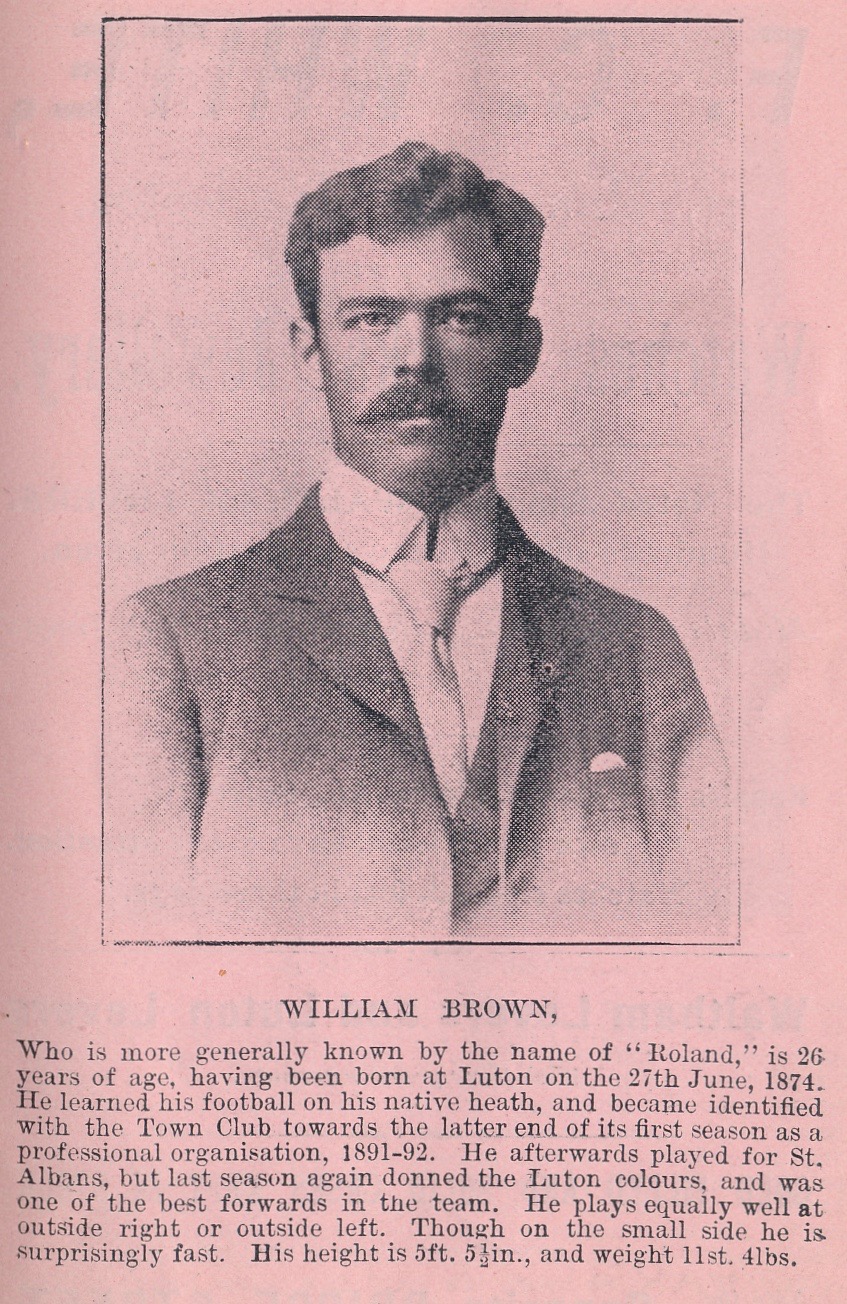 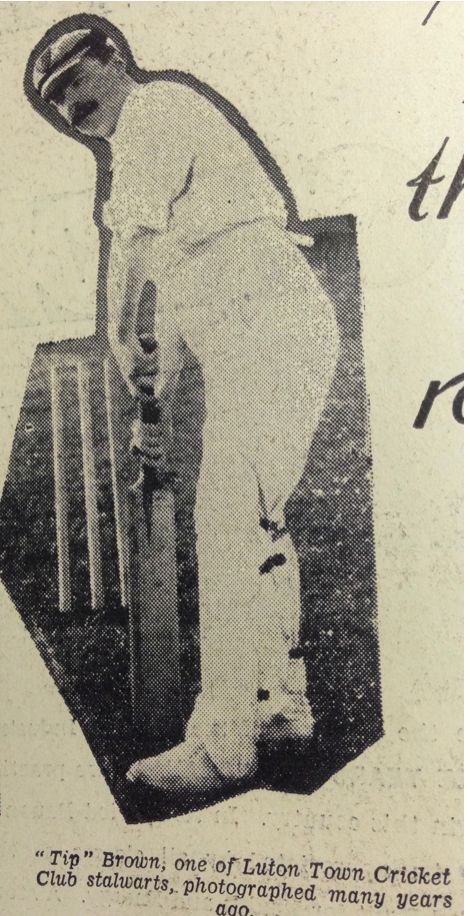 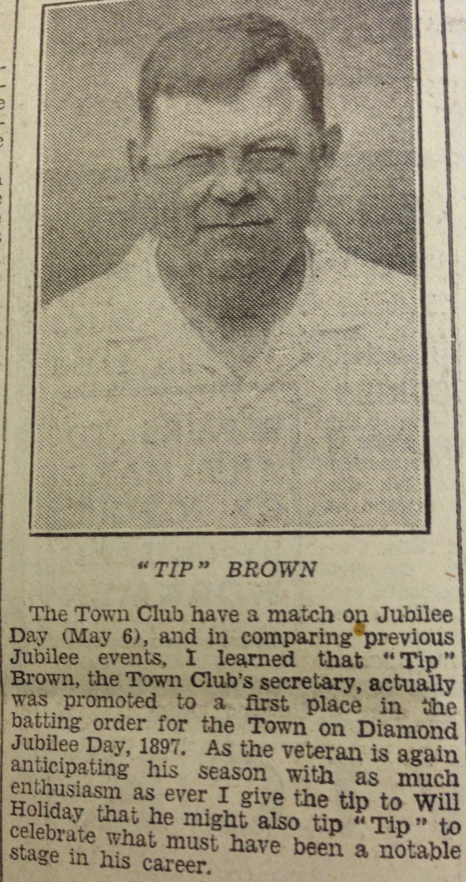 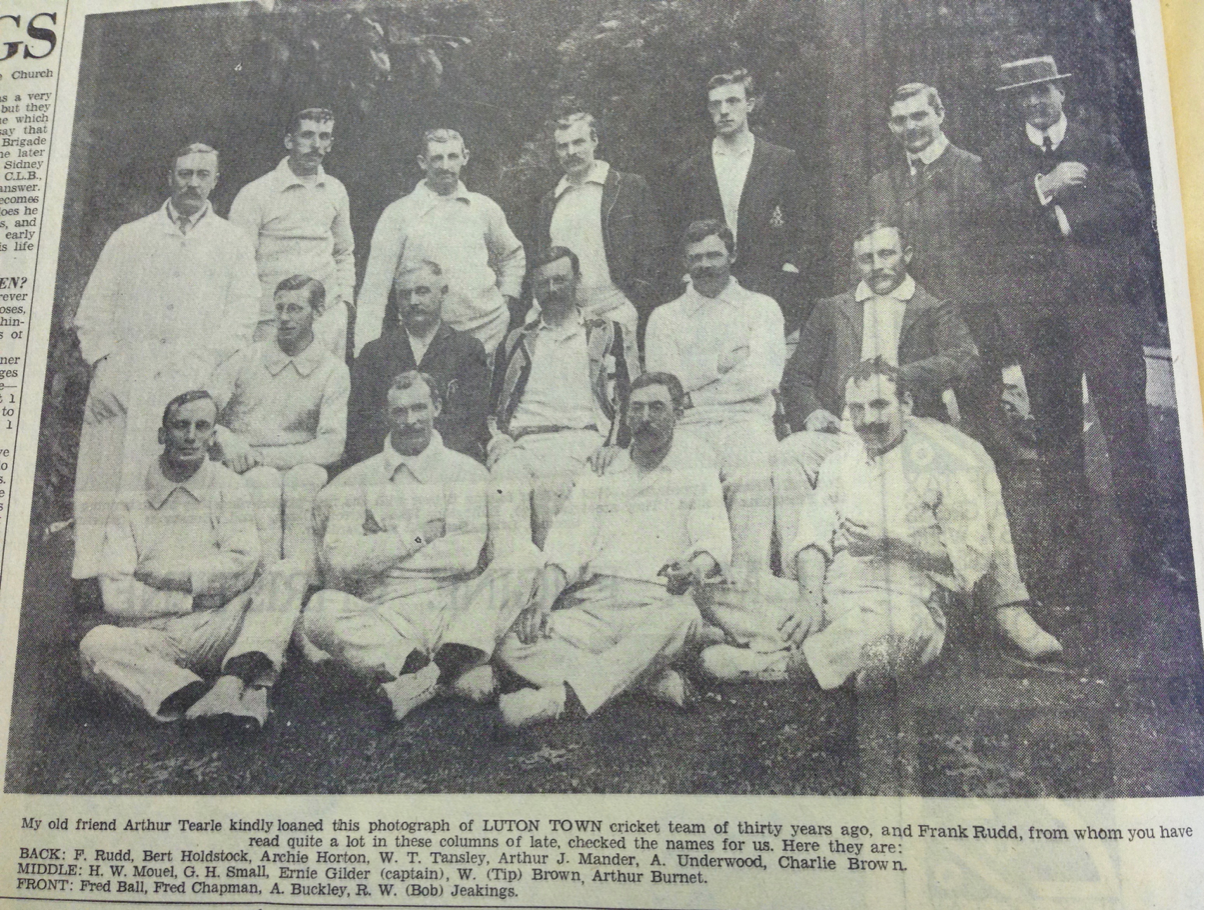 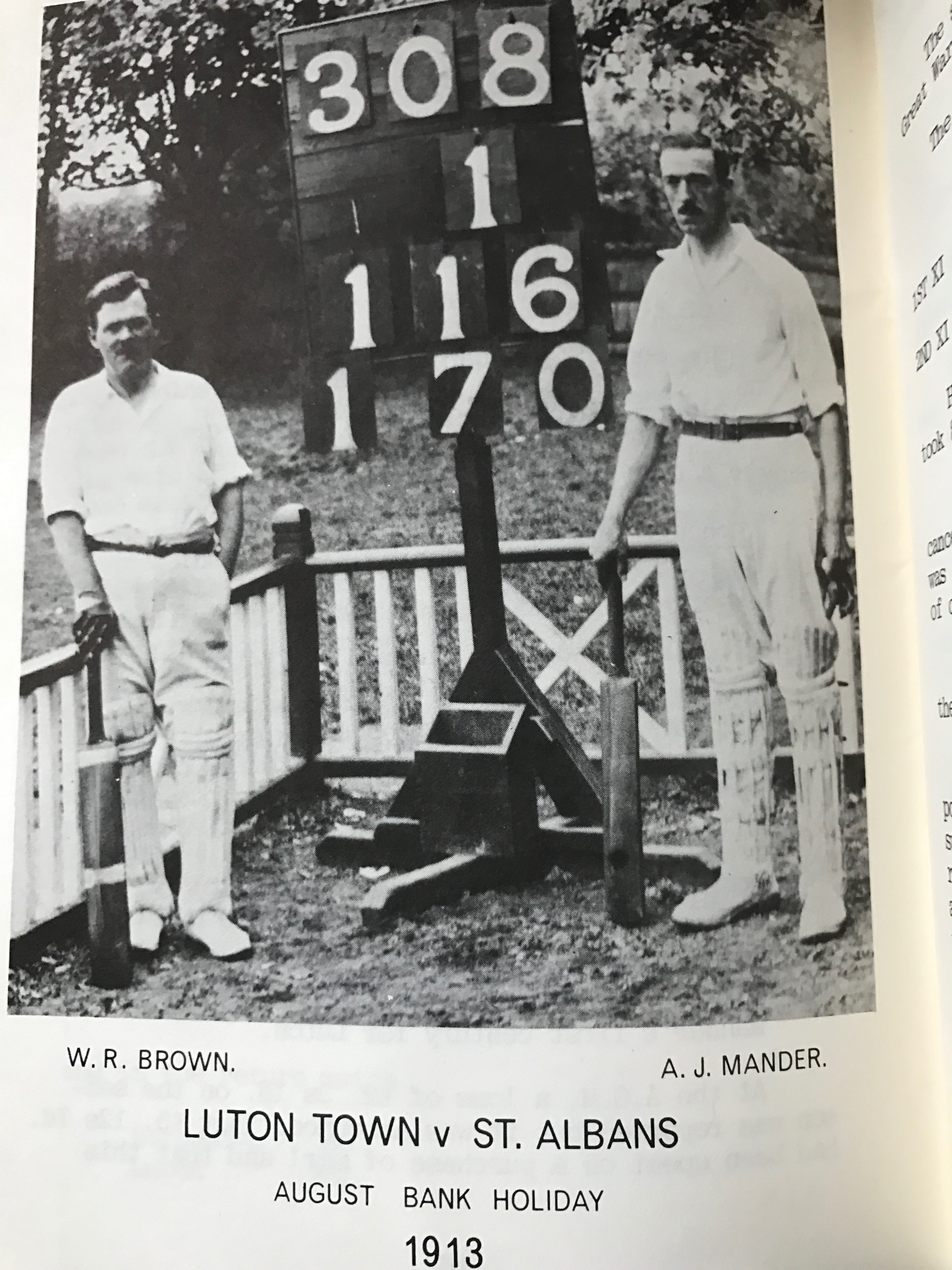 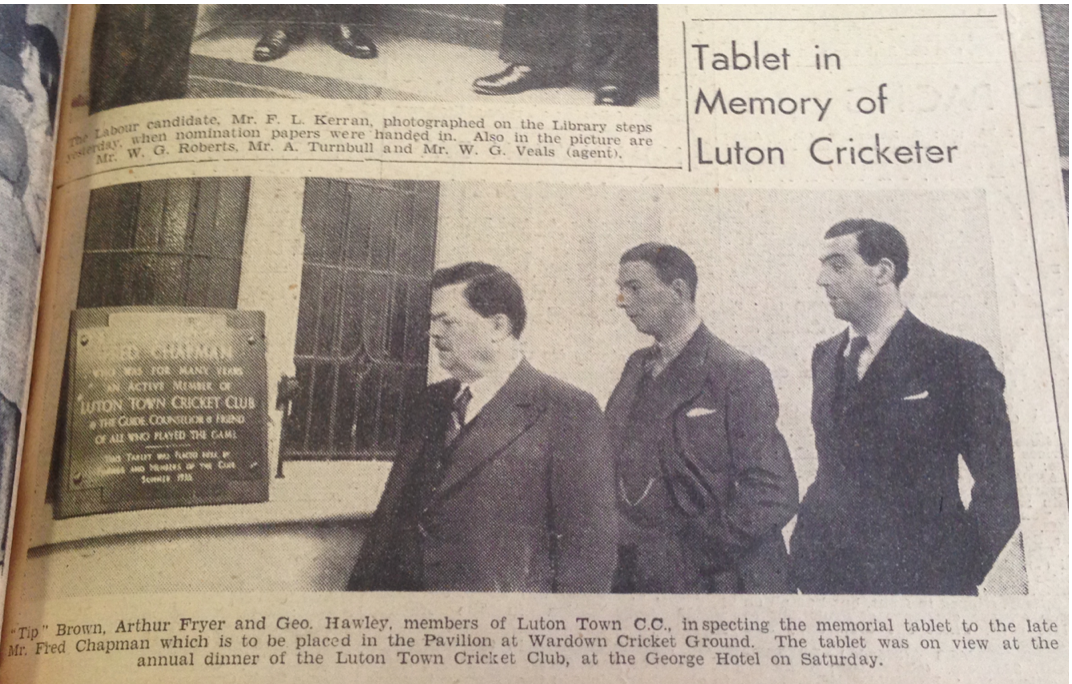 Above from the Luton News 5th November 1935 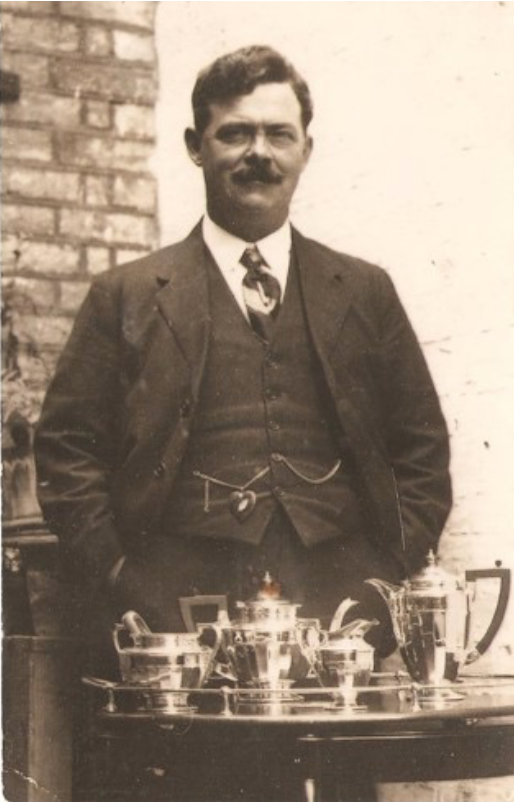 The above photo needs some research to identify the occasion. 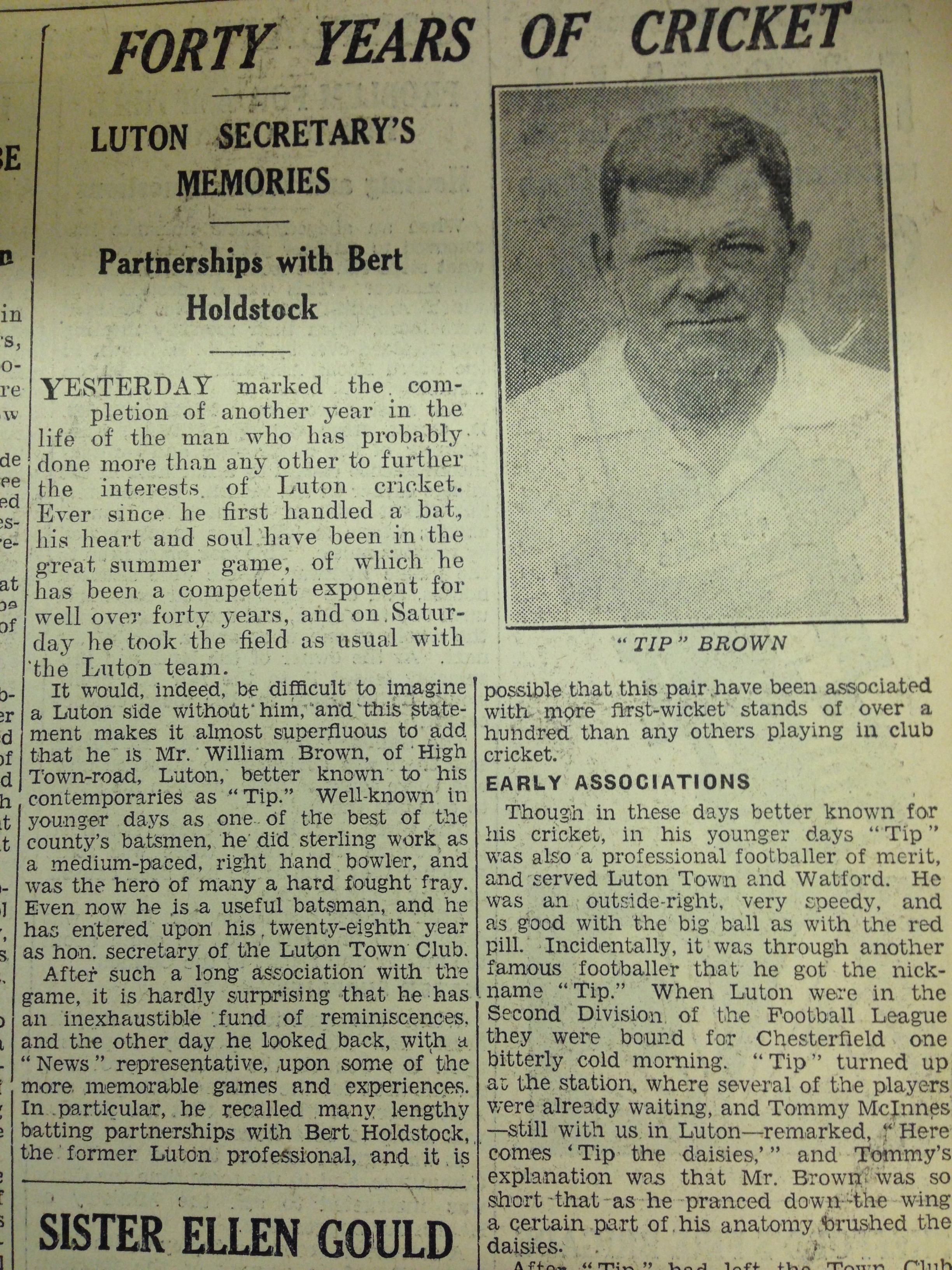 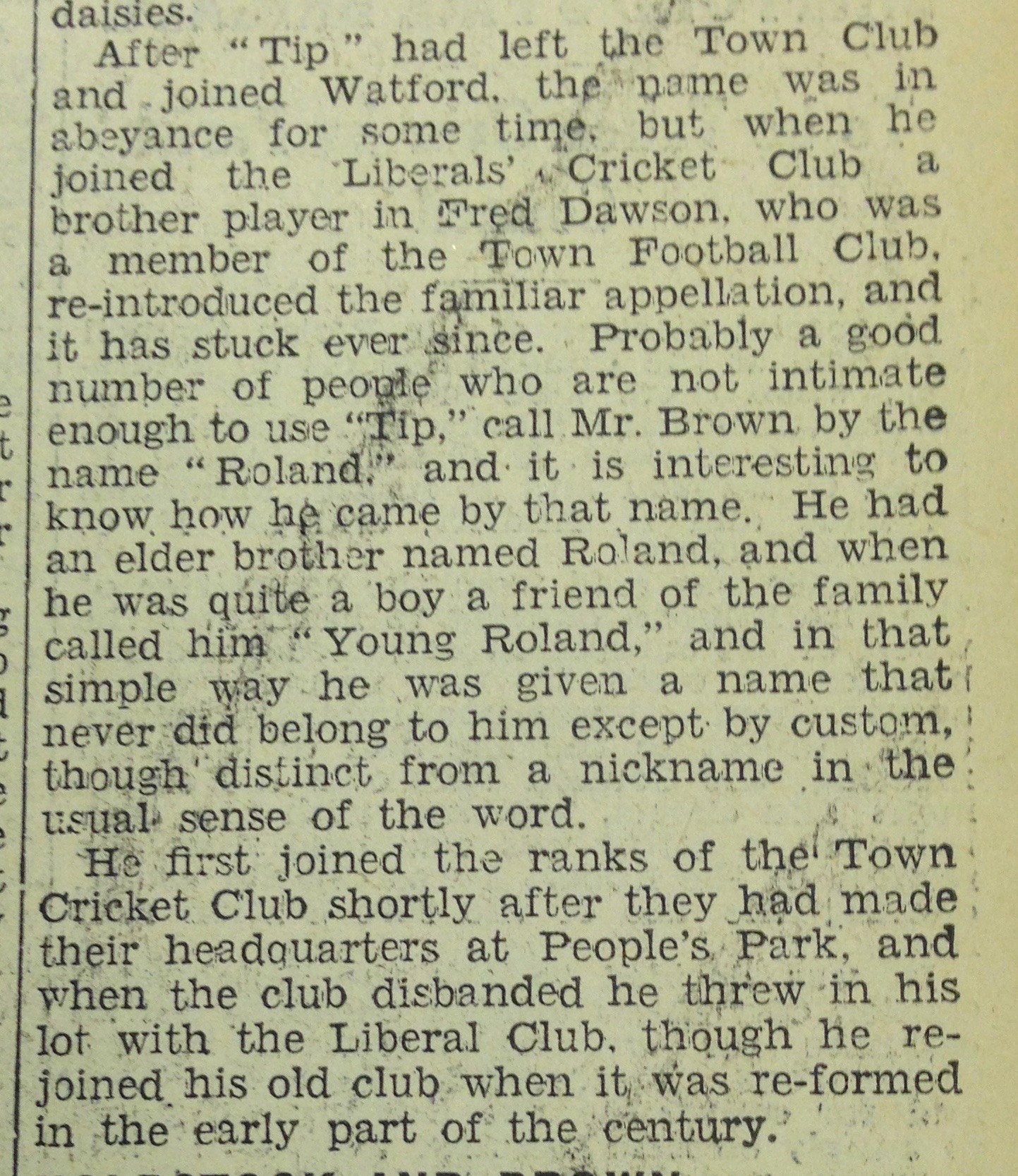 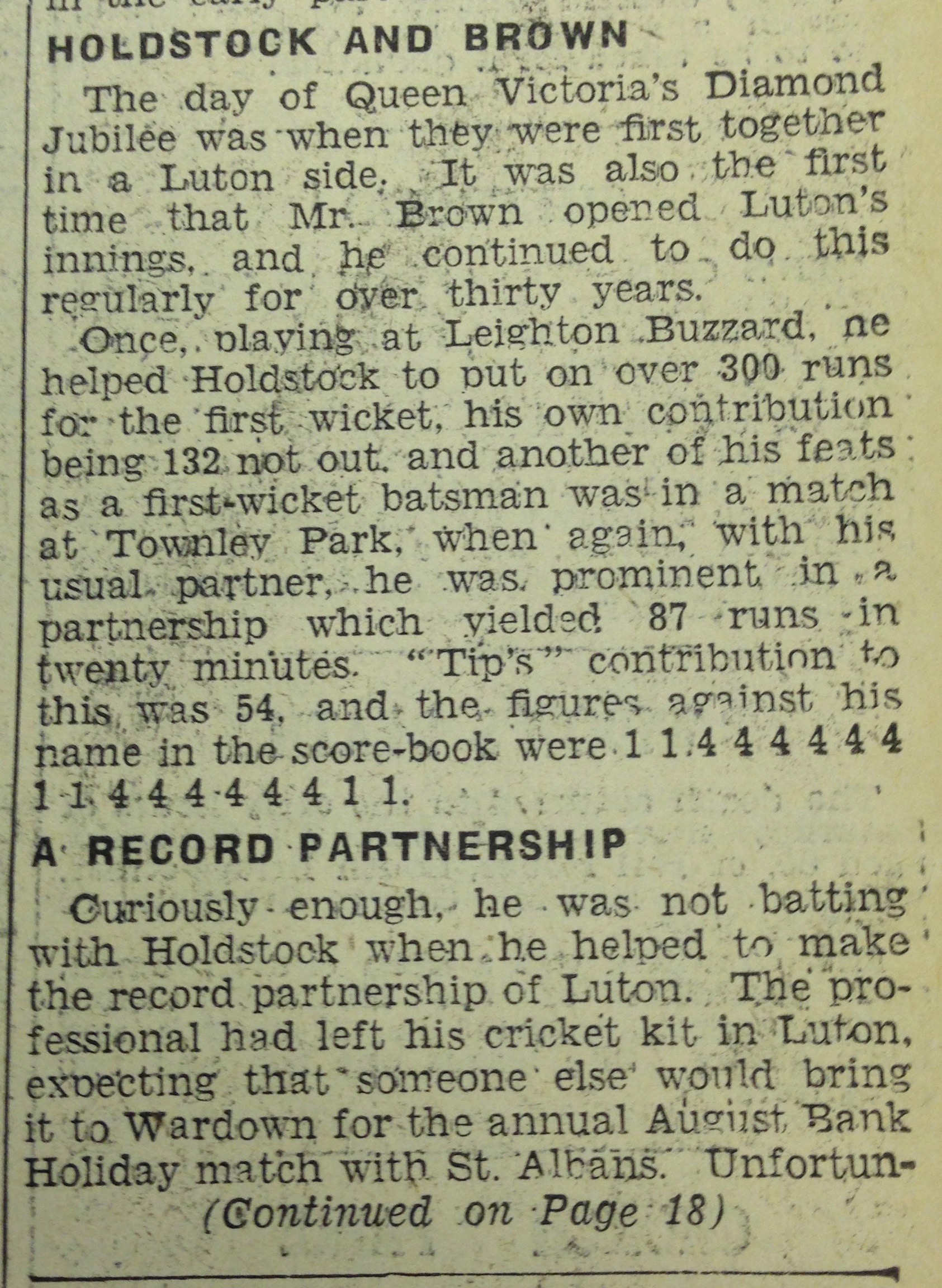 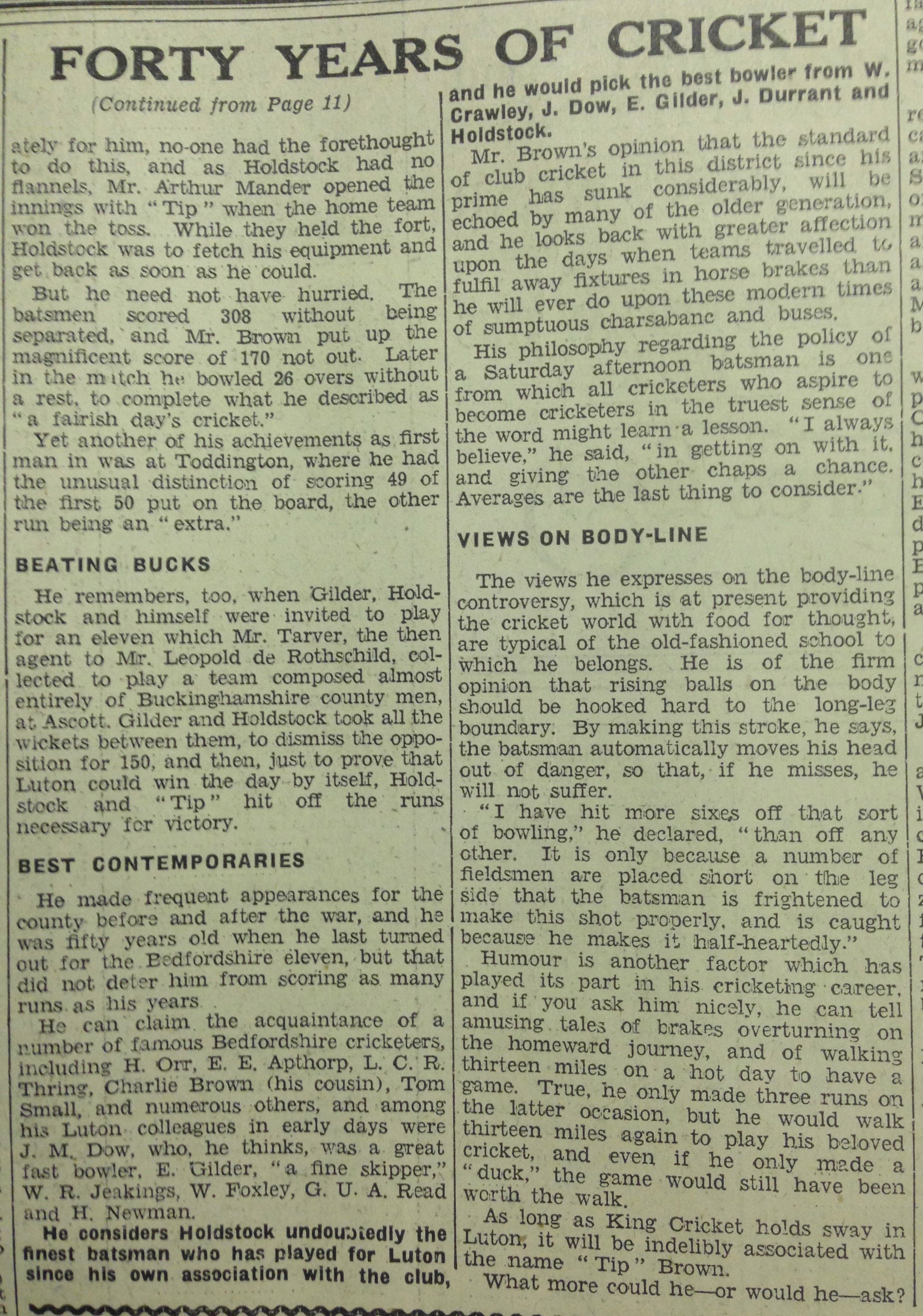 When I found out that William died in 1940 I feared that there would be little or no mention in the newspaper bearing in mind the war.  It is a mark of the man that he was given such attention by the Luton News below.

“Tip” Brown’s Death loss to cricket in Luton and the county.

Members of the Luton regular and special constabulary, sporting clubs, and local business organisations were represented at the funeral yesterday of Mr William “Tip” Brown of 142 High town-road, Luton.

Mr Brown was perhaps best known for his association with Luton Town Cricket Club of which he was hon. secretary for 33 years.  He had also played an important part in fostering the game in the county.

It was only in recent years that he ceased to be a playing member of the Town Club.  For more than 30 years he opened the Town innings, and with Bert Holdstock, was associated in many first wicket stands of over 100.

With Mr Arthur Mander, he took part in a record stand for the club when they put on 308 against St. Albans.

Mr Brown also played regularly for Bedfordshire both before and after the war, and was 50 when he also turned out for the county.

He represented the Town Club on both the Bedfordshire County Cricket Club Committee and the Club Cricket Conference and his passing will leave a gap in local cricket which will be difficult to fill.

At one time a footballer of some note, he played outside-right for Luton Town and Watford, and it was during his football career that he earned the nickname “Tip”.

Apart from his activities in the sporting world, Mr Brown was a member of the Luton Special Constabulary, and was carrying out his duties until a few days before his death, which occurred on Saturday, after only two days’ illness.

He was a member of the Liberal Club and of the High Town Methodist Sunday School Adult Class.  By profession he was a hat manufacturer.

The funeral service was held St. Matthews and he was interred at the cemetery.  The Constabulary, Football and Cricket clubs were represented along with many important figures in the town.” 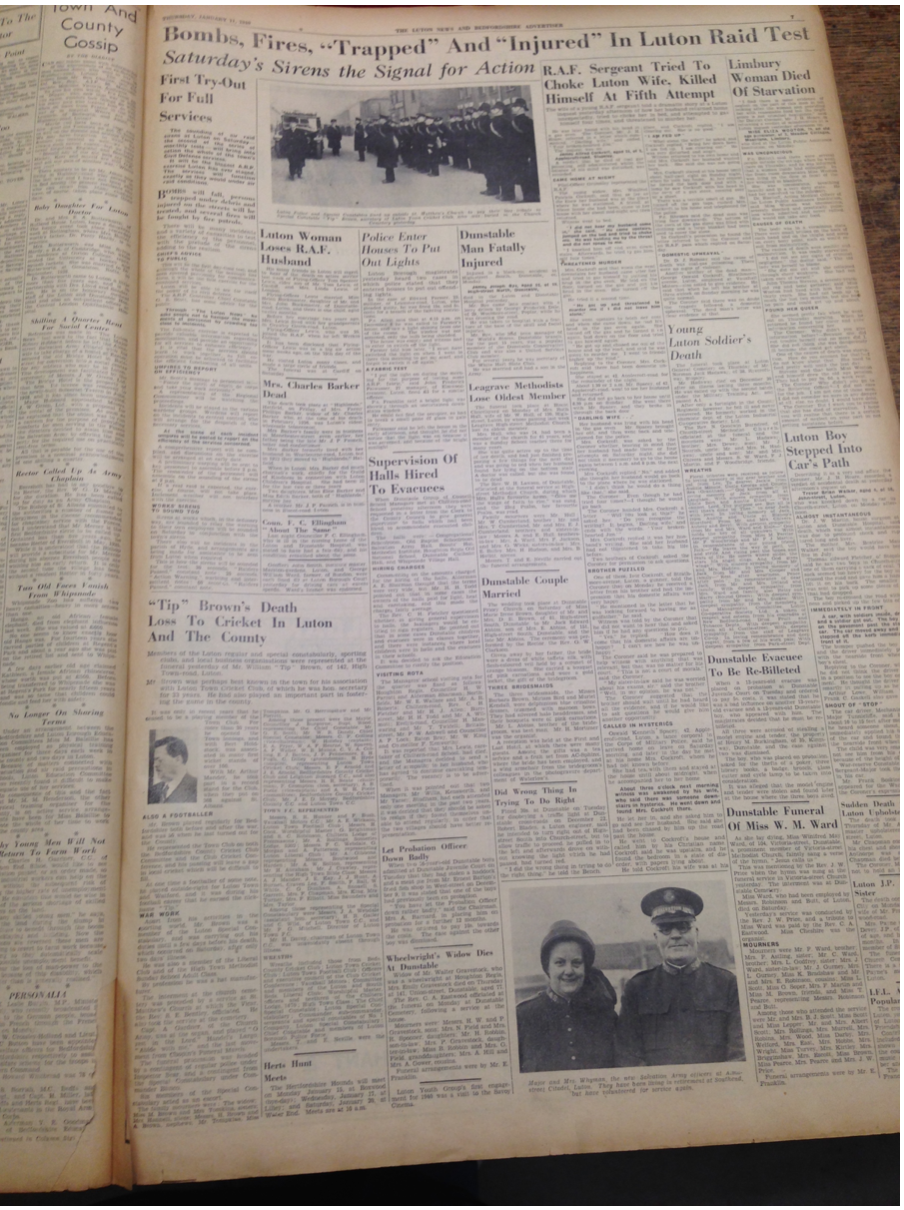 Thanks to Margaret Martin who kindly provided the photographs of young William and the tea set photo.