Reverend Charles William Bennett was born on 17th May 1865 at Elmley Castle, Pershore, Worcestershire.  Baptised 28th May 1865.  Attended Stratford on Avon School.  He obtained a B.A. at Oxford University in 1887.  Became a curate at Harpenden in 1890.  Quotes are from the St. George’s School newsletter.

The 1888 team profile for the School reveals that;

“Though new to the game, has proven most useful as a half-back, doing a lot of honest work.”

Played Cricket and “fives” and was also involved in the entertainment at the school.

“Has learnt to play a thoroughly sound and scientific game as centre half-back.”

Fully involved in all the School activities as already mentioned plus Chess.

“The Rev C.W. Bennett was ordained Deacon on Sunday, June 8th, at the Parish Church, Berkhamstead, by the Bishop of S. Asaph, who was acting for the Bishop elect of St. Albans.  Mr Bennett will take occasional duty at Harpenden Church, and assist in parish work.

In 1891 Charles was ordained as priest at the Parish Church of St. Mary the Virgin, Saffron Walden by the Bishop of St. Albans.

His last recorded game was on the 28th November 1891 against West Herts.  He was still mentioned by the committee as late as January 1892 when injuries to Paul at half-back caused a selection problem.  He also played for St. Albans and the photo below is taken from their 1891/92 team photo. 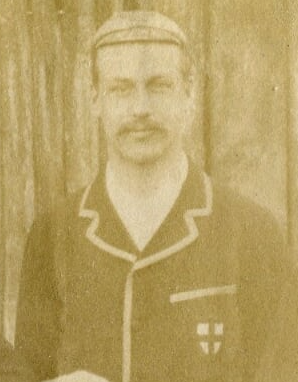 “The prizes were given away by the Head Master on Monday evening, December 19th.

He took the opportunity of bidding farewell to the Rev, C.W. Bennett, who has been a master in the School for four years, and said how deeply he, his colleagues, and the boys regretted his leaving, a regret which would be felt also by very many outside S. George’s, for he had so thoroughly identified himself with everything that went on both in and out of School.  He sincerely wished him all happiness and begged him to remember he would always have a hearty welcome from everyone, whenever he liked to come and pay them a visit at S. George’s.

The Rev C.W. Bennett is going for a year to help in the parish of S.Mary, S. George’s in the East, London, under the Rev. H. Henman, with the intention afterwards of being a Chaplain in the Navy.”

He became Rector at Woolstone, Gotherington, Gloucestershire from 1906 until 1932.  He married Mabel Annette Gordon on 20th April 1909. A quiet wedding owing to the death of the brides’ sister. She was given away by her brother Capt. Alex Gordon.