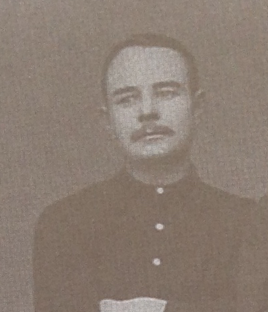 John was born in Little Chester, Derbyshire on the 18th October 1868.

The 1891 census shows he lived at 142 North Street with his wife Frances and son, Frederick (born 15th September 1889) who was one year old.  John was a Straw Hat Blocker.

John played for Luton Terriers before turning out for Luton Town reserves then stepping up to the first team against Millwall Athletic in March 1891.

“Is the gentleman whose features will be recognised in the above [sketch] but our artist hardly had a fair opportunity of doing the Luton custodian justice, inasmuch as Jack has inconsiderately cultivated a moustache since being focussed by the photographer.  “John “Jack” Burley began his football career around 1884-5 by playing for Park Rovers at centre half-back.  In fact it wasn’t until 1887-88 that he was tried as goalkeeper when playing for Luton Forest, for whom he played his first game against Wolverton L. & N.W.,finishing up on the losing side in the 3-1 scoreline.  For some reason he “rested” for three seasons before deciding to play football again (and that with local junior clubs) in 1890-91.

Towards the end of that season he was asked by the Town committee if he would like to play for them, an offer which he accepted.  His first game for the Town was against Millwall when Luton defeated the “dockers” 5-2.  Since then he has shown such excellent form that the committee had not thought it worth while to supersede him, and he has played regularly with the first eleven.

Always cool even under the hottest fire, he can always be relied upon to do his very best to uphold the honour of the club, and it will be within the recollection of our readers that he earned the warmest praise from the West Bromwich Albion, when they visited Luton, for the splendid manner in which he resisted their attacks.”

John played his last first team game for Luton on 19th November 1892 against Polytechnic in the English Cup.”  Luton lost 4 2 when they were expected to win.  John made two mistakes that cost goals and was dropped – Tom Read took his place.

“Proposed by Mr Hinson, seconded by Mr Austin that 14 days notice be given to Messrs F. Whitby and J. Burley to cease as players for the Town club carried unanimously”.

He did play once more as sub in a reserve game presumably stepping out of the crowd when the keeper did not turn up.

The club committee would deal with John one last time on the 28th March 1894.

The matter was discussed after which it was proposed by Mr Hinson, seconded by Mr Austin and carried unanimously that Mr Burley be not allowed on the ground during the remainder of the season , the Secretary to notify the Charity Committee of the same.”

By 1901, John was 32 and they had added Laura, Richard, John and Mabel to their family.  They were living at 23 Regent Street in Luton at this time.  By 1911 they lived at 12 Ash Road and Peter, Constance, Earnest and Thomas had been added to the clan.  Sadly, John was a drinker which caused him to appear before the magistrates a number of times and he separated from Frances and the children.  He was brought before the magistrates in August 1913 and fined.  There are many similar newspaper reports. In February 1914 John was fined 5/- by the magistrates for failing to send Constance to school.