George Deacon as recalled by his family

Many thanks to Carole Stroud for this wonderful account which has been handed down through the family.  I have produced it warts and all which is my duty to history.  The reference to, presumably, Asher Hucklesby the five times Mayor is interesting.  I have not been able to independently confirm whether this is correct but I feel it is important to share.  If anyone has any information they would like to add please let me know and I will happily publish.

“When George was about 14 years old, he had grown as tall as his father. In the family there were his mother and younger children, Arthur, Anne & Nancy (and may be others). His father seems to have made life difficult, drinking, bullying his mother and keeping the children frightened and hungry. One day it became too much for George and, anticipating a violent return at night, he stood behind the door and hit his father over the head as he entered. His mother insisted he should leave before he regained consciousness.

The parents of his father lived in Luton and were sad about their son’s behaviour, and accepted George to live with them. His grandfather was a builder and George worked with him. Several of the buildings at the lower end  of Wellington Street and Manchester Street have what they called “gingering” at the base of the exposed upright, which I was shown proudly be my mother, as their work. 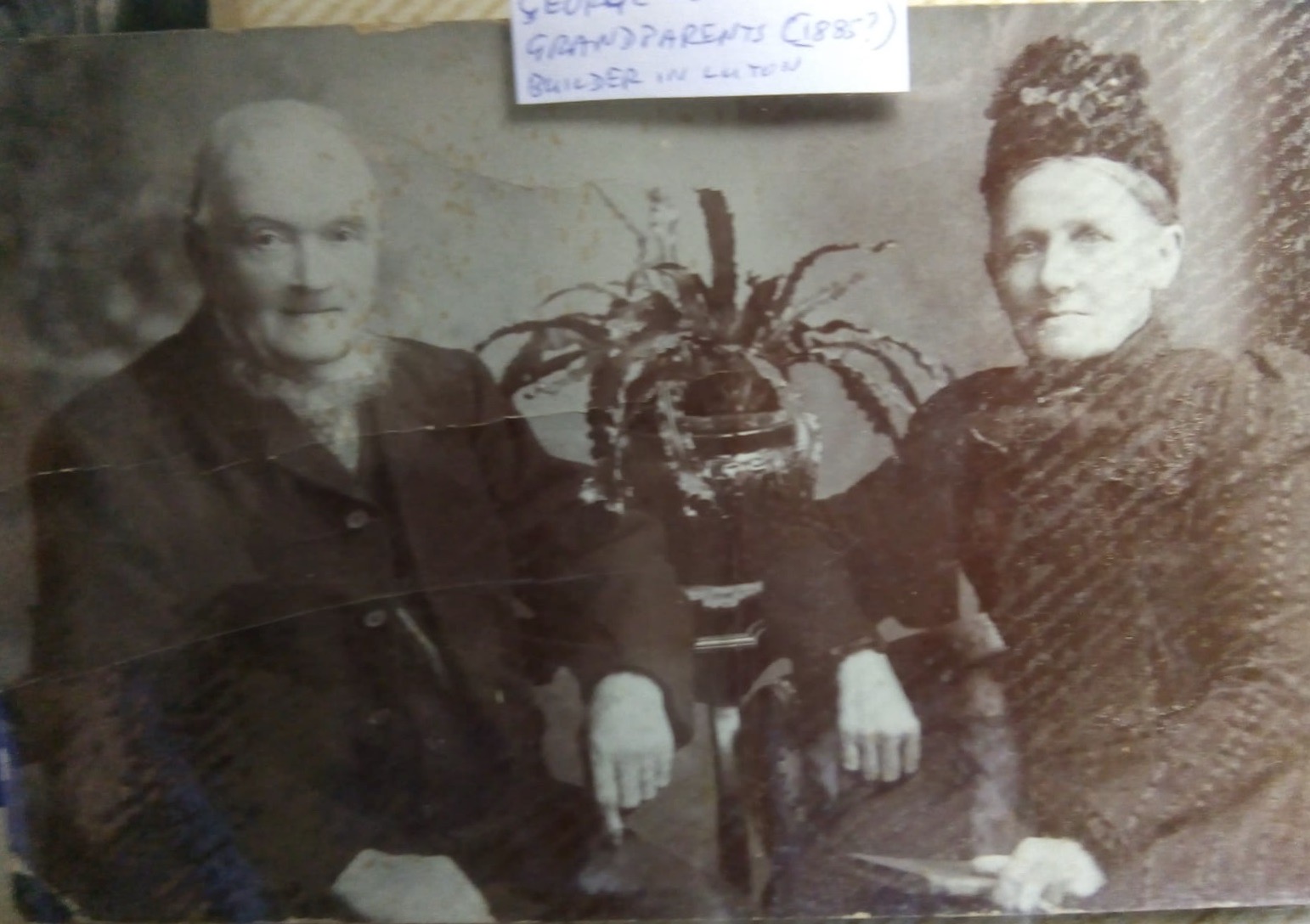 When George had his own children he vowed that they would never go hungry and there would be a whole guinea at the age of 21 for each child who had never touched alcohol. All of the children gained the guinea (wealth in those days!) When I knew Louis, he was an elderly man who had survived in the trenches of the First World War, and he had a drinking habit. Mum used to deliberately not have money when he accosted her in Pope’s Meadow, near where they lived, but would always give his wife, Annie, money when they met.

George taught himself to read by going to the library in Luton, none of my grandparents went to school, except my maternal grandmother. At some point he learnt to play the fiddle and accordion. He married Emma when they were both quite young, and had a child every 18 months or so- George, Sydney (who had what I think from descriptions, had hydrocephalus and died in infancy, George recounted this as a heartbreak), Louis, Ernest, Maud, Jessica, Beatrice, Olive and Albert. At this point two disasters, Emma’s kidneys gave up and she died from dropsy.  The second was that the hat company which he had built up as a family firm met a large order for straw boaters from a local exporter to the colonies, Mr Hucklesby.  However, the order was cancelled at the last minute, leaving a year of inability to sell them, till the next season – this drove George into bankruptcy in 1889.  This man had done the same to others. (When I started school I had his daughter, then very elderly, as my teacher at Stopsley and my Dad had to be persuaded to let me be taught by her!) 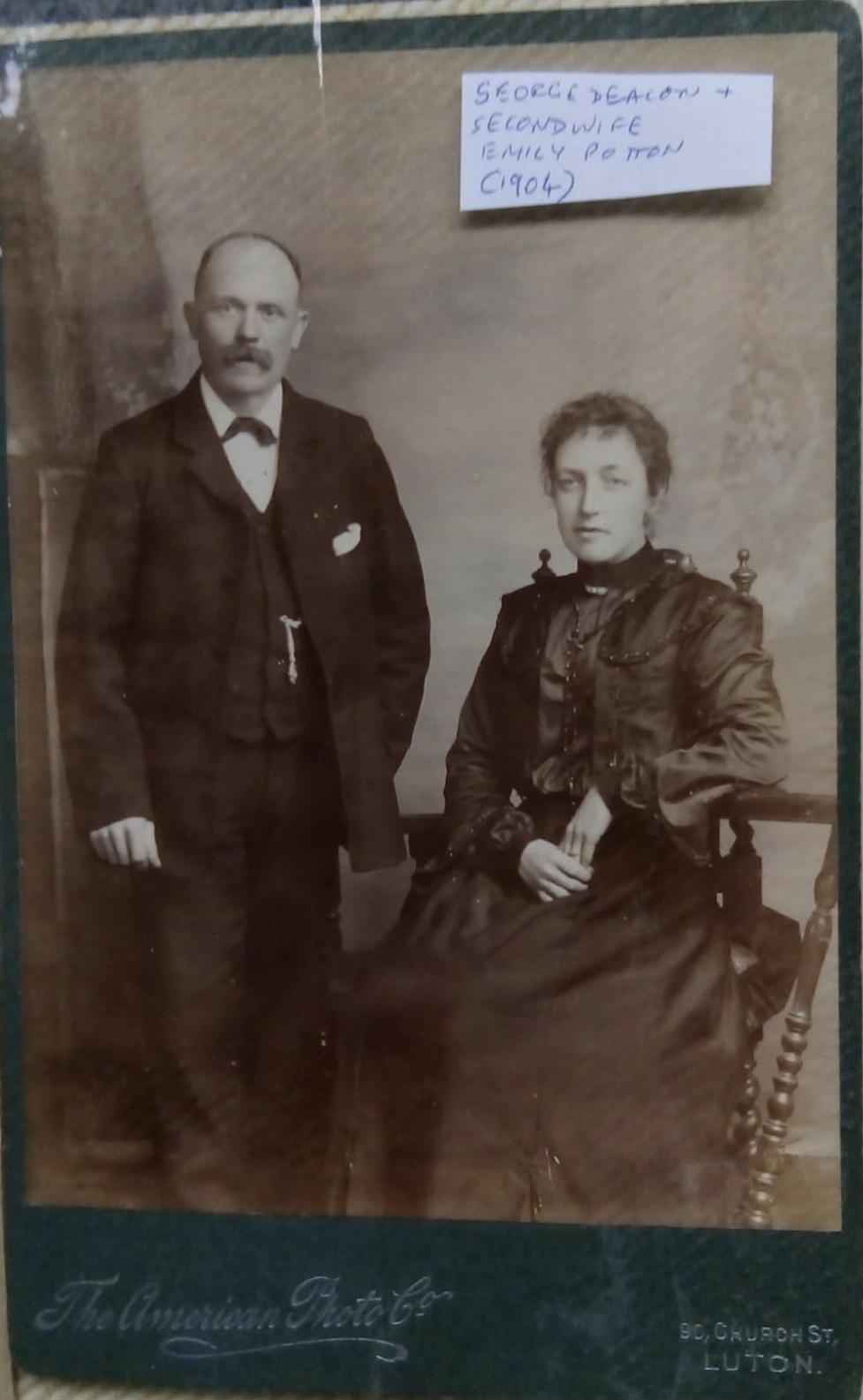 He moved the family to a rented terrace in Jubilee Street, off High Town Road, which at that stage was run down and regarded as a bad area. Olive was sent to stay with George’s sister Nancy and her husband, Charlie. They had no children and were well off and spoilt her, already a determined child. Beatrice was sent to Aunty Anne, the other sister, and joined a big unruly family with strict paternal discipline. She was slightly deaf (measles?) and very timid and withdrew from the shock of it all. Maud was almost 12 and passed the labour exam staying at home to look after baby Albert and run the house.

Some months after this, George had gathered his children up and taken them to one of the many village fetes, where he often won a silver (plated!) spoon, or pot, and a young woman, Emily was there and noticed him jump over a bar and then walk under it. She, being an observant person, watched him with his little children and was filled with compassion for the little ones and admiration of his attempts to care for them.  She enquired after his situation and gradually, I suspect not with romantic passion as they were not young, she became involved and loved them all.

My mother remembers that when times were hard, George would take a piece of bread and a small piece of cheese to work, so that the men would see he had lunch, but each day he returned with the cheese uneaten until Friday, when they could eat it in the family. He worked various odd jobs, steward at the Liberal club, during the war travelling on the milk train to London to work in supplies to the forces.

The influenza epidemic after the war caused grief, Emily almost died as she suffered from asthma. My Mum, Elsie went to stay with her maternal aunt, Kitty, (for whom she had been named Elsie Kate) Nellie (Ellen Clara) went to another aunt, Albert, just home, died in Papworth, Jessica whose fiancé had been an officer and had died in the war, also died. My mother remembers each day a wooden trolley rumbling over the cobbles of Wellington Street, where they now lived, to collect the bodies each day. They put straw on the cobbles so that those very ill would not be aware of what was happening.

When my parents married, George and Nellie moved in with them because George only had 10 shillings a week pension, and they would not be financially able to stay in Wellington Street. Emily had died three years earlier. He looked after my brother when, due to the depression, my Dad had no regular work and so Mum went back to millinery with Brown’s. he died in 1944, 10 months before I was born!”

Below is a photo of George and his brother Arthur taken in the 1930’s. 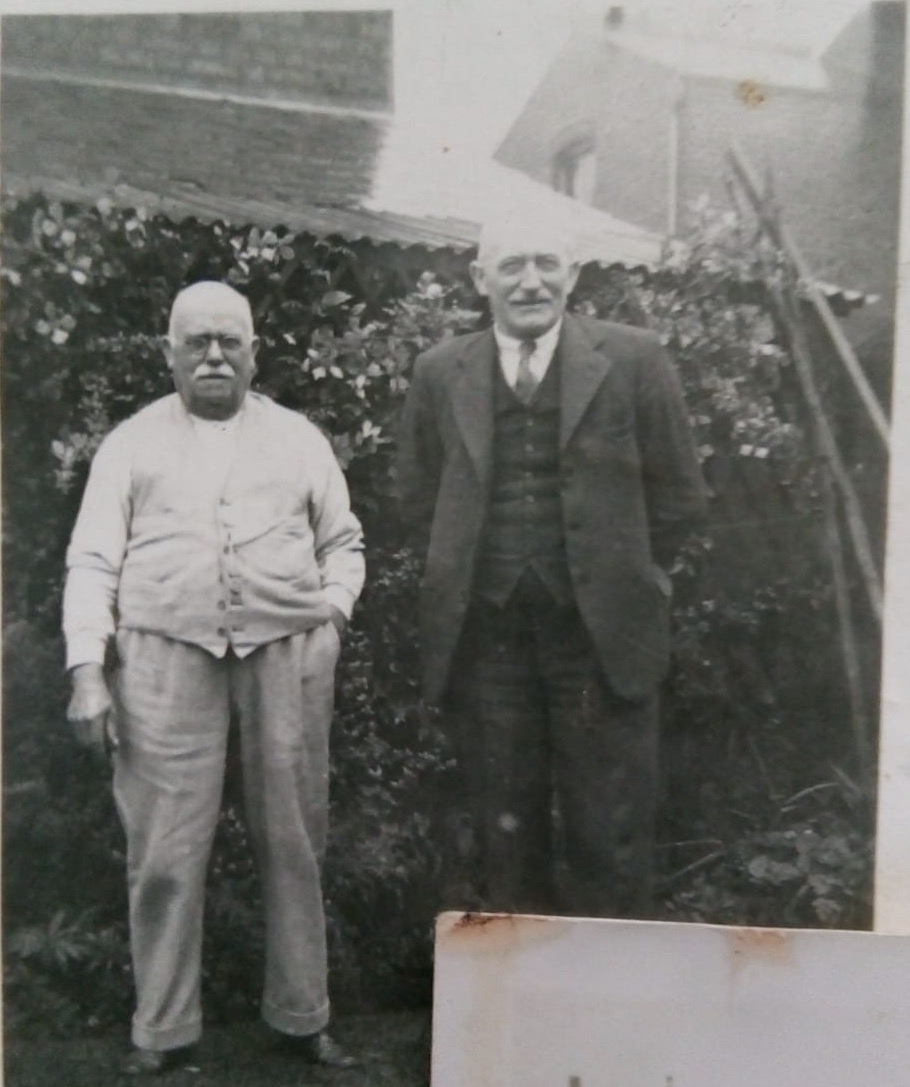