I thought I would share some general photographs of individuals, smaller and unknown teams with you.  It will give an idea of what many lads and local teams wore when playing in the park. 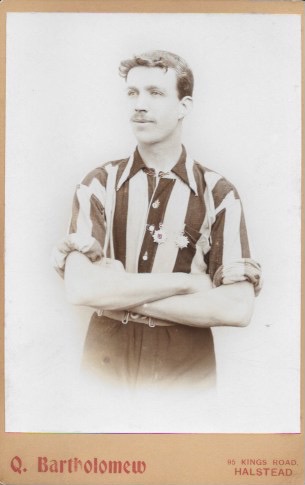 I purchased the above photo of an unknown player.  I have since identified him to be William Gracey Ford – see Hall of Fame.   A glimpse of the snake belt which were popular.  He wears two medals. 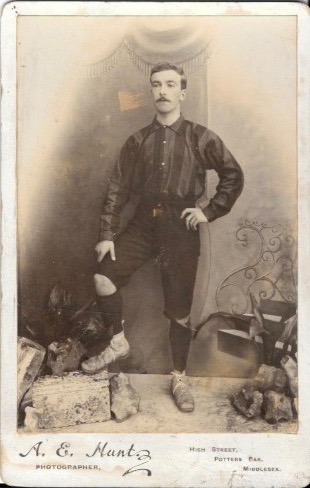 This players shirt looks brand new so an immediate visit to the photographers was a natural thing to do.  Note the rugged set around him. 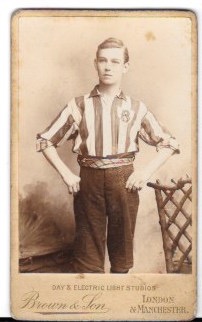 This Carte de Visite shows a young man in his shirt with badge.  He appears to be wearing plus fours, not proper football shorts.  Snake belts were popular and available in club colours.  A school tie was sometime worn instead, as in this example. 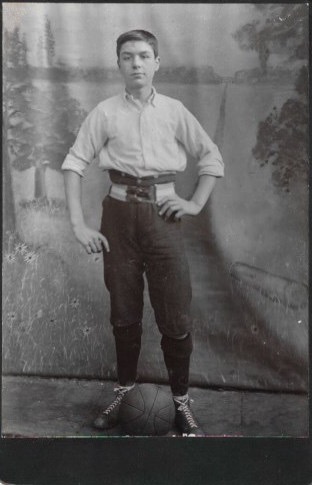 This young man appears to be wearing a military belt and a working shirt.  Compare his belt with that of Arthur H. Taylor in the Luton Town Players gallery. 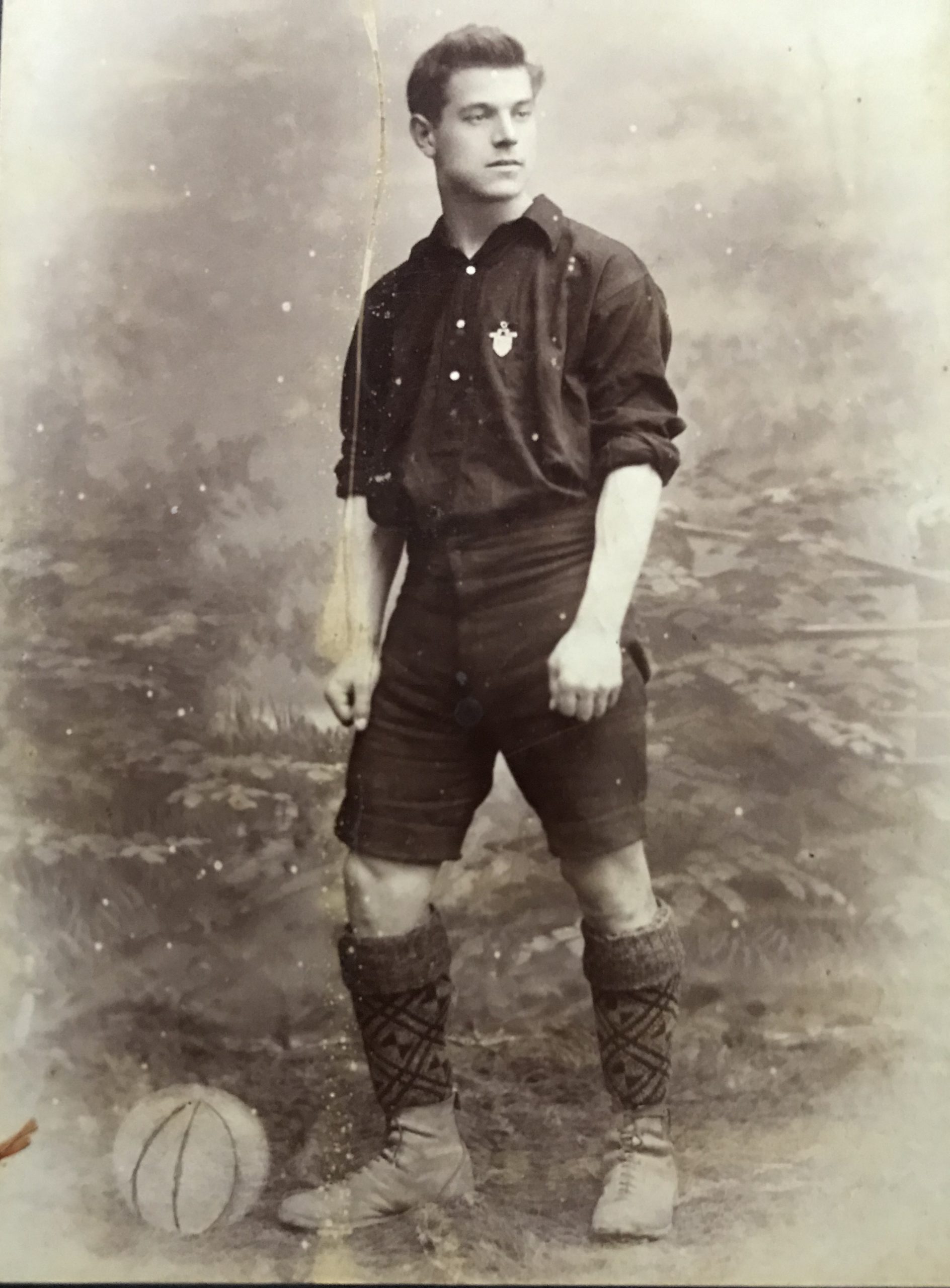 Possibly Edwardian era but a nice photo and medal. 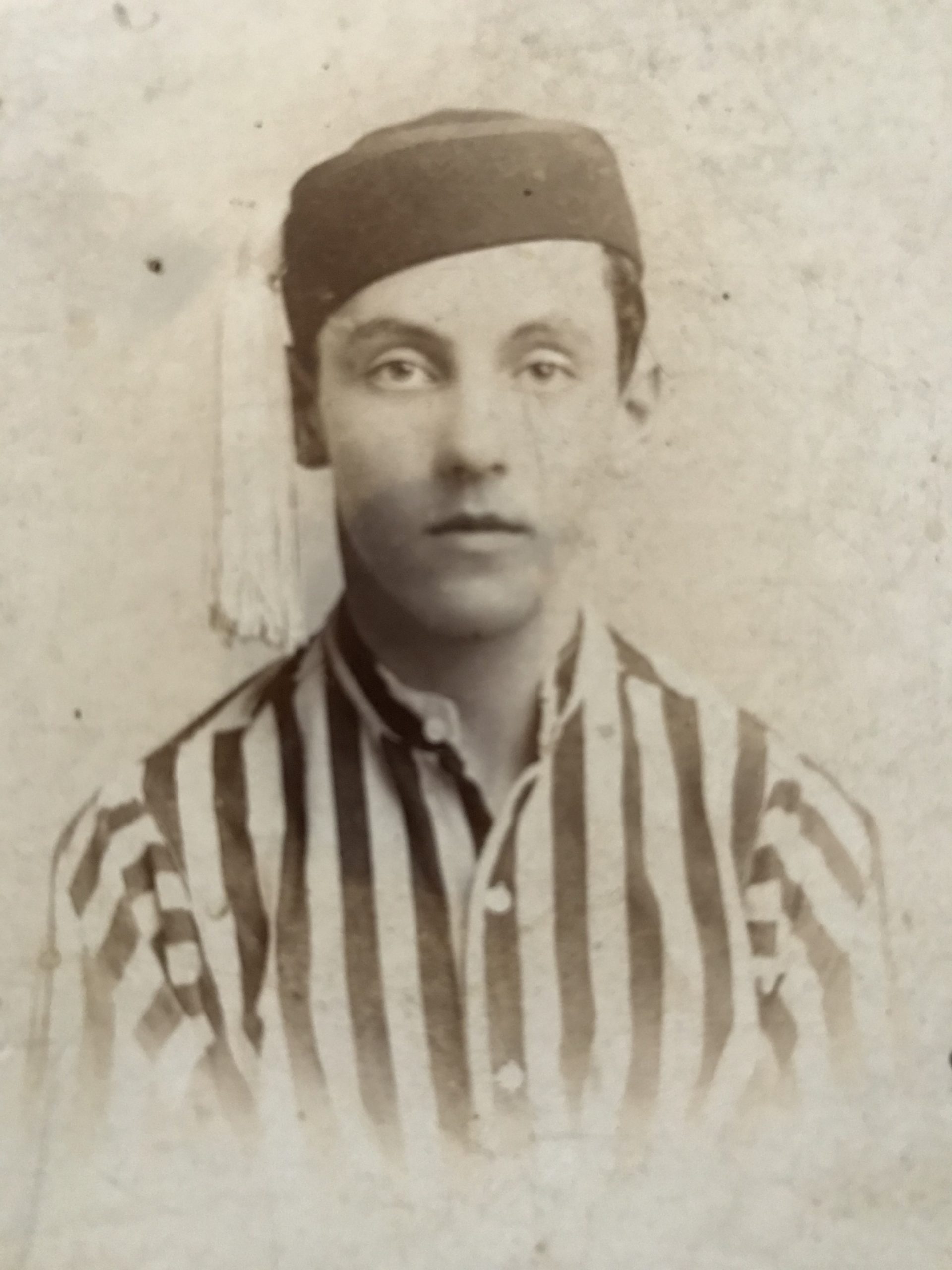 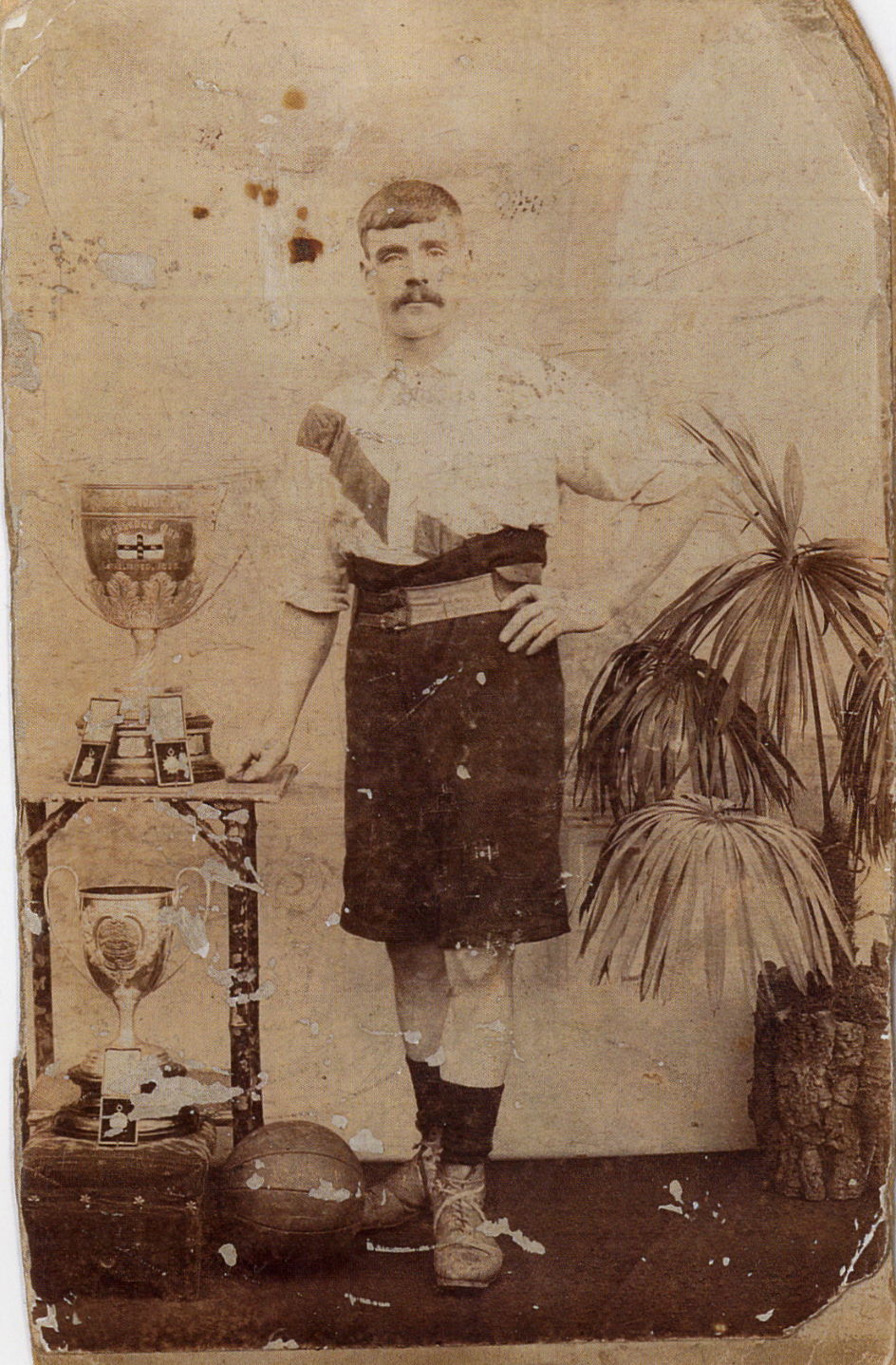 The above player is William Henry Edwards.  There is a good view of his stable belt which was of quite common in the 1880’s. 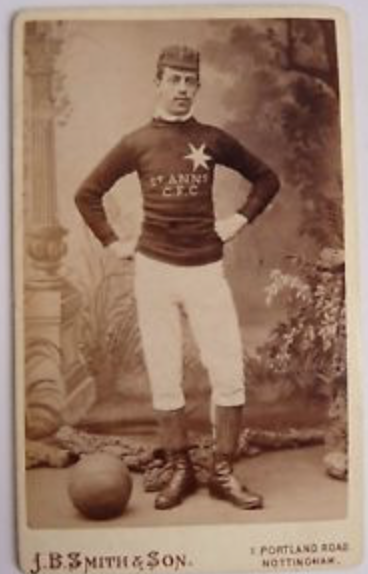 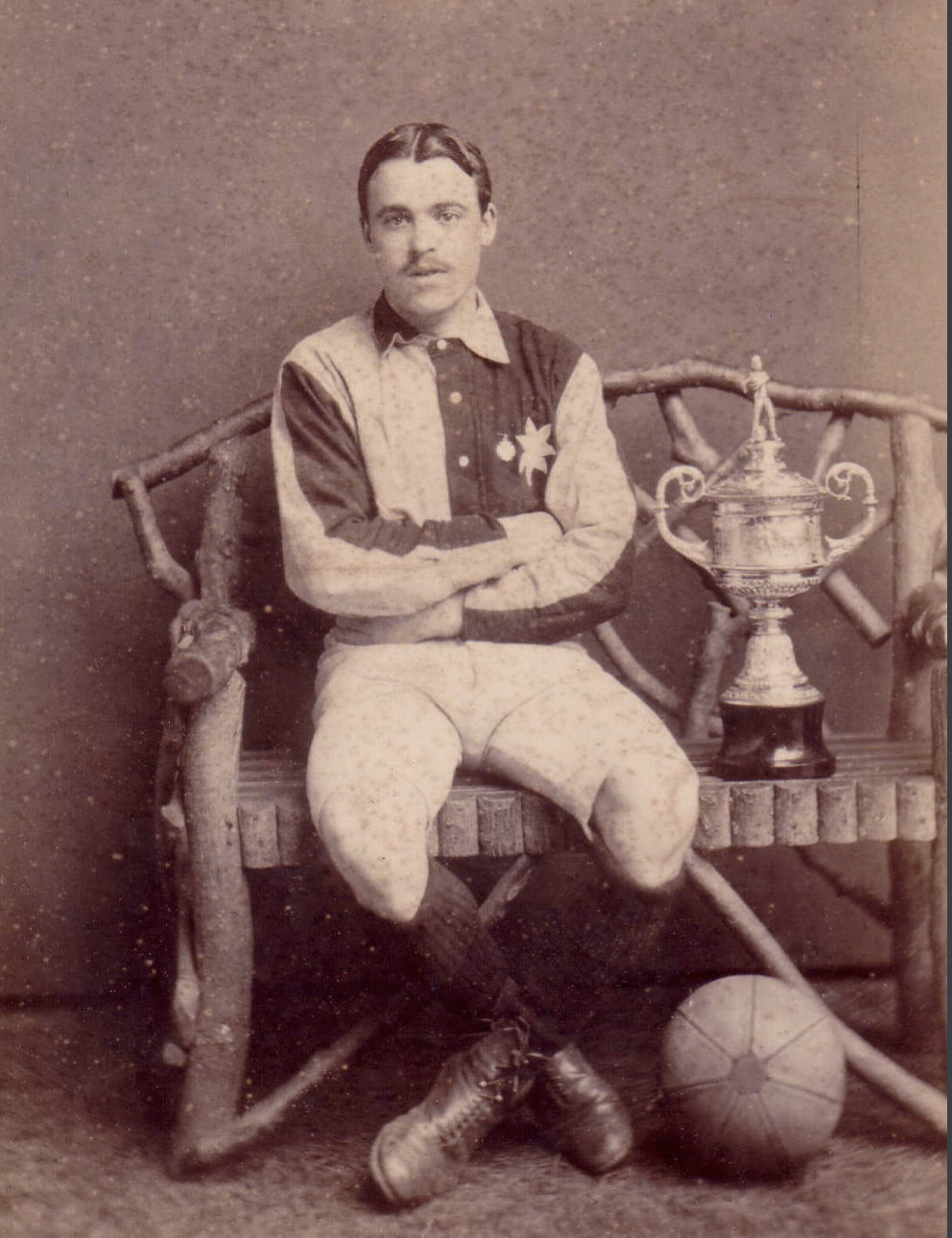 This is Frank Moores (born 1871) from the Isle of Wight with 8 pointed star badge, medal and cup. 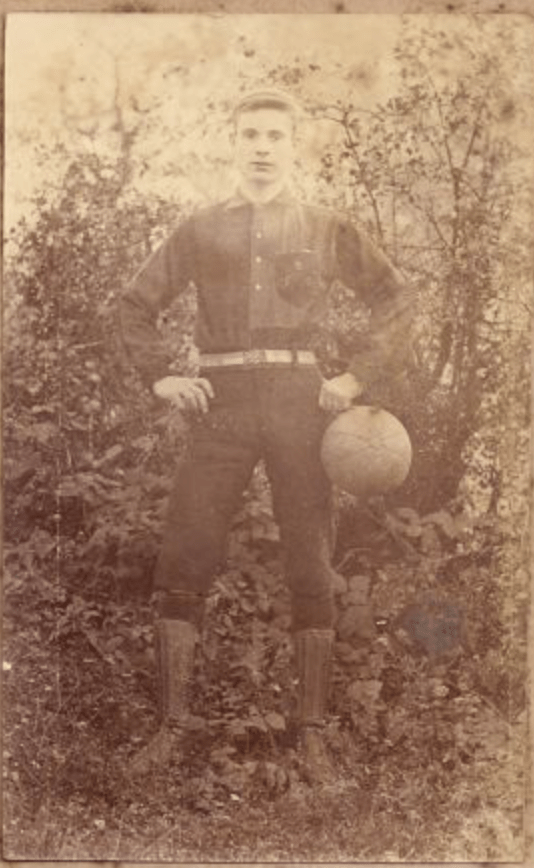 This young man is fully kitted out with shin pads, long shorts, snake belt and shirt with a “BFC” badge. 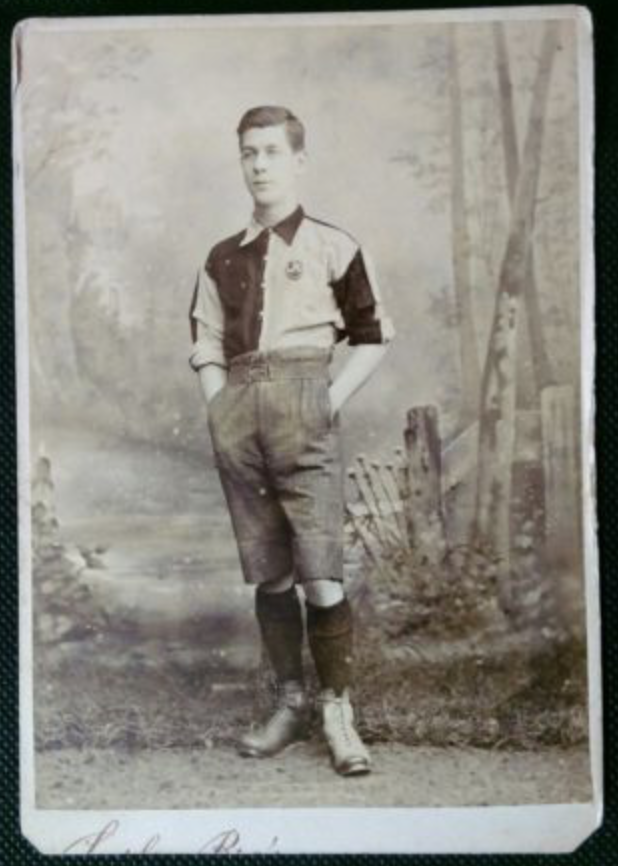 A nice confident, casual pose so a captain possibly. 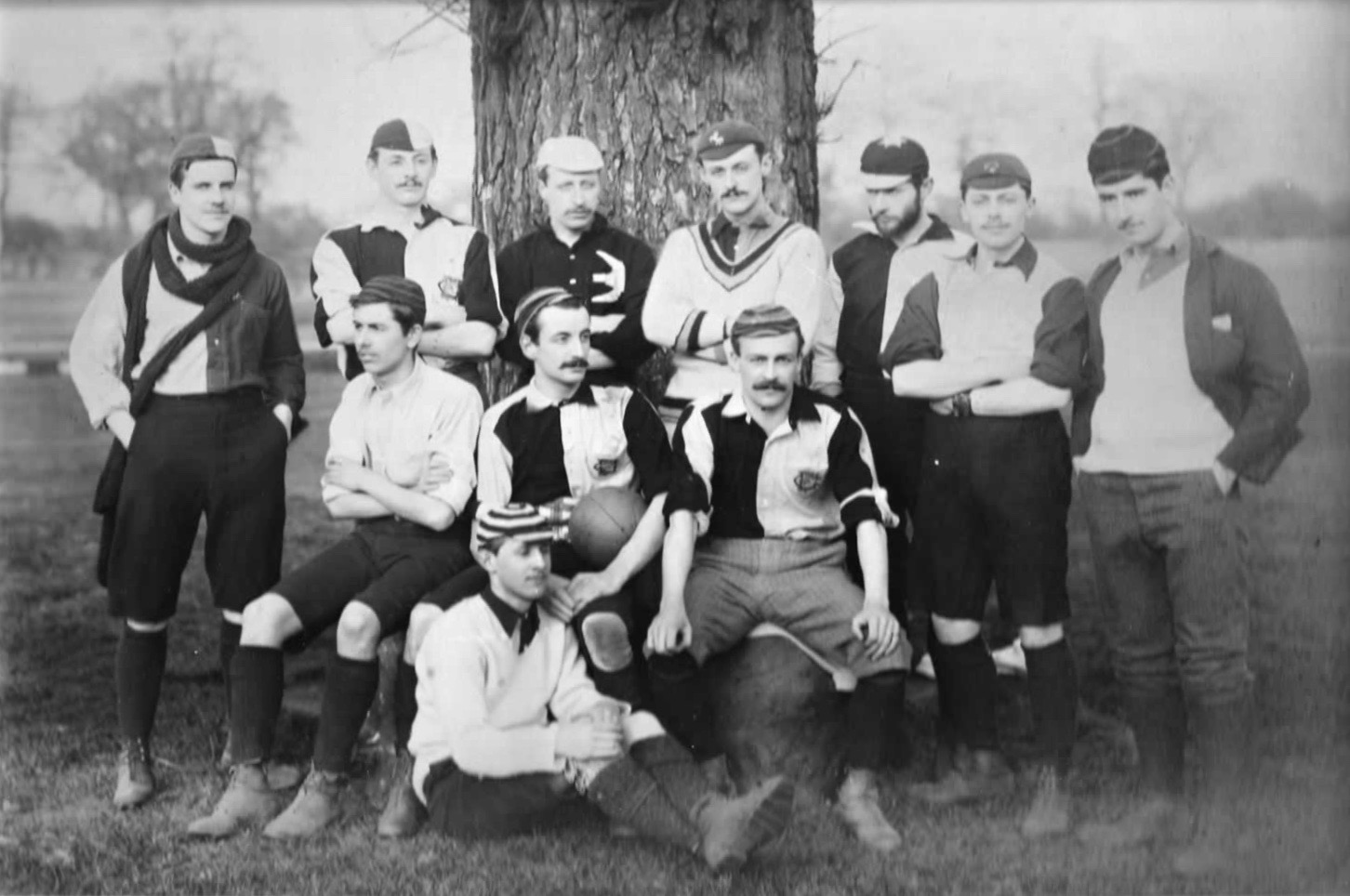 Thanks are due to historicalkits.co.uk and to John Crawford for this photo from the early 1880’s.  John’s relation is Algernon Haskett-Smith who is standing second left.  The photo was probably taken in Goudhurst, Kent.  The photo shows a variety of kit typical of a group of (quite wealthy) friends meeting in the park for a game.  The shirts with badges may be from Oxford University.  The badge is a monogram type which was popular at the time but does not help us interpret the initials. 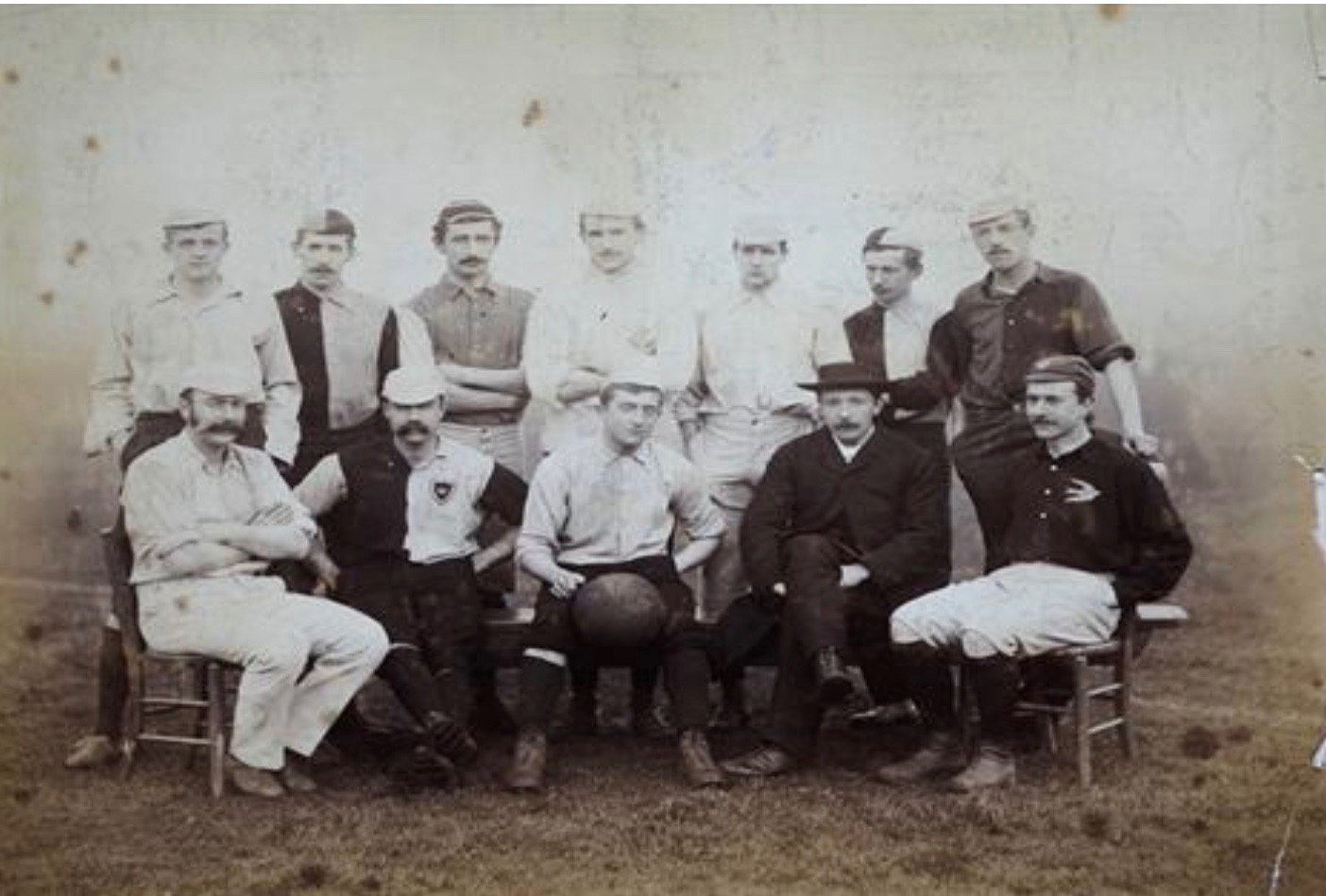 Photo of a group of footballers mid 1880’s in various kits.  Dr Tinsley Lindsey (second left, back row) wears Trinity Hall Cambridge colours.  Note the player sitting right with the Swift on his shirt.  Compare that to the photo above – player back row with black shirt with three white “fingers” on.  Another Swift?  During my research I have found that “Swifts” was used by many clubs  – Bedford Swifts, Burton Swifts, Swifts (Slough), Notts Swifts, Walsall Swifts, Caledonian Swifts, Luton Swifts and Cambridge Swifts. 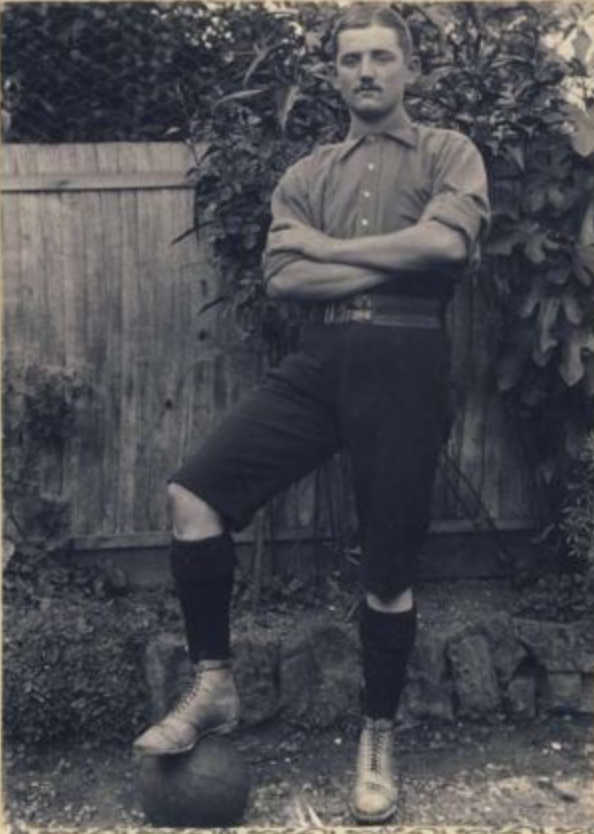 This unidentified player poses in typical kit, possibly taken in the photographers garden. 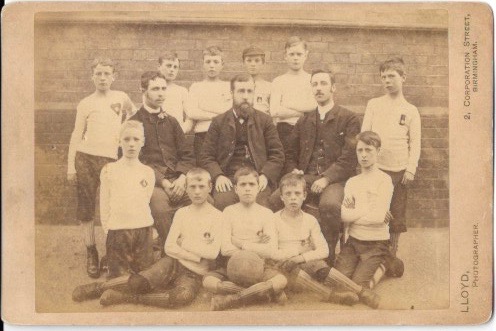 The young took up football in huge numbers.  The above photo shows a Birmingham school team posing after winning a medal. 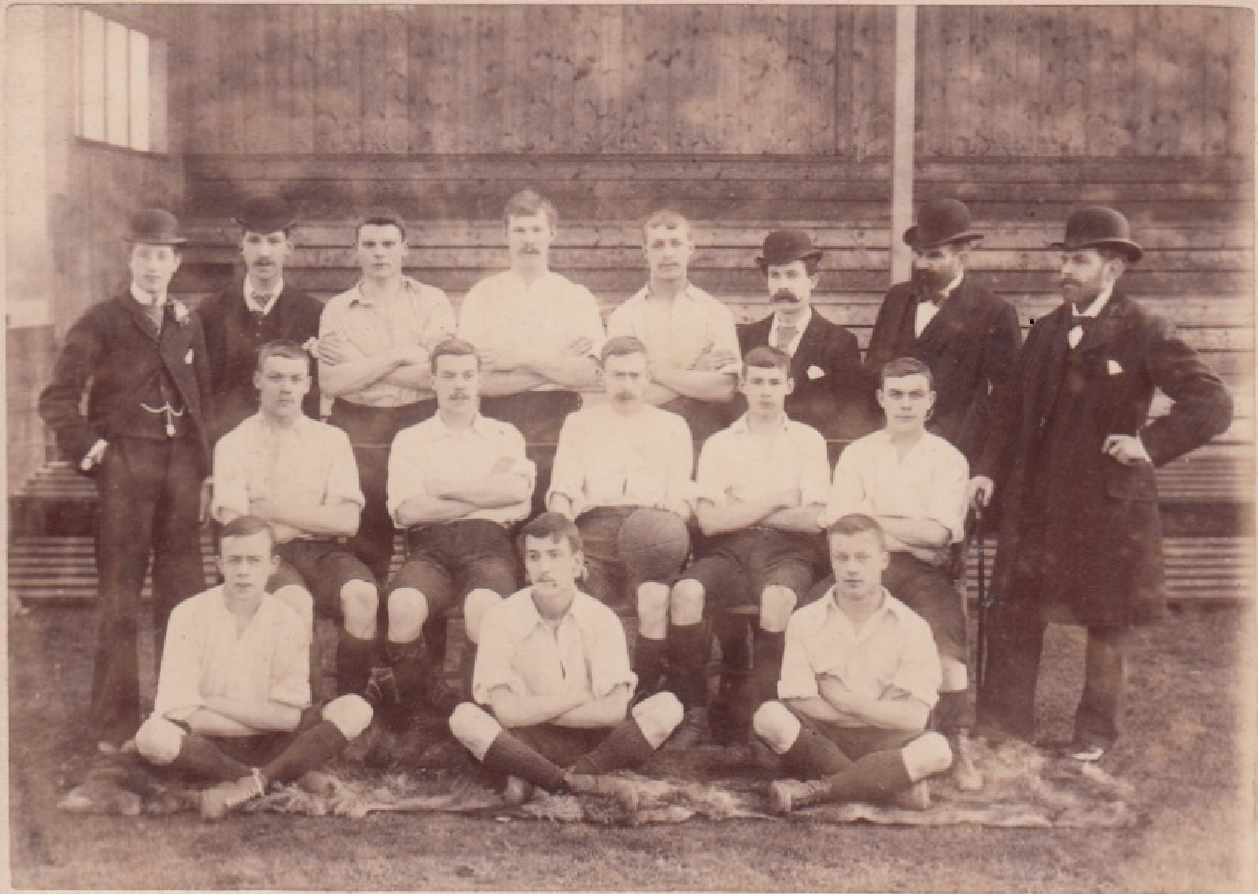 This is an unknown Wellingborough team. 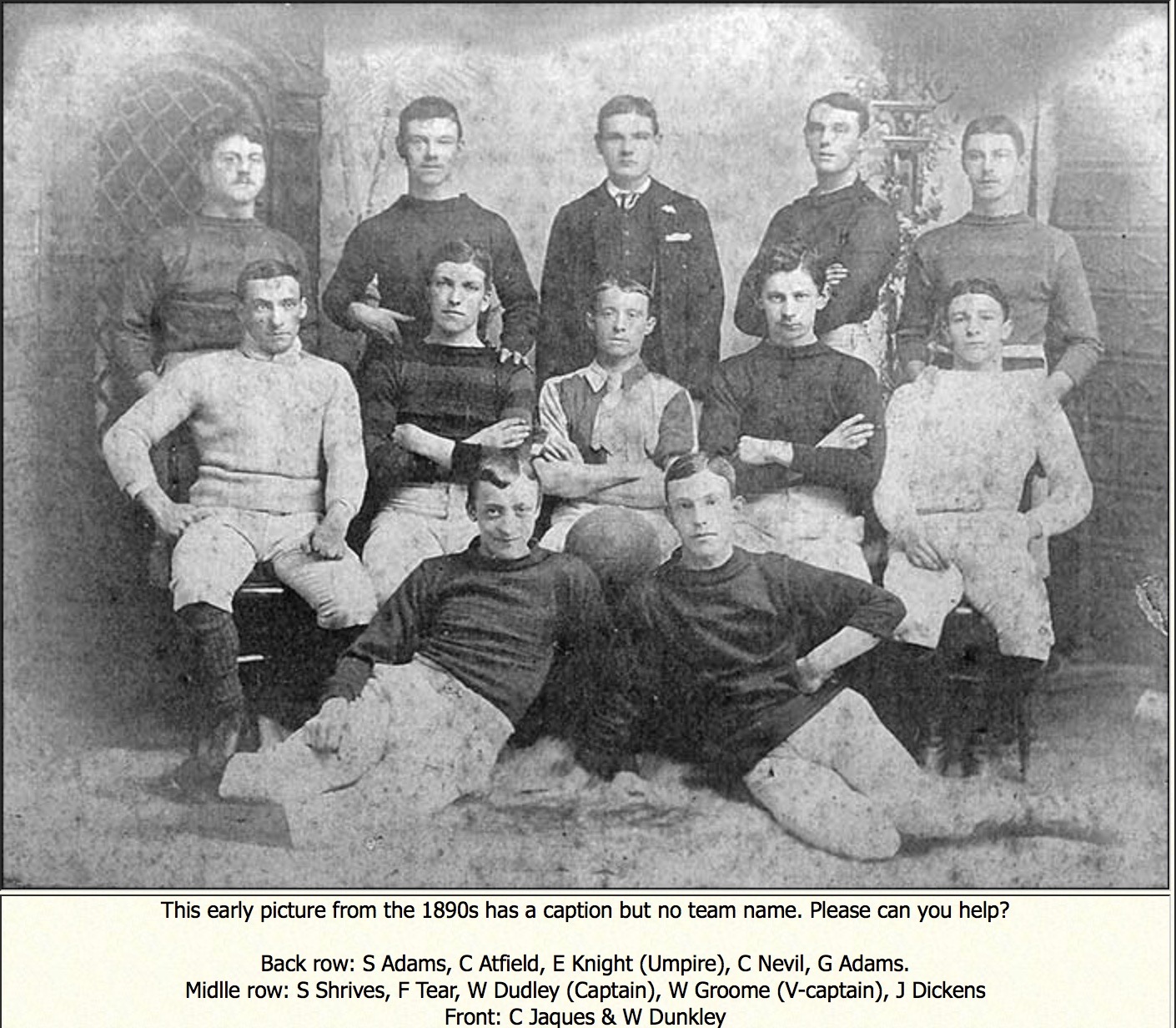 Another unknown team but it should be possible to identify them by the names.  Thanks to Rushden Museum 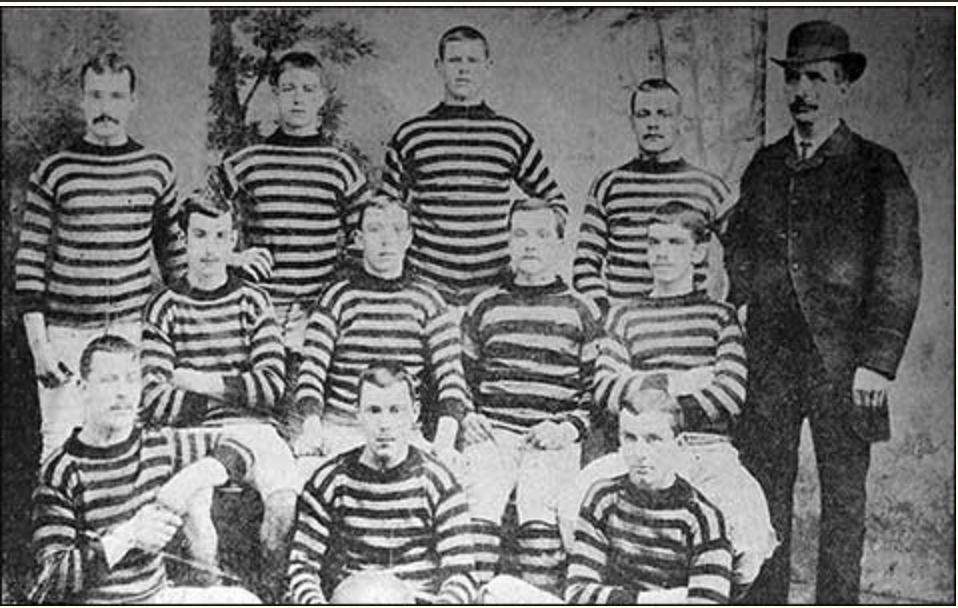 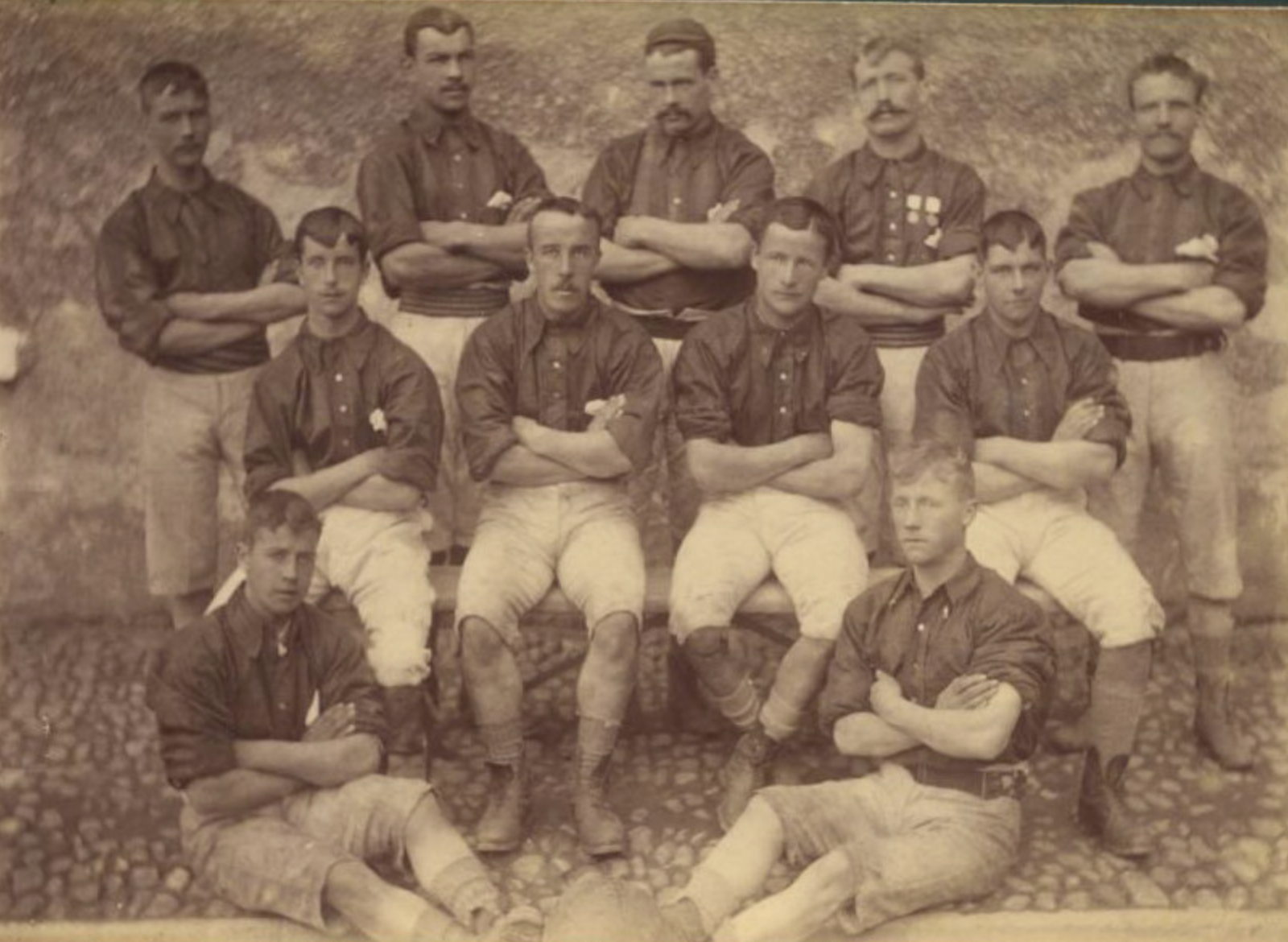 One of my favourite photos.  This unknown team look like a typical working class group of lads. 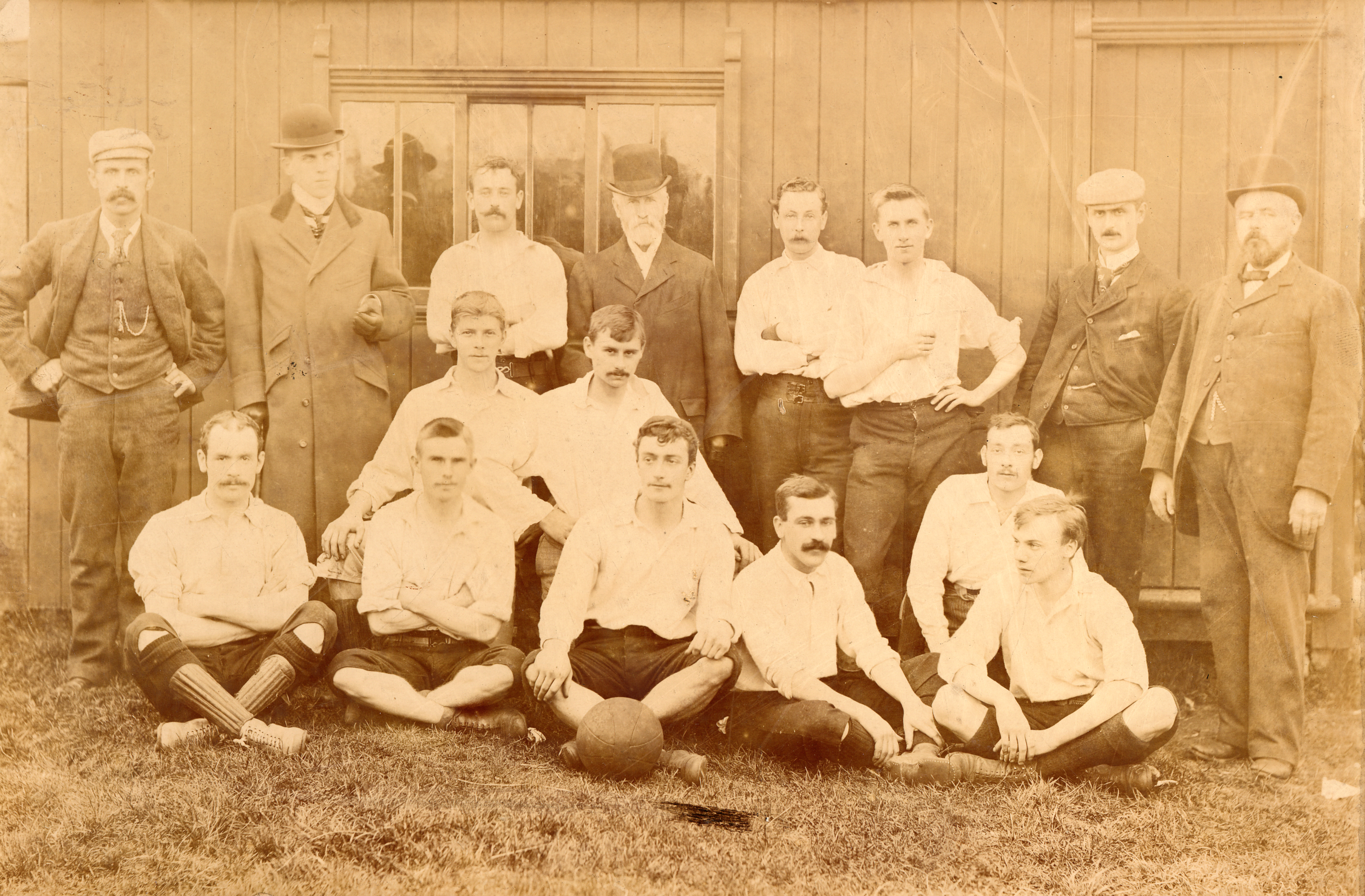 Another unknown team said to be taken around 1899. 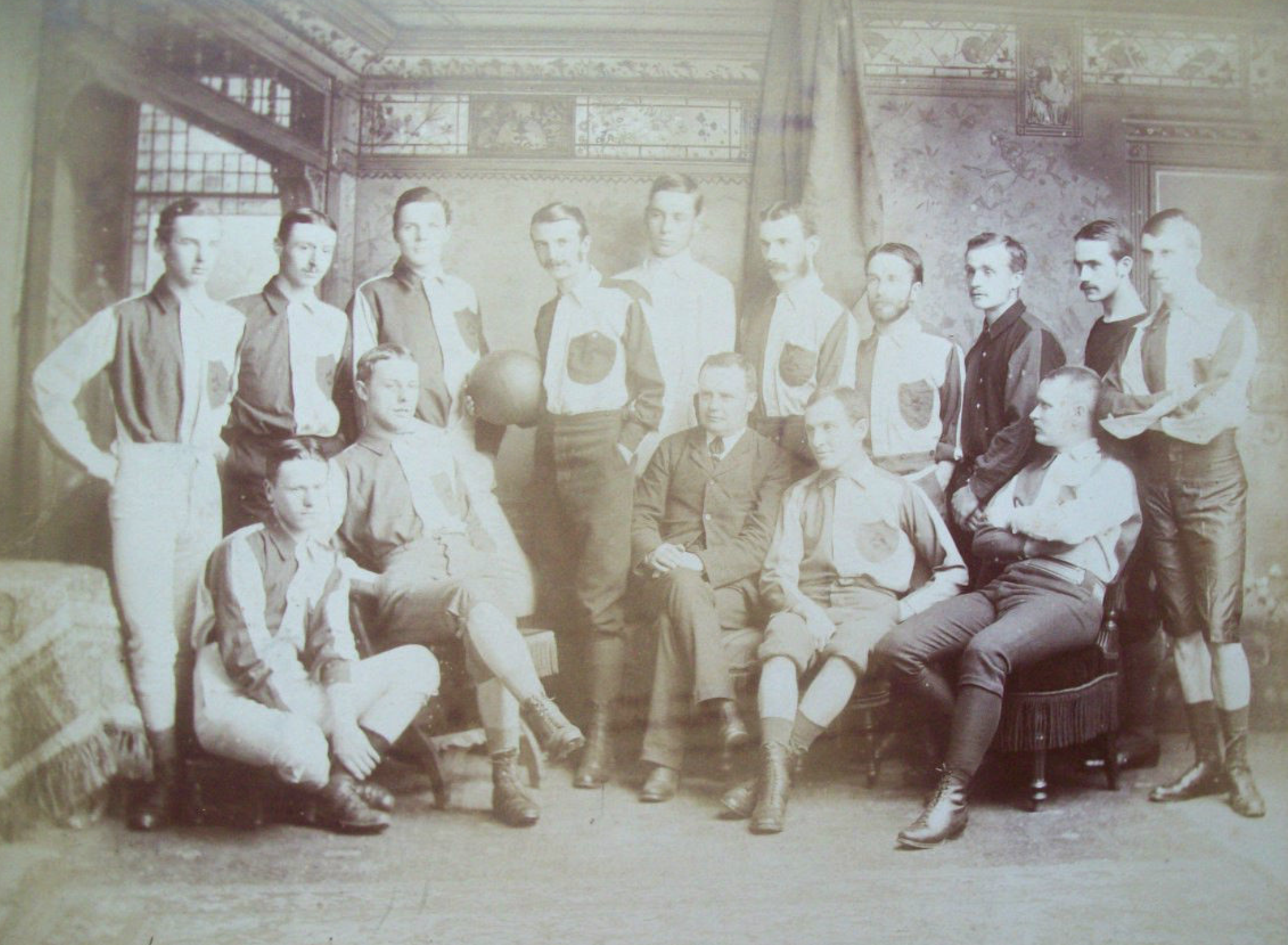 An unknown team in plush surroundings 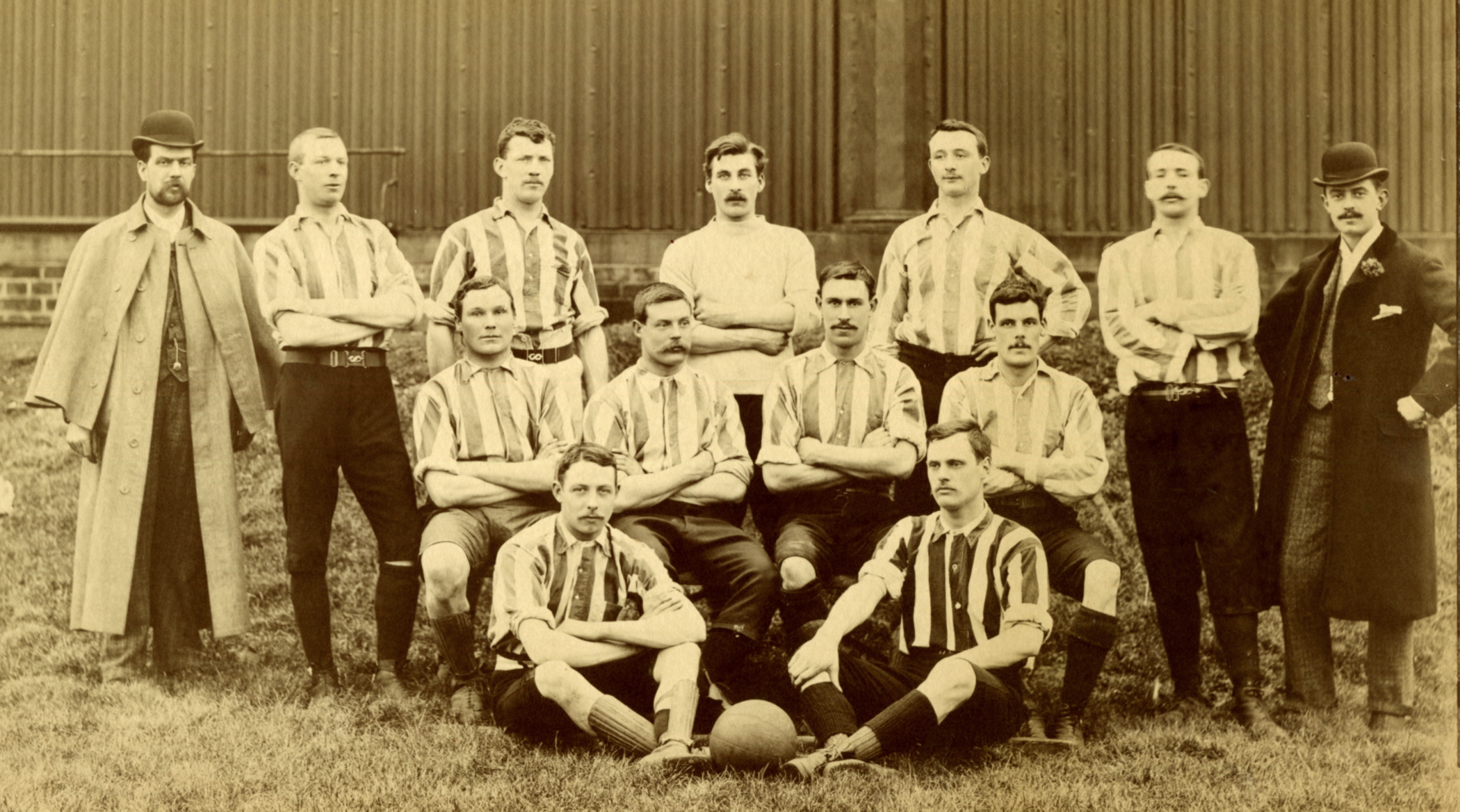 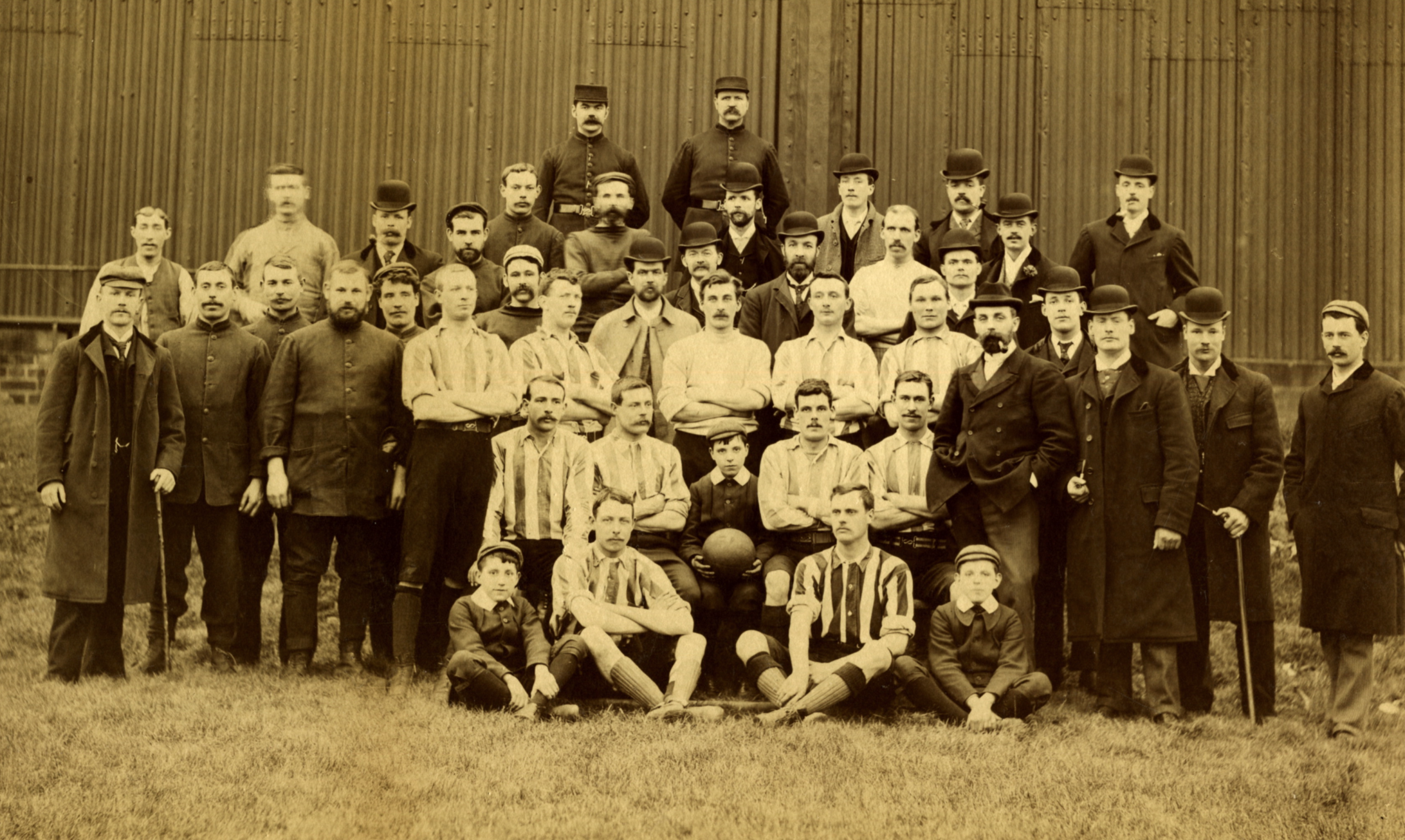 Two photos of the same team, the second with many hangers-on. 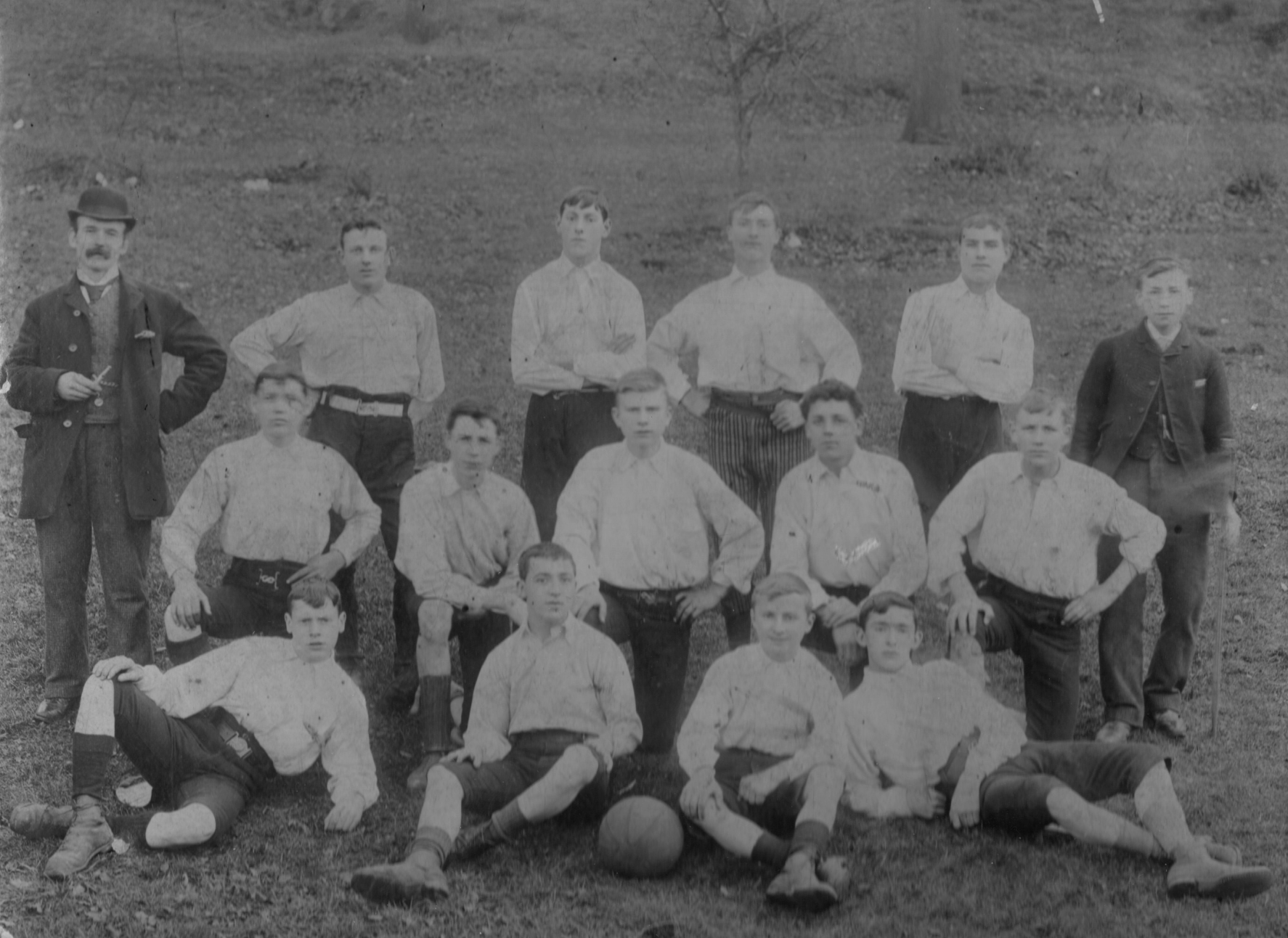 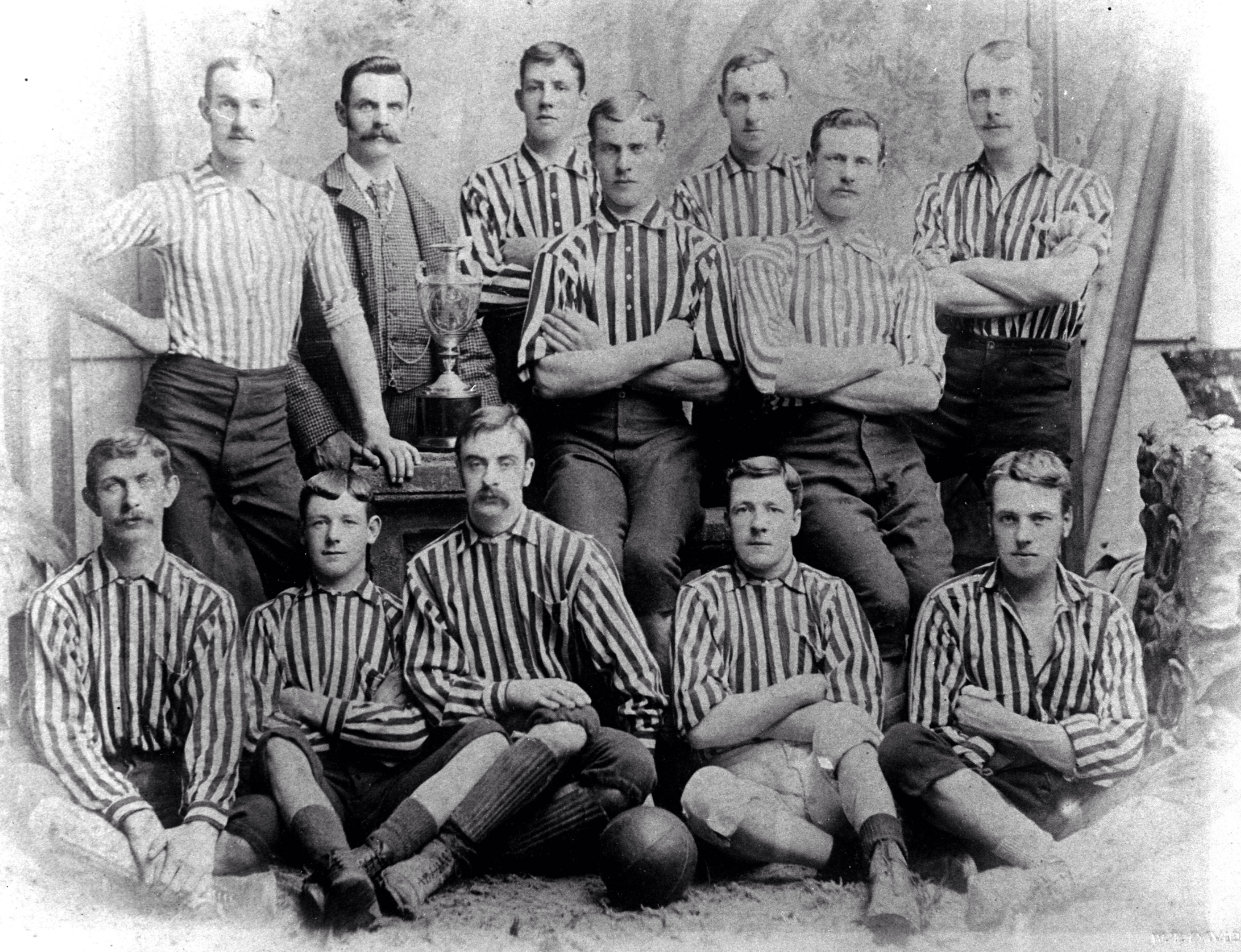 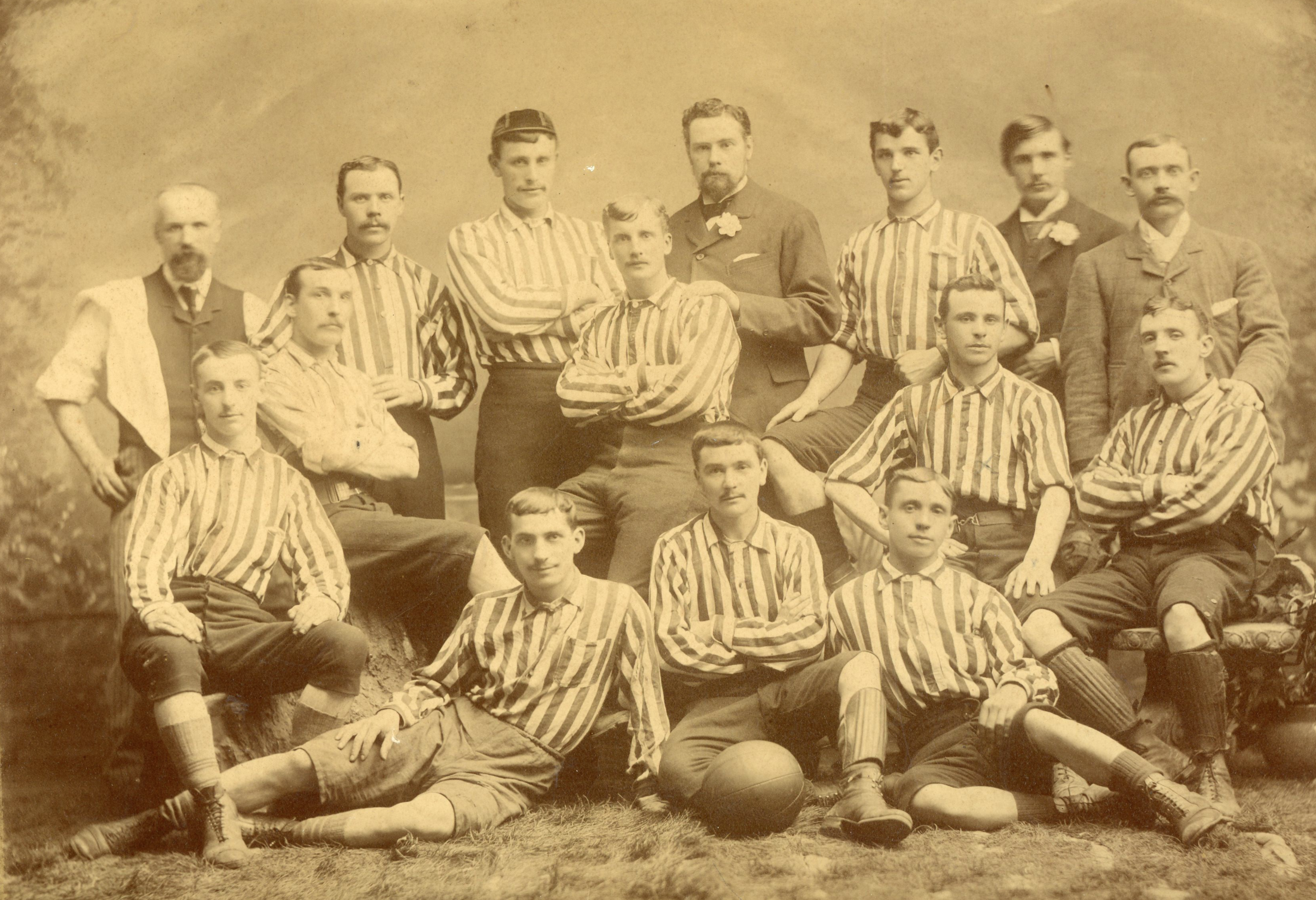 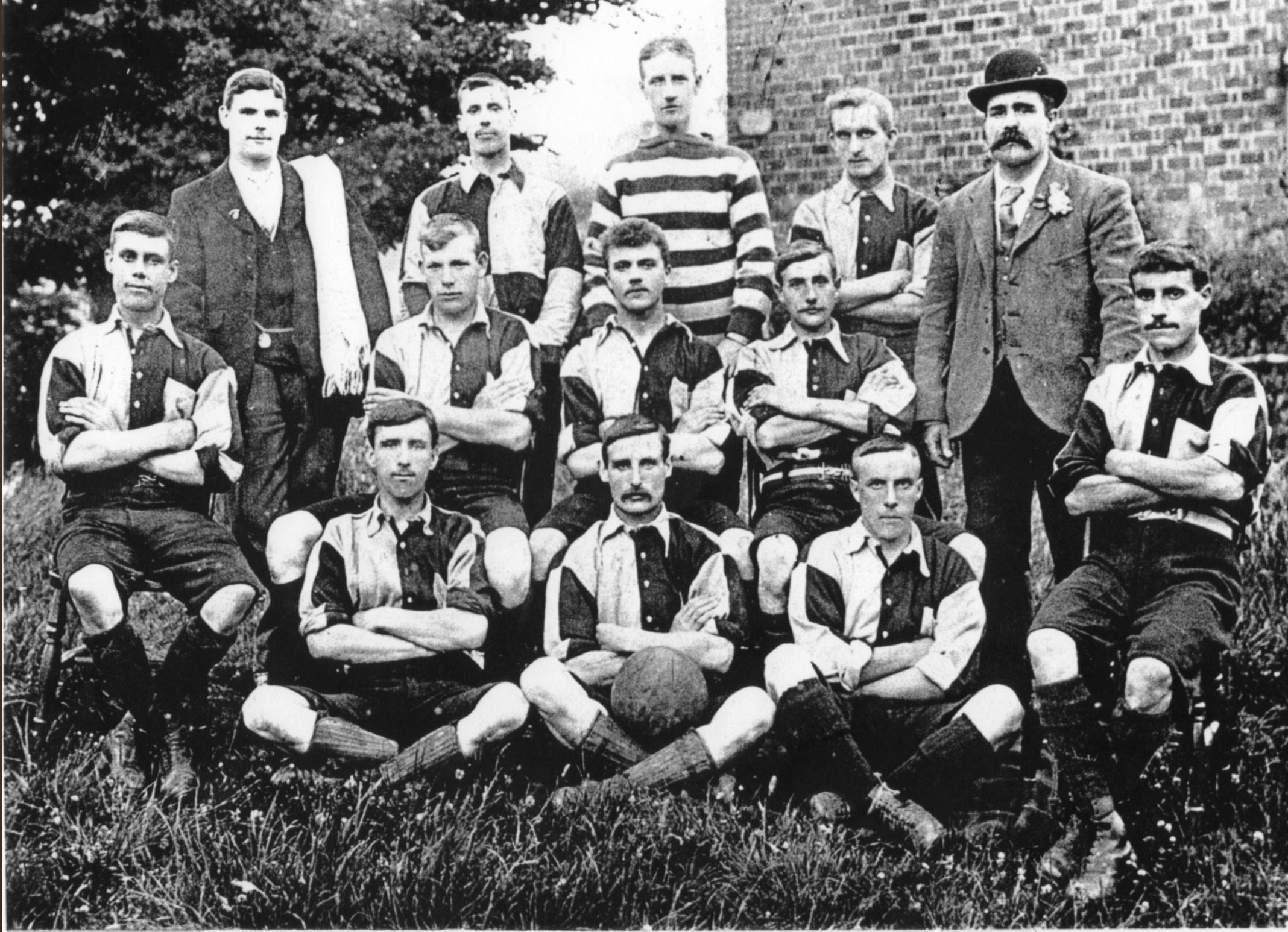 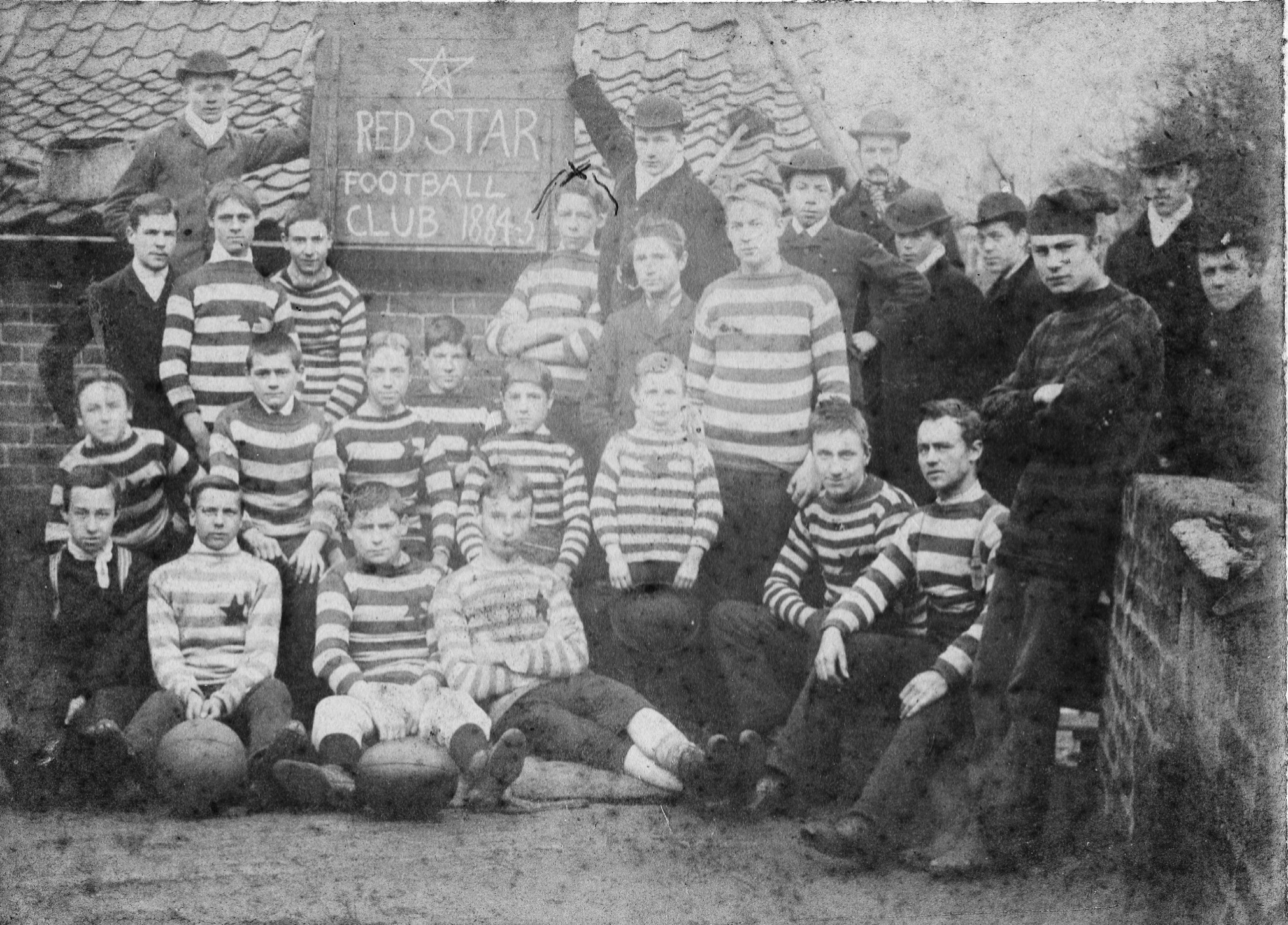 Red Star, Beccles.  Round and oval balls.  The player on the right looks like he is wearing a Royal Engineers shirt and cap. 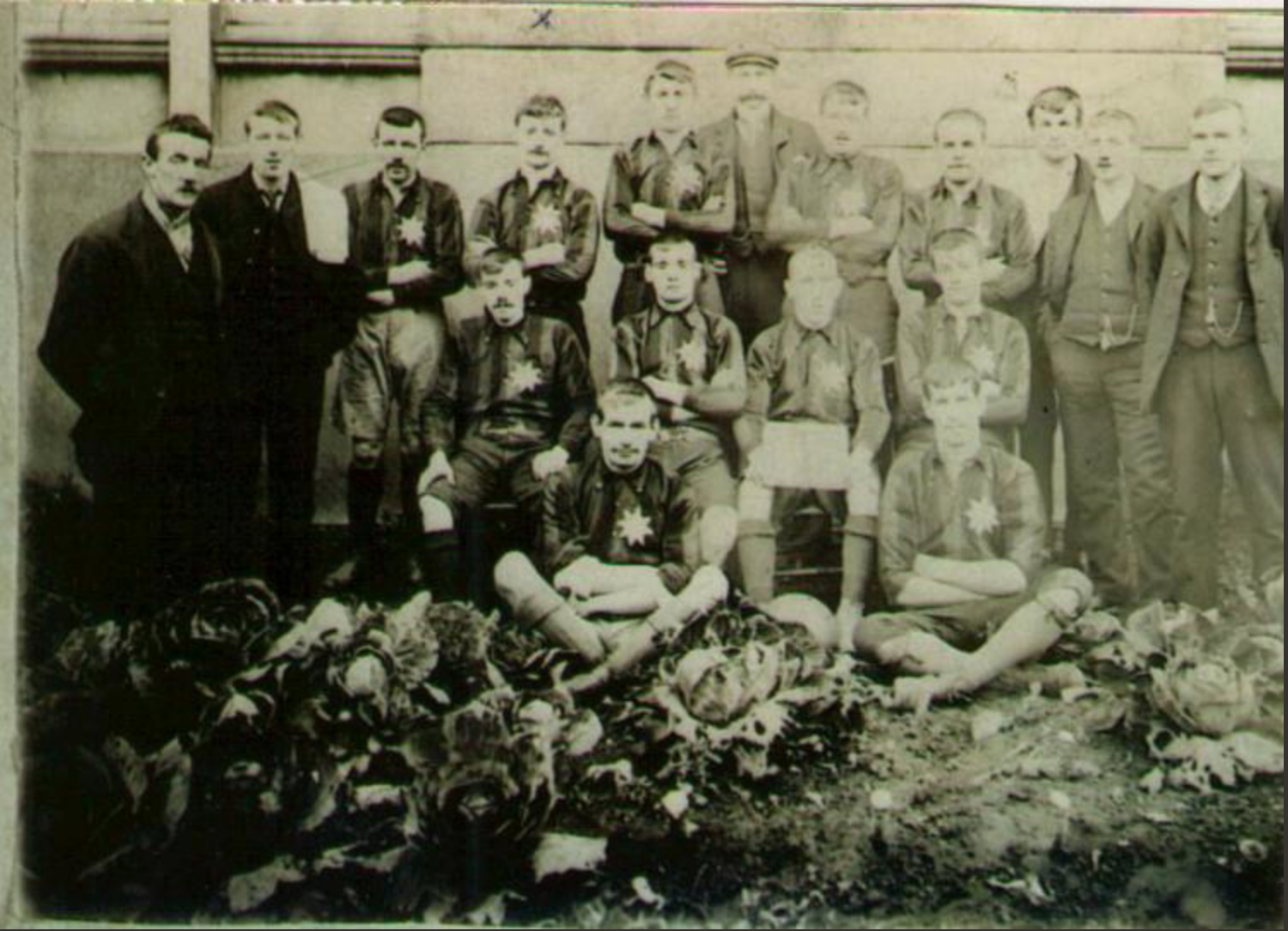 Whitestars of Whitehaven wearing the same 8 pointed star as the Straw Plaiters did from 1892 to 1896.  The cabbages were an early form of mascot…….ahem.