I discovered at Wardown Park Museum the oldest known team photo, below, from the 1889/90 season.  Obtaining an exact date for the photo has been difficult because none of the team line-ups in the newspapers match the men in the photograph.

In order to date the photograph I took into account a number of factors.  The players have red shirts so it was taken after September 1889.  E.H. Lomax played his last reported game on 4th October 1890.  The forward line during the 1889/90 season was fairly consistent with the Whitby’s, J.C. Lomax, Deacon and Miller making up the front five – all of whom are in this photo.   Thomas Read is the goalkeeper wearing the same kit as the outfield players.  The photo was highly likely to have been taken before the first Kettering Charity Cup Final match aginst Grantham Rovers on the 22nd March 1890. 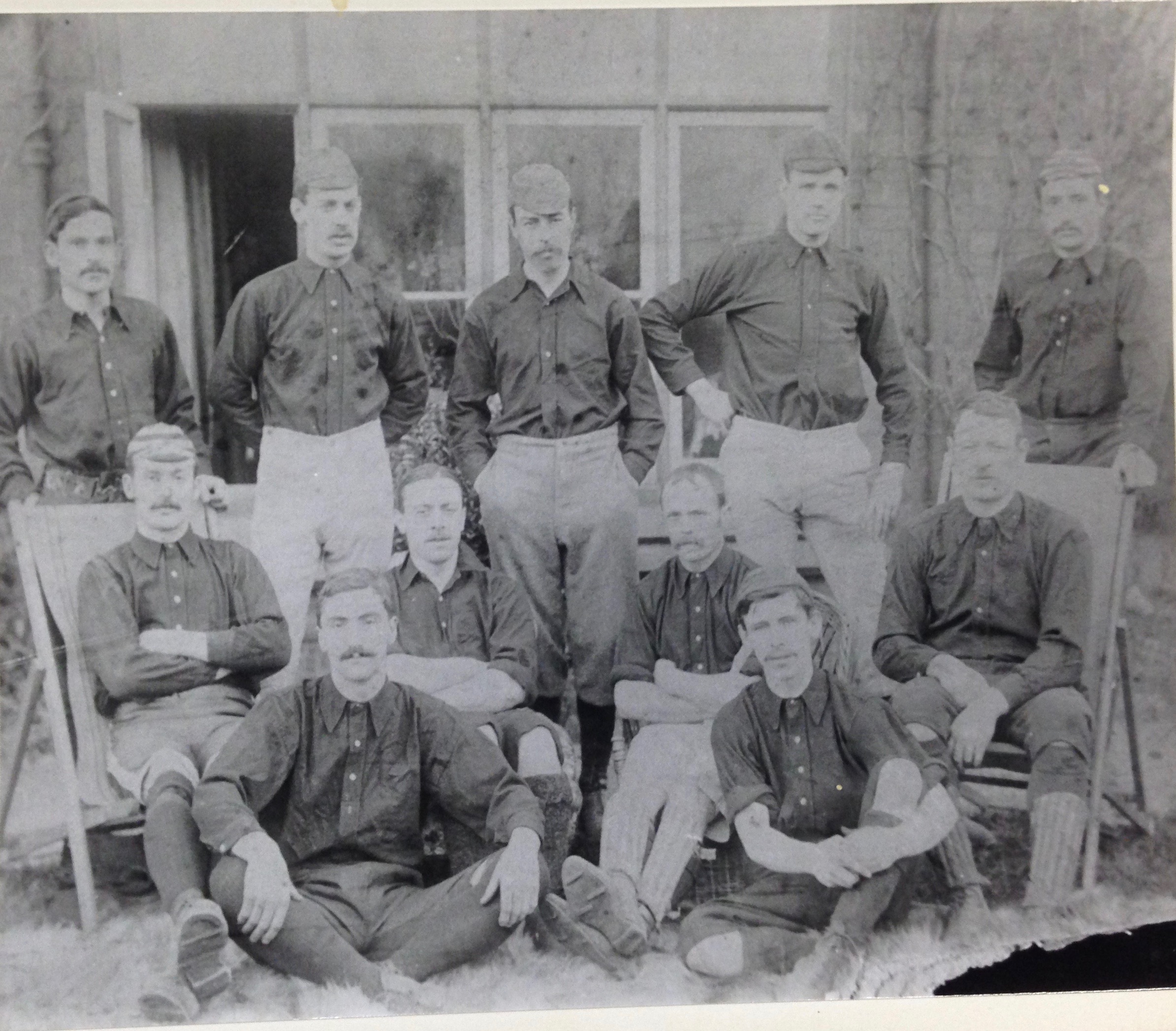 The players are in their cardinal red shirts.  Five players appear to be wearing red caps with two players wearing caps with hoops (possibly from the pink and navy blue kit).  Note the differing knickers, Sanders’ snake belt (which were often in club colours), shin pads outside the stockings and bars instead of studs.

Thanks to Wardown Park Museum, part of Luton Culture. 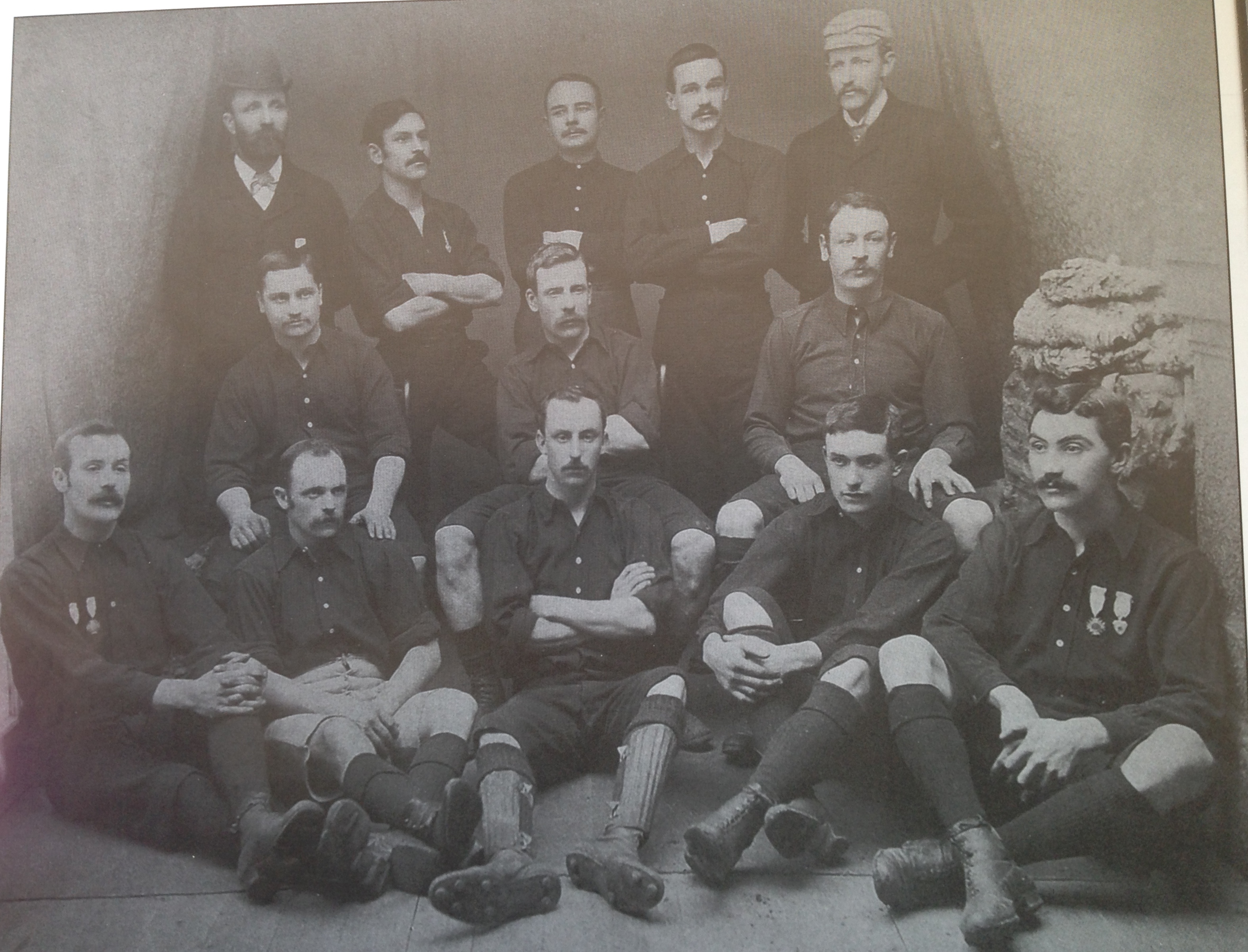 Sanders and the Whitby brothers are wearing medals.  One (the shield) is the runners-up medal for the Kettering Charity Cup 1890.  The Whitby’s wear another medal which I have not been able to identify.  They both played for Harpenden for a time so may have won a medal with them.  They were also excellent runners but it seems unlikely they would have worn an athletics medal for this photo.  Oclee appear to be the only player wearing studs.

Thanks to Roger Wash. 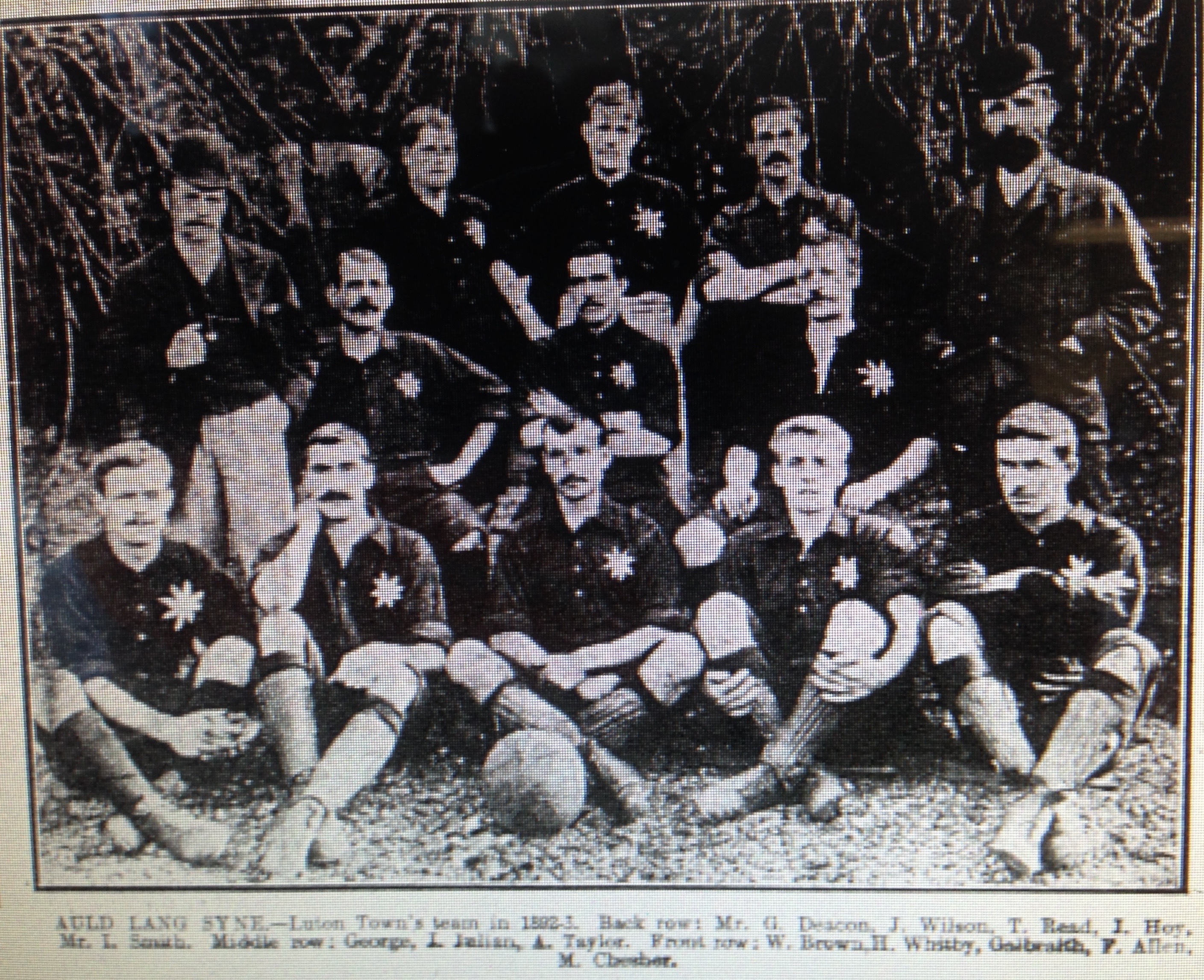 Apologies for the quality of this photo.  It is taken from the microfilm image of the Pictorial from 1937.  It is doubtful that the negative survives to get a better copy. 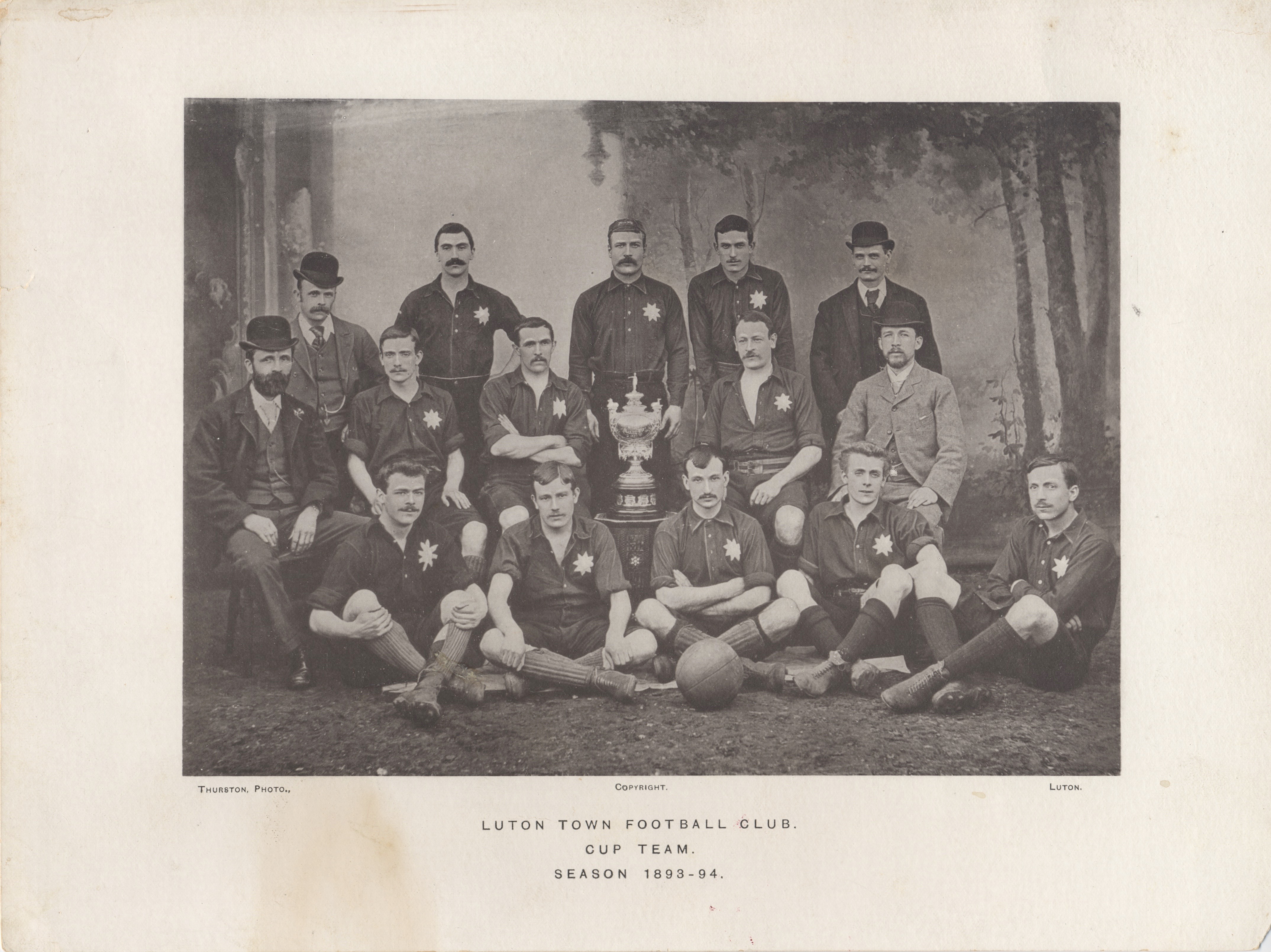 The trophy is the Luton Charity Cup – see the article of the same name in the Library. 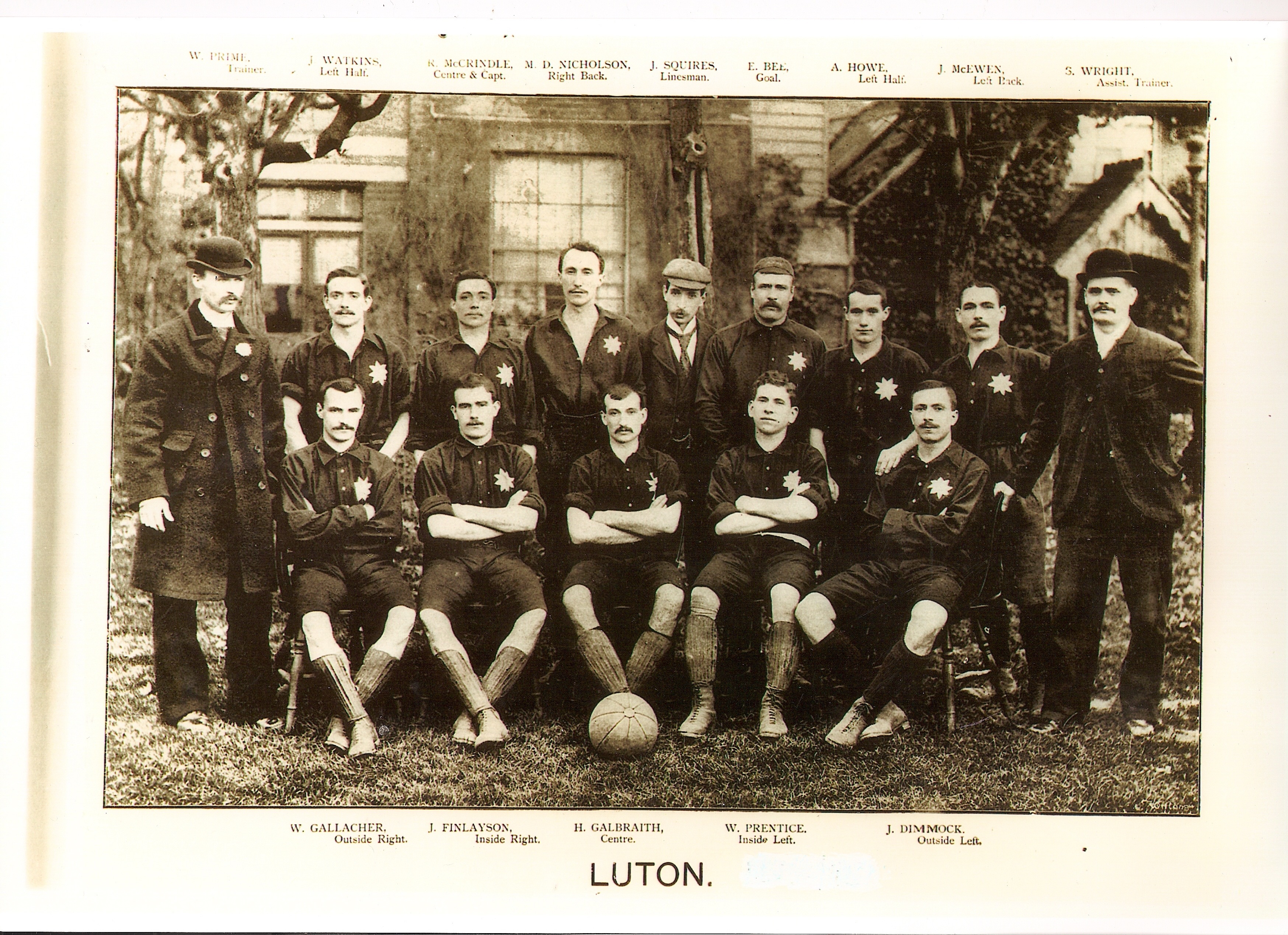 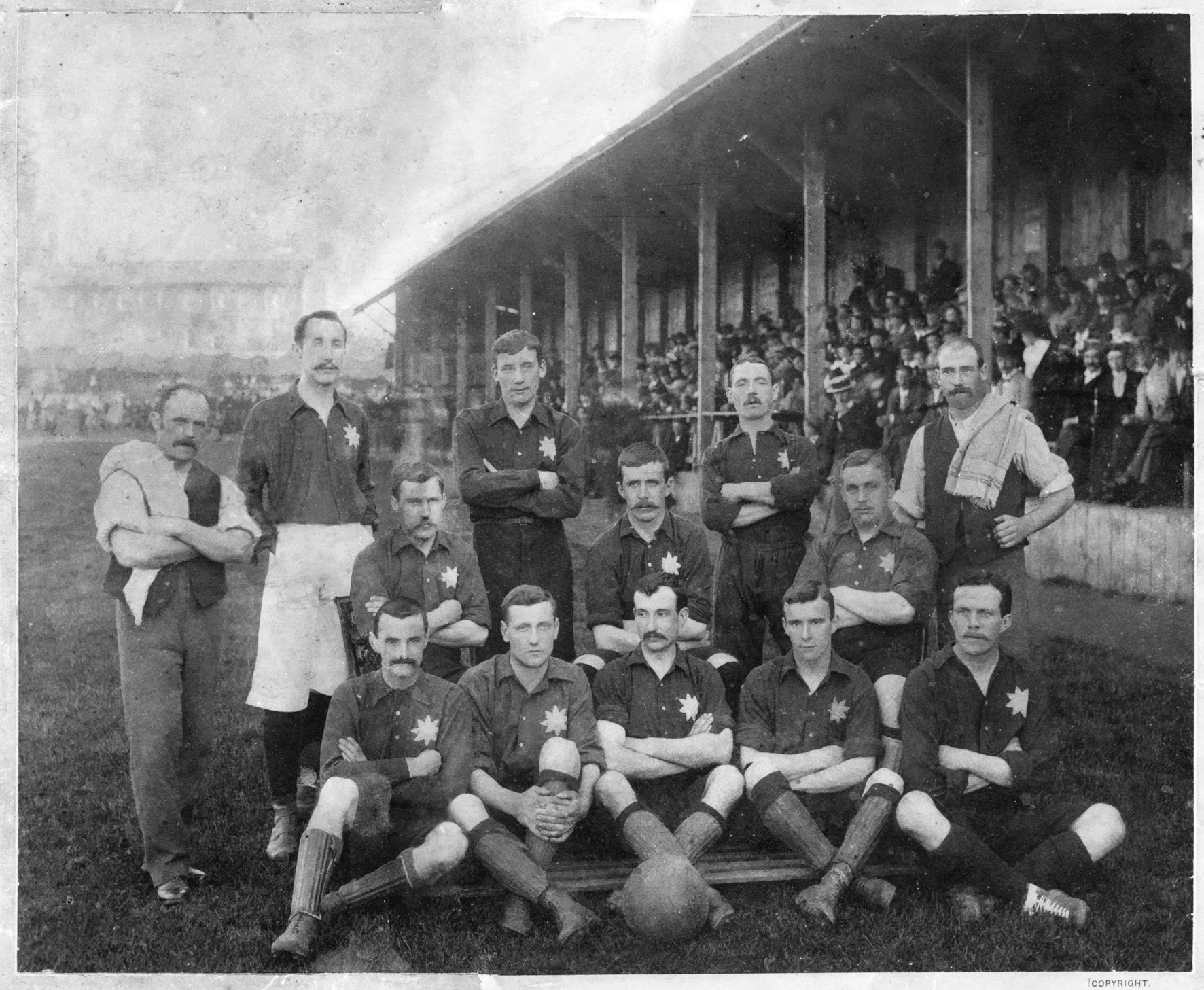 This is the only photograph of the crowd at Dallow Lane so the earliest of Luton fans.  The grandstand was built in the winter of 1893/94.

The photograph above was taken before the end of the 1895/96 season.  As the club won the Luton Charity Cup for a second time, another photo, below, was taken, this time in the goalmouth of the Dallow Lane ground.  The houses in the background face onto Dunstable Road. 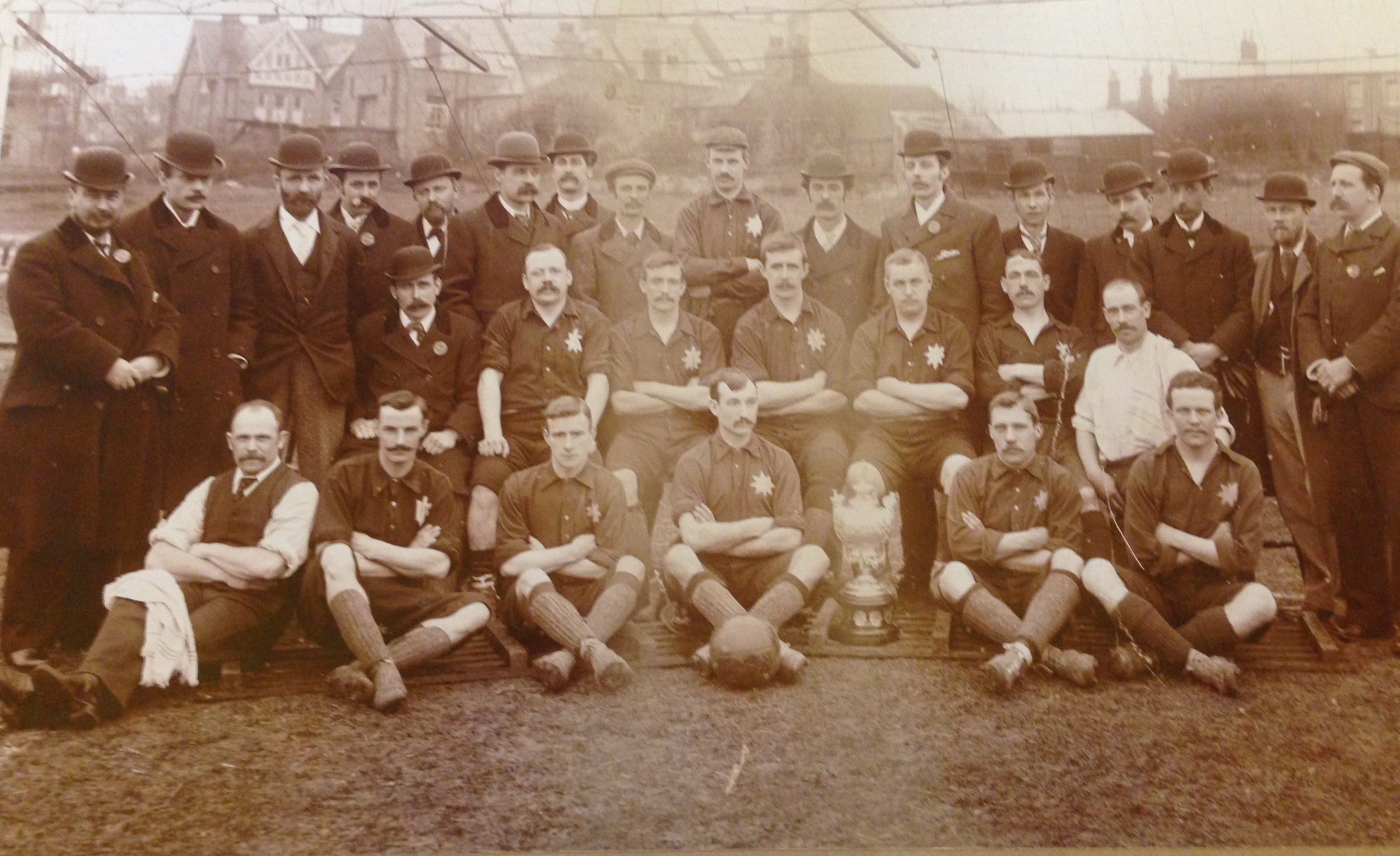 There are 16 “hats” in the photo plus two trainers (Deacon and Lawson).  This is more than the number of men on the committee so a few hangers-on muscled in on the photo.  The players with stars on their shirts are;

John McCartney would become the club’s first manager in 1927.  Note the “foot racks” as they were known that the players are sitting on.  As Dallow Lane was an open field (except for the grandstand) these racks were placed around the pitch to keep people out of the mud. 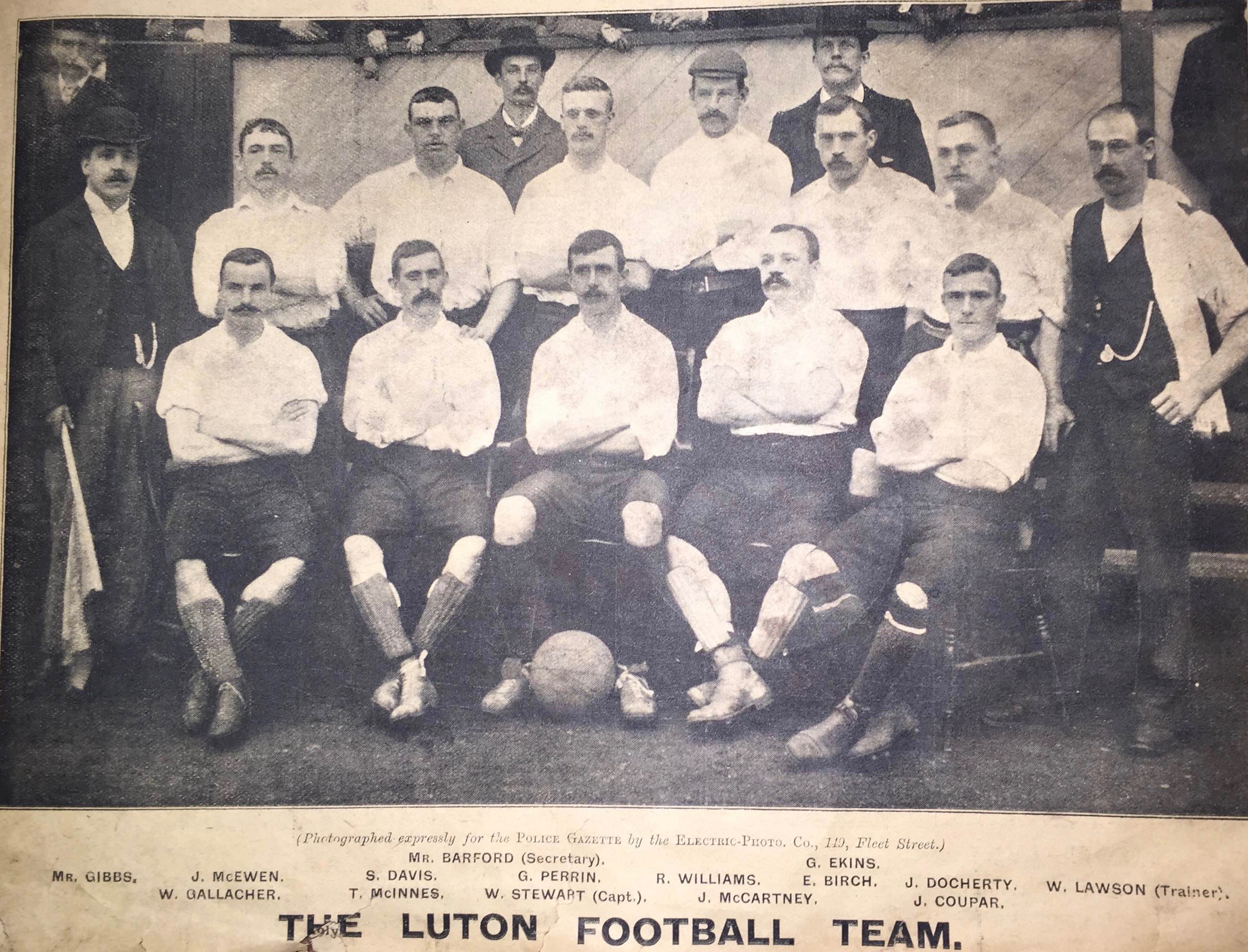 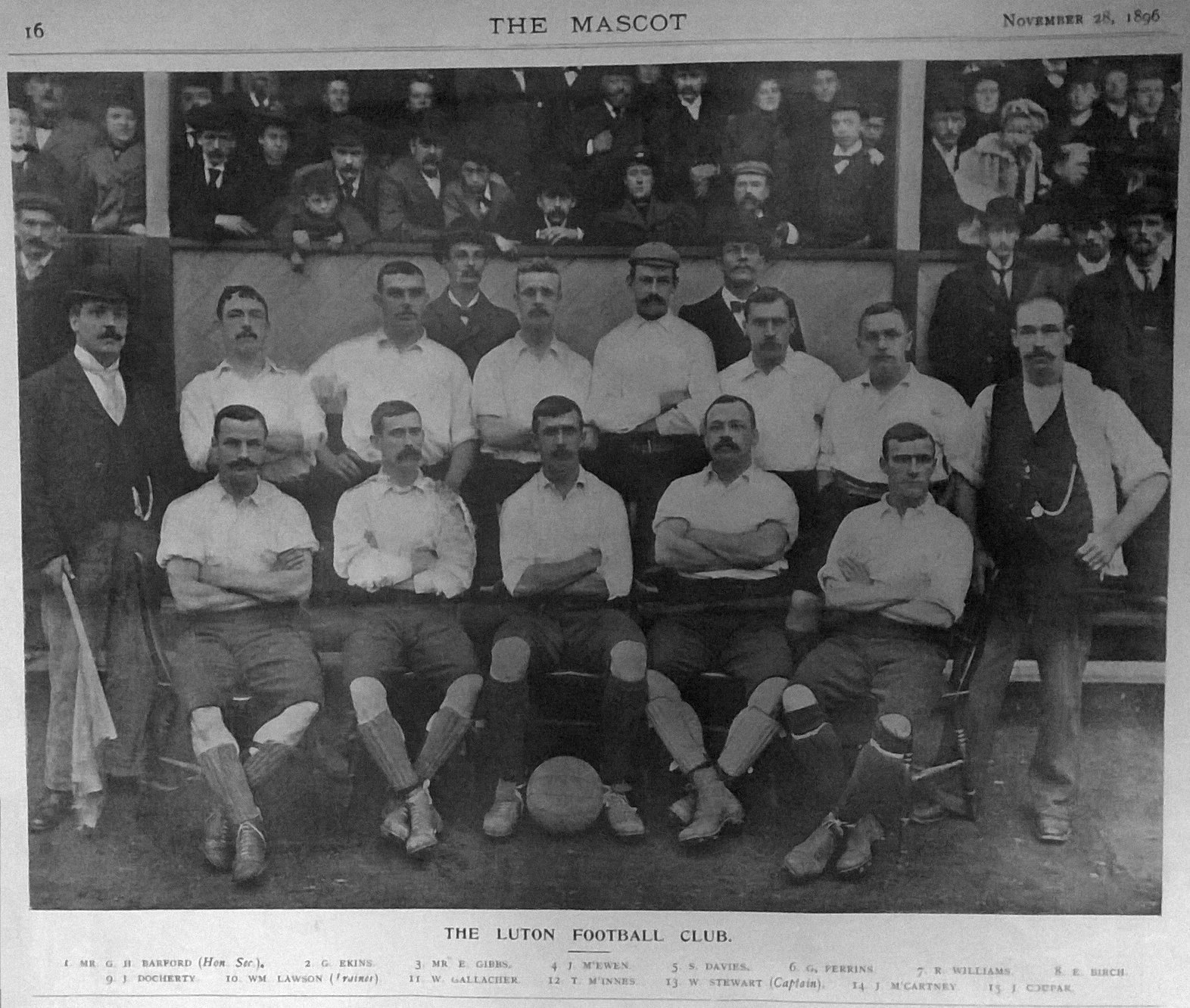 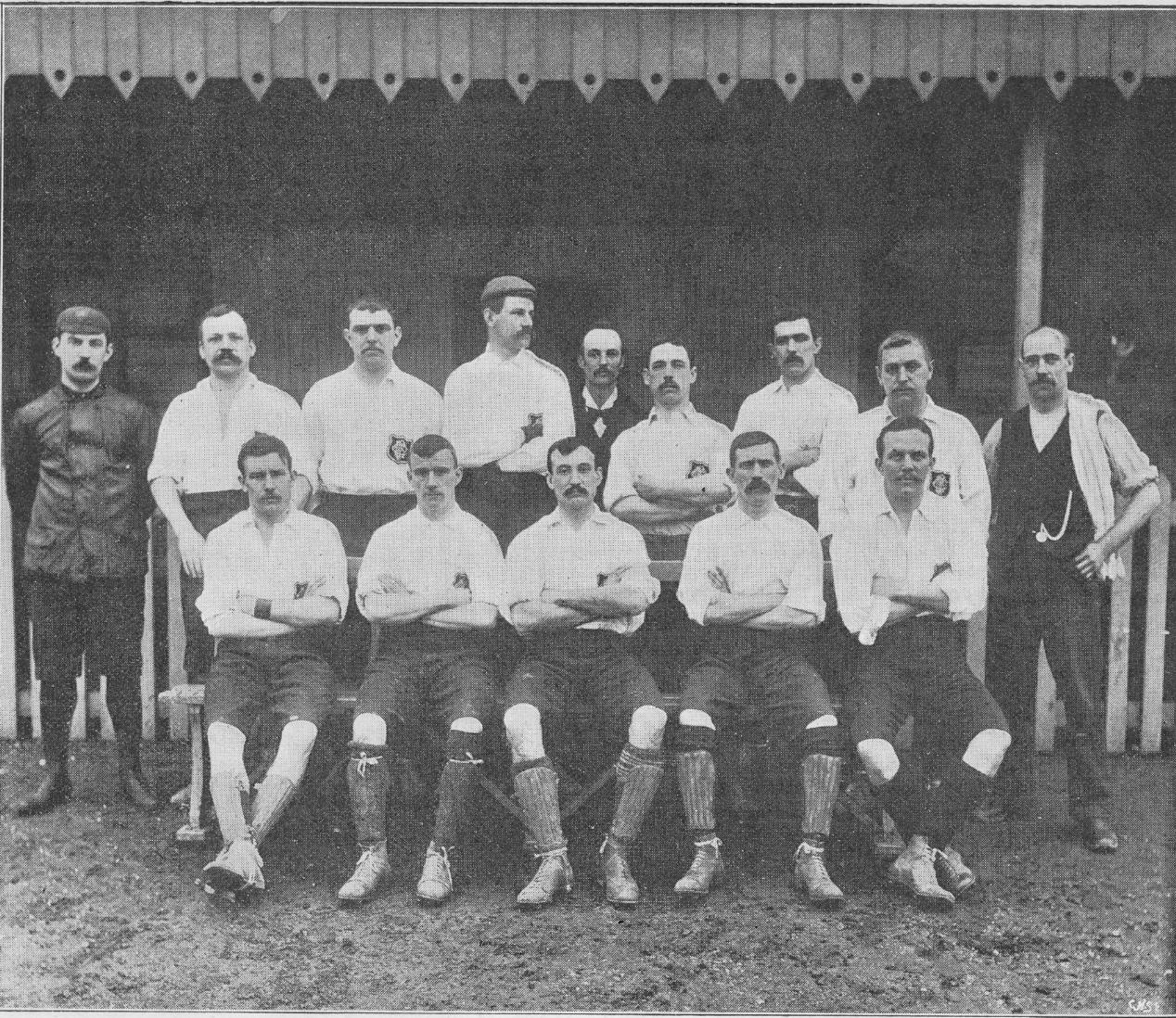 We have three photos from the 1896/97 season and all show the team in white shirts.  Note the first photo is without the badge.  The middle photo, kindly provide by John Thurston, is taken from a slightly different angle to the first.  It also shows more of the crowd. The third photo was taken in February 1897 at Plumstead before a game with Woolwich Arsenal.  Note that Galbraith (seated centre) and Finlayson (seated far left) have hoops at the top of their stockings. 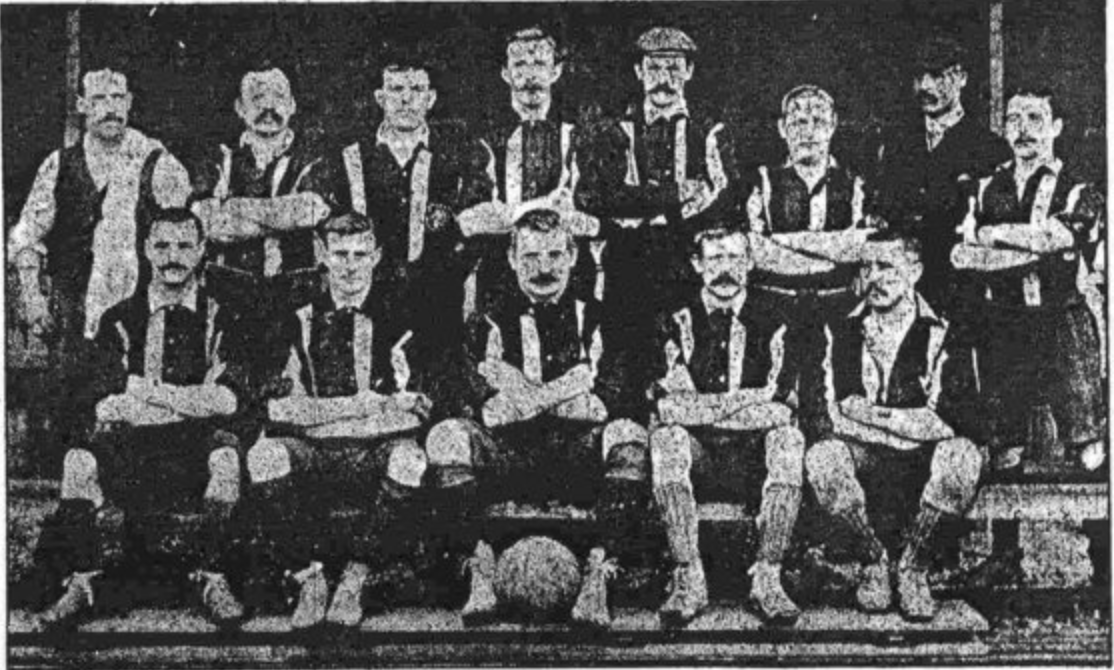 Apologies for the quality of this photo.  I think it has been taken from a newspaper.  If you have a better quality copy please get in touch via the contact button. 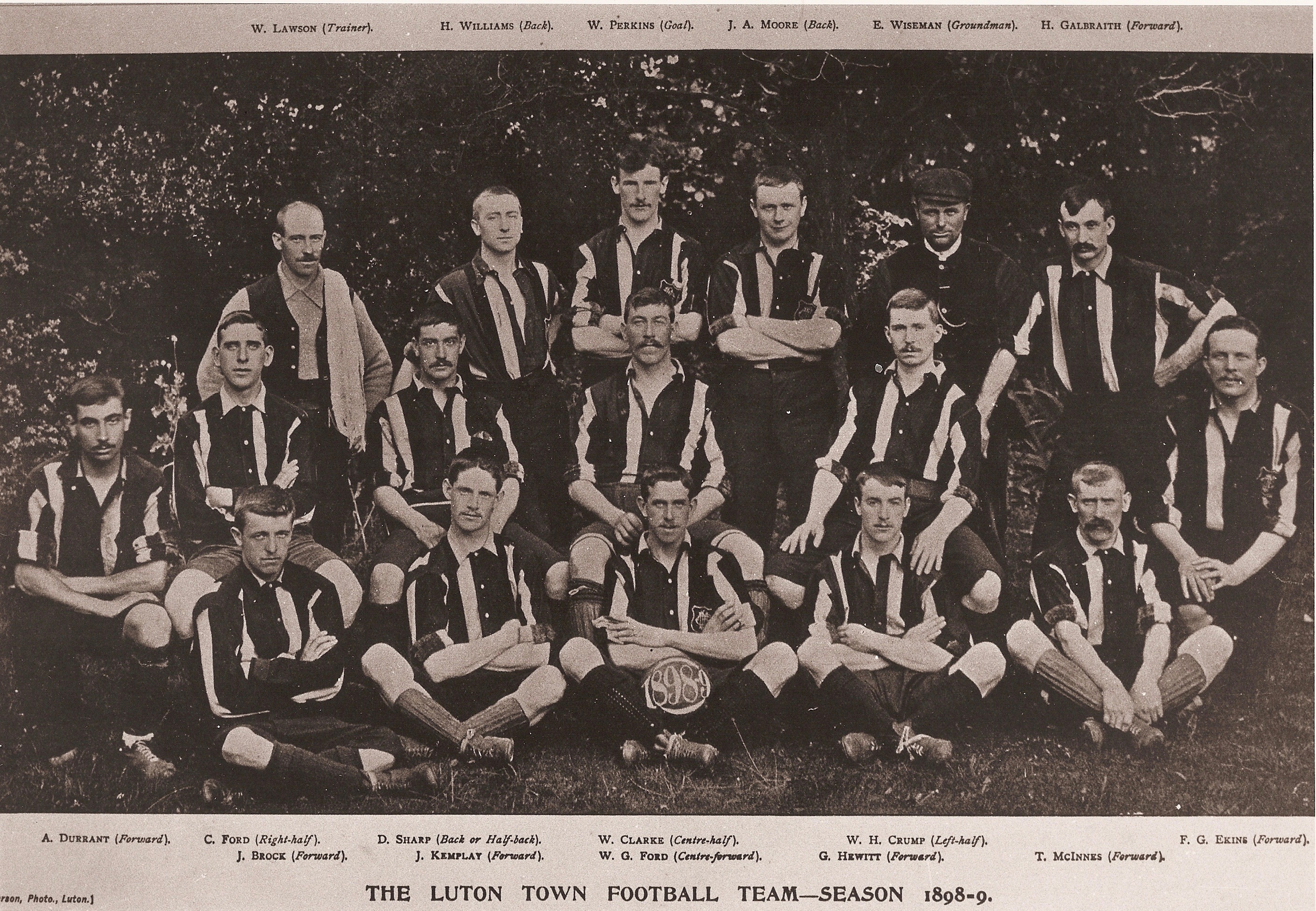 Although the ball in the photo above says this is the 1898/99 team, the players are not wearing the first team shirts.  The club committee had changed colours to black with narrow white stripes, as shown in the photo below. 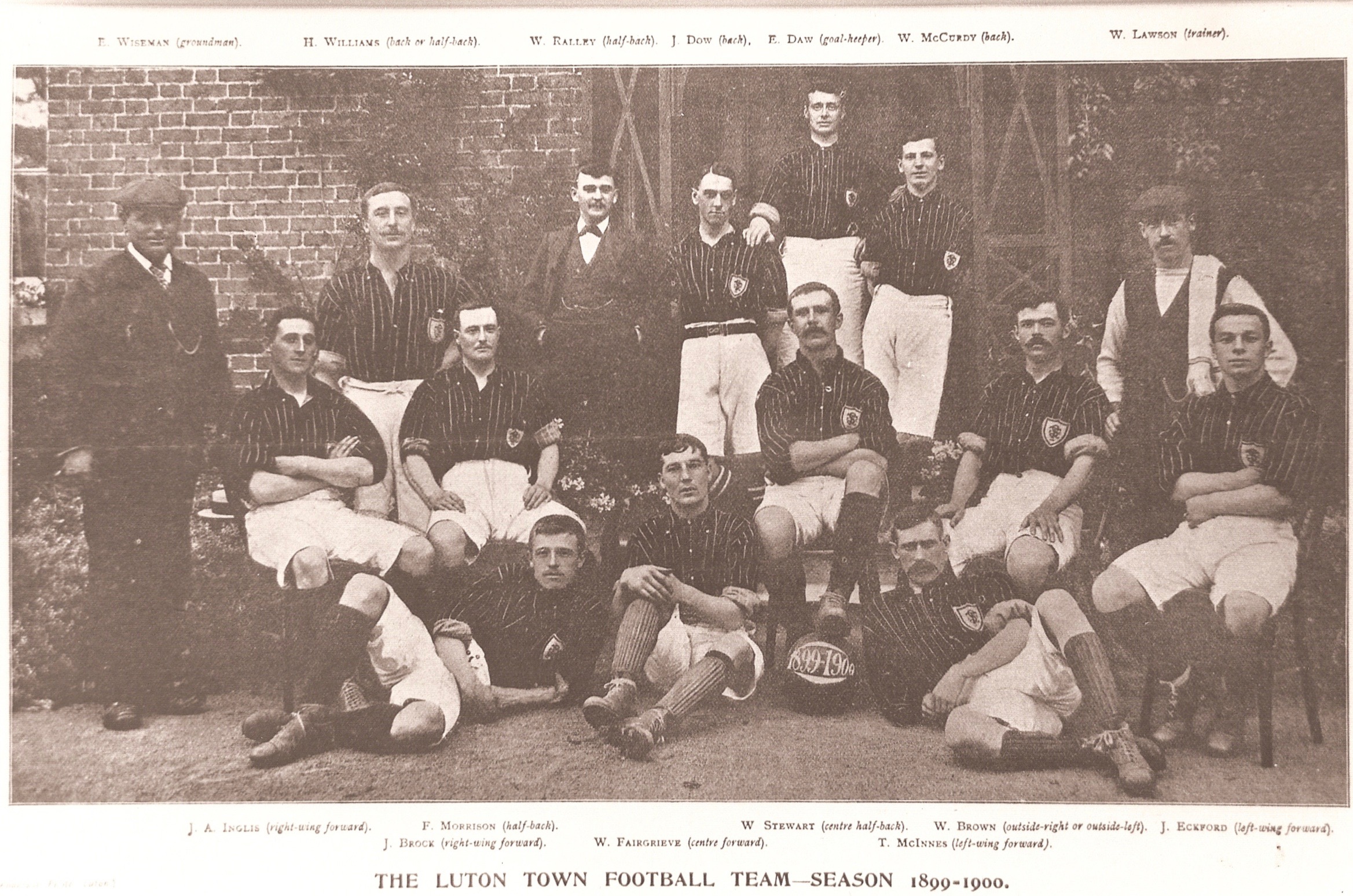 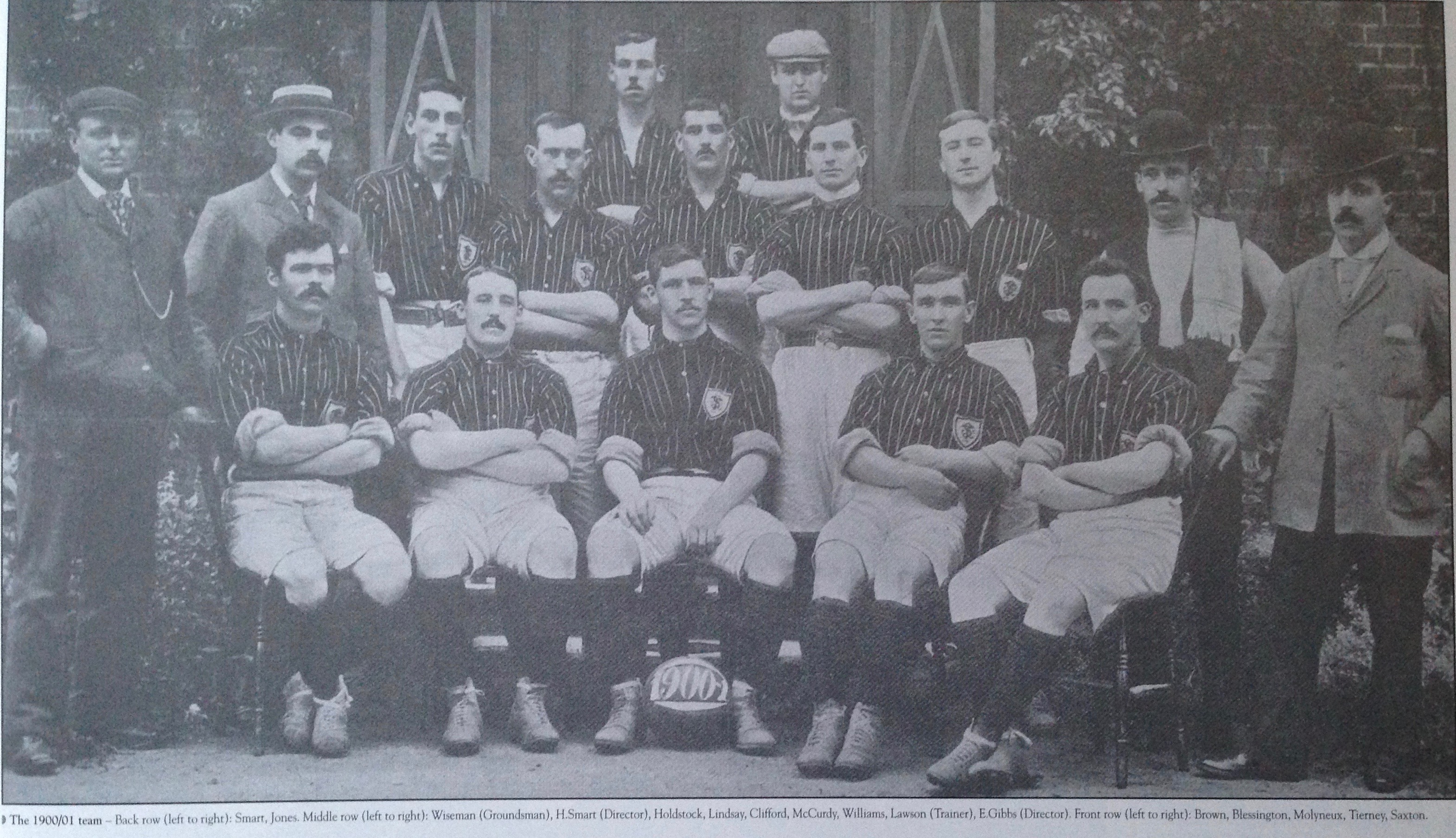 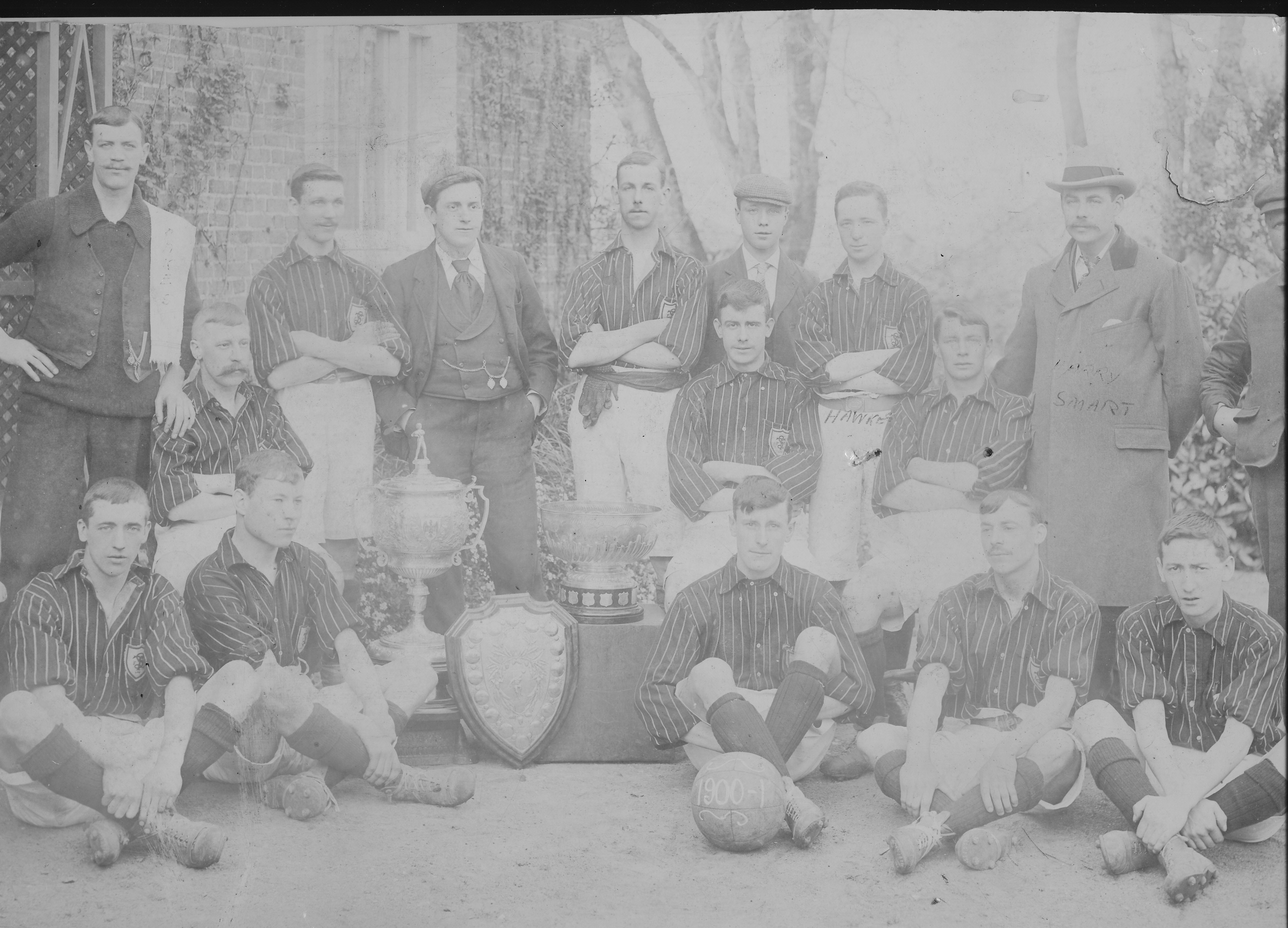 The reserve team were very successful this season winning the Bedford and District League and the Beds Cup.  The other trophy is a mystery at the moment. 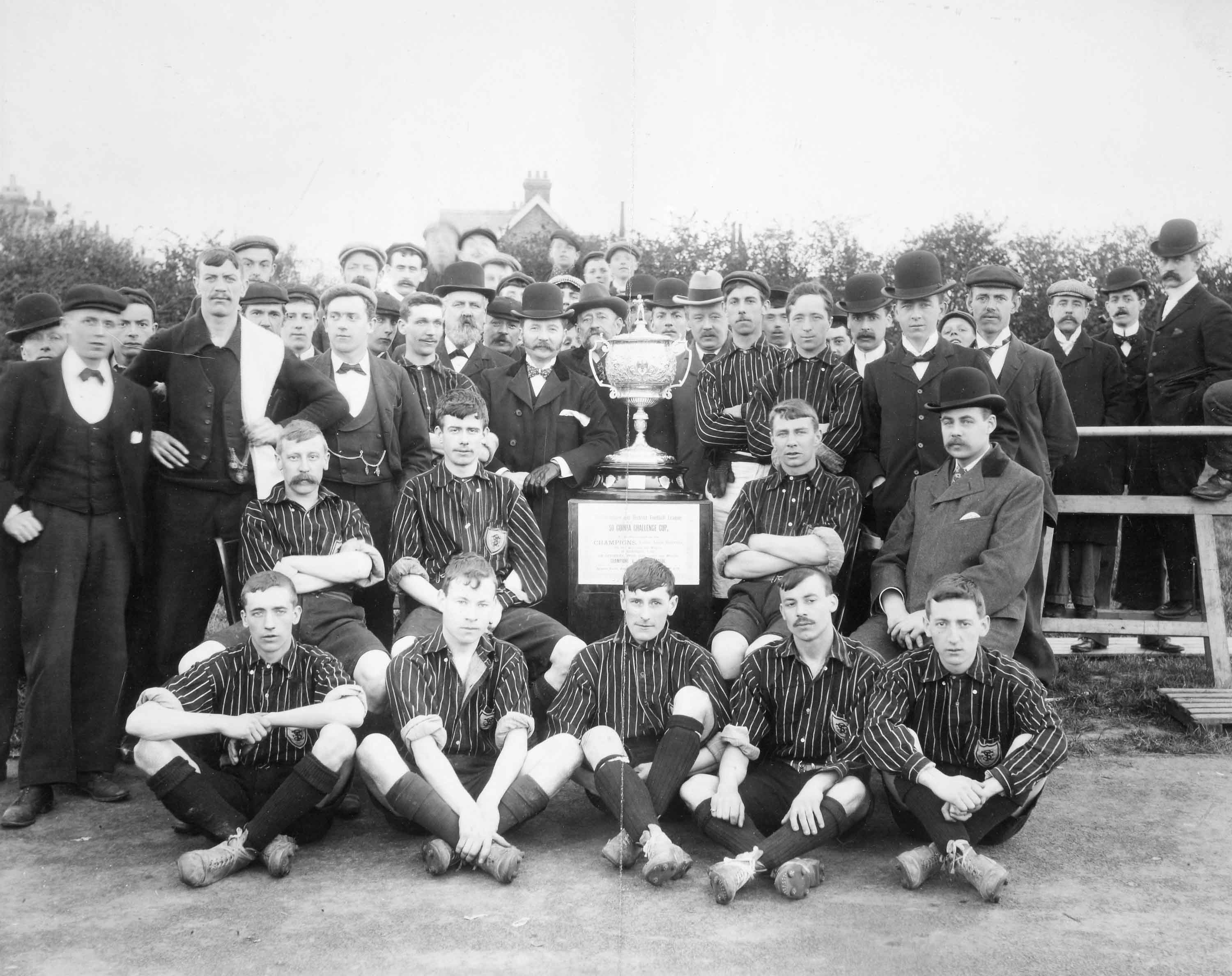 The photo above is of the reserves with the Bedford and District League Trophy plus hangers-on.  Note the keeper in white shorts and cap to distinguish him from the outfield players.  He has his gloves under his belt.  Some players have brass studs as the top button and all have button down collars.  Note the footracks/duckboard to the right which were placed around the ropes to keep the crowd out of the mud.  Two men on the right appear to be standing on a rudimentary wooden terrace.  I am not certain where the photo was taken but I suspect it is the Dunstable Road ground.  The house in the background could be on Dunstable Road or Ivy Road.

No explanation is required for the inclusion of the photograph below; 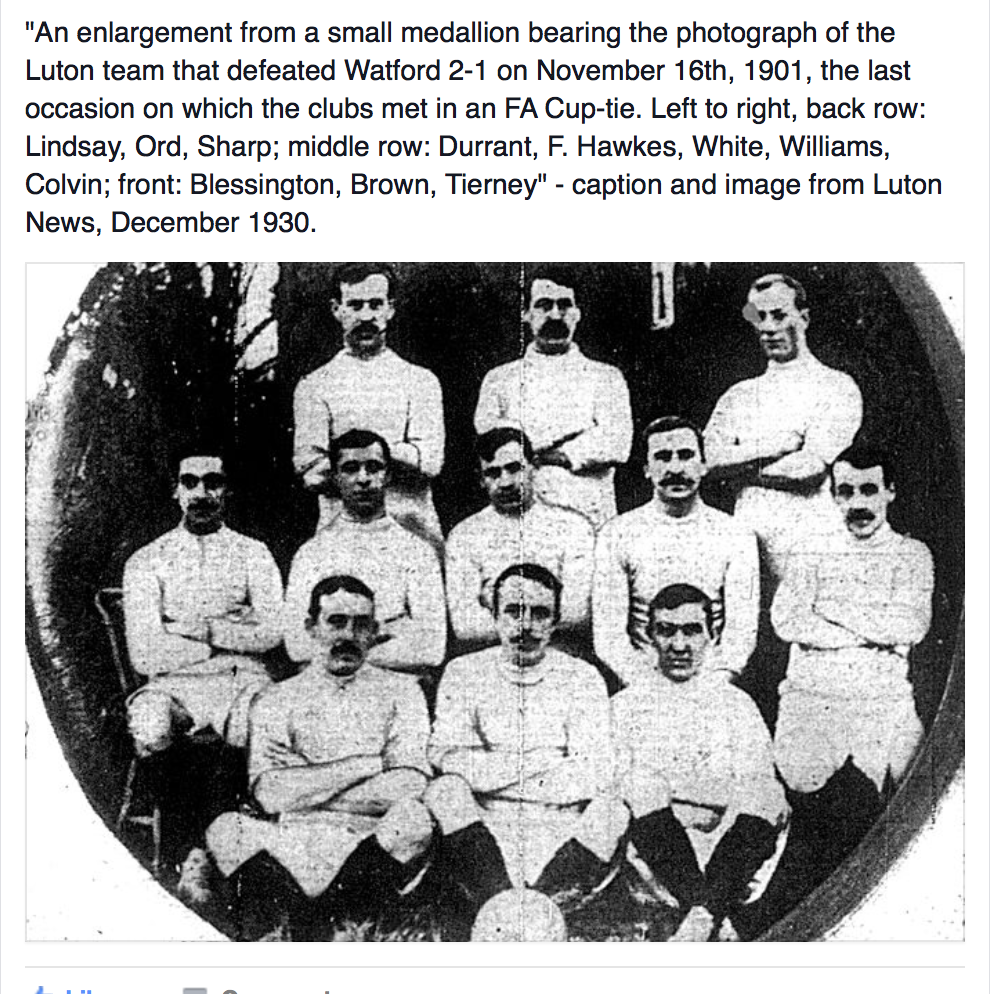 Thanks to Roger Wash.