The 1885 art of goalkeeping was very different to today.  The main points to note are that the goalkeeper –

It is also worth mentioning that offside required three players to play a forward onside.  The vast majority of goalkeepers wore the same shirt as the outfield players until the Football League gave them distinctive shirts in 1909 (however, many clubs used common sense and gave their keeper a distinctive jersey much earlier).  Teams lined up with 5 forwards – Inside and outside right and left and centre forward.

All these factors shaped a goalkeepers play.

My first impression was how wonderful it would be to run around my own half catching passes and running up to the halfway line and launching a kick towards the opposing goal.  The reality shows a very different attitude from the vast majority of goalkeepers.  Caution appears to have been the watchword of the custodian for two reasons.  Firstly, the ball could not be carried more than two steps.  Bouncing could extend the distance but a muddy, uneven pitch would make this a risky undertaking.  Secondly, catching the ball could prove dangerous.

The offside rule enabled one (full) back to stay up the pitch and play the offside trap.  The other back could remain near the goalkeeper to protect him from being barged.  The danger from barging was highlighted in an 1889 Luton Town reserve game.  Herbert Spratley scored two goals against Caddington by twice barging the keeper across the line with the ball.  In the same game, as a tame shot came in, Spratley barged the keeper out of the way resulting in a goal.

“At this stage the ball was shot in goal, when the goal-keeper really appeared to be playing with it in his hands, and Wheeler and others rushing in they forced it through.  The company [crowd] here indulged in a hearty laugh at the goal-keepers expense.” 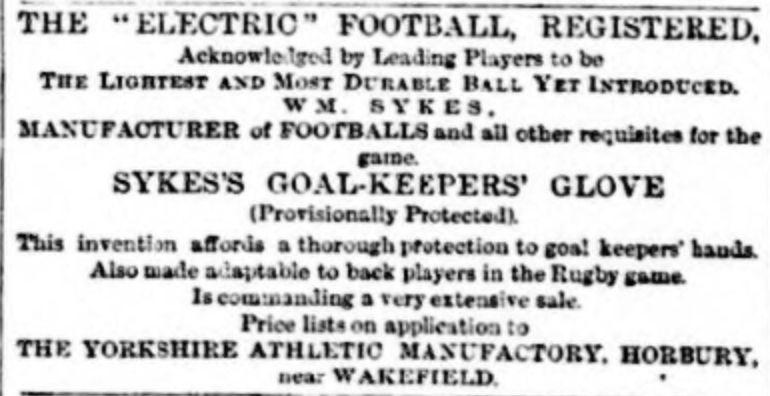 Because of clips like the above, some people take the view that keepers did not dive but stood there and waved the ball goodbye if they could not reach it.  This is totally inaccurate.  Why would a goalkeeper let an important goal in because he didn’t want to dive?

The following drawing from 1895 and two photos from the 1900 and 1902 F.A. Cup Finals show keepers sprawling across their goal. 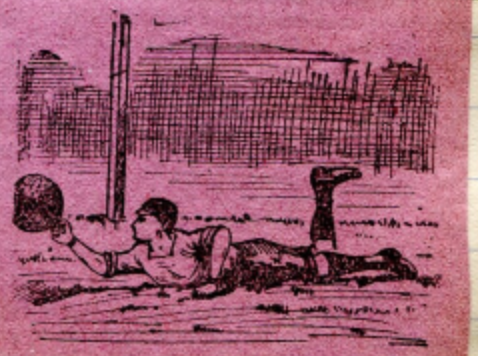 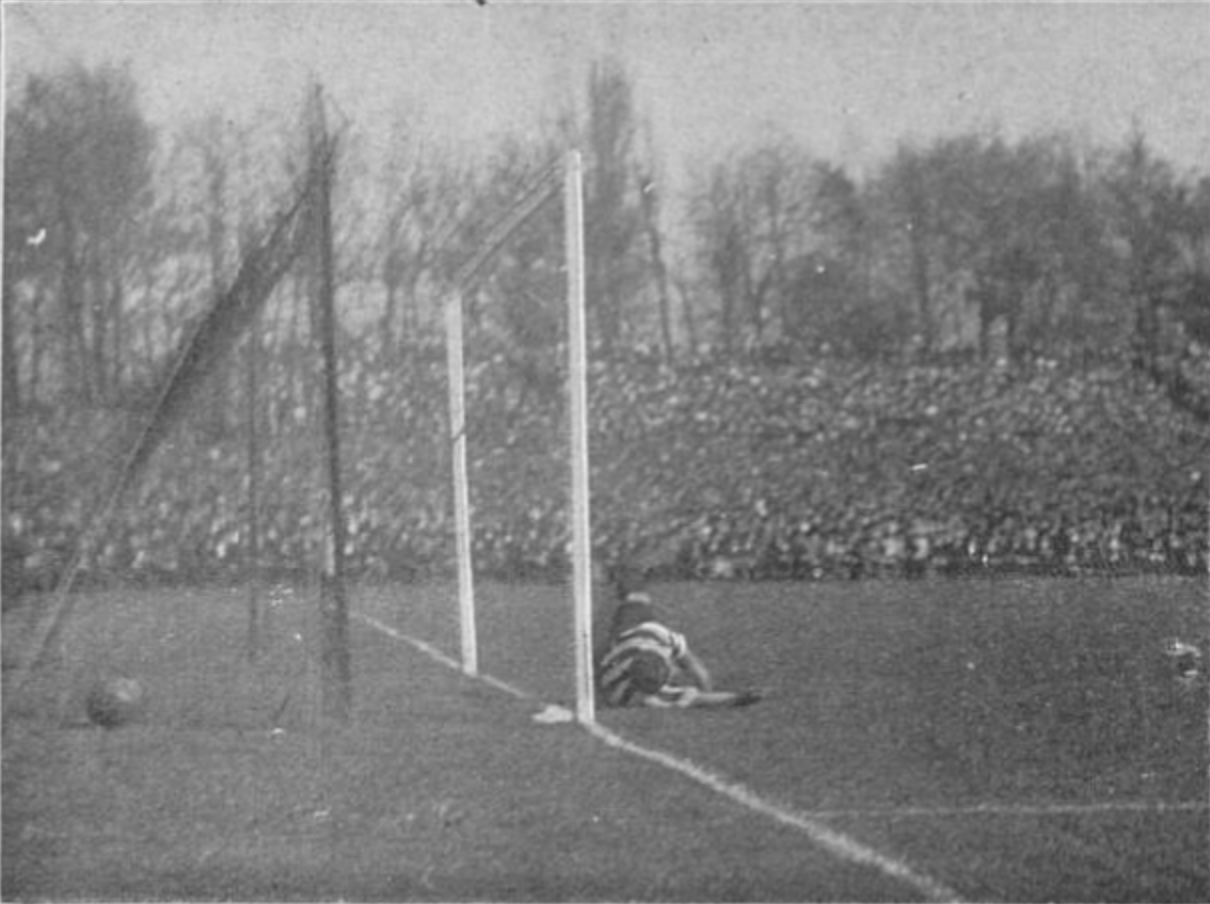 To help complete the picture of the life of a keeper here are some local newspaper clips.

In 1892 Luton Town reached the first round proper of the F.A. cup and a London Newspaper printed a pen picture of each player prior to their game against Middlesbrough.

“The important position of goal-keeper is filled by J. Burley, this being his second season with the team.  A cool and clever custodian is Burley, ready for anything that may turn up, and always happy when he has plenty of work to do.  He is a sure kick, but he prefers using his hands when he can, and is very clever in getting the ball out of danger. “

Edmund “Teddy” Bee had a narrow escape in September 1893 against Ilford as reported by the Luton News;

“On one occasion he threw himself on the ball and cleared just as the visitors were preparing to do a war-dance on his body.”

“Immediately afterwards, Fraser sent in a swift, low shot and Bee fell forward on the ground with the ball firmly in his grasp.  The Guards made desperate efforts to deprive him, and there seemed at least a pile of a dozen men above the Luton custodian’s body.  Despite this, Bee got the ball away at last, and the referee awarded him a free-kick for a foul.”

Goalkeepers were, from the beginning, very much a breed apart – mad, bad or dangerous.

There must have been issues with the goalkeeper wearing the same colours as the outfield players. In early games there were two umpires on the pitch making decisions.  One umpire from each team had to identify which players were in goal so that the relevant rules on handling and carrying the ball could be applied.  When a referee (independent in important games) was introduced he also needed to be alert.  I have not found any direct incidents of mistaken identity during a game.  However, I believe there must have been some confusion as different shirts began to appear in the 1880’s.

“they [Athletic] appeared in spotless white shirts, with one exception.  This was the goal-keeper, who attired in a dark blue (or black) from head to foot, looked even more diminutive than he really is.”

There are photos of Wolves (below) and West Brom goalkeepers in different shirts in the 1880’s.  Wolves shows the goalkeeper in a natty uniform. 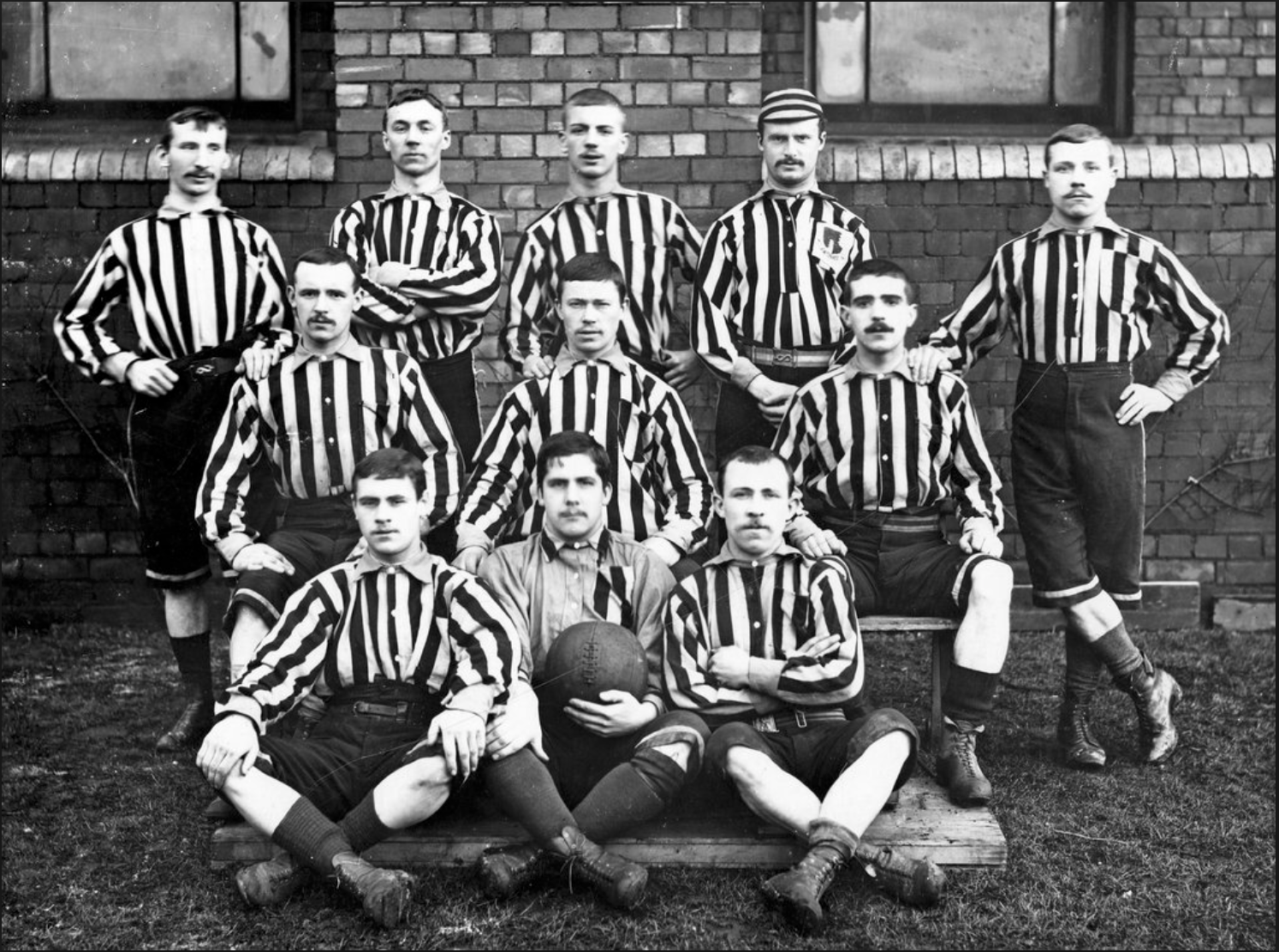 “Wolverton were much more of a uniform looking team, all of them, with the exception of the goal-keeper, playing in the same colour.”

While two clips do not make a watertight case, it does appear that common sense was applied by some clubs and officials.  Barging the goalkeeper at any time was outlawed in 1894. This meant that the goalkeeper could only be barged if he had the ball in his possession.  This made a quick identification of the goalkeeper even more necessary.  This seems to have accelerated the use of different goalkeepers shirts.

The Luton Town goalkeeper was to get his own distinctive shirt in 1898 as reported by the Luton News, October 1898 –

“The Luton players, it may be interesting to state, appeared in their new costume on Monday, vis,..white knickers and black and white striped shirts.  The goalkeeper’s shirt, however, was red and black.  The dress is a great improvement on that previously worn, and added much to the smart appearance of the team.”