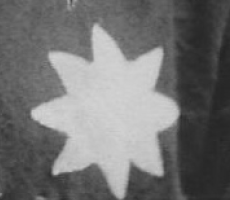 The first known badge worn on a Luton Town shirt was the mysterious 8 pointed star introduced in 1892.  There are three leading theories for the badge.  Firstly, it represents the Temperance Star – its appearance coincided with the arrival of J.W. Julian as club player coach who was a known abstainer.  Some members of the club committee also held teetotal views.  The second theory is that it is a military star.  The claret shirts were purchased from Bury Park F.C. – that club played on Captain Carruthers pitch next to his farmhouse.  Carruthers, (of the Bedfordshire Regiment Volunteer Rifles) was a great supporter of sports in the town and the badge may represent his Regiment.  The third leading theory is that it is a random shape that were popular with some clubs.

When William Brown appeared with this home made star on his shirt in a photo taken in April 1893.  This indicates that there was a limited supply of uniform shaped stars.

When changing to the red, black and white striped shirt in 1896, the club removed the 8 pointed star in favour of a monogrammed “LTFC”.  Photographs of the team over the 3 seasons it was worn, show some players with the badge and some without.  Although the club ordered 30 shirts, there is no evidence about the number of badges ordered.  The club must have run out of badges and decided not to order more.

The club had become a Limited Company in 1897, but it was not until the 1898/99 season that this was recognised on the badge.  A new design appeared on new black and white striped shirts with the “LTFC” design changed to be clearer with “LTD” below it.  This badge disappeared with the change in 1900 to the light blue shirt.  A badge did not appear again on a Luton shirt until 1933.