In 2015 I commissioned a painting from Luton artist, Andrew Naish in order to give a representation of football in 1885.   I set the scene for Andrew in respect the kit, pitch markings and background and I left the rest to Andrew.   The result is shown below. 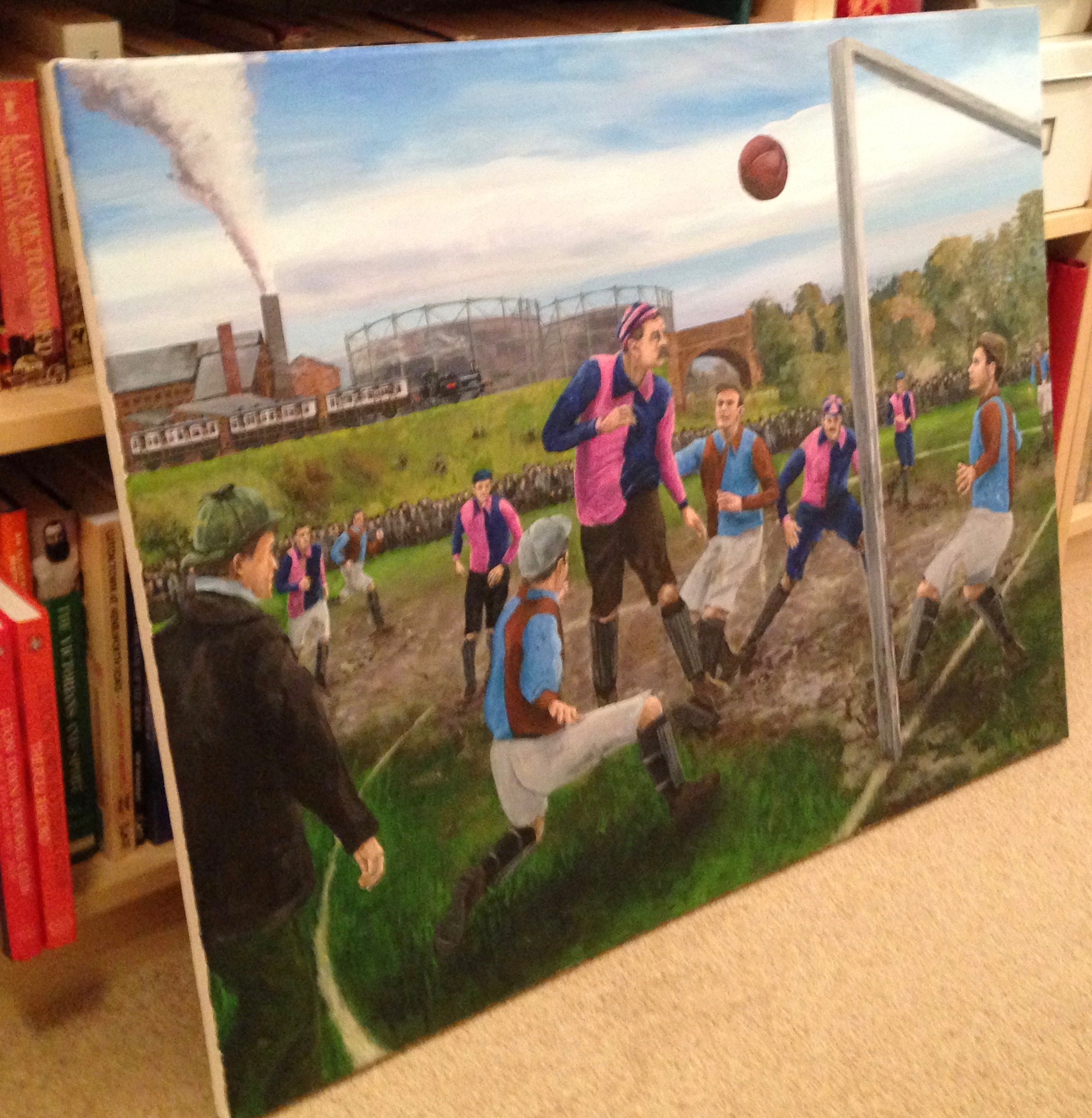 It is an accurate recreation of Luton Town v Notts County played on the Dallow Lane ground, Luton on 7th November 1885. Luton won 2 0 in front of 2,000 spectators.  As you look at the painting you are standing with your back to Dallow Lane with the Workhouse behind you.  You are looking towards what is now the busway bridge over Dunstable Road.  Sainsbury’s car park has replaced the gas holders.  I chose this game because County were the first big club to come to the town.  It also helped that we know the colours of County and that we won of course. Frank Whitby is in the forefront in the pink and blue shirt.  All the football research I have done has come to life in the painting.  In addition, I had to research other matters such as what 1885 gas holders looked like. The train is on the old line to Dunstable and there is a record of a Luton player missing an open goal because of smoke from a passing engine. 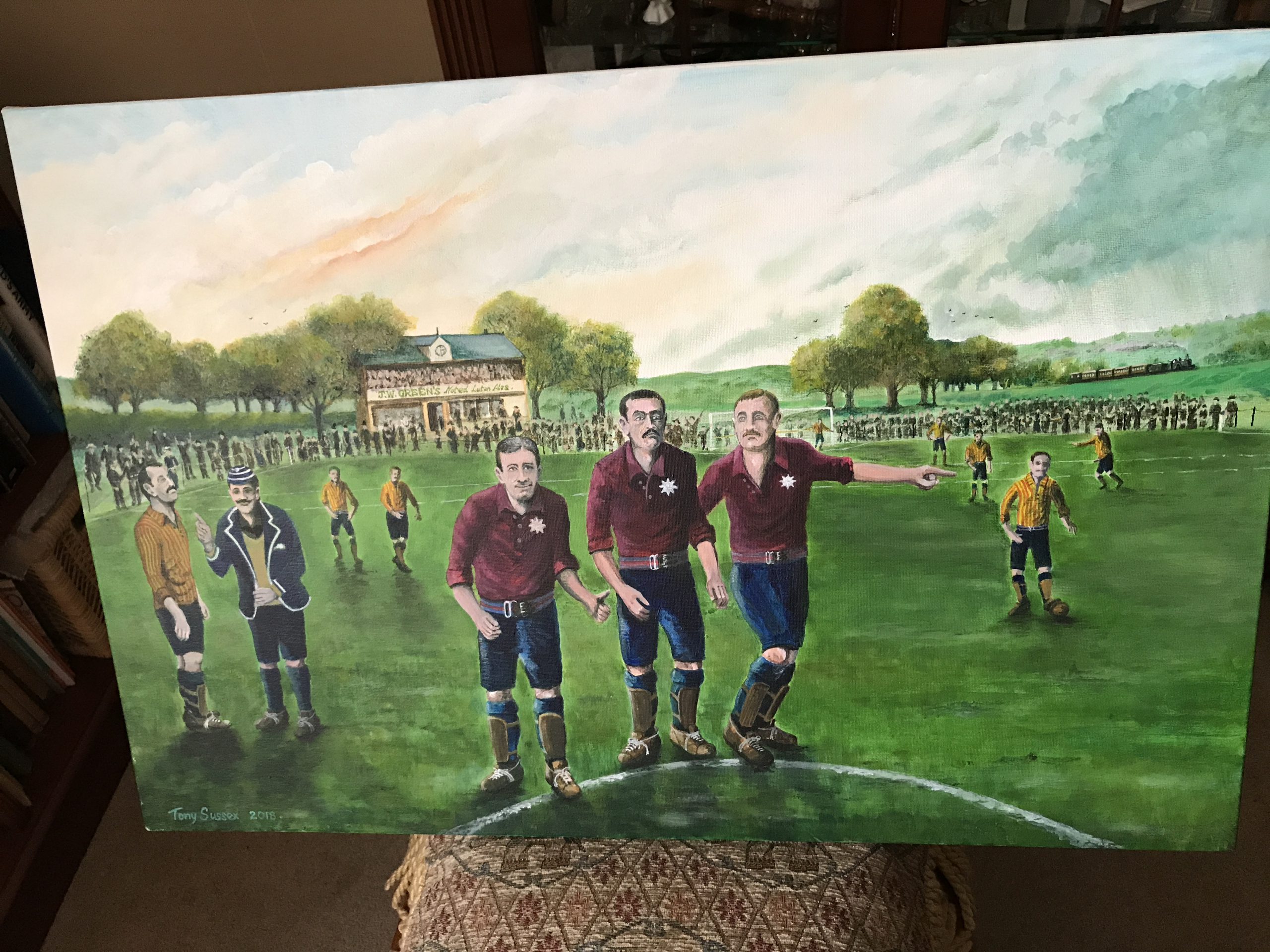 “The Three Captains” by Tony Sussex.  When I commissioned the painting I was quite specific in what I wanted so there was little artistic licence for Tony to get his teeth into.   I am very grateful for his indulgence.

The scene shows the three captains on their way back after a goal has been scored against West Herts.  As you look at the painting you have your back to the Dunstable Road.  The railway line on the right is now the busway viewed towards Dunstable.  The pavilion was paid for by J.W. Green, the brewer, at the cost of £50.  It had seating on top and changing rooms and refreshments beneath (the atmosphere at games improved after the latter was installed).

The painting is an important one as it marks a crossroads in the early history of the club when three captain played in the same match.  On the left is the star, captain and talisman of the early years, J.C. Lomax, who had drifted away from the club after his marriage in 1890.  However, when he attended the funeral of John Long in Luton in the Summer of 1892 he briefly renewed his relationship with the club.  He made a number of appearances early in the 1892/93 season.

In the centre, is J.W. Julian, the ex Royal Arsenal captain who had just arrived at Strawopolis.  He had been ousted from the Royalists’ first team by an influx of Scottish and Northern players when they joined the Football League.  His signing was a great coup for the Straw Plaiters and he acted as player coach.  His efforts, and those of the club committee, helped launch the team from also rans into the top three in the south of England.

The third captain is the old warhorse, Arthur Taylor, who was appointed the club’s first permanent captain in September 1891.  He was the first player to join the club from outside Luton – living and working in Bedford.  He was a great leader of men, an athlete and had represented Bedfordshire alongside J.C. Lomax.

The match is set at Dallow Lane on the 1st October 1892 and the report below comes from  the Luton Reporter of 8th October 1892.  The opponents are West Herts who would merge with Watford St. Mary’s in 1898 to become Watford F.C..