The players and drink

Players and alcohol was not an issue at the club for the first 9 years.  The Temperance Movement was strong in the town and many had taken the pledge not to partake of alcohol.  How many players and committee men had taken and adhered to the pledge is unknown.  What we do know is that there are no mentions in the club minute book – which records the actions of the committee that ran the club.

It is a matter of fact that when the Scots came South to play for the Straw Plaiters they brought some unwanted baggage.  The first instance came before the committee in February 1894 –

“Mr Finlayson then came before the committee and after a few words of advice from Messrs Hackett, Thompson and Barford promised to try his best to keep from the drink”. 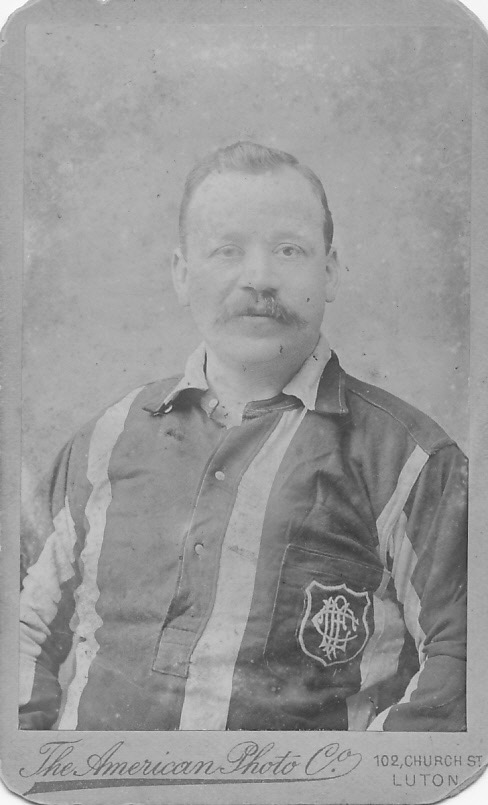 John “Finny” Finlayson was signed in the Summer of 1893 on 30 shillings a week.  That was a living wage for a couple so Finny, a young single man, had money to spare.  Apart from playing once or twice a week, the only other commitment to the club was to train for an hour each day then he was back to his digs.  Bored, he probably wandered into his local for company.

The problem was to increase dramatically when the Club entered the Southern League and two big drinkers were signed in the form of Billy Prentice and John McCartney.  If you look at McCartney’s photo left I seem to detect a glazed look in his eyes.

Billy Prentice was the first new signing to come before the committee.  His form had been poor and the committee suspected drink was the cause so on the 26th November 1894 they resolved –

“that Prentice be asked to appear before the emergency committee some gentlemen on the committee thinking he was not taking sufficient care of himself.”

“the Chairman spoke to Prentice with regard to taking care of himself also as to the advisability of not taking too much to drink.

To both these charges Prentice gave flat denial stating that during the whole fortnight he had been on the injured list he had not been out of doors 12 hours.  He further stated he was feeling far from far from well and asked to be allowed a weeks holiday for a change of air, at the same time bringing a letter from a doctor.  It was therefore resolved to let Prentice know final position in the morning as to his going away.”

After Prentice had gone, secretary read a postscript at the foot of the letter from the Doctor stating he would like to see someone after the meeting.  It was then arranged that McShane and Secretary should wait upon Doctor McArthur.  After visiting the Doctor it was resolved that Prentice should be thoroughly examined by the doctor on Saturday morning the permission for the holiday to be given according to the doctors report.”

Billy Prentice was released at the end of the season.

“Jack appeared before the committee and acknowledged that he had taken too much to drink but promised to keep from it in future.”

The club had expected to compete closely with Millwall to be Champions of the Southern League.  The fact that they were some way behind the Dockers was of concern especially as so much money was being invested in them.  The Emergency Committee meeting on the 19th March 1895 appears to be an attempt to clear the air –

“met the players at 8 o’clock.  Mr G.H. Barford as Chairman informed them that they must train each day during the week except Friday when a walk would take the place of the usual training.

It was evident by the game on Saturday some of the men, not all, were clean out of condition and it had also come to the knowledge of the committee that some were not taking care of themselves as they should.  The committee knew perfectly well that they could play football and thought it almost time we had a taste of that which they had given us before.

The committee also wished the players to abstain from the habit of swearing at each other on the field of play.

With regard to the rumours that were floating about no notice would be taken of this time but for future any complaint that came to the Committee would be sifted to the bottom and the player dealt with accordingly.  In conclusion Mr Barford asked the players for the sake of themselves, the supporters and the club to pull together and then he was sure they would succeed.”

“The conduct of McCartney then came before the meeting rumours abounding that he was the worse for drink on Saturday night.  It was stated by Mr Barford that last year we resolved to take no notice whatsoever of rumour or anything that came second handed and he thought this season we ought to act the same and bring nothing before the committee unless actually seen officially.  Mr Squires mentioned that he had seen it himself.  It was therefore resolved that Messrs McCartney and Finlayson should attend before the Emergency committee on Tuesday September 3rd.”

“McCartney came before the committee when the Secretary addressed a few words to him with regard to his conduct and condition on Saturday night August 31st.  In answer to the charge he acknowledged that he was in fault and guaranteed to keep from the drink and that the club should suffer in no way on his account.  He further suggested that a notice should be posted in the dressing room that the trainer would be expected to report to the committee any player found the worse for drink.”

The problem with that approach was that the main trainer, Billy Lawson, was also a drinker.  The committee went on to deal with Finny –

“Finlayson then came before the committee when the Secretary spoke to him about his condition on the same date stating that we could possibly do with it and asking if he could suggest a remedy.  The answer came quickly ‘Stop it’  Very good said the Secretary just apply it to your own case.  In the end Finlayson promised to try his best to keep from it.”

After the players had gone it was resolved that Secretary should post a notice where the players could see it that it had come to the knowledge of the Committee that players had been the worse for drink and the trainer must report any one seen in this condition in the future.”

McCartney’s guarantee to keep from the drink did not last long as the minutes of the Special Committee meeting 2nd October 1895 shows.  Present were the entire committee, Messrs Barford, Barford, Bennett, Brown, Fryer, Pakes, Shackleton, Squires, Worsley, Warboys and Secretary and assistant.  –

“McCartney then came before the committee.  The Chairman severely reprimanding him for his conduct in the past few weeks.

There were three things he wanted from him to give special attention to viz. 1st, to be sure and not get too much drink.  2nd, to guard his tongue and refrain from talking about the players more especially in public places.  3rd, to put a cheque [check] upon using bad language.

McCartney promised to attend to these things and would abstain from drinking entirely.”

The issue came to a climax after a brawl in a Luton pub.  The committee meeting 8th October 1896 –

“Mr Barford reported that the following players had misbehaved themselves viz – Stewart, Docherty, Perrins, Galbraith and Davies and it was resolved that they should appear before full committee on Monday.” 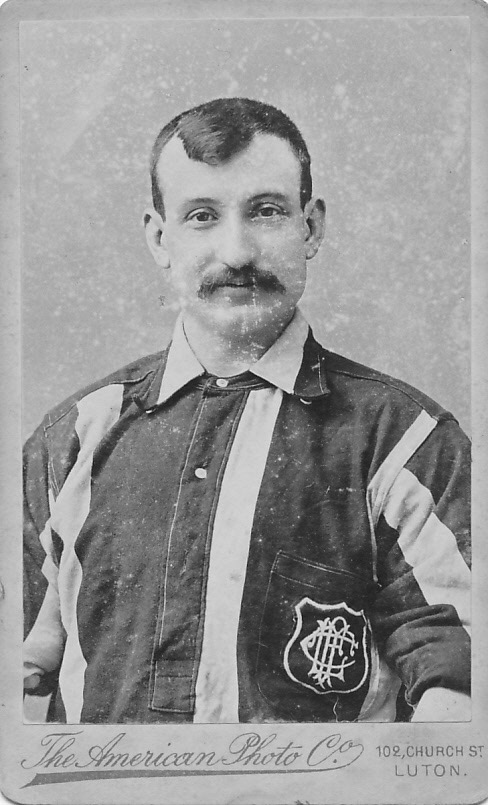 “Mr G.H. Barford reported particulars of players (Stewart, Galbraith [who looks very merry in the photo left], Perrins, Docherty, Davies)  misbehaviour after which these 5 players came before the committee and were addressed by the Chairman, who advised them to avoid public house brawls after which the players explained their case and promised not to offend again.”

There are no more mentions of drink in the club minute book so the pub fight was the end of it.  Around this time, the committee also granted the players permission to take light work as long as it did not interfere with football.  Many took up the work leaving less time for drink such as Hugh Galbraith who had his own hat factory for a time.  In addition, “boys will be boys” for only a certain amount of time. Their attention would move to other matters –  many of the players would meet [and many would marry] a Luton lass.