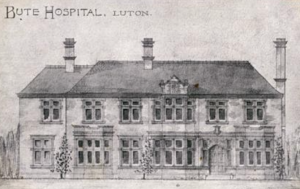 The Luton Reporter of the 11th October 1879 reported that a piece of land on Dunstable road was to be used for a new hospital for Luton.  The conveyancing was complete between the Marquis of Bute to The Mayor, Mr Crawley, Mr H. Brown junior, Mr Cumberland, Mr Sworder, Mr Kershaw and Mr Seebohm in trust.

The land was a gift but the town was left to raise the money for the building and its maintenance.  The Bute Hospital would replace the Cottage Hospital in High Town Road which had opened in 1872.

The opening ceremony was a major event and the town ground to a halt to watch the procession.  The streets were lined with large crowds who witnessed the colourful scene with the many banners of the Corporation, friendly societies and charitable associations involved – including the Freemasons, the Ancient Order of Foresters and the Odd Fellows Society.

The procession went around town and halted when the Mayor reached the door of the hospital.  Rev. J. O’Neill of St. Mary’s offered prayers.  The Hon. Secretary of the Hospital, Mr Ewen then handed the keys of the building to Mr Phillips, J.P. who made a long speech.  He congratulated the town on raising the money and giving the people a modern hospital that the town required.  The procession then went through the hospital and back to the Town Hall.

The Luton Reporter newspaper then describes the hospital –

“The building which supersedes the makeshift dwelling which has done such good service at High town, occupies a convenient and pleasant site on the Dunstable-road.  The land was given by the Marquis of Bute, who thus gracefully recognized his territorial and family connection with the Borough.  In consequence of this circumstance the institution has been named the “Bute Hospital” and the arms of the house of Crichton-Stuart occupy a prominent place and form a pleasing adornment in the front of the building.

Economy necessarily had considerable weight in the decisions of the committee, but it is satisfactory to find that in an institution of this public character the useful and the ornamental have been judiciously combined, and that the building designed by Messrs J.R. Brown and Humphreys is a welcome addition to the public attractions of the town.

The front of brick is broken by bow windows and relieved by dressings of Tower Hill stone.  A tasteful doorway leads to a spacious vestibule from which is entered a passage which runs the entire length of the building and divides the quarters of the patients from the domestic offices.  In front the hospital has the appearance of being two storeys high, but with the exception of three rooms on the first floor there is but one storey, an arrangement which enables the sick wards to be constructed with a due regard to height and facilitates easy lighting and ventilation. 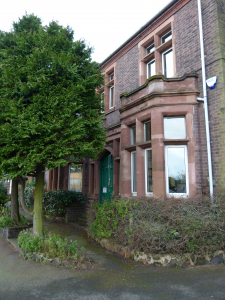 On entering the hall a comfortable matron’s room lies on the right and on the left is the operation room, with the propers offices and adjuncts.  The two main rooms on the hospital side are the wards for men and women.  The male ward is 28 feet long by 20 feet and 6 inches broad, and the female ward 28 feet by 23 feet.  These wards are separated by the nurse’s room, which is 13 feet by 10, and has a window on each side enabling her to overlook both wards.  Each of the wards contains six beds, so that accommodation is permanently provided for twelve patients, and more accommodation could be improvised if occasion demanded.  Although, of course, it is to be hoped that such a contingency may never occur, the connection of Luton with three important lines of railway renders it possible that such a disaster as the Arlesly accident may task the utmost resources of the new establishment.  In connection with these wards it may be mentioned that a happy thought has led to the erection of a verandah to each with a southern aspect, and a bench has been provided, so that nature may co-operate with science by giving opportunities for sun, changes of scene and fresh air.  The accident or special ward is conveniently situated close to the door, and in the rear of it are the kitchen and other offices, at the end of all being the mortuary.

On the other side of the building the convalescent ward, which is 17 feet 9 inches by 12 feet, is at the rear of the female ward and is open to the country on two sides.  The two principal wards are supplied with baths and other accommodation, and the appointments altogether are suitable and accessible.  The three rooms on the first floor comprise a committee or board room, the matron’s and another bedroom.  The building has been in hand a little over twelve months, and the work has been satisfactorily carried out by Messrs Smart Brothers, the contract price being £2,110.”

A luncheon followed in the large hall of the Free Library after which many long speeches were made.  It was revealed that the Oddfellows had donated £100 to the building of the hospital.  It was also mentioned that the Mayor, John Dawson, took a deep interest in the welfare of the town especially that of the working class who formed the majority of the town.  The day ended with a ballad concert at the Town Hall. 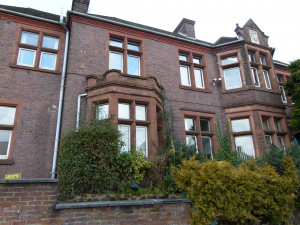 Note the plaque at the top of the building, below left.  This shows the coat of arms of th Crichton-Stuart familiy surounded by the Order of the Thistle. 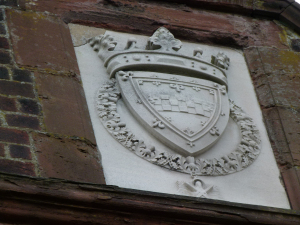 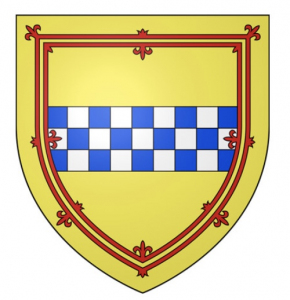 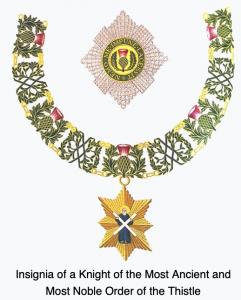 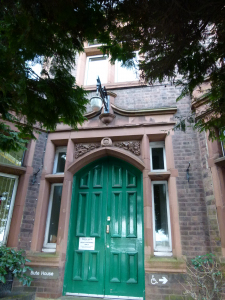 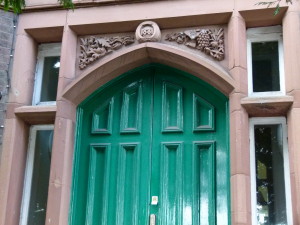 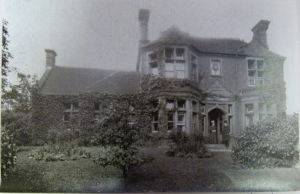 The colour photos were taken in February 2015.